Tipping in Ireland is a topic that causes a lot of confusion amongst those visiting Ireland for the first time.

Why the confusion? Personally, I blame it on travel blogs that claim that you have to tip for everything from a pint in a pub to a taxi ride. This isn’t true.

Tipping in Ireland, for the most part (there are exceptions – see below!) is entirely at your discretion – don’t be fooled into believing that you need to tip for everything and anything.

Some quick need-to-knows about tipping in Ireland 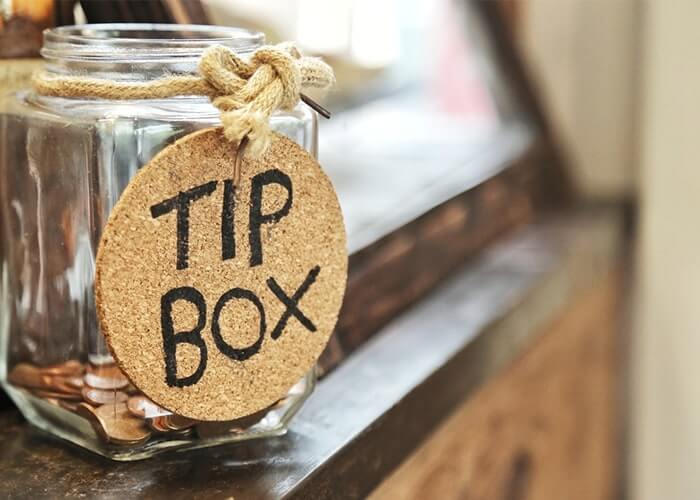 We get emails asking do you tip in Ireland 10 or 11 times a week. Here’s some quick info to get you up-to-speed:

Everything you read in this guide is based on my personal opinion/experience. I’ve lived in Ireland for 33 years and I’m telling you what I and many, many people I know do.

No, tipping in Ireland is not mandatory and we don’t have the type of tipping culture that you’ll find in the USA. If you’re visiting Ireland on a budget and cash is tight, don’t worry about it. If you can afford it and the service was good, it’s customary to leave a tip (in some situations – see below).

The most common places where you’ll leave a tip in Ireland is in a restaurant or in a pub if you’ve had a sit-down meal/table service. It’s also very common on multi-day tours.

4. It’s appreciated (most of the time)

Wages in many service industries in Ireland (e.g. waiters, barista, cleaners) are very low. And, considering the current rate of inflation, cash is tight for an awful lot of people. So, any cash you have to part with is generally appreciated.

5. When you shouldn’t tip

If the service is terrible you shouldn’t feel in any way obliged to tip (the exception here is if the people are apologetic, e.g. ‘Someone called in sick and we’re run off our feet!’). Another situation where there’s no need is if there’s a service charge included (check the receipt).

7. How much to tip in Ireland

How much to tip in Ireland varies depending on who you talk to. However, a general rule of thumb is 10% if there’s a small group and 20% if there’s a big one (see below).

In some restaurants in Ireland, if you visit with a big group (e.g. 10+ people) a service charge (usually around 20%) is automatically popped onto your bill as standard. If it hasn’t been added, add 20%.

Do you tip in Ireland? Situations when it’s customary (and ones when it isn’t) 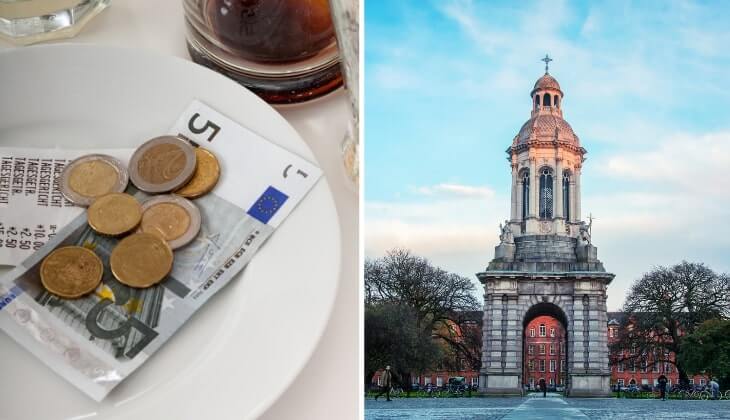 So, below I’m going to tell you what I do and don’t do when it comes to Ireland tipping practices.

This contradicts some of the more popular American travel blogs, but I’m basing the below on living here for 33 years.

We get asked do you tip waiters in Ireland a lot. The answer is yes, yes you do. However, as I mentioned above, if the service is terrible or if the service charge is included, don’t feel the need to.

Personally, I’d never tip a taxi driver in Ireland as taxis are generally very expensive. The only time I’d do it is if I only have cash and it’s just handier to round up the cost. If you want to, you can of course.

Another FAQ we get revolves around do you tip in Ireland if you’re taking multi-day tours. In this instance, what people tend to do, usually if there has been the same guide and driver for the duration, is that they’ll get each person to contribute €10 (or whatever they like) and give it to the guide at the end of the tour.

In some movies set in the states, you’ll see people tipping everyone from the bell boy to the receptionist. Tipping hotel staff in Ireland isn’t the norm, however, it is of course appreciated if you’d like to do so. The exception here is if you’re eating in the hotel restaurant. Personally, I usually leave €5 in the room for the person that cleans.

We’re often asked do you tip in Ireland every time you order a drink. No, you don’t. Now, there are a few exceptions when it comes to tipping in pubs in Ireland. The first, is if you’ve had a meal and you received good service.

The second is if you’re receiving table service. For example, if there’s a group of you sitting around a table having a chat and a someone working in the bar asks if you’d like some drinks brought over, it’s the norm to tip.

We’re often asked is tipping in Dublin different to tipping in Northern Ireland. This is a slightly bizarre question but it gets asked a lot for some reason. ‘Dublin tipping’ isn’t a thing – the culture around tipping in Ireland is the same in Dublin City as it is on the Antrim coast.

You can tip in Ireland with a credit card in many places. The only time, in my memory, that I haven’t been able to leave a tip with a card was on a recent trip to Connemara. It’s always a good shout to keep some change on you for situations like this,

FAQs about tipping in Ireland

If you’re in the middle of planning a trip to Ireland, visit our tourist hub – it’s packed with info on everything from renting a car in Ireland to the legal drinking age.

Or, if you’re still confused about Ireland tipping culture, ask away in the comments below. Here are some of our most FAQs:

Is tipping expected in Ireland?

Tipping (10% to 20% depending on the number of you) is generally expected in some industries. However, there are exceptions (see guide above).

When do you tip in Ireland?

You can tip anywhere, but it’s most common during sit-down service or more hands-on service, like a multi-day tour.

I have a group of six on a private tour, same driver for five days/four nights. What would be an appropriate tip?

Seen a question come up on travel sites about it being offensive to tip in B&B’s. Which seems odd to me. Any thoughts on this? I would assume you would, we did…

Hey! Although it wouldn't really be customary to tip in a B&B, people definitely wouldn't take offence! Hope the trip went well. Keith

Great information. We are travelling in September