If you’re in search of the best Irish beers, you’ve landed in the right place!

There’s some mighty Irish beer brands on the market today, however, a handful tend to get all of the attention.

So, the aim of this guide is to show your our favourites while also exposing you to some lesser known Irish beers. Dive on in!

What we think are the best Irish beers 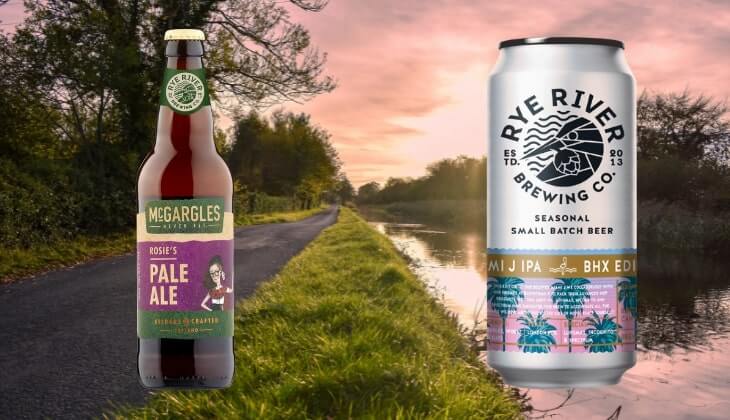 The first section of our guide is packed with our favourite Irish beer brands. These are Irish beers that we’ve had many (probably too many…) times before.

Below, you’ll find everything from Scraggy Bay and Guinness to some of the most popular beers in Ireland. 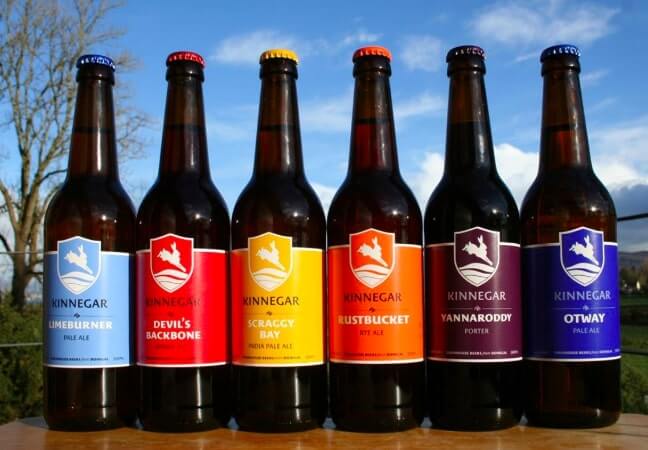 Although Scraggy Bay (the one with the yellow wrap above) isn’t one of the most popular beers in Ireland, it’s hands-down one of my favourites.

It’s made by a Donegal-based brewer called Kinnegar and it’s a mighty beer with a real kick to it (both in terms of taste and strength).

This is a fairly strong (5.3%), refreshing Irish beer that packs a punch. You may need to go digging to find this one, but if you like your Irish ales, it’s well worth searching for.

I always regarded Guinness as a stout, but they call it a beer these days, by all accounts. It has been brewed at St. James’s Gate in Dublin since way back in 1759.

If you’re reading this from outside of Ireland, the chances are you’ll be able to find Guinness on sale near where you live, as it’s sold in 100+ countries across the world.

It’s the most famous of the many Irish beer brands however, keep in mind that not all pints of Guinness are equal – you often need to to some digging to find a good one. This is the most popular beer in Ireland for good reason.

If you’re looking for the best Irish craft beers, give Rosie’s Pale Ale from the Rye Rive Brewing Company a bash.

Taste wise, this boasts a lovely balance of bitter citrus notes with a smooth caramelised palate. Strength wise, it’s 4.5% and it’s one of several Irish beers from the lads at Rye Rive well worth sampling.

This may be a little trickier for those of you across the pond to source, but it’s worth keeping an eye out for. 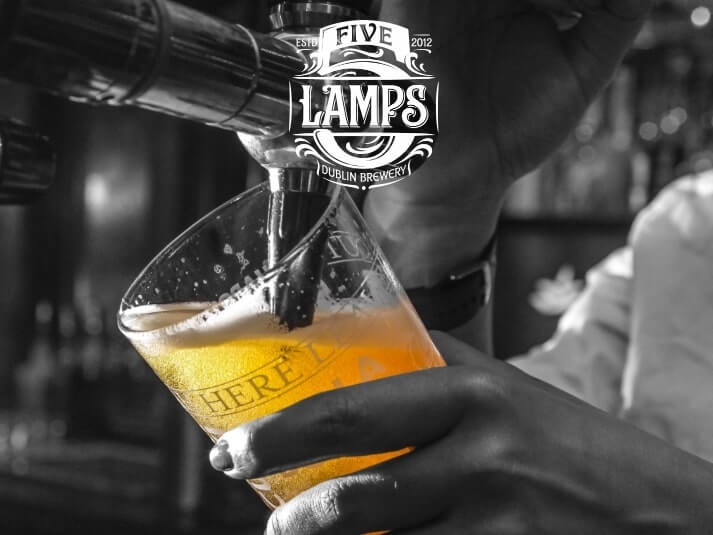 Photo via Five Lamps on FB

‘The Five Lamps‘ is also one of the newer Irish beer brands that opened up shop back in 2012. I went through a spell of drinking this back during the summer of 2017 and must make a point of sinking a few more soon.

There’s a nice strong twang to the Five Lamps beer, but it’s only 4.2% volume. This is ideal for drinkers like me who want something with a bit of flavour, but don’t fancy the hangover that drinking some mental 8.9% crafty Irish lager brings. 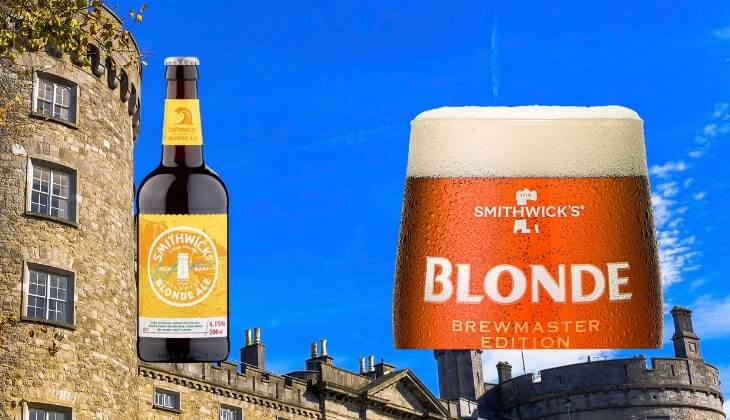 I was at a gig in Vicar Street a couple of weeks back and a bottle of this stuff caught my eye. I knew after the first sip that I’d be wrapping my fingers around plenty more of these in the years to come.

Smithwick’s Blonde is a crisp and ever-so-slightly citrusy Blonde Irish Ale that’s pleasant to sip and that leaves little to no lingering taste.

If you’re not familiar with the Smithwick’s brand, it was founded in Kilkenny in 1710 by John Smithwick and run until 1965 when it was bought by Guinness.

The second section of our guide looks at some of the best Irish craft beers on the market today, for those of you looking to try something different.

Below, you’ll find everything from the Wicklow Wolf to the Mescan Brewery along with some other mighty Irish larger brands. 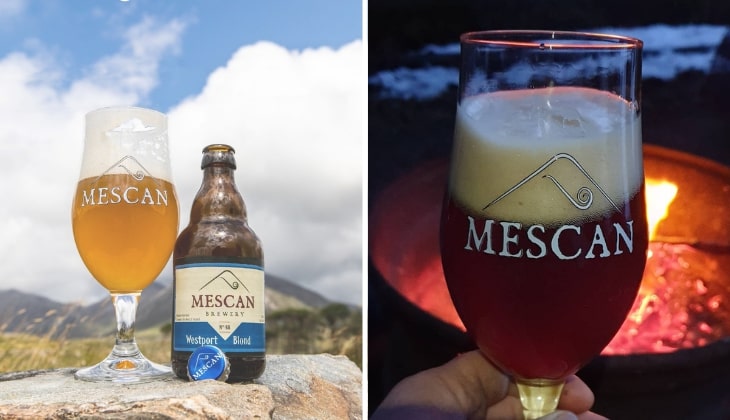 Photos via Mescan Brewery on FB

Now, this Irish beer was given to me as a gift by a friend from Westport last year. When I opened up the box and peered in, I assumed that it was something crafty from overseas… I was wrong.

Mescan Brewery can be found on the slopes of Croagh Patrick in Mayo and it’s owned and run by two Westport vets, interestingly enough.

There are several different beers from the lads at Mescan that you can sip away on. I tried the Westport Blonde. The only issue I had was that there was only one bottle of it in the little gift set.

The water used in the Mescan beers comes from deep beneath Croagh Patrick via a spring near the brewery, which is pretty damn cool. 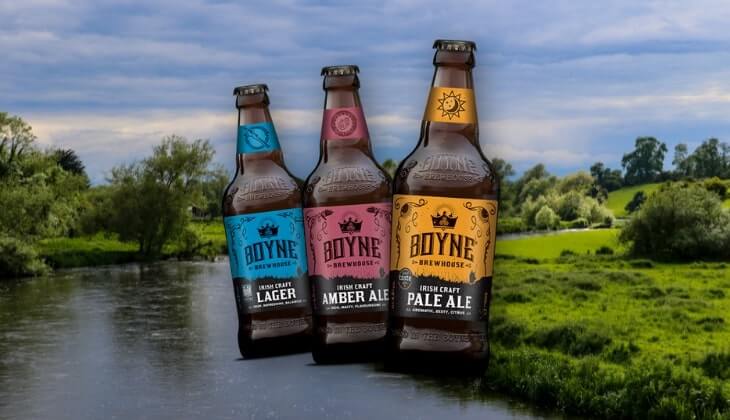 Mainly because they offer such a huge choice. There’s a heap of different beers produced in the brewhouse and they tend to be on sale in most off licences and supermarkets. 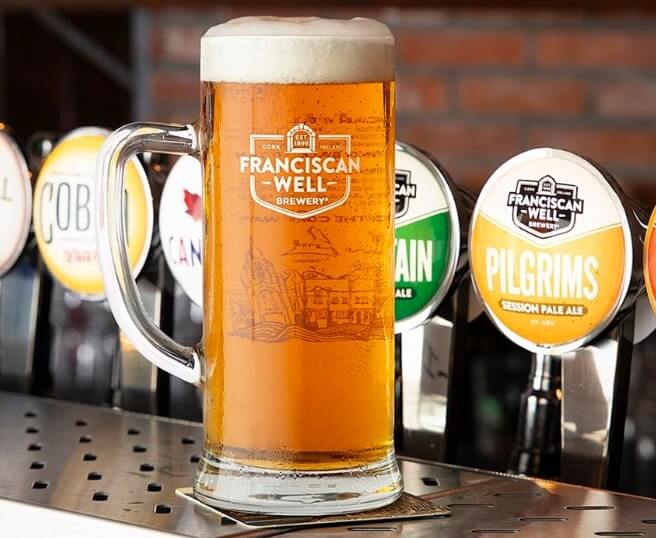 This is another one that can lamp you out of it with a hangover if you’re not careful. If you’re not familiar with the Franciscan Well Brewery, it’s one of Ireland’s longest established and most respected craft breweries.

You’ll find it in Cork where it also has a class pub attached to it. The cream of the crop (in my opinion) is the Franciscan Well Friar Weisse.

This is a German-style unfiltered wheat beer that has a fair bit of zest to it. If you’re looking for a good Irish beer that packs a punch, give this a go. 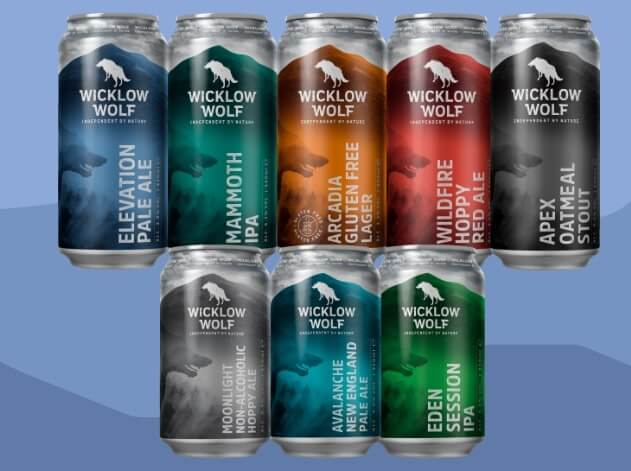 Photos via the Wicklow Wolf on FB

As I was researching for our guide to the best Irish beers, I came across Elevation Pale Ale (4.8) from the Wicklow Wolf.

I was, if I’m honest, a bit wary as it was described on their website as an, ‘incredibly drinkable Pale ale bursting with juicy fruits of pineapple and grapefruit’, and I’m not big on fruity beers.

However, this is a very drinkable Irish ale and there’s a nice kick to it. If you’re looking to try a few different flavours, the Eden Session and the Mammoth are also pretty good! 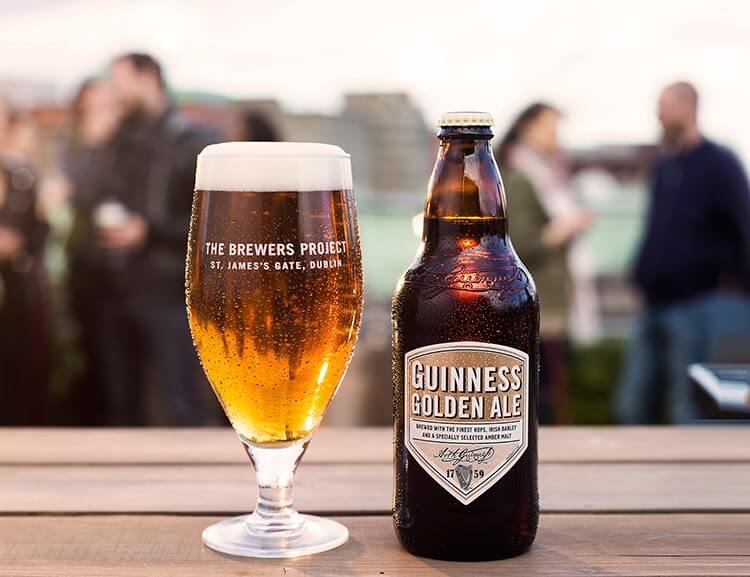 The final section of our guide to the best Irish beers looks at some of the most popular beers in Ireland, many of which are available ‘across the pond’.

Below, you’ll find everything from O’Hara’s and Kilkenny to some classic Irish larger brands. 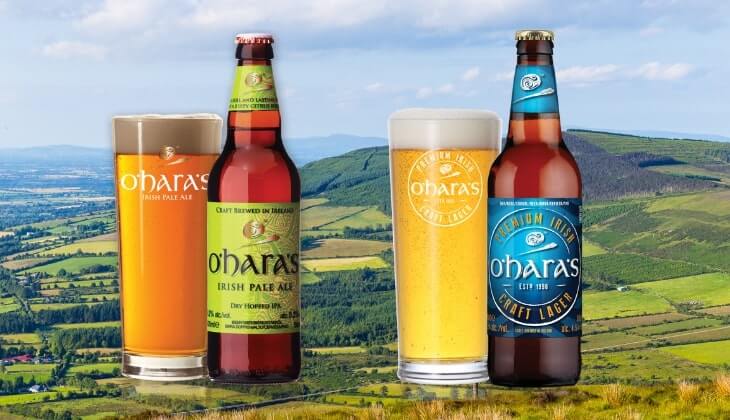 My God let me start this one with a disclaimer – while O’Hara’s do a very tasty Irish ale (5.2%), drink ’em slow and knock back some water as you go (that unintentionally rhymed…).

One of the worst hangovers that I’ve ever had came after knocking back 5 or 6 of O’Hara’s Irish beers at a wedding a few years back. This IPA combines the balance of European IPAs with the dry hopping of American pale ales.

Expect zesty notes and a bitter finish. Hangover aside, this is a great Irish beer that’s well worth tucking into. 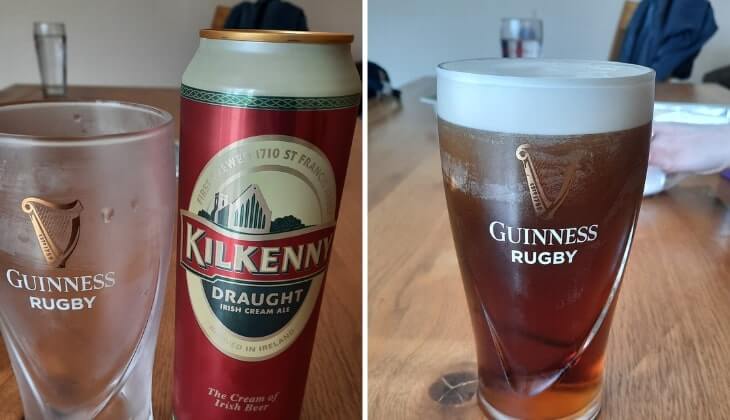 I’d heard a lot of chatter about Kilkenny Irish cream ale over the years, but I was always a little bit wary of tasting it, as people tend to describe it as an Irish ale with a Guinness head…

It wasn’t until 5 or 6 years ago that I gave this a lash for the first time in a bar in Cork. I was pleasantly surprised, and I’ve had it many times since.

Kilkenny is an Irish cream ale that began its life in the St. Francis Abbey Brewery in Kilkenny. It has a nitrogenated cream head, similar to that on a pint of Guinness.

Harp was one of the most popular beers in Ireland back in the day and their ads are something of legend. It gets a bit of a bad rep from some people, but it’s a solid drop when served cold on draught.

Harp is an Irish lager that was created in 1960 by Guinness in its Dundalk brewery. Although Harp is a top Irish beer in some parts of Ireland, it can be tricky to pick up elsewhere.

Give it a lash if you see it on tap. It tends to be pretty good value for money, too, if my memory serves me.

Next up is the relatively new Guinness Golden Ale. I was given a handmade gift set with a bottle of this as part of a secret Santa present a while back, and it was surprisingly good.

The one thing that’d put me off buying it is the price – a bottle of it starts at around €3.25, which is steep (prices may change).

Guinness Golden Ale is brewed up using Guinness yeast, Irish Barley, hops, and amber malt. If you’re looking for light Irish beers that are pretty easy to drink, give this a crack. 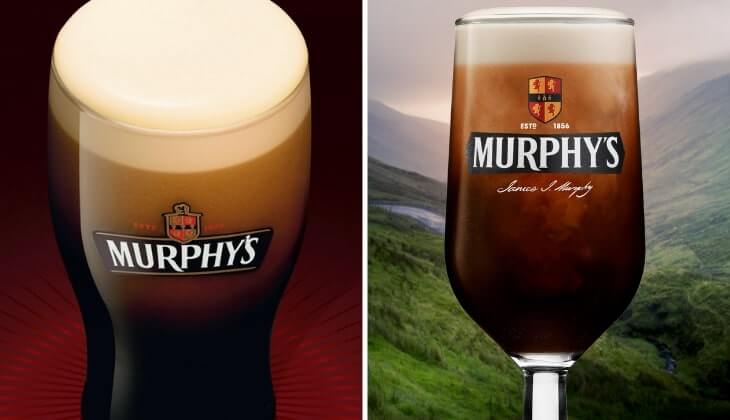 OK, Murphy’s is an Irish stout, but I’m including it here to hopefully help some of you realise that there’s more to Ireland than Guinness!

Murphy’s originated in Cork and dates back to 1856. I’ve found this hard to come by where I live (Dublin), but it’s sold widely in Cork.

This stout is only 4% proof, so it’s pleasant to drink and leaves very little after taste. I have a few cans of this stuff in the fridge, and it’s pretty decent out of a can, too!

FAQs about the best Irish beers

We’ve had a lot of questions over the years asking about everything from ‘What Irish larger is the tastiest?’ to ‘What beers in Ireland are a must try?’.

What is the best Irish beer to try this weekend?

Personally, I like Scraggy Bay and Guinness, but McGargle’s, Mescan and Five Lamps are all popular beers in Ireland worth trying.

What Irish beer brands are great but less known?

Although Murphy’s, Smithwick’s and the Wicklow Wolf are popular Irish beer brands, they’re not well known outside of Ireland.

I am having an affair at the church for St. Pattys day. Where can I buy a god selection of Irish beers in the Washington DC area

Great info and many to look for over here in the US as inspiration for our holiday next year.

Is there any good online companies that deliver pale ales/ craft beers?

Looking to get new ones (that can’t be got in my local offo) as part of my partners bday present. Tia

I'm not sure to be completely honest with you! I took a ramble down to our local Aldi there last Friday and tried a beer from an Irsh brewery called Brown Bear.

The head was hopping the next morning but it was tasty!

Hi Keith, Thanks for the article! Do you know any Irish beers or breweries with a dog in the name?