When I started drinking alcohol as a teenager, I used to favour Irish cider. I found it easier to stomach and it was generally cheaper than beer.

Back then, my cider of choice was some dodgy one from Dunne Stores that used to cost £3 for a big chonker of a two-litre bottle.

My fondness for cider continued into my early 20s. Then, when we’d drink in pubs, I’d always opt for pints of Bulmers / Magners cider. It was this period of drinking that led to me dodging cider for 8 or 9 years.

That’s what 50+ apple induced hangovers will do to you.

Then, during a heatwave last summer, I took a notion and started buying Irish cider once again. Below, you’ll find what are, in my opinion, the best ciders on the market in Ireland today. 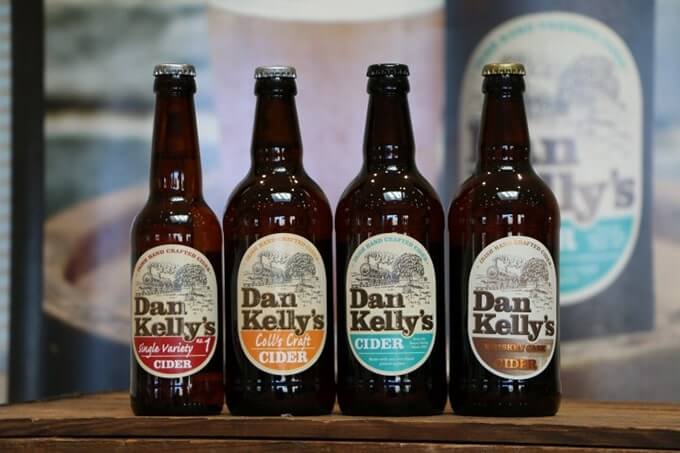 I’m going to kick things off with an Irish cider that I drank a good load of last summer when we had a nice little bit of a heatwave in mid-June.

Dan Kelly’s cider is made in the mighty Boyne Valley and comes in at 4.5% ABV. Now, I’ve tried a couple of the ciders from these lads and the tastiest, hands-down, is their Irish Whiskey Cask Cider.

This cider is fermented in Bourbon casks for 6 months and then matured for 12. All of the apples used during the process are handpicked from their own orchids. Well worth sampling a bottle or three.

We’re off to Nohoval – a gorgeous little corner of Cork that’s home to Stonewell Cider – next. Interestingly enough, the well used in the production of this cider has been in use since the 16th century.

The folks behind Stonewell buy in apples from farmers in Tipperary, Waterford, Kilkenny, Carlow and, of course, Cork, to produce a traditional Irish cider that ticks all of the boxes.

Five different types of apples are used to make these carefully created ciders. According to the makers, ‘Stonewell is Ireland’s ONLY Supreme Champion premium cider. Made with ONLY fresh apple juice by a small team in Cork, Ireland, it is free of all artificial additives & colourings.’ 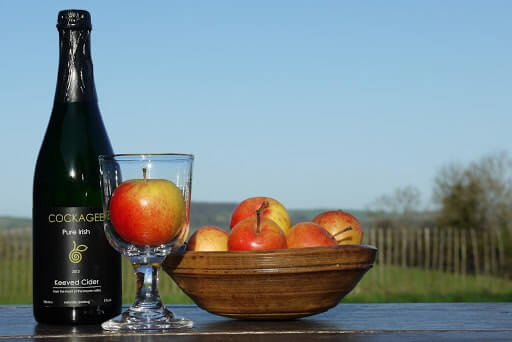 If you’re in search of an Irish craft cider with a very unique name and a flavour that’ll get your lips smacking, look no further than Cockagee Cider (5% ABV).

This cider is produced in Meath and it’s one of a very small number of cider producers in Ireland that use the ancient keeving method of fermentation.

If you’ve never heard of Keeved Cider, it’s a naturally sweeter (no sugar or additives used – only cider apples) sparkling cider that’s popular in many places in north-western France.

Cockagee Cider boasts rich fruity flavours with a soft natural sparkle and a long dry finish. This isn’t a cider that you’ll be drinking by the pint – it’s recommended that you drink it as a ‘local replacement’ for prosecco or champagne.

If you read our guide on the best things to do in Armagh, you’ll know that Armagh is known as “Orchard County” because of the many apple orchards that it’s home to.

One of these orchards is run by the Armagh Cider Company. They produce several different ciders but the cream of the crop, in my opinion, is their Mellow Cider.

Madden’s award-winning Mellow Cider is made from apples that grow on the makers home farm at Ballinteggart in Armagh where the same family have been nurturing orchards for generations.

This cider is made from fresh-pressed apples and, like Cockagee above, contains no artificial ingredients. Well worth trying.

Now, if you’ve read our guide to the best Irish beers, you’ll have heard me say that I’m not overly fond of the Rockshore Beer. However, their cider is pretty damn tasty.

One of my friends randomly won a crate of Rockshore Cider (4% ABV) last summer in a raffle at his local GAA club and we spent a long afternoon and evening working our way through it.

Brewed at St. James’s Gate (yes, the home of Guinness), this cider is light and crisp and it’s nice and easy to sip away on. One of the things that I most like about this one is that you’re not left feeling like you have to brush your teeth 20 times after drinking it.

It’s sweet, yes, but not overly so, like many ciders out there.

Orchard Thieves, like Rockshore, is a newcomer on the Irish cider scene. Now, to be honest – I don’t like Orchard Thieves. It’s way too sweet for my liking.

With that being said, it’s being included here as many cider drinkers are fond of it (many… definitely not all!). This cider is made by Heineken and tastes a little like Cidona (an apple soft drink).

Since we published this guide, we’ve had a handful of emails from Americans asking where Orchard Thieves can be bought in the United States. It’s not available at the moment, although you can sign this petition if you fancy.

Have you had a cider recently that you want to shout about? Should we have added in Bulmers / Magners Irish cider? Let me know in the comments below!

The next road trip you venture on you should get a taste of Press House, West Cork Cider. A real full flavour Cider that isn't watered down, comes in at 5.8% so mind yourself! All in all though, a great cider to gulop in the sun or sip by a fire ☺

It’s almost criminal to have a list of ciders without including McIvors and Cronins cider. Obviously with a small list it will be difficult but Cronins cider if you can find it is one of the best ciders out there for sure!

Possibly the best two ciders that I have tasted in my 53 years of cider drinking both here and in the UK are Longueville House cider and McIvors cider fry Armagh. Both are stunning ciders.

I found Magners Pear Cider a couple years ago and I love it! I haven't been able to find it since the pandemic started and am looking forward to it being available again.

Decent list. Agreed, I used to be fond of Orchard Thieves when it was available on draught in a lot of my locals, but ever since Rockshore arrived, they’ve been getting rid of it, and for the better. Appleman’s and Rockshore completely took over my liking for Orchard Thieves. Appleman’s is probably my favourite Cider now. Think Orchard Thieves and Bulmers but not as sweet nor as dry. Bit like Rockshore, only slightly higher alcohol content.