there are LOADS of things to do in Armagh, so why do so few people add it to their Ireland itinerary?

In the guide below, we’re going to obliterate the shite (yes, the shite) out of any misconceptions you had about Armagh.

Why? Because there are lots of counties in Ireland, like Armagh, that don’t receive their fair share of attention and coverage, both online and offline.

Does that mean they’re not worth visiting? Of course not!

So, in the guide below, we’ll be giving you everything you need to plan out an adventure, food, and (if you drink) pint-packed weekend in Armagh.

What you’ll get from the guide below

If there’s somewhere we’ve missed that you feel should be included, pop a comment in the comments section at the end of this article.

Ready to rock? Let’s dive in!

1 – Grab a coffee and a bit of brekkie in Embers 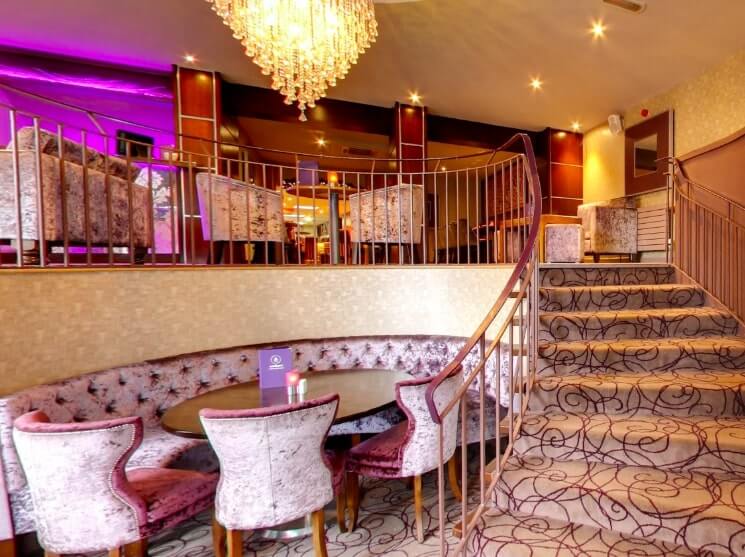 You can’t bate a good breakfast.

So, our first stop of the day is Embers on Market St. for a big ass feed and a slurp of coffee.

Those that tip into Embers can expect an affordable, relaxed, casual dining experience, all courtesy of husband & wife duo John and Sarah Murray.

The pair bring over 20 year’s experience to the table (pun game on point…) so you’re guaranteed top-notch service and a happy belly.

2 – Step back in time at Navan Fort 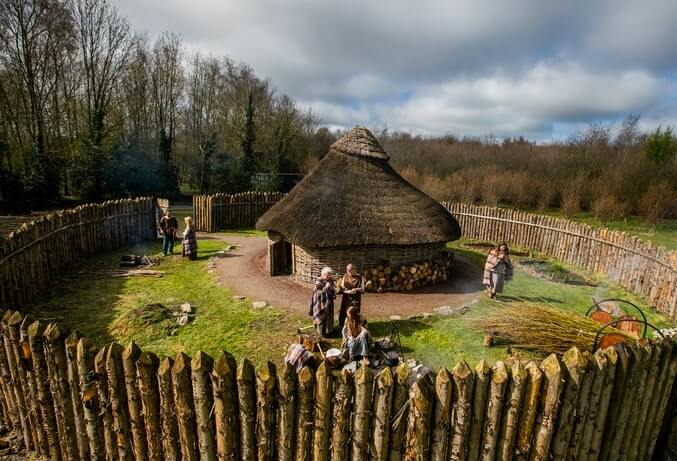 The site, like many of the places covered in our guide on 41 deadly things to do in Louth, is linked in legend with the tales of Cúchulainn.

According to Visit Armagh, ‘the ancient goddess of war and fertility, scored the earth with her brooch pin and traced the famous outline of this sacred stronghold of the hero Cu Chulainn, home of the famous Red Branch Knights and Ulster Cycle of tales.’

Visitors to Navan Fort can enjoy a condensed exhibition that delves into the background of Navan, an audio visual show that brings the myths & legends of the Ulster Cycle to life, and much more.

3 – Spin along the Slieve Gullion Scenic Drive (hands-down the best thing to do in Armagh, in my opinion) 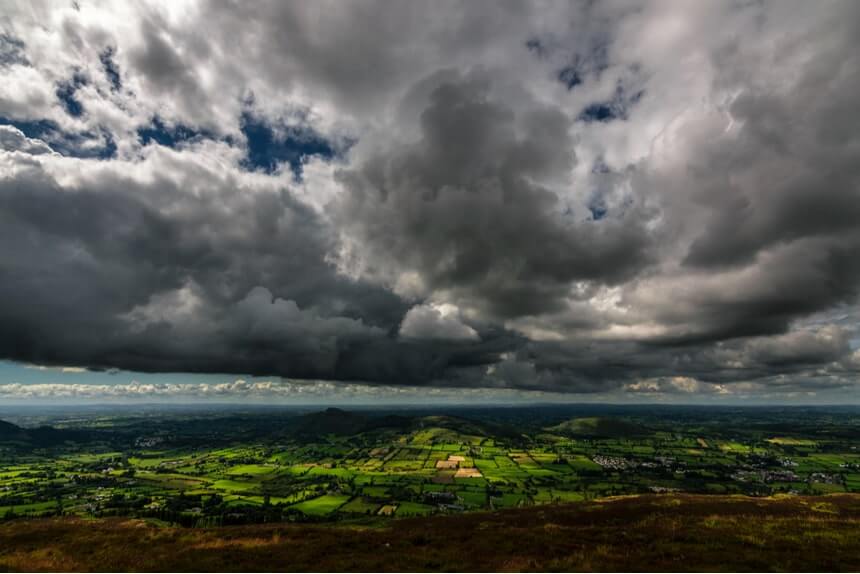 I’ll have to do a separate, more detailed guide to the Slieve Gullion Drive as it genuinely is one of my favourite drives in Ireland.

I’ve taken this spin 3 times over the past couple of years and I’m already itching to get back.

The Slieve Gullion Drive treats you to a view that to be honest, I can’t even begin to describe in words.

Those of you that visit Slieve Gullion Forest Park will be treated to seemingly endless tranquil woodland trails along with stunning views out over the Ring of Gullion, Mourne Mountains, and Cooley Peninsula.

Traveller tip: if you’re looking to see patchwork-like green fields similar to the ones you’ll see when flying into Ireland on a clear day, visit Slieve Gullion Forest. It’s UNREAL!

4 – Plan your trip around the Armagh Food and Cider Festival

I’ll raise my hands up right now and admit that I’ve never heard of Armagh being referred to as ‘Ireland’s Orchard County‘.

From Thursday 19th to Sunday 22nd September, Armagh goes cider mad, with an extravaganza of events taking place in venues right the county.

Visit the Armagh Food and Cider Festival to immerse yourself in everything from cider discovery dinners and tastings to day-retreats and flash fiction. 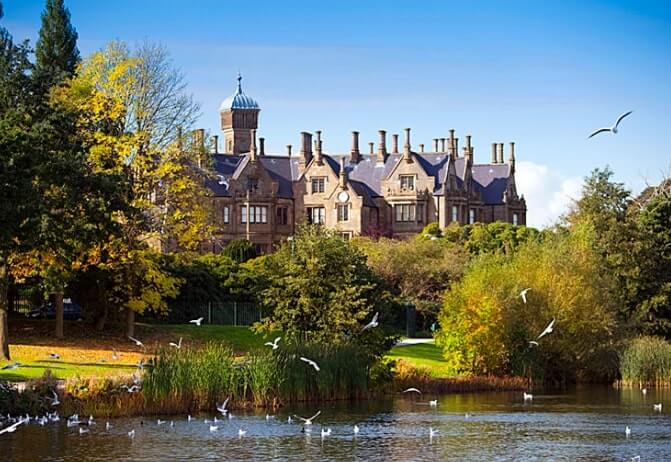 The biggest park in Ireland is the Phoenix Park, which you’ll know already if you read our guide to 90+ of the best things to do in Dublin.

Armagh’s Lurgan Park slots in right behind in the number 2 spot.

Visited by as many as 2,000 people every weekend, the park here is beautifully maintained and perfect for an early morning walk or run.

If you’re in search of things to do in Armagh that lean more on the adventerous side, you can rent . rowing boat and hit the lake.

6 – Give glamping a lash 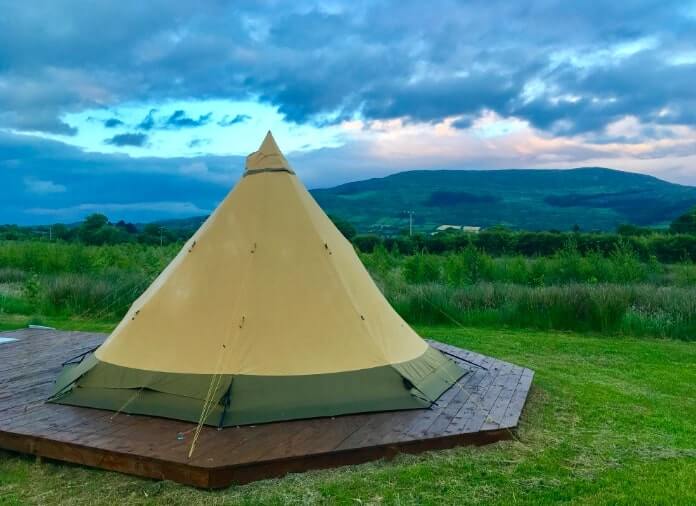 The best places to stay in Ireland are those that offer a grand aul view.

If you also fancy sleeping somewhere a little bit quirky, then a bit of glamping in Armagh will be right up your street.

At Blue Bell Lane in South Armagh, you’ll camp in an area of outstanding natural beauty, all from the comfort of a pre-pitched tipi tent.

You can kick back for the evening and gaze out at a chunk of the Ring of Gullion in the background. 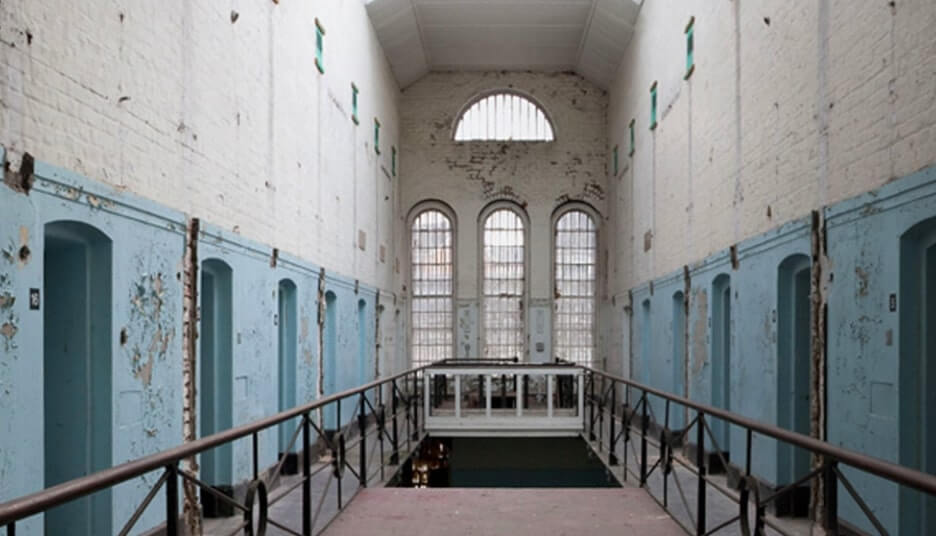 On the homepage of the Armagh Gaol website, it says that they’re not taking tours at the moment, yet when you visit the tour booking page, they’re accepting bookings…

Strange. If you’re planning a visit, just double-check in advance before booking online.

The Armagh Gaol dates back to the 1780s.

It closed its doors as a working prison in 1986 and has since been earmarked for a major redevelopment. Unfortunately, it sounds like the Gaol is going to be turned into a hotel at some point in the near future.

A tour at the Gaol (if it is running…) takes visitors through the history of the Gaol, which includes women and children being imprisoned and executions that took place on the grounds.

Note: If the tour isn’t running and you’re mad to visit a Gaol, visit the Crumlin Road Gaol in Belfast. Check out our guide to the best things to do in Belfast for more.

McConville’s pub in Armagh has been stood proudly on the corner of Portadown Mainstreet since the 1800s.

The story goes that some of the Russian oak fixtures in the pub were replicated from a design on Titanic.

9 – Nip into the Armagh Robinson Library 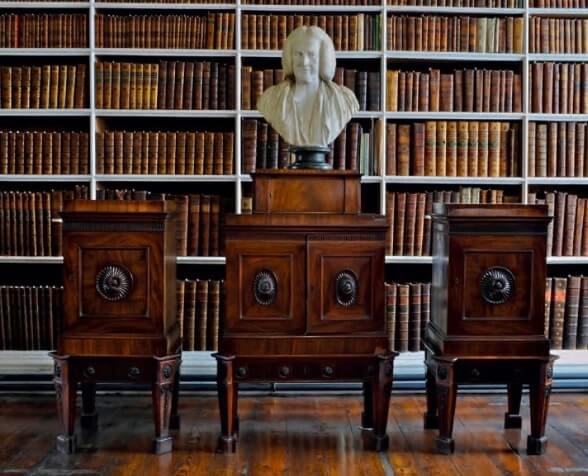 A visit here is like stepping back into the 18th Century!

The Library, which was founded by Archbishop Robinson to display his own collection of books and fine art, is home to many rare and beautiful books.

While the library has over 42,000 printed works resting on its shelves, it’s Jonathan Swift’s own copy of Gulliver’s Travels, from 1726, with corrections written by himself, that steals the show.

Traveller tip: A visit here is one of the best things to do in Armagh when it’s raining!

10 – Take a tour of a working Orchard 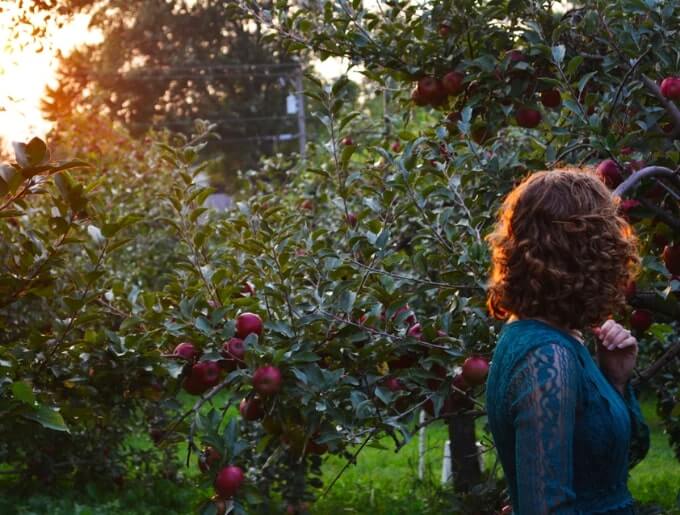 Photo by Marissa Price via Unsplash

If you visit this website frequently, you’ll know that I’m constantly banging saying that the best things to do and places to visit in Ireland are those that take you a little off the beaten path.

If it’s a completely new experience, then even better!

A tour of a working orchard is a very unique tour, to say the least.

The lads at Long Meadow Farm offer a fully guided tour (it only takes place at certain times of the year, so check in advance) that’ll take you on a journey through their orchards.

You can explore their cider-making facilities, sample our award-winning Irish ciders, and see the pressing and blending facilities up close.

There’s also tea, coffee, and APPLE TART to be sampled! 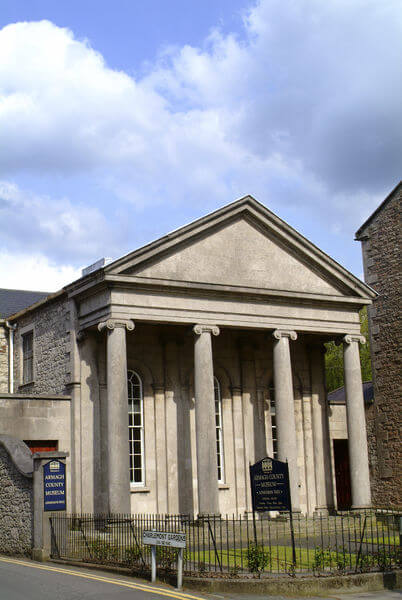 Armagh County Museum is the oldest county museum in all of Ireland.

Set in a gorgeous Georgian tree-lined mall near the centre of St Patrick’s Cathedral, this museum’s architecture makes it one of the most unique and distinctive buildings in the city.

It opened its doors to the public back in 1937 and since then, its collections have showcased centuries of stories of the people who lived, worked and had connections with Armagh to the world.

Visitors to Armagh County Museum can check out everything from military uniforms and natural history specimens to railway memorabilia and an impressive art collection.

12 – Test your nerve and give ziplining a crack 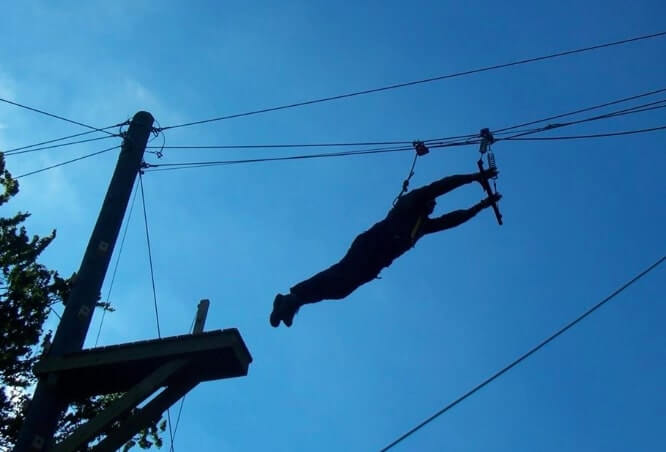 I really need to give this a lash.

If you fancy testing your nerve during your trip to Armagh, take a spin out to Lurgaboy Adventure Centre.

It’s on this 35 acre site that you’ll find one of Irelands longest Zip Wires which stands at 400m.

You can also try your hand at coasteering, mountain biking, archery, Rock Climbing, and more. 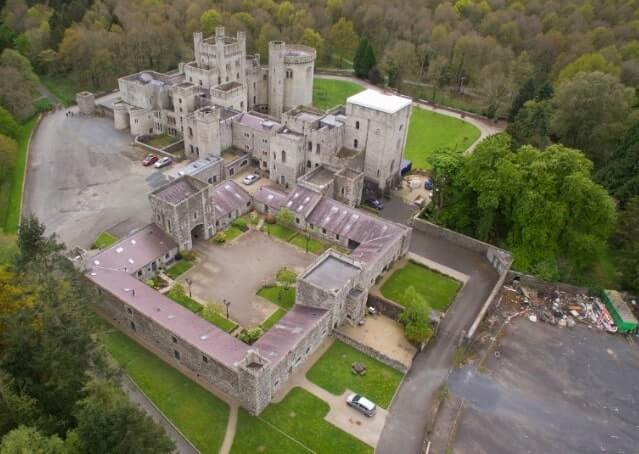 YES, there’s a castle in Armagh that featured in HBO’s Game of Thrones.

Gosford Castle was used as the House of Tully in the hit show and it was here that certain dark events took place, including the beheading of Rickard Karstark.

The 200+-year-old Gosford Castle and Forest Park, which was sold in 2019, is one of the biggest castles that was ever built in Ireland.

There are 4 different walks you can do in the grounds here, each of which is signposted.

Traveller tip: Keep an eye out for the red deer and longhorn cattle that live in the grounds.

14 – Get cultured at F.E. McWilliam Gallery and Studio 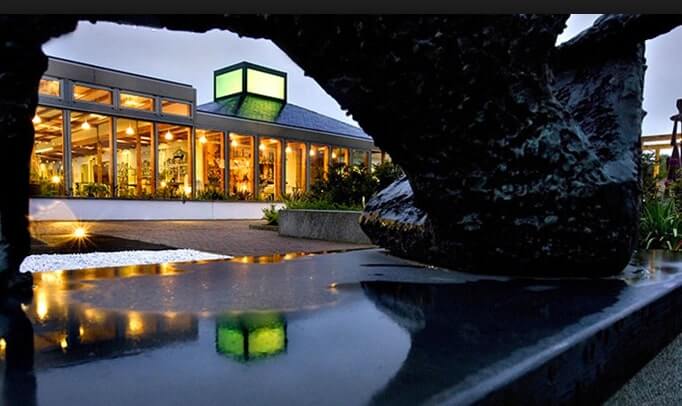 The beautifully designed F.E. McWilliam Gallery and Studio is dedicated to the memory of sculptor Frederick Edward McWilliam, one of Ireland’s most influential artists.

Inside, you’ll find a permanent display of McWilliam’s work along with temporary exhibitions of Irish and international art.

There’s also a cafe if you’re just looking to take a weight off and have a yap for an hour or two. 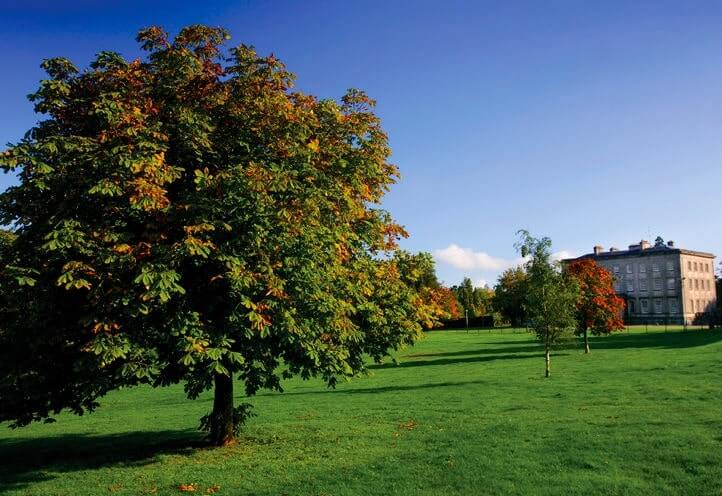 When I’m visiting a city, I tend to spend a bit of time in advance scoping out places to walk that lie a bit away from the hustle and bustle of cars and people.

This place looks like just the ticket for a ramble while visiting Armagh.

The Demesne, which boasts over 300 acres, is an impressive 200 years old.

There are several different walks around the Demesne, each of which varies in terms of distance and efforts needed.

Traveller tip: Grab a coffee in the Moody Boar (it’s on the grounds) and head off on a ramble. 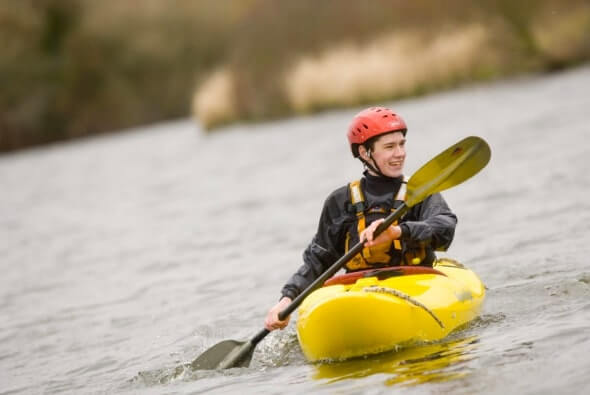 Photo via Get Active ABC

I love the idea of just hopping in a kayak and heading out on the water.

If you’re looking for things to do in Armagh and this tickles your fancy, then head to to see the lads at the Craigavon Watersports Centre on Craigavon Lakes.

Here, you can hire an open canoe, a stand-up paddleboard or a kayak and head off for a paddle on the lake.

17 – Visit St. Patrick’s Cathedral… both of them 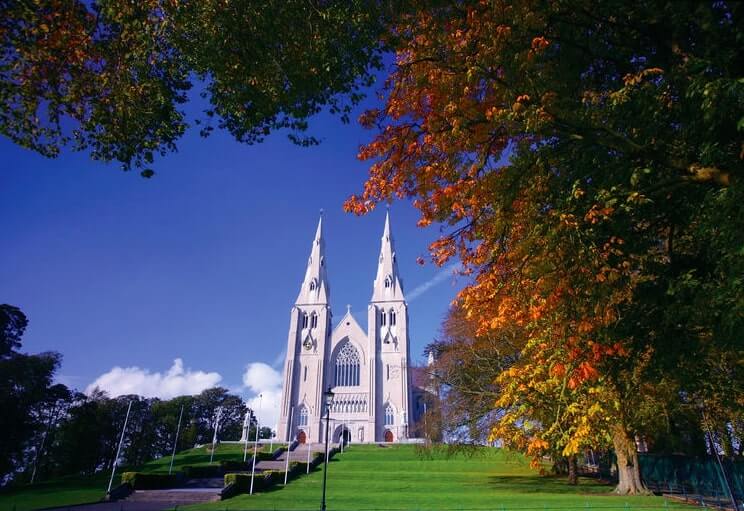 If you’re looking to explore the world of St. Patrick, then Armagh is the best place to start your journey.

When he first visited Armagh, he referred to the city as his ‘sweet hill‘.

It was here, in 445AD, that he founded his first large stone church. Now, there are two cathedrals in Armagh bearing the name of Ireland’s patron saint.

The first is the Church of Ireland cathedral located on Sally Hill. The second, the twin-spired Catholic St Patrick’s Cathedral, can be found on the opposite hill.

Two mighty pieces of architecture with a heap of history behind them. 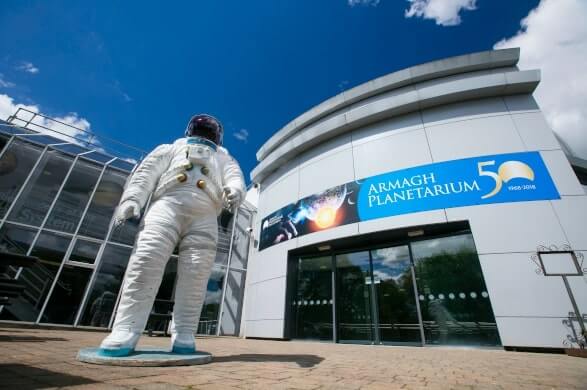 OK, OK… I lied (I’ve had about 7 cups of coffee today and I’m on a serious comedown… gimme a break!)

You won’t find aliens at Armagh Astronomy Centre and Planetarium.

What you will find is a digital theatre where you can explore the wonders of the universe, the largest meteorite in Ireland, scale models of probes, and loads more.

A visit to this place is perfect for those of you looking for things to do in Armagh with kids.

Related read: Check out our guide to 59 of the best places to visit in Northern Ireland.

What things to do in Armagh have we missed?