If you’re looking for things to do on New Year’s Eve in Dublin in 2019, then you’re in the right place.

Now, I need to be honest from the get-go – I hate NYE. I always have and I likely always will. No idea why. I just do.

With that in mind, I’ve tried to fill this guide to New Year’s Eve in Dublin with a mix of activities, that’ll hopefully help you fight boredom come December 31st.

This guide is packed with slightly non-traditional NYE activities that’ll appeal to:

NYE is too often associated with big crowds, messy drunks, and wedged pubs, so we’ve added in just as many non-boozy ideas as boozy ones. 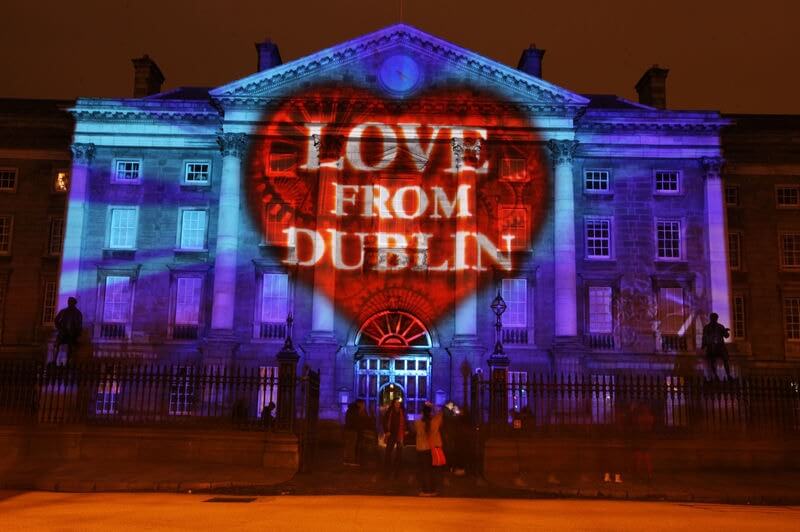 1.  Brave the Forty Foot and earn your NYE pint

Feeling hardy? Or looking to banish a hangover? Get yourself out to Sandycove to the Forty Foot.

If you’re not familiar with Dublin’s Forty Foot, it’s a former nude beach that was immortalised in Ulysses.

It’s also a fine spot for a dip if you’re brave enough to hop into the icy water.

2. Head for an early morning ramble at Ticknock

Get yourself out of the nest early and head out to Ticknock for a ramble. The views around here are sensational and the walk isn’t overly challenging.

Perfect for those of you looking to do something active to kick-start your New Years Eve in Dublin.

3. Or grab breakfast in Howth and do the cliff walk

Another solid option to kick-starting your NYE in Dublin is with an early morning visit to the little seaside town of Howth.

Grab a feed in Marie Louise Tea Rooms (near the harbour) – the coffee and breakfast here are cracking – and then head up to Howth summit and do the cliff walk.

Here’s a full guide to the Howth Cliff Walk that you can dive into.

4. Spend the night with the crowds at the Dublin New Year’s Eve Concert 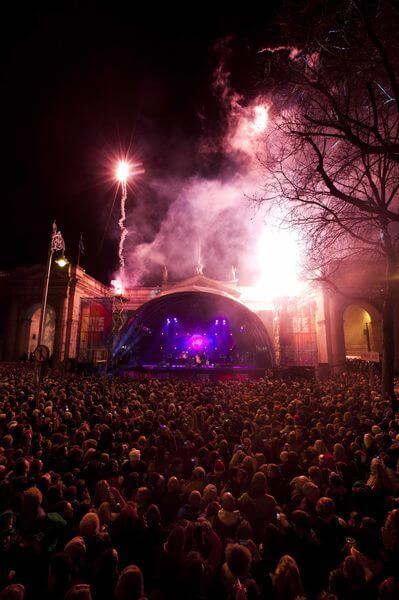 I went to this once (the year Kodaline played) and I’d never go again (it rained and it was messy AF).

BUT, if you’re looking for a bit of outdoor music, Dublin’s New Year’s Eve concert has a pretty decent line-up for 2019, with Walking On Cars headlining.

If you want to go to this, book tickets in advance.

5. Indulge in something sweet from Le chocolat de Frèd and walk along Dun Laoighre harbour

I’ve a friend that lives out in Dun Laoighre that rants and raves about Le chocolat de Frèd.

Now, he mainly yaps away about the coffee, but the sweet stuff these lads sell looks twice as nice.

Grab a waffle or a crepe to-go and eat it as you walk down towards and along Dun Laoghaire Harbour.

6. Head for a coffee and a walk around a castle in Malahide 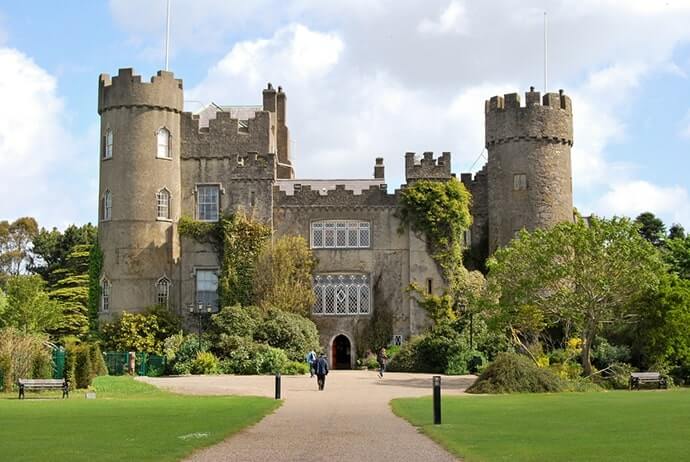 Here’s another one for those of you looking for a bit of early-morning rambling.

Head to Malahide Castle and grab a coffee from the cafe on the grounds (it’s an Avoca and the queue system is… mental).

You can then head off on a little ramble around some of the 260 acres of lush parkland.

The castle itself dates back to the 12th century and while you can do a paid tour, if you like, the walk around the grounds is worth the visit alone. 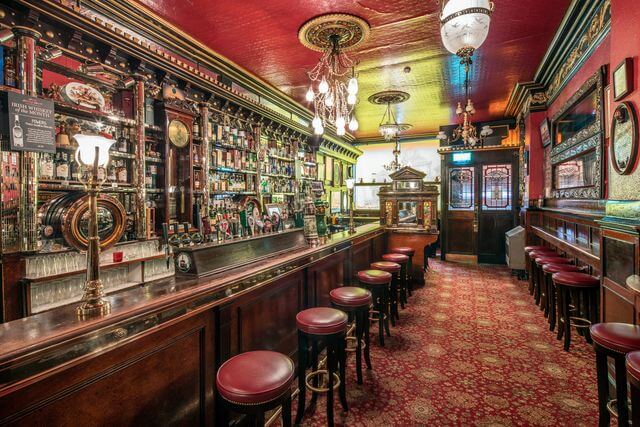 If you fancy a few pints but want to avoid the crowds and messiness that’ll arrive later in the evening, make your way into town in the early afternoon.

Dublin is home to a clatter of historic pubs (here’s a guide to the best pubs in Dublin with bucket-loads of history) that serve a mighty pint.

The Long Hall, Neary’s, McDaid’s, and Mulligans are just a handful of pubs where you can catch up with friends over a few pints. You can make an early exit from town then before the festivities begin.

8. Go to the New Year’s Eve Light Show at the Custom House 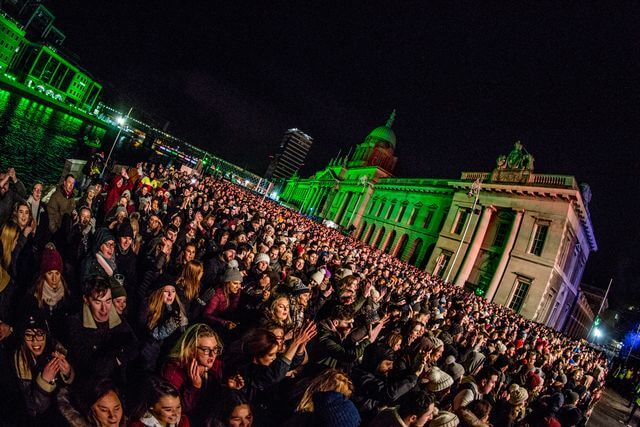 If you’re in search of another organised event for New Year’s Eve in Dublin, the Liffey Lights Midnight Moment is a solid option.

This event takes place next to Dublin’s Custom House and visitors can expect a spectacular solar symphony of lights with up to to 100 aqua beams, lasers and searchlights set to dance across the night sky.

9. Visit the Glasnevin Museum (and nip into the Gravediggers for a pint after) 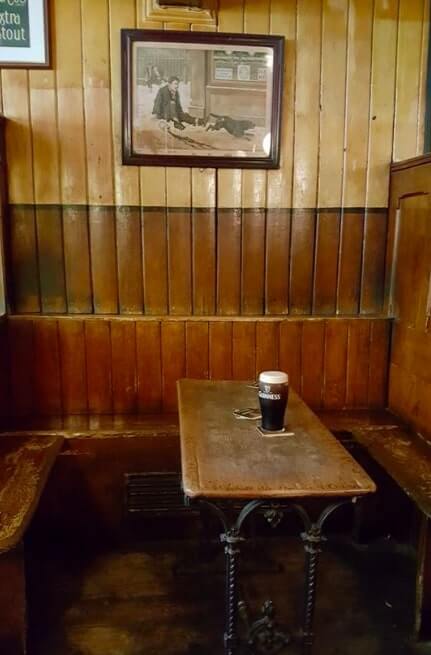 A visit to the historic Glasnevin Museum is arguably one of the best things to do in Dublin.

Since way back in 1832, over one and a half million people have been laid to rest in Glasnevin Cemetary.

Glasnevin is the ideal destination for those of you looking to explore the legacies of many of Ireland’s heroes, from Daniel O’Connell and Michael Collins to Charles Stewart Parnell, Countess Markievicz and many more.

When you finish, nip into the nearby John Kavanagh’s pub (The Gravediggers) for one of the best pints of Guinness in Dublin.

10. Get a mighty view of Dublin on Croke Park’s Skyline Tour

This is another handy little activity for those of you looking to do something non-drink related on New Year’s Eve in Dublin.

The Croke Park Skyline is Dublin’s highest open-viewing platform. As you ramble around it, you’ll be treated to breathtaking views of Ireland’s capital.

I’ve checked and this is open on NYE. There’s also plenty of places to eat nearby in Drumcondra if you’re feeling peckish after.

So, this is arguably the most unique thing to do in Dublin on New Year’s Eve.

If you’re after a slightly quirky activity, the lads at City Kayaking will be operating on December 31st.

Those that give this a lash will embark upon a kayak experience thorough Dublin City centre with local guides. There’s also a unique tour where musicians join and play music under the city’s bridges (hit play above).

12. Get a ridiculous view out over Dublin at the Hellfire Club

This is another non-drink related activity for NYE.

The Montpellier Loop Trail (AKA the walk up at the Hellfire Club) is a lovely Dublin walk that’ll treat you to a gorgeous view out over the city.

This walk takes just over an hour (depending on fitness levels/pace) and brings you up Montpelier Hill to the ruins of a haunted lodge.

Related Read: Check out our detailed guide to the Hellfire Club Walk.

Have another recommendation for things to do on New Years Eve in Dublin?

Pop it into the comments section below and I’ll take a look.