The Hellfire Club Walk (more officially known as ‘the Montpellier Loop Trail’) is one of the more popular Dublin Walks.

This is a leisurely walk (depending on fitness levels) that takes you up Montpelier Hill to the ruins of a supposedly haunted lodge.

There are two routes to tackle and they vary in length (1 – 1.5 hours) and difficulty and each climaxes with a unbeatable view out over Dublin City.

In the guid below, find info on everything from the Hellfire Club car park to the story behind the abandoned hunting lodge.

Some quick need-to-knows about the Hellfire Club walk 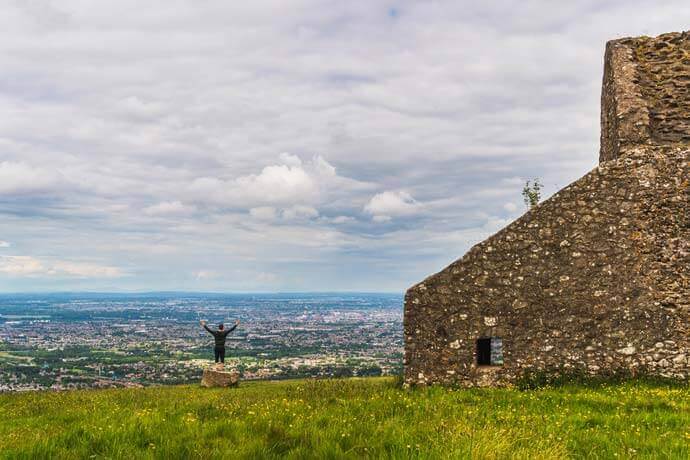 Although a visit to Montpelier Hill is fairly straightforward, there are a few need-to-knows that’ll make your visit that bit more enjoyable.

The Hellfire Club car park can be found here on Google Maps. Now, a warning: if you visit on a Saturday or Sunday morning, this place can be mobbed, so try and arrive early. The car park is open 7am – 9pm (Apr to Sept) and 8am – 5pm (Oct to Mar).

There’s a good aul incline to be tackled on both of the Hellfire Club Walks. I’ve done the shorter walk many times and there’s always a good bit of huffing and puffing en route to the top. A moderate level of fitness is needed.

5. Getting there by bus (warning)

You can (I wouldn’t!) get the number 15 bus from Dublin City out as far as Ballycullen Road (Stop 6282 – see route). The big issue here is that it’s then a 45-minute walk to the start of the Hellfire Club Walk, along a narrow and debatably dangerous road. I’d recommend grabbing a taxi to and from the car park for safety.

The story behind the Hellfire Club in Dublin 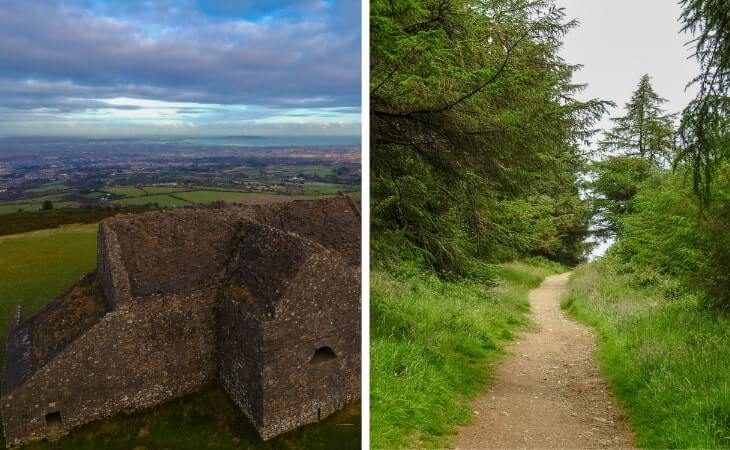 One of the attractions of the Hellfire Club Walk is the legend tied to Montpelier Hill. At the top of the hill lies the ruins of a very old hunting lodge.

The lodge was erected by R.H. Connolly, Speaker of the Irish House of Parliament, as a shooting lodge, around 1725.

There’s many a legend associated with the Hellfire Club in Dublin (a couple of which are similar to the story of the haunted Loftus Hall in Wexford).

After Connolly died, the lodge fell into disarray. According to legend, it soon became the meeting place for a group known as ‘the Irish Hellfire Club’. The club was formed in 1735 by a lad named Richard Parsons, a known dabbler in dark magic.

There was a lot of secrecy surrounding the club members and this led to speculation that they were Devil-worshipers. This probably wasn’t helped by the fact that the clubs president used to wear horns, wings, and hooves.

The most widely known Hellfire Club story is the one where the Devil himself appeared. A stranger joined the club one evening to play a game of cards.

At some point during the game, one of the players dropped a card on the floor. As he bent down to pick it up, he noticed that the stranger had cloven hooves instead of feet.

There are many stories surrounding how the building ended up in its current state, with many accepting that it was ravaged by fire at some point.

One story explains that the lodge was set alight when the owner refused to renew the lease. Another tale says that it was destroyed during a fight when one member poured brandy on another and set him alight.

An overview of the Hellfire Club Walk 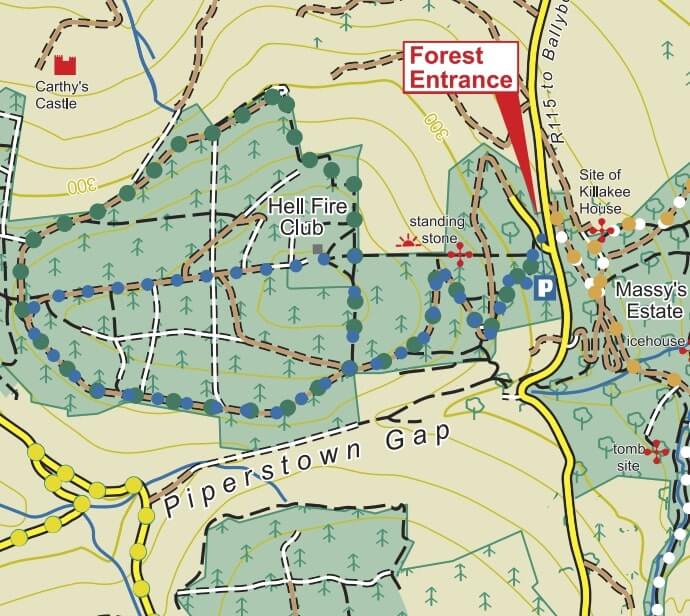 Map via the Dublin Mountains Partnership

So, you’ll kick-start your ramble in the Hellfire Club car park. There’s a little coffee van selling hot drinks (during the summer) and ice cream.

You’ll easily be able to spot where the trail begins, so head off on your merry way and follow the trail that winds around Montpelier Hill.

What to look out for

After around 10-15 minutes you’ll cop a steep gravel path up to your right. This is the quick way to the top of the hill.

If you’re stuck for time, you can head up this way (be careful after rainfall) and you’ll reach the top in under 10 minutes.

Getting into the belly of the walk

After a bit more walking, you’ll meet a split in the road. You’ll want to go left here, regardless of which trail you’re doing.

After a while, you’ll get a gorgeous view out over the Glenasmole Valley. Keep on going and you’ll reach another split in the road.

Take a right to follow the shorter, blue route to the Hellfire Club and continue straight for the longer walk around the hill to the summit.

When you reach the climax of the Hellfire Club Walk, you’ll be treated to an unbeatable view out over Dublin City.

If you fancy, you can also go inside the Hellfire Club itself for a nosey around (there’s two floors – mind your step).

Places to visit near Montpelier Hill

One of the beauties of the Hellfire Club Walk is that it’s a short spin away from many of the best places to visit in Dublin.

Below, you’ll find a handful of other very popular walks a stone’s throw from Montpelier Hill. 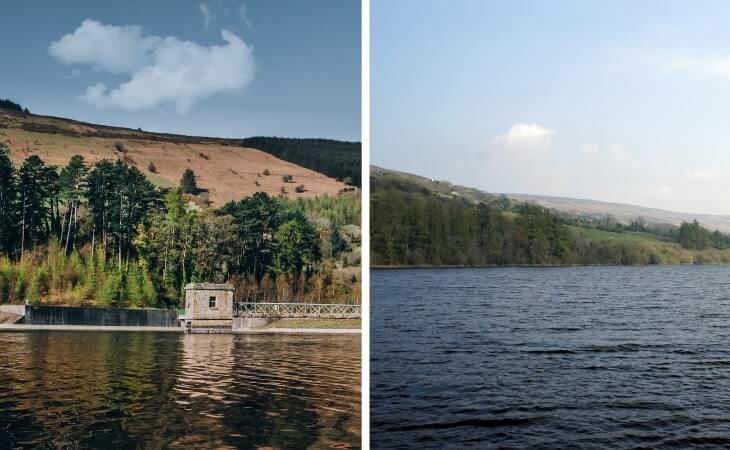 Bohernabreena Reservoir is one of the most overlooked walks in Dublin. It’s a short drive from Montpelier Hill and there’s a lovely 1 to 1.5 hour walk here. There’s also a new car park (paid). 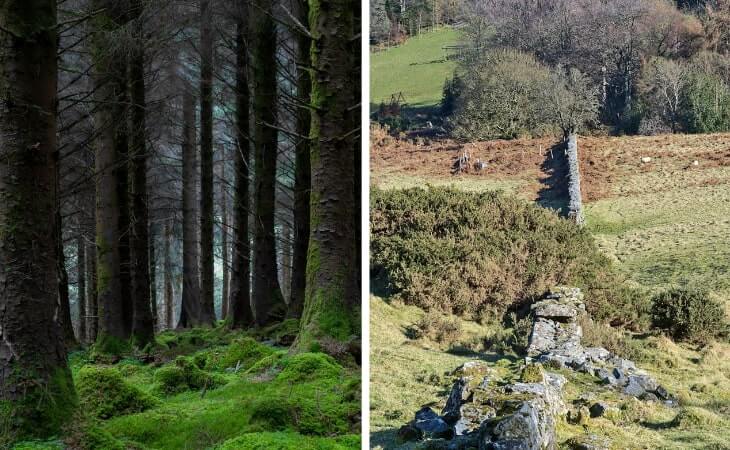 The Cruagh Woods walk is another ramble in the Dublin Mountains that’s well worth doing. It’s only down the road from Montpelier Hill and it’s a much quieter stroll than the Hellfire Club Walk. 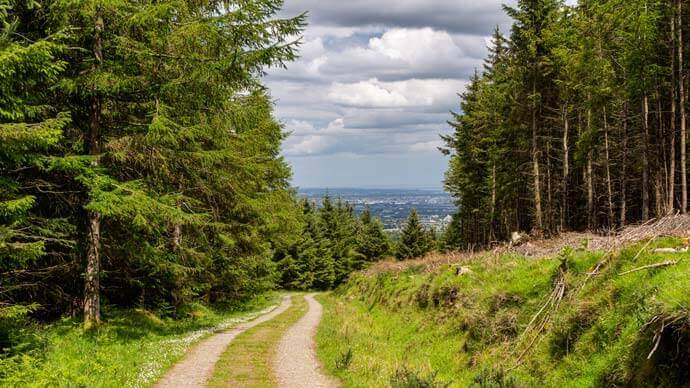 The Ticknock Walk and the Tibradden Woods Walk are both well worth doing. However, as is the case with the Hellfire Club, parking can be an issue at the weekends. Try and get here early!

FAQs about the Hellfire Club hike

We’ve had a lot of questions over the years asking about everything from ‘How do you get there by bus?’ (yes, see guide above) to ‘Is the walk buggy friendly’ (not really).

How long is the walk to the Hellfire Club?

What’s the story with the Hellfire Club car park?

There’s a dedicated Hellfire Club car park that’s open 7am – 9pm (Apr to Sept) and 8am – 5pm (Oct to Mar). It gets busy at the weekends, so arrive early.

Me And My Mum Went On A Paranormal Ghost Tour Up At The Hellfire Club In Dublin At Night A Couple Of Years Ago, Was A Steep Hill To Climb And Was Also Creepy In The Dark But Was Definitely Worth It!

Really Enjoyed Learning The History Of The Place.

i was up there some years ago. it is a steep climb, but well worth the view. have to say as night fell it was creepy, and lends to the legend.