You can’t hear the word Guinness and not immediately think of Ireland.

The king of Irish beers, Guinness has a long and interesting history, starting with a small brewery in Dublin, which thanks to time, innovation, and hard work became a multi-million dollar company.

Below, you’ll discover everything from the history of Guinness and what it tastes like to facts, figures and more.

Some quick need-to-knows about Guinness 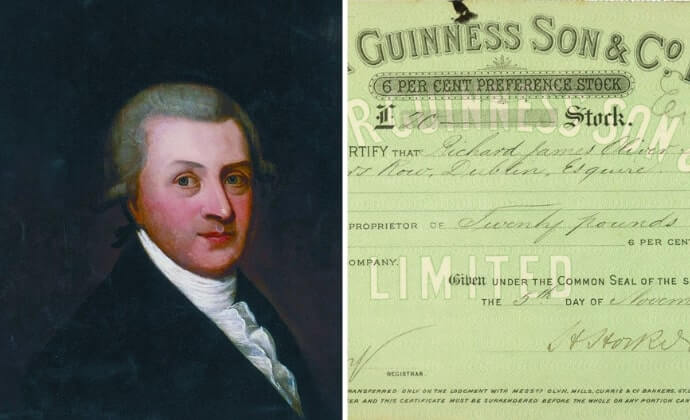 Before we dive into the guide, take 20 seconds to read the points below as they’ll get you up-to-speed quickly:

1. Where it all began

Guinness was founded in 1759 by Arthur Guinness in Dublin. Originally, the Guinness Brewery (St. James’s Gate Brewery) was a small brewery producing a variety of ales and beer, however, in the 1770s Arthur Guinness began exclusively producing porter.

The brewery in Dublin has been the home of Guinness since its founding, thanks to Arthur Guinness signing a 9,000-year lease with an annual payment of £45 a year. However, despite its impressively long length, the lease is no longer in effect, as the company bought the land later on.

Guinness has a hoppy bitter taste mixed in with a malty sweetness, with notes of chocolate and coffee. You can taste the roasted flavour of the barley coming through, and overall, the palate is creamy and smooth.

The original Guinness brewery is at St. James’s Gate in Dublin. It’s still in operation today, and on-site, the Guinness Storehouse is a tourist attraction with seven floors of Guinness history, tasting experiences, and several bars.

The history of Guinness 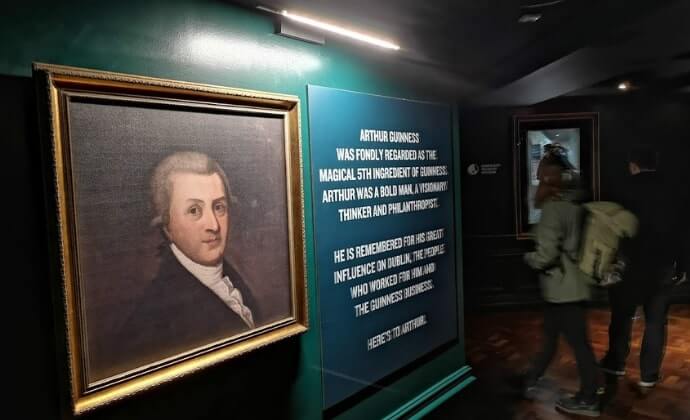 Guinness was founded in 1759 when Arthur Guinness leased a small brewery, St. James’s Gate Brewery in Dublin, and signed a legendary 9,000-year lease.

The brewery began by producing a range of beers and ales and quickly became successful, exporting to England by 1769. In the 1770s, Arthur Guinness began brewing “porter” a new type of beer invented in 1722.

By 1799, Guinnness’ porter was so popular that he decided to focus on it exclusively. He brewed several types, including a special “West India Porter” that is still brewed today and known as Guinness Foreign Extra Stout.

Arthur Guinness passed away in 1803, leaving behind the brewery to his son, Arthur II. Thus began a brewing dynasty, with the business being passed from father to son for five generations.

During his time, Arthur II transformed the St. James’s Gate Brewery into the largest brewery in Ireland! He expanded the business’ export trade, and by 1820, the brewery was shipping to Lisbon, New York, South Carolina, Barbados, and Sierra Leone.

Arthur II’s son, Benjamin Lee, took over the business in the 1850s, introducing the first trademark label in 1862. Thanks to the brewery’s success, the Guinness family gained status in society and Benjamin Lee became the Lord Mayor of Dublin in 1851.

In 1869, Benjamin Lee passed away and Edward Cecil took over the business. Under his leadership, the St. James’s Gate Brewery became the largest in the world and the first major brewery to be incorporated, with Edward Cecil as Chairman.

The end of the 19th century saw Guinness selling 1.2 million barrels a year. The brewery had grown to 60 acres and had its own railway and fire brigade. The employees were amongst the highest paid workers in Dublin with a range of employment benefits.

Related read: See our guide to what makes a good pint of Guinness.

In 1901, the brewery established a laboratory to use scientific experiments and methods to enhance the brewing craft. Edward Cecil passed away in 1927, leaving his son Rupert as Chairman.

Under Rupert’s leadership, Guinness launched their first brewery overseas in London in 1936. They also ran their first official ad campaign in 1929, a break from the company’s usual word-of-mouth advertising.

Rupert’s Grandson Benjamin became Chairman in 1962 and was the last of the Guinness family to hold a chairman position (until 1986).

The 20th century was a hugely busy period for Guinness, with the launch of a new product “Draught Guinness” launched in 1959; a complete overhaul of the existing brewery to metal equipment; and new breweries launched in Nigeria (1962), Malaysia (1965), Cameroun (1970), and Ghana in (1971).

In 1997, Guinness Plc and Grand Metropolitan Plc merged in a £24 million deal to form a new company Diageo Plc. By the end of the 20th century, Guinness was brewed in 49 countries and sold in over 150.

Related read: 7 beers like Guinness worth sampling this weekend

In 2014, Brewhouse 4 opened in St. James Gate. It’s a state-of-the-art brewery, and one og the most environmentally sustainable and most technologically advanced in the world.

Guinness is as popular as ever, with 10 million glasses drunk every day throughout the globe.

Related read: See our guide on how to get Guinness on tap at home.

How Guinness is made 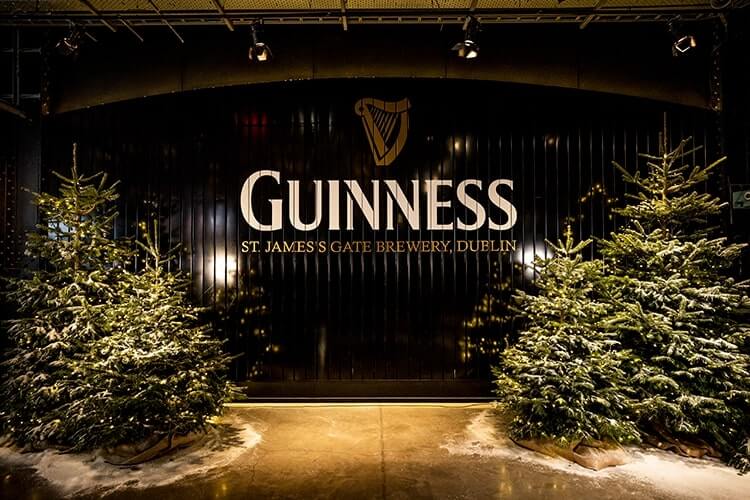 As is the case with everything from Irish whiskey and Irish cider to Irish gin, Irish stout and poitin, the process that goes into the making of Guinness is a lengthy one.

Making Guinness starts with malted barley, grown by local Irish farmers. The malted barley is crushed by the brew house mills, then combined with heated waters from the Poulaphouca Reservoir.

This new mixture is mashed to extract the brewing sugars, then dropped into a mash tun to separate the liquid (“sweet wort”) from the grains.

Hops and roasted barley are added to the sweet wort to balance and enhance the flavour (Guinness has twice the amount of hops than most other beers, giving it an intense taste!).

The sweet wort is boiled for 90 minutes, then left to cool and settle.

The fermentation stage is extremely special, and the Guinness yeast strain has been passed down from generations, with a portion kept under lock and key in case something happens to the main supply.

The yeast is added to the sweet worst, then everything is left to mature.

Since 1959, Guinness has been using nitrogen for storage. This innovation is what gives the beer its creamier and smoother consistency and taste VS traditional carbon dioxide methods. It also makes canned Guinness taste just as good as draught!

We’ve had a lot of questions over the years asking about everything from ‘Is it bitter?’ to ‘How is a good pint poured?’.

What is the story behind Guinness?

The Guinness story began in 1759 with a man named Arthur Guinness in Dublin. From a modest beginning at St. James’s Gate, the Guinness brand grew into the world’s biggest beverages.

Which country is the origin of Guinness?

Guinness was invented in Ireland and, while it is now brewed in many other countries, the Emerald Isle is its home.

Does the Guinness family still own Guinness?

In 1997, Guinness PLC and Grand Metropolitan PLC merged to form Diageo PLC. It’s said that the Guinness family own a 51% stake in the brand.

Is Guinness only made in Ireland?

No. Guinness is now brewed in 49 counties across the globe and it is said to be sold in over 150 different countries.