If you’ve ever wondered how to get Guinness on tap at home, this guide should tickle your fancy.

I’d been following the All Things Guinness account for a good while when, one night, during the lockdown, I saw the person behind the camera pouring a fat creamy pint.

‘Eh, shtory here?!’, I thought. Then, in the photos that followed, it became clear that it was a home bar with a mighty setup.

So, I fired a message off and asked if they’d fancy sharing how they built their home pub from scratch… and here we are.

How to get Guinness on tap at home

@allthingsguinness is run by Franz who initially came up with the idea of building a home bar when he and his wife moved into a new apartment.

When they finished moving all of their stuff in, they realised that there was going to be one large corner left empty.

According to Franz, “I had this crazy idea of having a little Irish Pub corner and suggested it to my wife (thinking she‘d say no). Surprisingly she said yes! Later on, she‘d tell me she said yes because she thought I‘d never do it! Haha!”

The steps involved in building the home pub 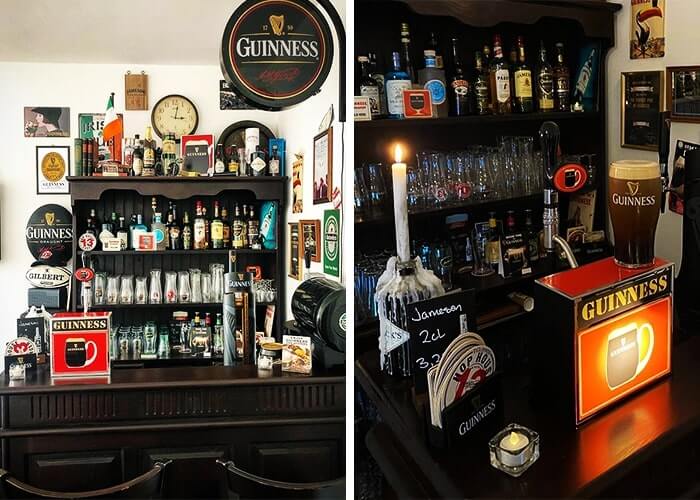 There were, unsurprisingly enough, a good few phases that Franz had to go through to build the fine setup that you see above.

Below, you’ll find a breakdown of the steps that he took to build his bar along with how to get Guinness on tap at home.

Step 1: Deciding if you actually have space

A big blocker for many looking to build a home pub is going to be finding adequate space; you don’t want the bar to be cramped, but you don’t want it taking up a whole room, either.

Franz was moving from a small apartment into a bigger one and he ended up with more space than he counted on.

Step 2: A good wallop of research

After deciding that he was going to build the bar, Franz knew that he’d have to do a heap of research – he’d never worked in a pub before, so taps and kegs were all new to him.

“I did my research online and found out there are basically two solutions for a tap setup:  Cooling the keg itself – having it in a fridge basically and then having a beer cooler that chills the beer while going from keg to tap.”

“I chose the beer cooler, as I knew that I would be able to hide it in my bar. After deciding this, I started to do some research online to see where I could buy a bar.”

Step 3: Finding the bar and the furniture

“The first and big thing you need is the furniture, of course. In my case, it‘s a little bar and shelf combination.

I had this dark wooden bar in my mind that would create the look of an old Victorian Pub. I found mine in a classified ad online.”

Step 4: Setting up the bar

Now the proud owner of a fine-looking bar, Franz went about sourcing everything from gas containers to the cooling system, all of which were bought online.

Here’s a more detailed breakdown of the various bits and bobs that were required:

Step 5: Getting the keg and storing it

“To get the keg, I just went online and searched for Guinness keg suppliers in my area. There are two sizes of Guinness kegs – 30 Liters (52+ pints) and 50 Liters (88+ pints).

You should store the keg in a cool space with no sunlight, ideally under 10 degrees, but storing usually is not needed for the home as you just order the keg and immediately tap it after letting it sit for a day to calm it down after transport.”

Step 6: Kitting out the bar

“For the decorations, I got some online, but also picked some up at flee markets and at auctions. I spend a lot of time on eBay, donedeal, adverts.ie etc. looking for vintage Guinness stuff and pub memorabilia.

Be careful though, you can get addicted! Haha… I have loads of stuff that I‘m not even using because there‘s not enough room in my little corner bar.

The big thing for the decorations for me was my Guinness light up pub sign, that‘s hanging above the bar.”

How much it cost to set up 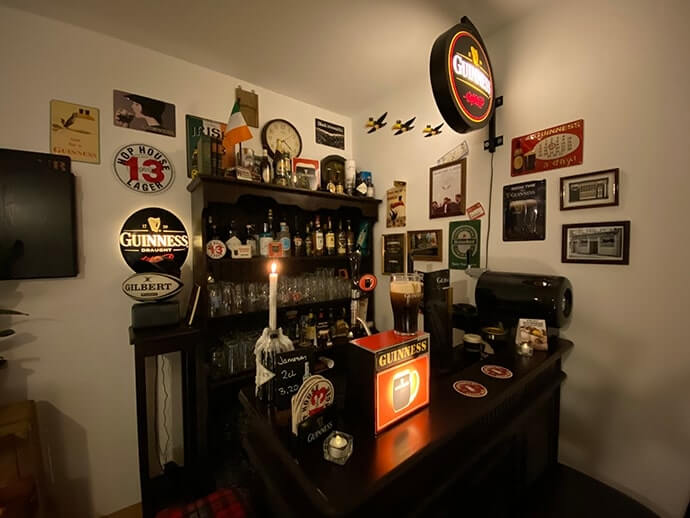 So, Franz’s home pub wasn’t cheap to set up and kit out. In total, it cost around €1,500 for all the different gear needed. Here’s a full breakdown.

Wait… what about the old school red counter mount? 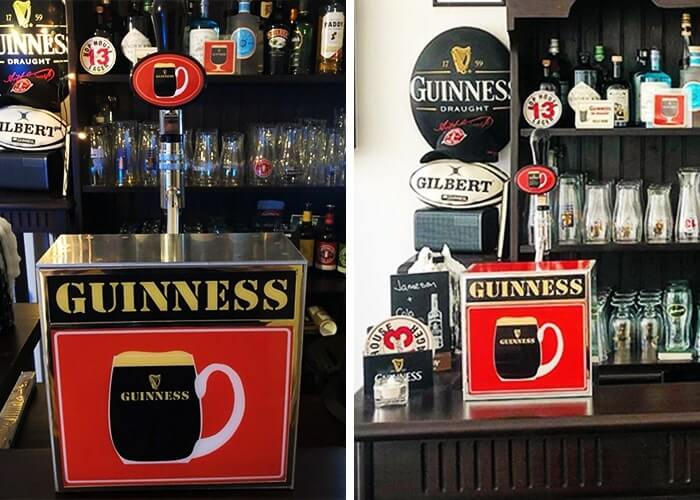 “So the thing with the Guinness taps/counter mounts is that they‘re the property of Guinness/Diageo and they used to provide them free to pubs.

Apparently, they even take them back if for some reason the pub closes down or if it gets changed to a newer version, like recently to the harp style ones.

So, there’s no shop you can just go and buy them. And it‘s kind of rare that they even get offered online like eBay etc.

My first one was the black and gold tower one, I found that one on eBay. However, I really liked the vintage looking red box one that many of my favourite pubs had.

These were originally from the 70s but they were relaunched as a light-up, more modern version about 7-8 years ago. I spent a year looking for one with no luck.”

“So, as I realized it‘s almost impossible to get one, I thought maybe I could build one myself.

I looked at every picture I could find, looked at them in person, took some pictures and got some measurements from pubs that have them.

I started sketching the first blueprints, got myself a Guinness tap with a swan neck online that would fit and a fitting drip tray. I then recreated the graphics for the front and had the sticker printed.

When I had worked out a detailed blueprint for the box and drip tray structure, I asked a friend who workes with metal if he could help me build it – thankfully he said yes.

We built it at his workshop where we were able to use all the machines we needed for punching, bending and drilling the metal.

Without that, it wouldn‘t have been possible. One thing I had to get done externally was the black coating – it‘s anodised in black.”

I’ve seen your pints… they look the business. What’s the secret behind the perfect pour? 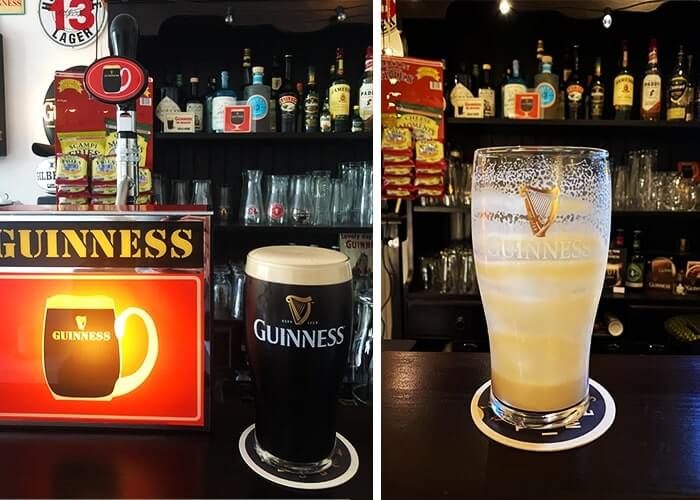 “So the first thing is that the keg must be as fresh as it can be, nowhere near the Best Before Date!

The lines must be clean and as short as possible! The dirtier and longer the lines, the higher the chance the stout picks up any “Off flavours“ you don‘t want!

Gas pressure has to be right (between 30 and 40psi – it depends on the line length, the height of the tap compared to the keg and the temperature the keg is at while pouring).”

“And then, very important, the glass must be “beer clean”. You can‘t wash your glasses with your usual oil-based dishwashing soap.

Also, you should never get your pint glasses in contact with milk, or greasy food, so don‘t put it in the dishwasher with your coffee cups and food plates.

All that creates a film on the inside of the glass that destroys the head of your pint, creates ugly bubbles on the inside and keeps you from having a beautifully laced empty glass.

I recommend cleaning your glasses with hot water only and by hand.  A perfect pint has a temperature of 5-7 degrees Celsius with a head of 12-18mm in size that creates a dome just above the brim.

Pouring it at a 45-degree angle and in two parts (second part pushing the tap handle away from you) helps you achieve just that!”

While we have you – where’s your favourite spot for a pint? 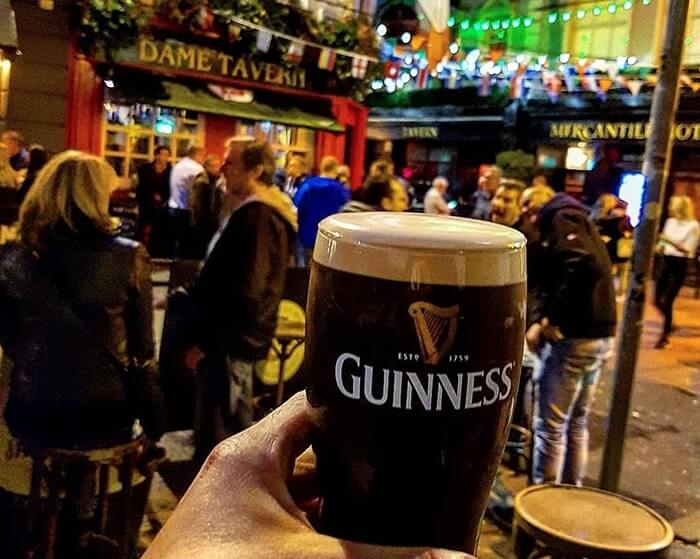 “My favourite Pubs for pints of Guinness are John Kavanagh‘s “The Gravediggers”, John Kehoe‘s, The Palace Bar, The Long Hall and two other hidden gems: The Old Royal Oak and Hartigan’s!”

Find more pubs that pour a mighty pint in our guide to finding the best Guinness in Dublin. Make sure to follow Franz on @allthingsguinness to see more!

Would you please let us know who your keg's supplier is? and maybe leave us with his contact details please!

Great article, answered alot of my questions. Just wondering, Is there a formula for this?

"Gas pressure has to be right (between 30 and 40psi – it depends on the line length, the height of the tap compared to the keg and the temperature the keg is at while pouring)."

Great article thanks has my mind made up?