If I were you, I’d read any guide to the best Guinness in Dublin with a good dose of scepticism. Even this one…

Personally, I think it’s very difficult to crown one pub as the ‘GOAT’, for a couple of reasons. The 1st is that taste is subjective – what I think is class you might think is just alright.

The 2nd is your experience when you visit. I can’t count the amount of times I’ve been told a pub does the best Guinness in Dublin, only to have a bog-standard pint served to me on the day. So, beware!

In the guide below, you’ll find where I think does the best pint of Guinness in Dublin, based on recent visits in 2022. There’s also a second section on pubs in Dublin known to serve up a fine drop.

Where I think does the best Guinness in Dublin 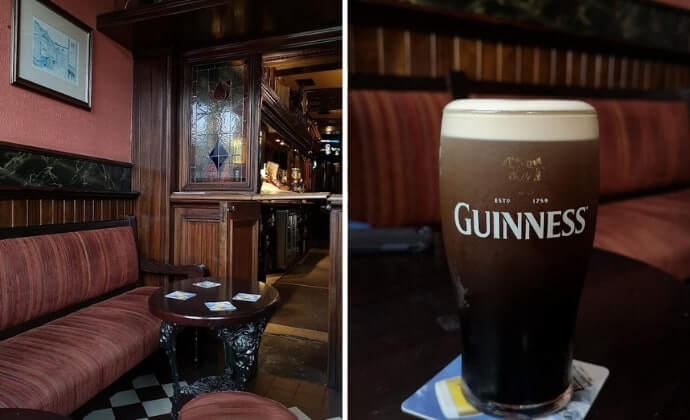 The first section of the guide contains a handful of places that I think does the best pint of Guinness in Dublin. These are pubs I’ve been to several times, and would return to in a heartbeat.

For some, like Gaffneys, I’ve been to many times while others, like Bowes, I’ve only been to once or twice. Dive on in.

No surprise with the top spot. John Kavanagh’s (aka ‘The Gravediggers’) in Glasnevin is widely regarded as doing the best Guinness in Dublin, and I agree.

However, what gives this place its ‘X-Factor’ isn’t just the Guinness – this is a gorgeous, old-world pub that’ll make you feel like you’ve stepped back in time.

The service is exceptional and, as there’s no music or TV, it’s the perfect place to kick back with a pint and have a yap with friends. Creamy, smooth and, most importantly, consistent, ‘The Gravediggers’ really is mighty. 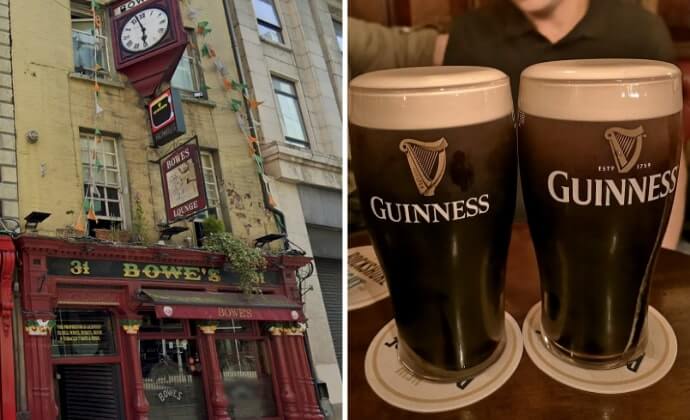 I’ve tried to carve out an afternoon to visit Bowes on countless occasions, but it wasn’t until a chilly Saturday in late October that I finally managed a visit.

Bowes, which has been licenced since 1880, is one of those Dublin pubs you’ll wish was your local. It’s small, but my God does it pack a punch.

The interior has a cosy, homely feel to it and there’s a lovely snug right inside the door. On the day we visited the Guinness was outstanding – thick heads, zero bitterness and too easy to drink if anything.

Related read: Check out our guide to the finest rooftop bars in Dublin (from swanky restaurants to quirky cocktail bars in Dublin) 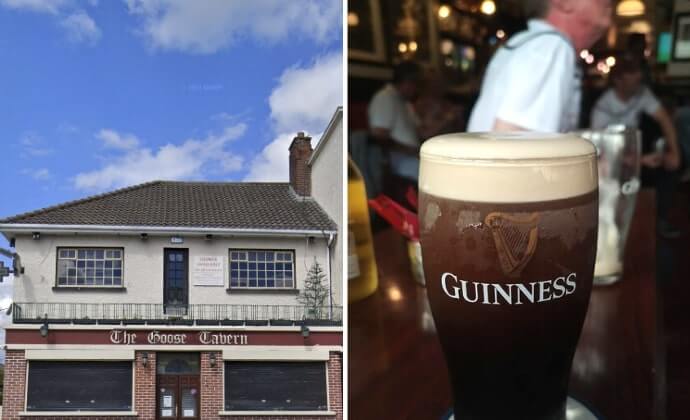 The Goose Tavern in Drumcondra/Whitehall is a bit off-the-beaten-path for many, but this place pours, in my opinion, some of the best Guinness in Dublin.

When you walk through its doors, you’ll find a smallish section on the left, with a bit of seating, and a big seating area in to the right.

The Goose is a traditional pub, with old furnishings, random bits and bobs dotted on its walls and plenty of comfy corners to kick-back in solo or with a group.

Although the glass in the photo above looks a bit dirty, the pint inside was absolute perfection. As was the 2nd, 3rd, 4th, 5th…

I popped Gaffney’s in a guide to the best Guinness in Dublin that we published a few years back, and got a load of criticism for it, mainly from those that only visit on match days.

If you can, visit here any time other than when Croke Park is in full swing, and you’re in for a treat. You’ll find Gaffney’s in Fairview, just outside of the city centre.

I’ve been here a heap of times over the years, and the pint is always mighty. The seats just in on your left are handy if you’re visiting with 4 to 6 friends in tow. 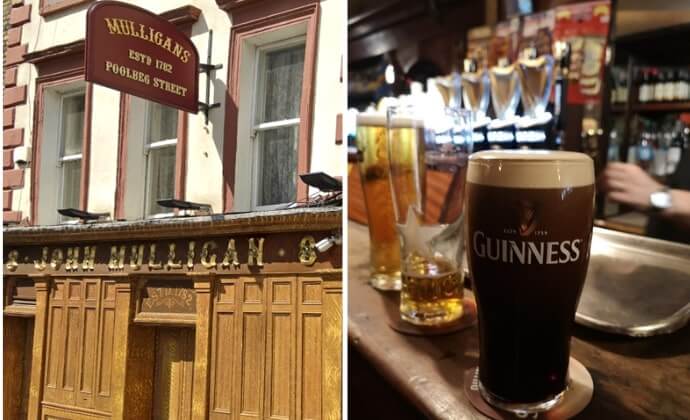 Mulligan’s on Poolbeg Street is one of the most famous pubs in Dublin. Known for its colourful history that spans over 200 years, it began its life as an unlicensed drinking venue until it began serving up pints legally in 1782.

Since then, it’s become known for the quality of its Guinness. Now, the first time I visited Mulligan’s I had a very bog-standard pint (and brutal service).

It wasn’t until a return visit a year or so later that I was able to experience the magic of this place. If you can, nab the little seat just to the right of the second bar and perch yourself for the night.

The best pint of Guinness in Dublin (according to the masses) 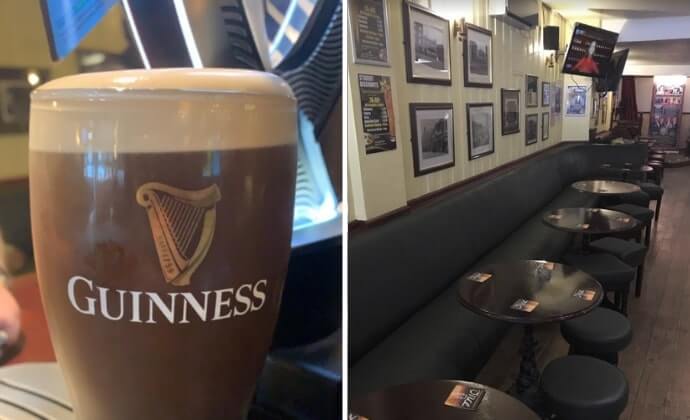 Photos via Tom Kennedy’s on FB

Over the years, I’ve built up a list in my head of places that are widely reputed to do some of the best Guinness in Dublin.

These are pubs that I haven’t managed to get to yet but, according to the rave reviews online, do a serious pint. 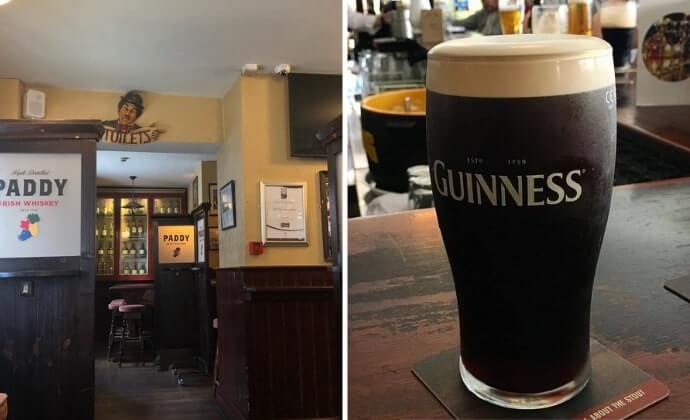 Photos via Walsh’s on FB

Aside from ‘The Gravediggers’, I tend to receive recommendations for Walsh’s of Stoneybatter more than any other Dublin pub.

And, going off the pint on the right above, it’s not hard to see why! Inside Walsh’s you’ll find old-school wooden floors and gorgeous, dark-panneled wooden surfaces.

If you rock up here on a winters evening, try and nab the snug (you’d be doing well!) or the seats near the fire. If this really is some of the best Guinness in Dublin, you’ll be tucked away here for the night. 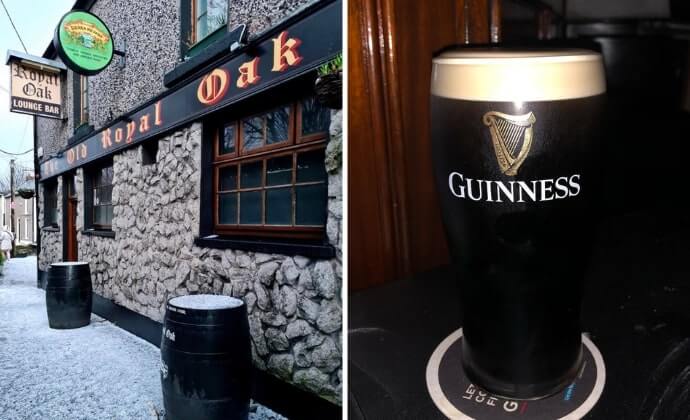 Photos via The Old Royal Oak on FB

Next up is a bit of a hidden gem a stone’s throw from Kilmainham Gaol – The Old Royal Oak. They say a picture is worth a thousand words and the photo above is testament to that.

The Old Royal Oak is a no-nonsense pub, and I mean that in the best possible sense. It’s nearly 180 years old and inside you’ll find a fairly bare decor with plenty of finely polished wood veneer.

The Oak is also home to a small, intimate snug that, from what I’ve heard, can be reserved ahead of time. And the Guinness. Well, the reviews and photos speak for themselves!

Related read: Check out our guide to 24 of the best pubs in Dublin (traditional and historic pubs perfect for a weekend pint) 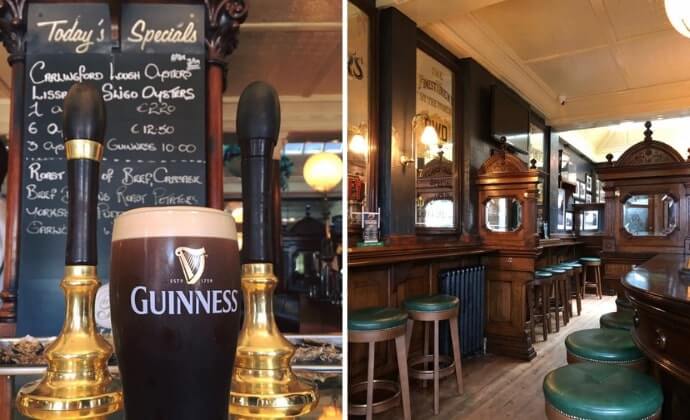 Photo via Ryan’s of Parkgate Street on FB

I know a lot of people out there that say the best Guinness in Dublin can be had in Ryan’s of Parkgate St. (you’ll get some of the best steak in Dublin here, too!).

You’ll find Ryan’s a stone’s throw from the front gate of the Phoenix Park. Renowned far and wide for the quality of its Guinness, its traditional interior and it’s top-notch food, this is a pub that’s worth travelling to.

Keep an eye out for the gas lamps, some of the finest traditional snugs in Dublin and the other ornate features when you visit.

Photos via Tom Kennedy’s on FB

Kennedy’s is another public house widely considered to do the best pint of Guinness in Dublin and, if the photo above is anything to go by, I can see why.

I’d say my eyes have flicked up to the photo on the left above 20 times since typing this sentence… You’ll find Tom Kennedy’s on Thomas St in The Liberties, not far from Vicar Street.

Going off the many reviews online, this is a traditional pub where you can expect a warm welcome, a friendly atmosphere and a tasty beef and Guinness stew.

Related read: Check out our guide to 10 of the best pubs in Dublin with live music (trad pubs running lively sessions) 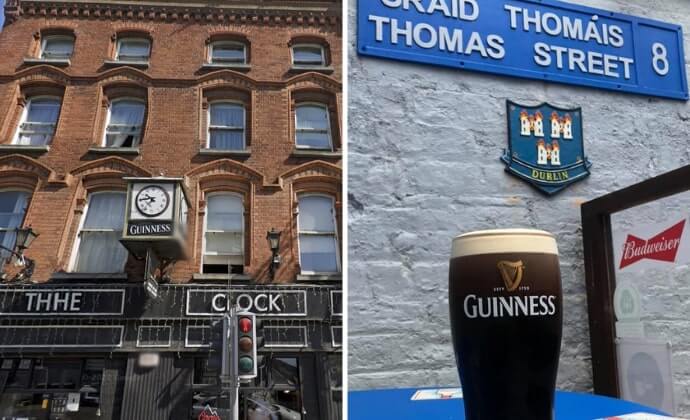 Photo left: Google Maps. Right: Via The Clock on FB

The Clock on Thomas Street (not far from Kennedy’s) is another one that knocks out a memorable pint, by all accounts.

As has been the case with many pubs in this guide, The Clock is a no-fuss Dublin pub that has a proper ‘local’ feel to it with plenty of seating to be had (try and nab the ones by the window).

It’s also linked to the Irish rebellion of 1803 – it’s said that the pub was a regular meeting spot for the United Irish men when planning the rebellion. 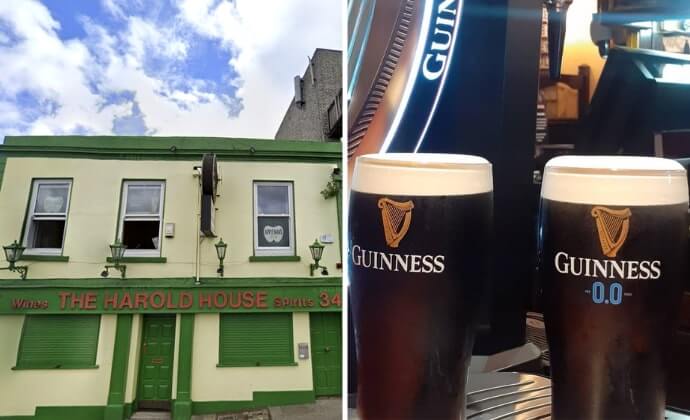 You’ll find the Harold House on Upper Clanbrassil Street in Portobello and it’s not hard to miss, with its bright, yellow and green exterior.

However, many in search of the best pint of Guinness in Dublin tend to overlook it. With that being said, the Harold House has been recommended to me a clatter of times before.

The interior of the Harold House feels more like a sitting room than a pub, with thick red carpets and cosy seating (there’s stools at the bar and couches lining the walls).

Although I’ve heard great things about the Guinness here, it’s said that the real magic from the Harold House is the Beamish. 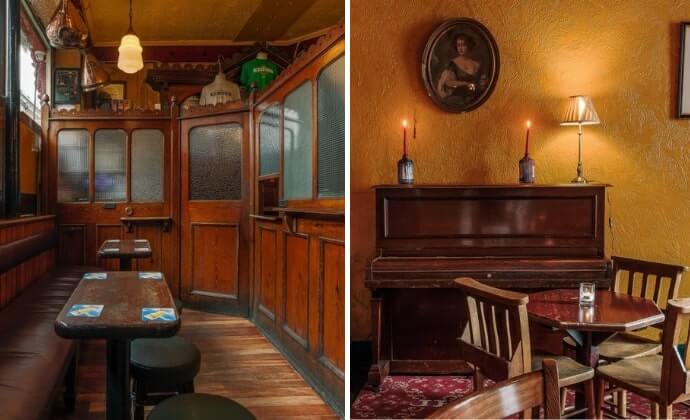 Kehoe’s is one of the great Dublin pubs and it’s one of several spots on our historic Dublin pubs crawl (alongside Neary’s, The Palace, McDaid’s and more).

First licensed in 1803, it stands as a Victorian shrine, its interior decked out as it was after its 19th-century renovation.

Now, while it’s widely agreed that Kehoe’s pours one of the best pints of Guinness in Dublin, I personally find that the pints downstairs are far tastier than the ones upstairs. But that could just be me!

Related read: Check out our guide to 7 of the oldest pubs in Dublin (from ancient taverns to supposedly haunted public houses) 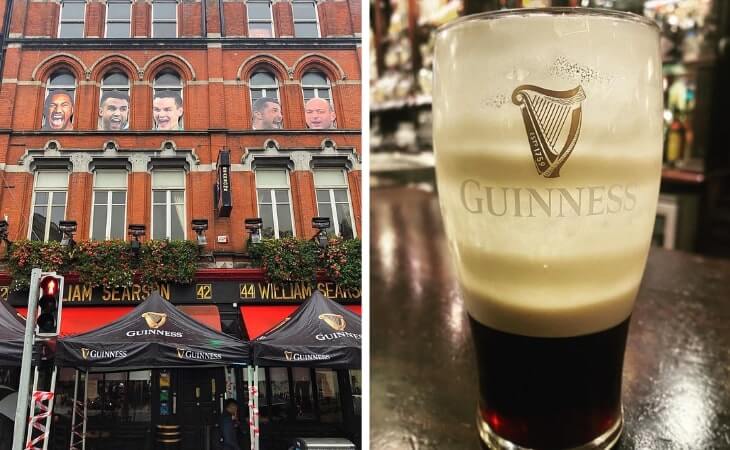 If you read our guide to the best snugs in Dublin, you’ll have come across Searson’s of Baggot Street before. This pub is home to a mighty snug where you can kick back and enjoy a fine pint.

Searson’s was frequented by the late Patrick Kavanagh during the 1940s and 50s (he actually mentions Searson’s in a poem titled ‘The Bank Holiday’).

The Guinness in Searson’s is top-notch. Dodge it if you can on Fridays, as it’s wedged with an after work crowd.

The best pints in Dublin City: Where have we missed?

I’ve no doubt that we’ve unintentionally left out some great Dublin pubs that pour a fine drop in the guide above.

FAQs about the best Guinness Dublin has to offer

We’ve had a lot of questions over the years asking about everything from ‘Where does the cheapest Guinness in Dublin?” to “Which is the best in the city centre?’.

Where does the best Guinness in Dublin?

In my opinion, John Kavanagh’s, Bowes, The Goose Tavern, Gaffney & Son and Mulligans do pints that’ll have you coming back time and time again.

Where does the best pint of Guinness in Dublin?

It’s widely accepted that the best pint of Guinness in Dublin can be found in Glasnevin, in the Gravediggers Pub (John Kavanagh’s).

Finally someone acknowledges Gaffneys. So many overrated pints in 'famous' Dublin pint spots, slung out by barmen who don't care. Gaffneys is the best pint I've had in Dub over the years.