The Celtic Triskelion (AKA the Triskele or the Celtic Spiral) is a very ancient symbol.

And, in fact, it isn’t actually one of the Celtic symbols as it can be traced in Ireland to around 2,500 years before the Celts arrive in Ireland.

In the guide below, you’ll find its history, different designs along with the most accurate Triskelion meanings.

Some quick need-to-knows about the Triskelion symbol 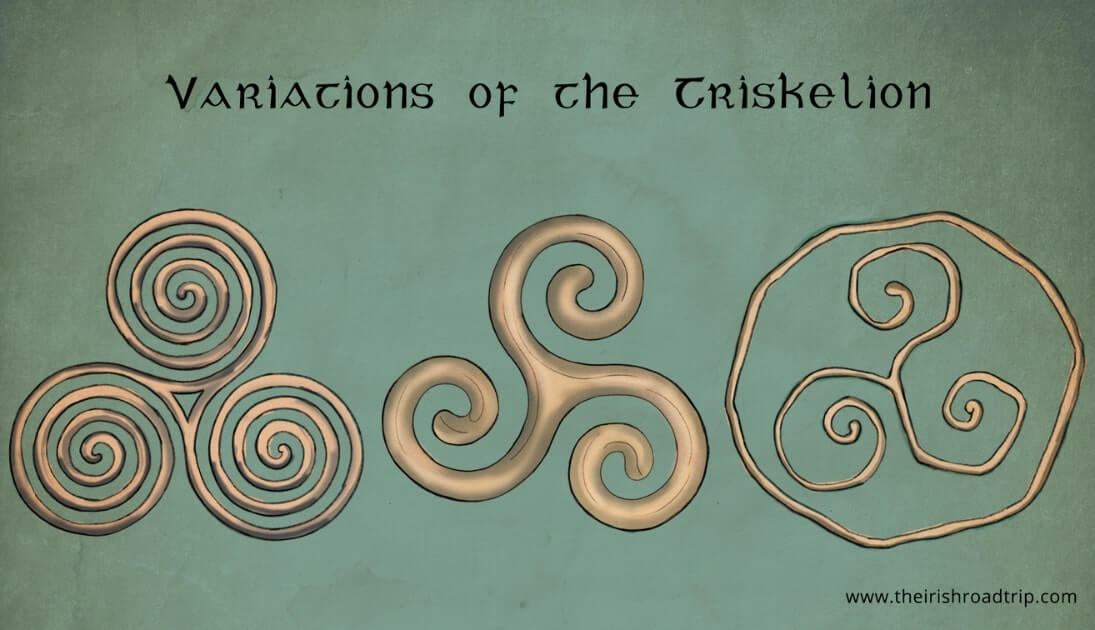 Before you scroll down to read about the various Triskelion meanings, take 20 seconds to read the points below as they’ll get you up-to-speed quickly:

1. It predates the Celts

We can say with confidence that the Triskele symbol wasn’t invented by the Celts. We know this as the symbol was found on the Newgrange tomb in Meath. This tomb predates the arrival of the Celts in Ireland by over 2,500 years.

So, although the Celts didn’t invent the Triskele symbol, they used it extensively in their carvings, artwork and in some metalwork. It’s likely that they adopted the Triskelion symbol as it has three distinct sections (Celts believed that everything of importance came in threes).

3. A variety of meanings

The Triskelion meaning receives a lot of debate online. Some say that it symbolises strength and progress and the ability to move forward (see why below) while others say it represents the physical realm, the spirit world and the celestial world of the sun, moon, stars and planets.

4. One of the world’s oldest symbols

The Triskelion symbol is old – very old. It’s believed that the Celtic Triskele is around since the Neolithic times, which is roughly 3,200 years BC! It’s for this reason that the Triskelion meaning is so heavily debated.

A brief history of the ancient Celtic Spiral 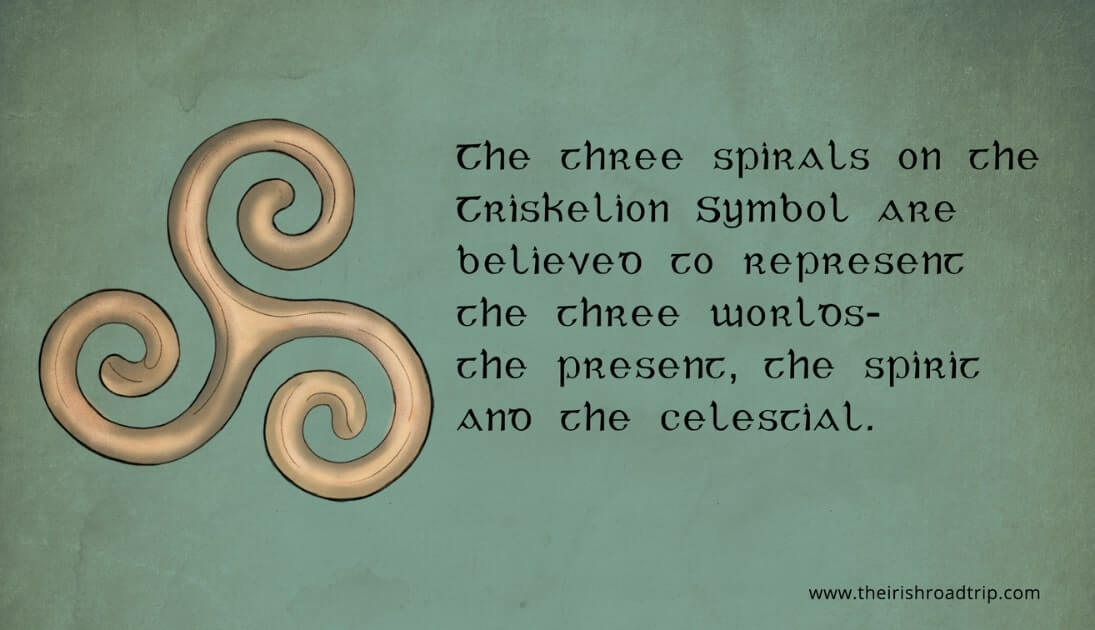 As mentioned above, although it’s often referred to as the ‘Celtic Spiral’, the Triskelion symbol pre-dates the arrival of the Celts in Ireland by thousands of years.

Although its true origin is known, the Triskele can be traced back to different periods of time.

The Triple Spiral popped up in many cultures across the globe between the Neolithic to Bronze Age. One of the earliest occurrences took place between 4400–3600 BC on the island of Malta.

It was also found carved into the tomb of Newgrange in Ireland, which was constructed around 3200 BC. Interestingly, it was also found on Greek ships from the Mycenaean phase of the Bronze Age.

The chances are you may have see the ‘Triskeles proper’, which is the symbol you see above, but with three legs instead of the spirals. This was found in Greek pottery, shields and coins as far back at the 6th century.

In Syracuse in Sicily, the Triskelion symbol was used as far back as 700 BC. It was used by rulers of the city (possibly due to the island of Sicily having three headlands).

The Triple Spiral made many appearances across Europe over the years. One of the more notable examples is in a carving in a settlement in the northwestern regions of the Iberian Peninsula.

There’s also evidence of the symbol in Gothic architecture which was popular during the 12th to 16th century. 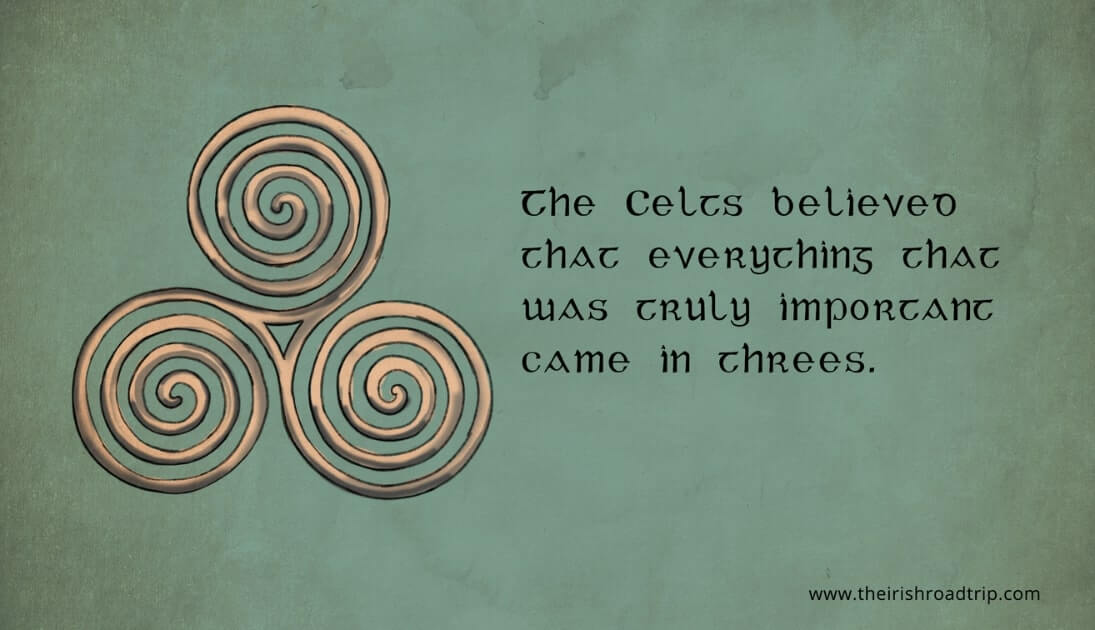 As is the case with many Celtic Knots and symbols, the Triskele meaning varies greatly, depending on what you ready and who you speak to.

Records from back when these symbols were used are light to say the least, so interpretation plays a big part in deciphering the Celtic Triskele symbol meaning.

If you read our guide to Celtic symbols and their meanings, you’ll know the Celts believed that everything that was truly important came in threes.

As you can see in the photo above, this Celtic spiral symbol has three clockwise spirals, each of which connects from a central hub. It’s for this reason that many believe this is the Celtic symbol for family.

Another possible Triskele meaning is that the three spirals represent the three worlds:

The flowing knot design represents the Celt’s all-important number three along with endless lines with no visible point of start or finish.

Some believe the Celtic Triskelion meaning revolves around strength and progress and the ability to move forward and overcome extreme adversity (represented by the appearance of movement in the symbol).

FAQs about the Celtic Triskele

We’ve had a lot of questions over the years asking about everything from ‘What is the Celtic Spiral meaning?’ to ‘What design is good for a tattoo?’.

What does Triskele symbolize?

The Triskele, which is one of the oldest symbols, is believed to symbolise everything from family and the three worlds (present, spirit and celestial) to strength and proggress.

What is the meaning of the Triskele?

The meaning of this symbol, as mentioned above, is open to interpretation. For some, it means strength and family unity. For others, it represents the different worlds.

Thanks for the information! I got a bit confused about how to determine whether a Triskelion is clockwise or counterclockwise though. Do you start from the centre of a spiral and follow it to the central hub of the Triskelion, or the other way round? (I tried to find that out on other websites as well, but found both ways.) Thanks. :)

Thanks for the info!