A visit to Kilmainham Gaol (Jail) is arguably one of the best things to do in Dublin.

Built back in 1796 and initially known as the ‘new gaol’ in order to differentiate it from the dungeon it was replacing, the Kilmainham Gaol museum is a fascinating place to explore.

Over the course of its life as a working prison, it housed many a notable name while also playing witness to the executions of several leaders of the 1916 Rising.

Below, you’ll get the lowdown on the Kilmainham Gaol tour, where to grab parking, how to get there via public transport and more handy info.

Some quick need-to-knows about Kilmainham Gaol

Although a visit to the Kilmainham Gaol museum is fairly straightforward, there are a few need-to-knows that’ll make your visit that bit more enjoyable.

The Kilmainham Gaol opening hours differ slightly, depending on what time of year you visit (though the time differences are so small that they shouldn’t affect your itinerary too much).

Though there are no car parking facilities at Kilmainham Gaol, parking is available at the nearby Irish Museum of Modern Art/Royal Hospital Kilmainham. Access is via East Gate on Military Road. The car park is just a 5-minute walk to the Gaol.

5. Getting there by public transport

There are four Dublin buses that drop you close to the Kilmainham Gaol museum so consider jumping on any of these: 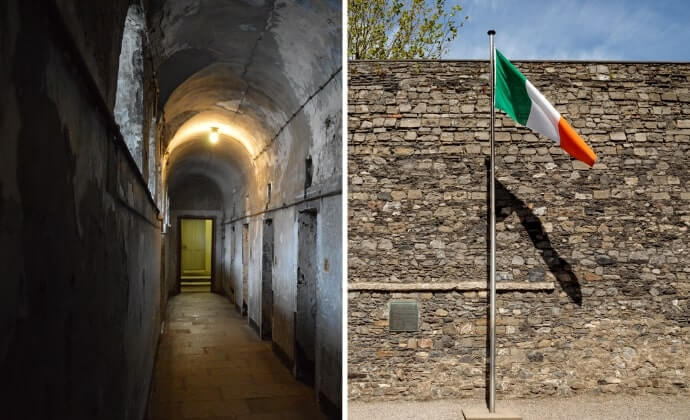 Dublin’s infamous prison was built back in 1796 and was initially known as the ‘new gaol’ in order to differentiate it from the dungeon it was replacing.

Despite the new premises, conditions inside Kilmainham weren’t a whole lot better. With no segregation of prisoners, men, women and children were incarcerated together, with up to 5 in each cell and only a single candle for light and heat.

The poor conditions meant that most of the prisoners’ time was spent in the cold and dark, while each candle had to last for up to two weeks.

Things would eventually get a little warmer for certain adult prisoners who would be transported to Australia as convicts.

From the beginning, the prison had powerful ties to Irish Nationalism and actually housed its first political prisoner in the same year that it opened!

Seven years later, the leader of the 1803 Irish rebellion, Robert Emmet, was incarcerated at Kilmainham before being hanged for high treason.

But Kilmainham is probably most famous for its role in the imprisonment and executions of the leaders of the 1916 Easter Rising. Of the 90 people sentenced to death, fifteen were executed at Kilmainham including Proclamation of the Republic signatories Patrick Pearse, Thomas Clarke and James Connolly.

Restoration and life as a museum

Following the end of the Irish Civil War, the prison closed due to it being seen as the symbol of oppression and difficult past.

While interest in re-opening the prison as a museum to Irish Nationalism was strong, over 40 years passed before Kilmainham was able to be restored and it finally opened to the public in April 1966.

These days, Kilmainham Gaol is one of the biggest unoccupied prisons in Europe and it’s one of the most evocative symbols of Dublin and Ireland’s turbulent history.

One of the reasons the Kilmainham Gaol tour is one of the most popular places to visit in Dublin is due to the sheer number of things there is to see and do.

Below, you’ll find info on the various corners of the building you’ll explore and the stories you’ll hear on the Kilmainham Gaol tour. 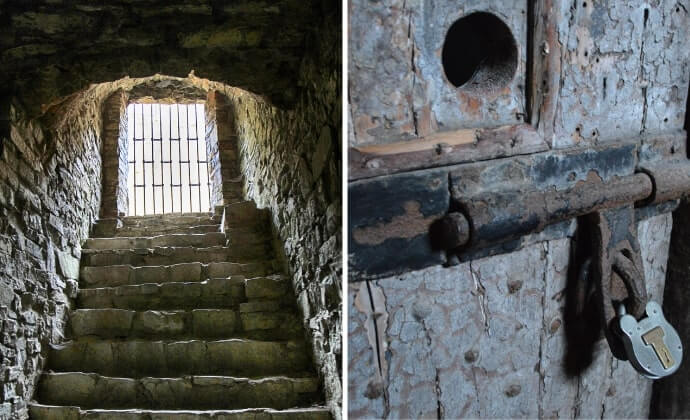 Taking 10 years to build, construction began on the new gaol in 1786 and would cost the Grand Jury of the County of Dublin £22,000 by the time it was finished (a hefty sum of money in those days!).

The gaolers lived in the central front block, while the two wings contained cells for the prisoners. The interior buildings and yards are surrounded by a thick wall which measures between 30′ and 50′ depending on its location, while the main entrance was the formidable doorway (with the five snakes above it).

Just outside this entrance was where public hangings took place until the late nineteenth century, and remains of the fixtures for the gallows can still be seen. 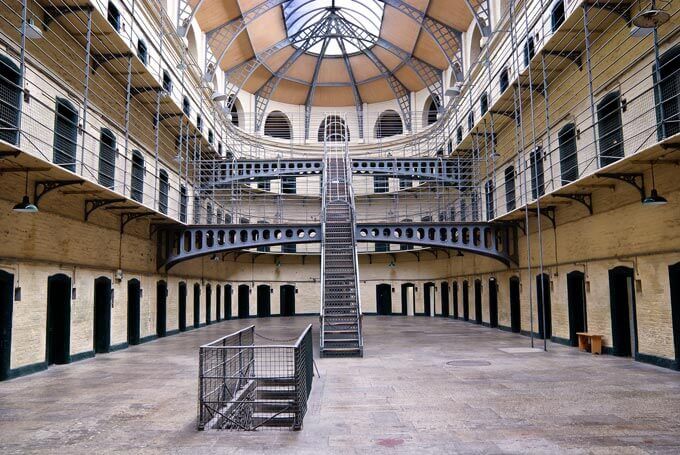 As we touched on earlier, conditions at the prison were pretty squalid despite being billed as a higher quality replacement for the old gaol (not to mention the cost!).

The same problems that dogged the old gaol raised their ugly head again at Kilmainham, mainly thanks to the overcrowding which led to disease and poor hygiene.

The famine years were particularly bad and food rations during this period were particularly low. Yet amazingly, people were committing crimes to be allowed entry into the prison due to the small amount of regular food available.

Prisoners also worked within the Gaol. A sentence of hard labour for a man consisted of manually breaking stones in the Stonebreakers’ Yard, and for women meant working in the laundry.

3. The transportation of convicts 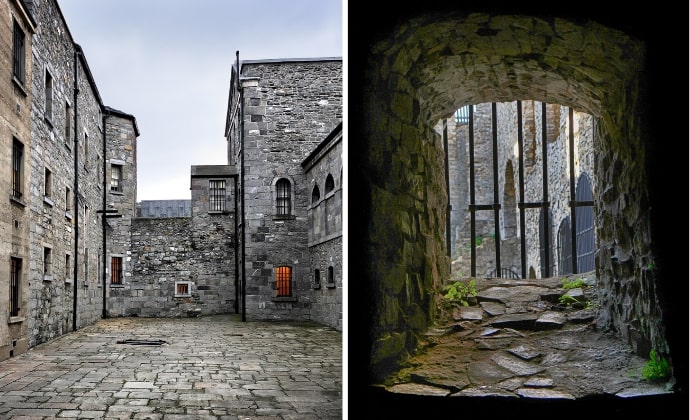 Ironically, the main reason the gaol suffered from overcrowding was due to people waiting to leave. From the time it opened until the early 1850s, Kilmainham Gaol was used as a depot for convicts from the north-east of Ireland, who had been sentenced to transportation to Australia.

Here they would wait before being transferred to a port in either Dublin or Cork, where they would board great convict ships bound for Australian penal colonies.

Over 4,000 prisoners were processed through Kilmainham during this period, and most of them were either petty criminals or political prisoners. 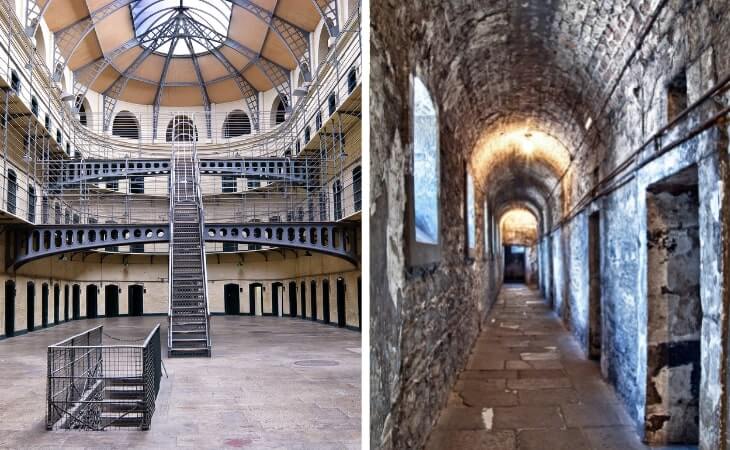 The 14 years between 1910 and 1924 represented what Kilmainham would eventually become most famous for. From the height of overcrowding in the mid 19th century, the last two decades of the century actually saw a decline in the prison population and Kilmainham was closed as a money saving exercise by the government.

In 1910, those in Kilmainham were transferred to Mountjoy Prison, and a year later Kilmainham Gaol was handed over to the military (the British Army) for their use from then on.

From the outbreak of World War I in 1914, they used it as living quarters for new recruits, and as a military detention centre for soldiers. 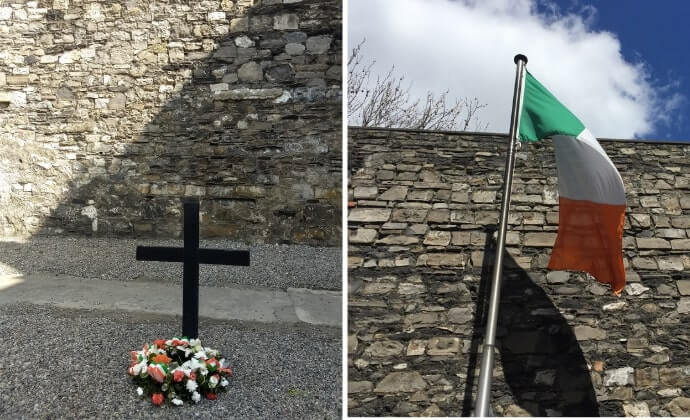 Taking advantage Great Britain’s resources being ploughed into the war, the Easter Rising of 1916 took place when the enemy was at its most distracted.

After six days of fighting, the Irish revels eventually surrendered and many were incarcerated in Kilmainham.

Between the 3rd and 12th of May 1916, fourteen men were executed by firing squad in the Stonebreakers’ Yard of Kilmainham Gaol.

Seven of them had been the signatories of the Proclamation and their names are all still significant today. They were Thomas Clarke, Seán Mac Diarmada, Thomas MacDonagh, Patrick Pearse, Éamonn Ceannt, James Connolly, and Joseph Plunkett.

Things to do near the Kilmainham Gaol museum

One of the beauties of the Kilmainham Gaol tour is that, when you finish up, you’re a short walk from some of the best places to visit in Dublin.

Below, you’ll find a handful of things to see and do a stone’s throw from the Kilmainham Gaol museum (plus places to eat and where to grab a post-adventure pint!). 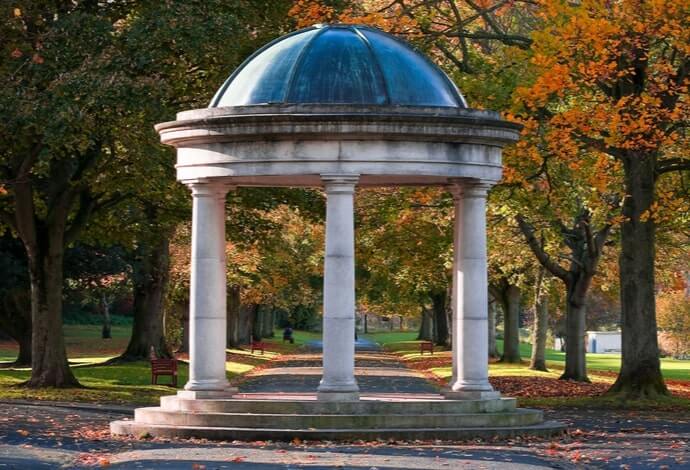 To learn about some more people (many more, in fact) who gave up their lives in the name of freedom and their country, make the short 12-minute walk over to the Irish National War Memorial Gardens. Designed by Sir Edwin Luytens, it’s a peaceful handsome spot featuring a domed temple and sunken gardens. 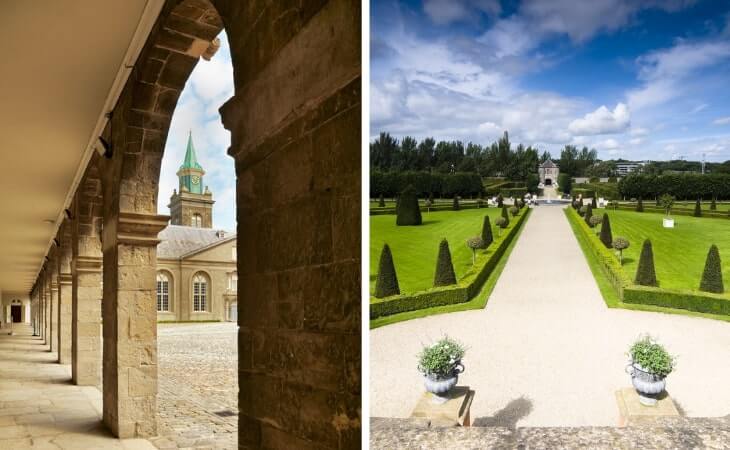 Located in a renovated 17th-century hospital just 15 minutes from the Kilmainham Gaol tour, the Irish Museum of Modern Art is home to the National Collection of modern and contemporary art, with over 3,500 artworks by Irish and International artists. The mix of vivid modern art within the historic walls of the old hospital is a clash of the senses and makes for a really interesting visit.

If you want some fresh air after the tour or if your head needs a little clearing, there’s no better place to do that than the Phoenix Park. One of the largest city parks in Europe, it’s a pleasant 23-minute walk away just across the Liffey and there are a bunch of interesting sights inside, such as the Wellington Monument and Dublin Zoo. 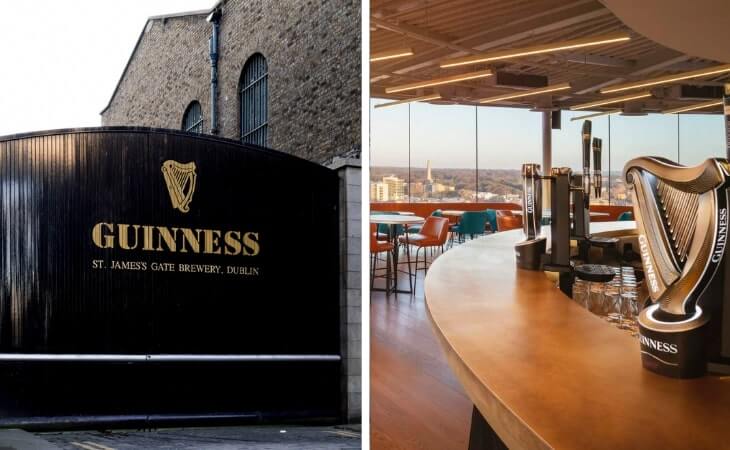 If you’d like to raise a glass to Pearse and Connolly at Ireland’s most iconic brewery, then make the 22-minute walk east over to the Guinness Storehouse. While learning about the history, the brewing process and the legendary adverts is great, it’s the rooftop bar that really makes the Storehouse a cracking visit.

FAQs about Kilmainham Gaol in Dublin

We’ve had a lot of questions over the years asking about everything from ‘Why is Kilmainham Gaol famous?’ (for its historical significance) to ‘Is the Kilmainham Jail tour worth doing?’ (it is!).

How long is the Kilmainham jail tour?

You’ll want to allow around 1.5 hours to get through the entire Kilmainham Gaol museum tour. This includes checking in time.

How much does it cost to visit Kilmainham Gaol?

Is the Kilmainham Gaol museum really worth going to?

OMG YES!! I can't stress enough how absolutely AMAZING this tour was, perhaps even the best of my entire trip which included other wonderful places in Ireland, as well as Scotland and France. It was a sort of last minute decision and I was the only one in my group who knew any of the history surrounding the Kilmanhaim Gaol but every single person in my group LOVED the tour and learned so much from the extremely knowledgeable tour guides. At the end there is a small museum, don't miss the letter from a 17 yr old young man to his mother before he is executed. It haunts me to this day and I have such enormous respect and admiration for every brave soul that fought tirelessly for their beloved free Ireland.

Glad you enjoyed it Karen. It's been a couple of years since I last did it. Thinking about visiting the weekend after next! Great spot!