The Celtic Ailm symbol has strong links to Ogham – the Celtic Tree Alphabet.

A simple cross-like design, the Celtic Ailm is one of several Celtic symbols for strength and endurance.

Below, you’ll discover its origin, its meaning and where the symbol can be seen to this day.

Some quick need-to-knows about the Ailm symbol 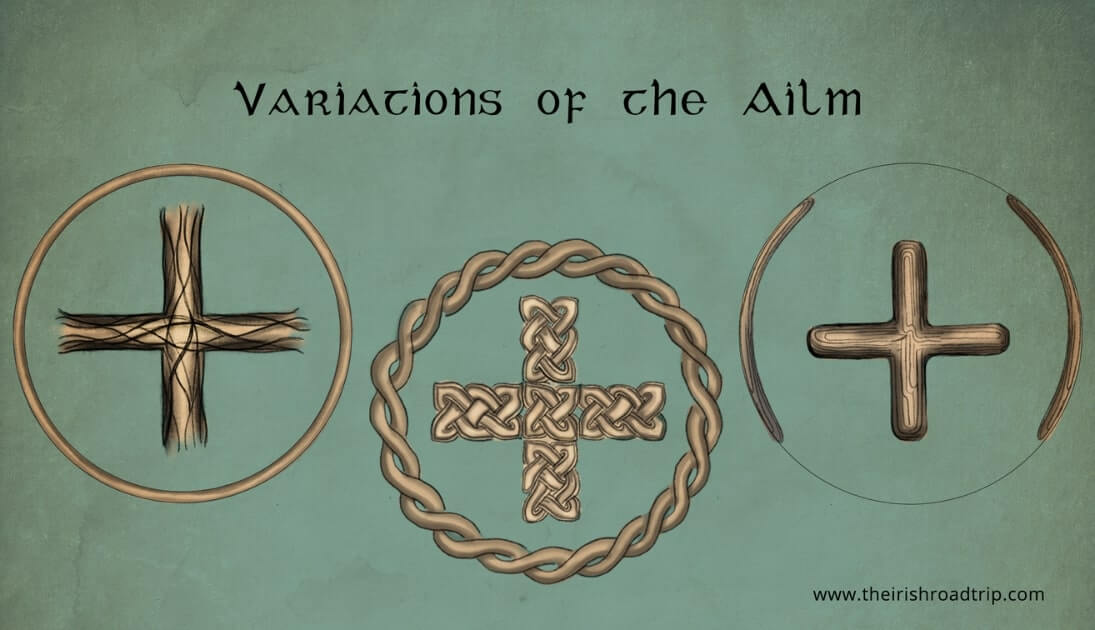 Before we delve into the history and meaning of the Ailm Celtic symbol, let’s get you up-to-speed quickly with the following three points:

The Celtic Ailm symbol as it’s known these days is relatively simple. It typically features an equal-armed, or square cross—pretty much the same as a plus sign—within a circle. The cross doesn’t touch the circle and both elements are independent of one another.

The Ogham alphabet, sometimes known as the Celtic Tree Alphabet, is an Early Mediaeval alphabet that was mostly used to write a primitive form of the Irish language. It dates back to at least the 4th century, with several scholars believing it to go as far back as the 1st century BC.

3. A symbol of strength

Some scholars believe that each letter of the Ogham alphabet was named after a tree. Ailm is most frequently associated with the pine tree, or sometimes the silver fir, though, in all likelihood, it’s most likely to represent Scots Pine.

The Celts had a strong spiritual connection to trees, and pine was most commonly associated with healing, in particular the healing of the soul. Therefore, Ailm has come to be seen as a symbol of inner strength and resilience.

The History of the Celtic Ailm symbol 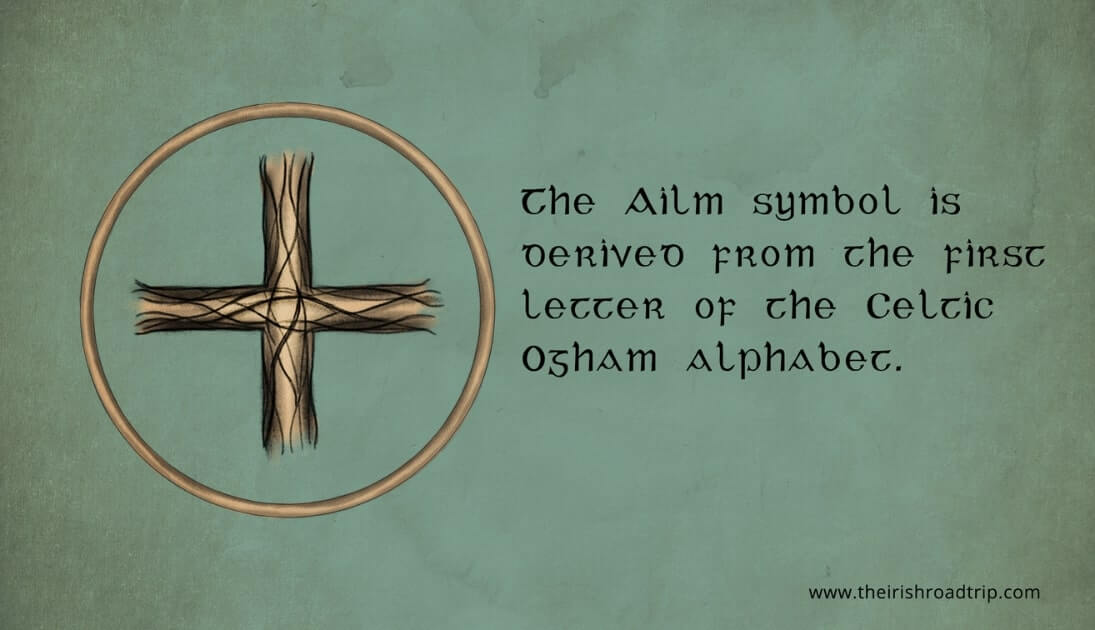 As a letter in the Ogham alphabet, the Ailm Celtic symbol dates back at least as far as the alphabet itself, which according to some could be as long ago as the first century BC.

However, the earliest surviving examples date back to the 4th century BC, carved into stones. It’s almost certain that the alphabet was also used on wood and metal, artefacts that have sadly not survived to this day.

In later centuries, the alphabet was also used in manuscripts.

The Ogham Bríatharogaim are various figures of speech used to describe each letter of the alphabet in place of a single word. Ailm is believed to be associated with three Bríatharogaim;

The Bríatharogaim don’t relate to the letters themselves though. Instead, they’re used to describe the sound, in the case of Ailm, “ah”. It’s interesting that two of these describe beginnings.

When thinking about Ailm as a symbol of inner strength, these beginnings could symbolise the start of a self-healing process, the beginning of understanding, or perhaps a renewed sense of purpose.

Ailm and the Pine Tree

A number of Ogham letters have been confirmed to be linked to trees, such as Duir (D) with oak and Beith (B) with birch. However, not every letter is linked to a tree, as was previously thought.

While it is still known as the Celtic Tree Alphabet, only 8 of the 26 letters have any tenable link to trees. Ailm is one of those, but only because of one single reference to the word, and even that was outside of the Ogham tradition.

The word is seen in a line of the poem, “King Henry and the Hermit”. “Caine ailmi ardom-peitet”. This roughly translates to: “Beautiful are the pines which make music for me”.

As we know, the Celts revered trees and while the pine tree isn’t one of the seven Celtic Sacred Trees, it was still up there as a spiritual symbol.

The Celts associated pine, notably Scots Pine, with healing and cleansing rituals. Pinecones and needles were used to purify and sanctify body, soul, and home.

Branches and cones were also hung over the bed to ward off sickness and were seen to bring strength and vitality. Pine cones were also seen as a symbol of fertility, particularly among men.

Nowadays, the Ailm Celtic symbol is often taken out of context, isolated from the string, or tree trunk, of letters that it originally belonged to.

It is most commonly drawn as a simple square cross, very similar to a plus sign, within a circle. It can be found in earrings, bracelets, necklaces, and other types of jewellery.

Meanwhile, stylized versions incorporate Celtic Knots and interwoven patterns, and have been used in graphic design as well as tattoos.

About the Ailm meaning 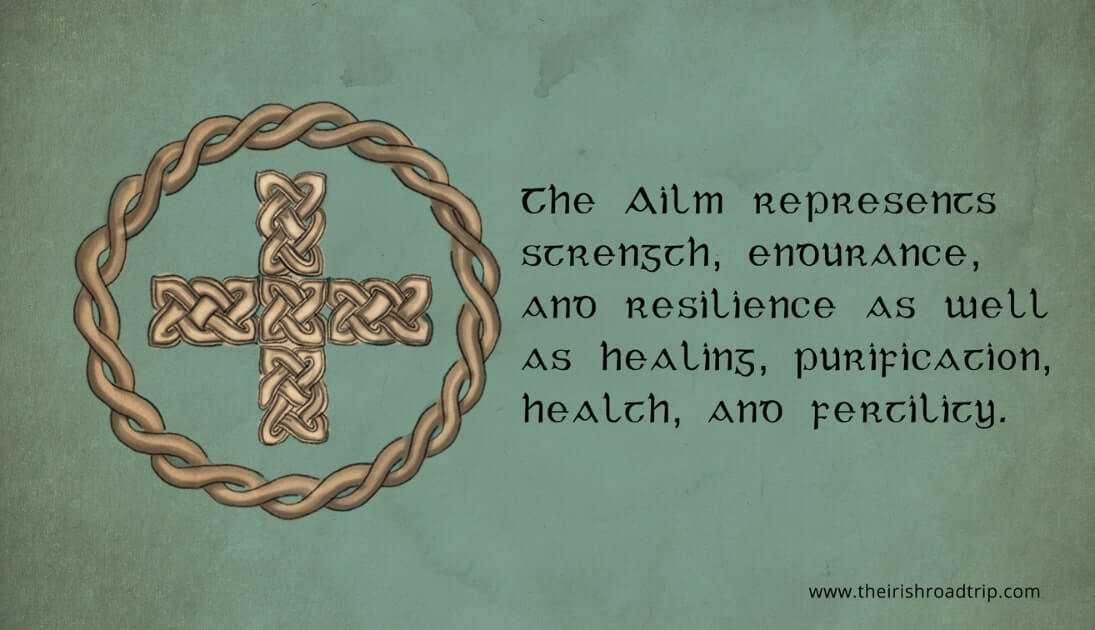 Its association with the pine tree, paired with the Celtic reverence for trees in general, often means the Ailm is seen to represent inner strength.

In Celtic spirituality, pine trees were symbols of resilience, since they were able to withstand tough conditions.

Their ability to regenerate and regrow also indicates rebirth, which links in with the Bríatharogaim associated with Ailm, notably those that discuss beginnings.

The Ailm and the Dara Knot

The Ailm and the Dara Knot are the two Celtic symbols that are most commonly associated with strength. At first glance, they look very different, with the Dara Knot being a fair bit more complex than the Ailm.

But, it’s almost certain that the Ailm predates the Dara Knot by hundreds of years. On closer inspection, particularly in traditional Dara Knot designs, you can see the basic shape of the Ailm shining through, notably an encircled square cross.

Could it be that the Dara Knot was inspired by the Ailm sign? Both symbols are linked with trees, the Dara Knot with oak and the Ailm with pine, and both represent strength, albeit different types of strength.

There’s no scholarly evidence to support this theory, and with no written evidence, it’s impossible to say for certain, but it’s curious to think about. As with almost all Celtic symbols, the meaning of the Ailm is widely open to interpretation.

FAQs about the Celtic Ailm symbol

We’ve had a lot of questions over the years asking about everything from ‘Where did it originate?’ to ‘Where can it still be found?’.

What is the Ailm symbol?

The Ailm Celtic symbol is the 20th letter of the ancient Ogham alphabet which dates back to the 4th century.

What does Ailm mean in Irish?