There are some gorgeous Irish gin brands on the market today.

And, while the various Irish whiskey brands may grab much of the attention, the Irish gin scene is flourishing thanks to the 68 distilleries currently in operation.

Below, you’ll find a mix of the best Irish gin brands, with a mix of pricey, mid-range and budget bottles.

What we think are the best Irish gins 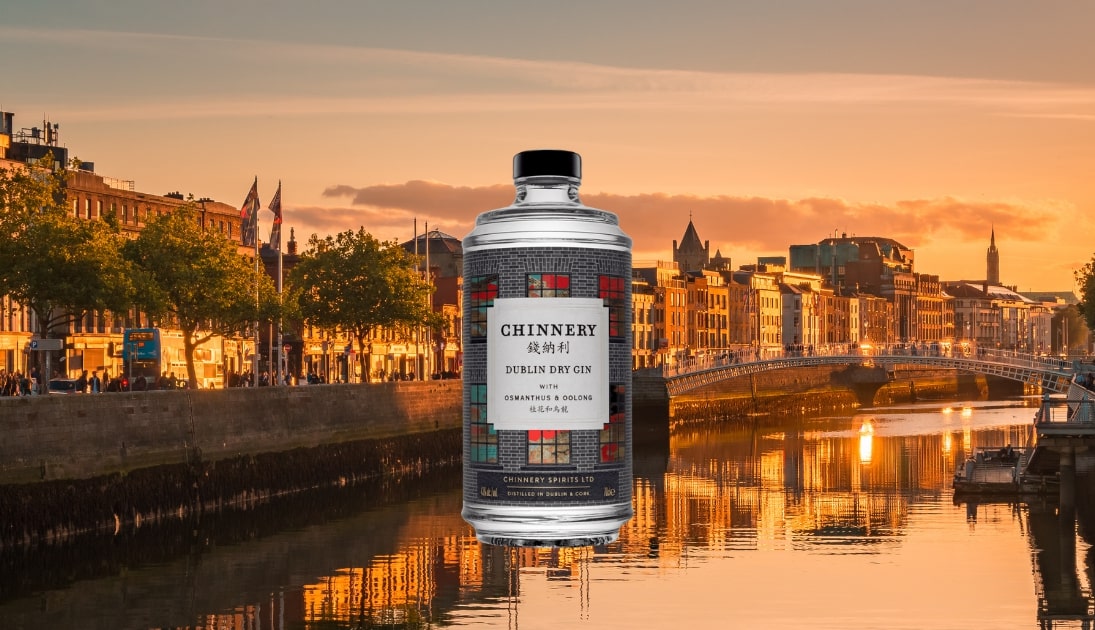 The first section of our guide is packed with our favourites, many of which go great in the various Irish cocktails.

Below, you’ll find everything from Dingle Gin and Drumshanbo to some lesser known Irish gin brands. 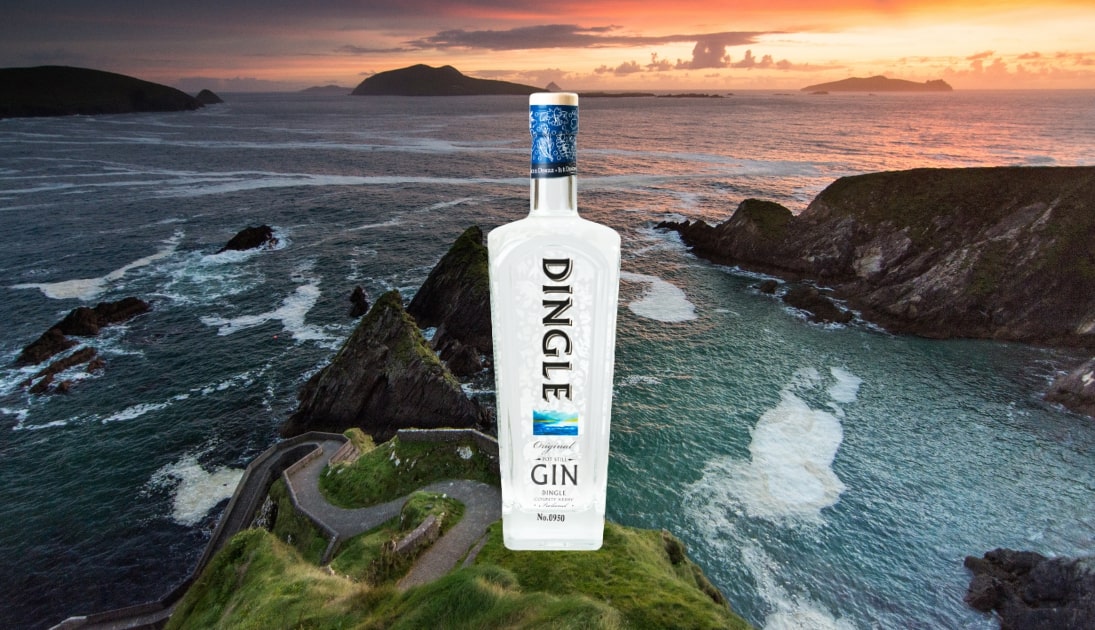 You might recognise our first gin from our Irish drinks guide. Created by the Dingle Distillery, Dingle Gin came away from the World Gin Awards 2019 with the coveted title of “World’s Best Gin 2019”.

The distillery uses an innovative process to create this flavoursome gin by macerating the ingredients in the spirit for 24 hours before distilling it through a flavour basket in the neck of the still.

This distinctive process gives it the term “London gin”. The botanicals used in Dingle Gin include rowan berries, fuchsia, bog myrtle, hawthorn and heather that reflect the natural Kerry landscape.

The resulting 70% abv spirit is cut to 42.5% using the distillery’s own spring water. Few Irish gin brands are as well known as this one. 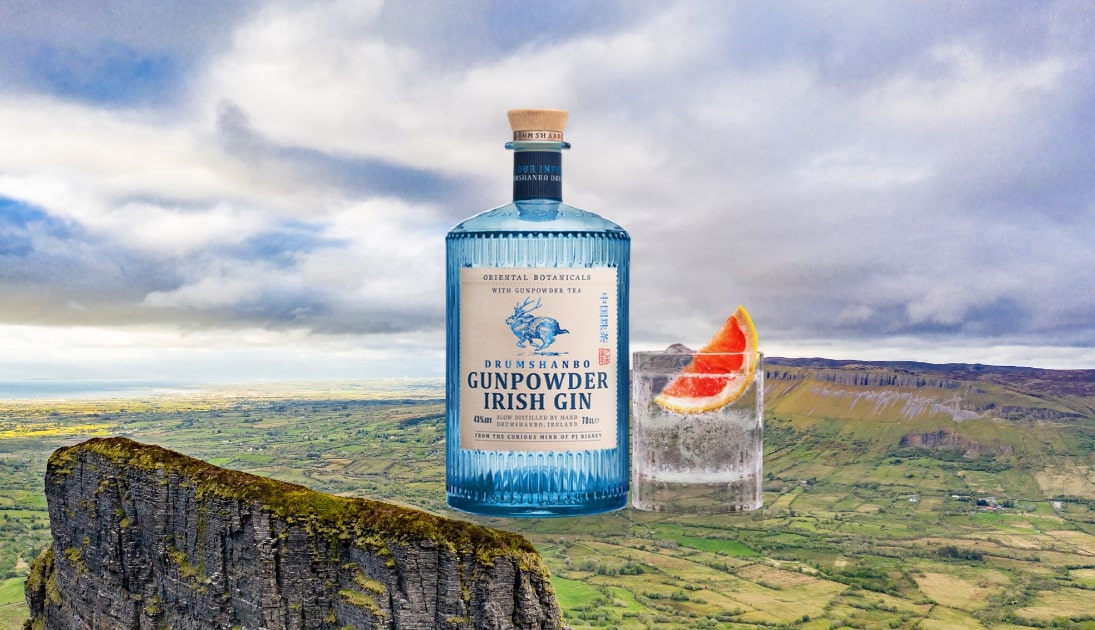 Sold in an aquamarine apothecary-style bottle, Drumshanbo Gunpowder Irish Gin is sure to pep up your glass as it actually contains Gunpowder Tea!

The two-part process stews some of the botanicals in the pot. The gin is then gently vapour-infused with a mixture of Chinese lemon, grapefruit, lime and gunpowder tea.

This unique “secret ingredient” is a type of Chinese tea that is rolled into pellets that resemble gunpowder. The result? A smooth 43% gin with heady citrus notes best accompanied by elderflower tonic. 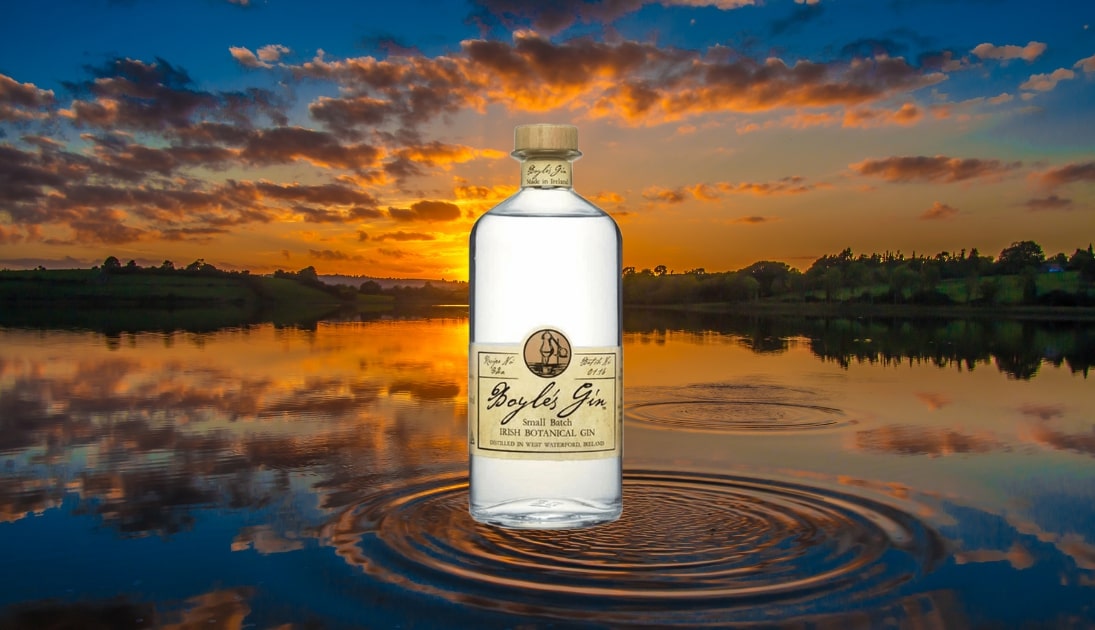 One of the more affordable Irish gin brands is Boyle’s. Winner of the “Best Irish Gin 2016”, Boyle’s Gin is named after Irish alchemist Robert Boyle, who was born at Lismore Castle.

Produced for Aldi by the Blackwater Distillery (established in 2014), this small batch gin is distilled in West Waterford.

Fruity and creamy with an aroma of buttermint, this delectable gin has hints of apple, blackcurrant and elderflower along with the expected juniper, coriander and other un-named flavours.

Delicious with elderflower tonic and a slice of Pink Lady apple to sweeten any residual bitterness. 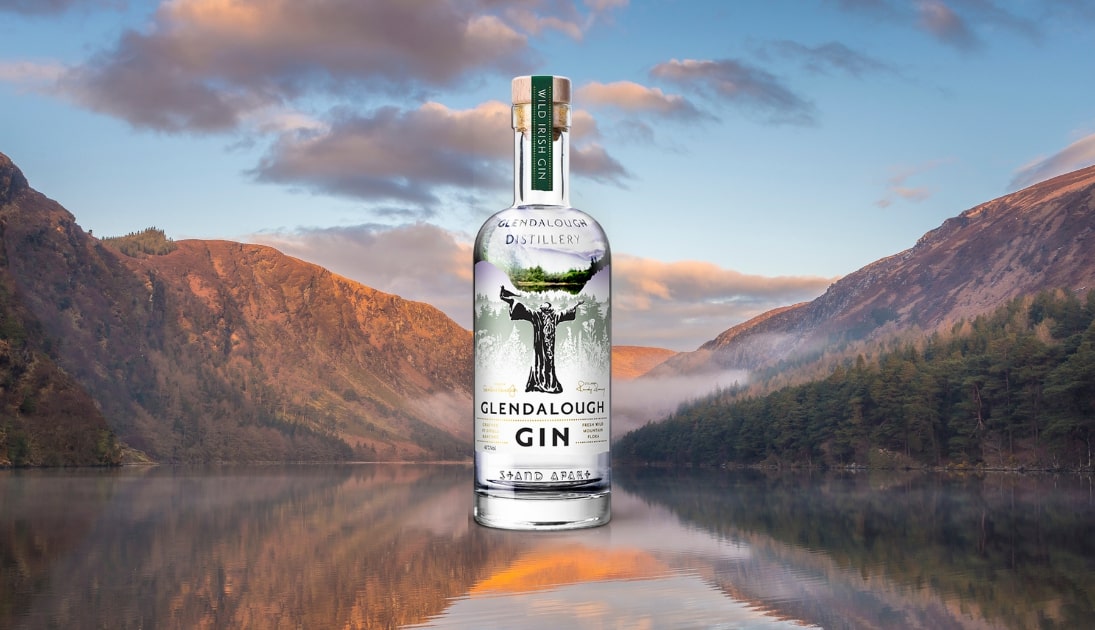 Named Sustainable Distillery of the Year 2021, Glendalough Distillery was established in the heart of Dublin in 2011.

This craft distillery is well known for its innovative whiskeys before turning its attention to producing Glendalough Wild Botanical Gin.

This traditional spirit lives up to its name and heritage by using fresh wild botanicals foraged from the slopes of the Wicklow Mountains.

Inspired by the 6th century monk, Saint Kevin, who made his home in the wild, the dramatic label bears his image.

From an area appropriately known as the Garden of Ireland, this wild botanical gin is created in small batches.

Chinnery is one of the more unique looking Irish gin brands and it stands out with its contemporary label displaying a Georgian townhouse with colourful windows allowing a peek inside.

Launched in 2018, the distillery is named after an 18th century Dublin artist, George Chinnery, who spent time in China. The distillers were keen to recreate the essence of Old China and turned to Chinnery for inspiration.

Unusually, it is distilled in two separate processes, one in Dublin and the other in Cork. Best served with Poachers Wild Tonic and a twist of pink grapefruit peel. 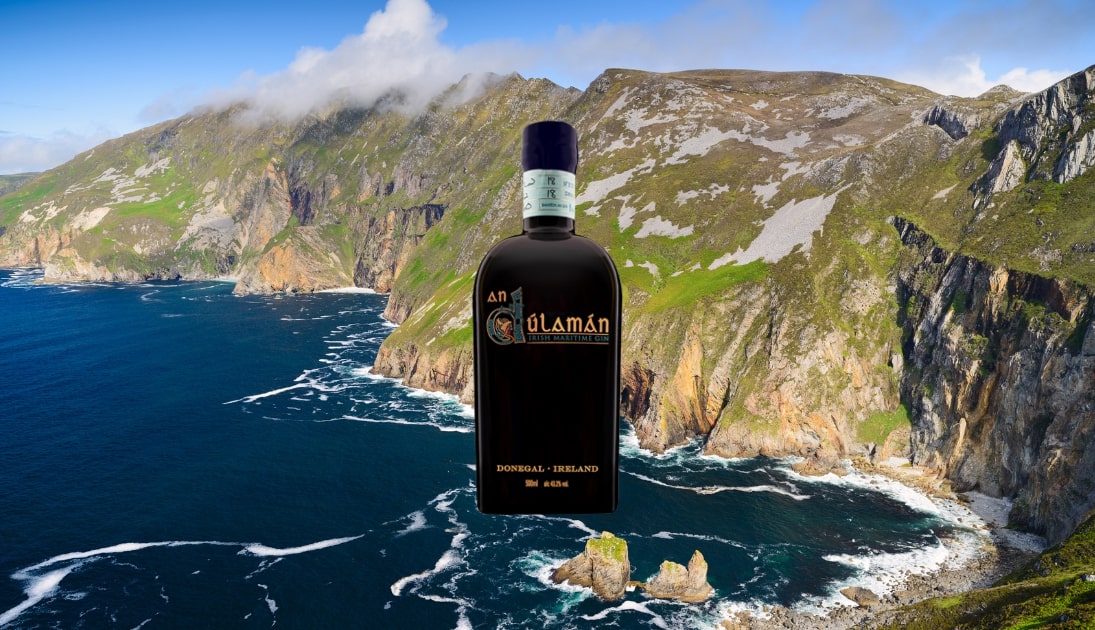 Making history as the first gin ever to be distilled in Donegal, An Dulaman Irish Maritime Gin takes its name from an Irish folk song, and incidentally one of the seaweeds used in the gin.

The bottle itself is a nod to the original wax-sealed bottles found in the wrecks of the Spanish Armada. Not only does the gin have an authentic wax seal, it also bears the lunar phase in which it was distilled.

It will be Ireland’s first Navy Strength Gin at 57%, barrel-aged in Rioja casks for a very special flavour. 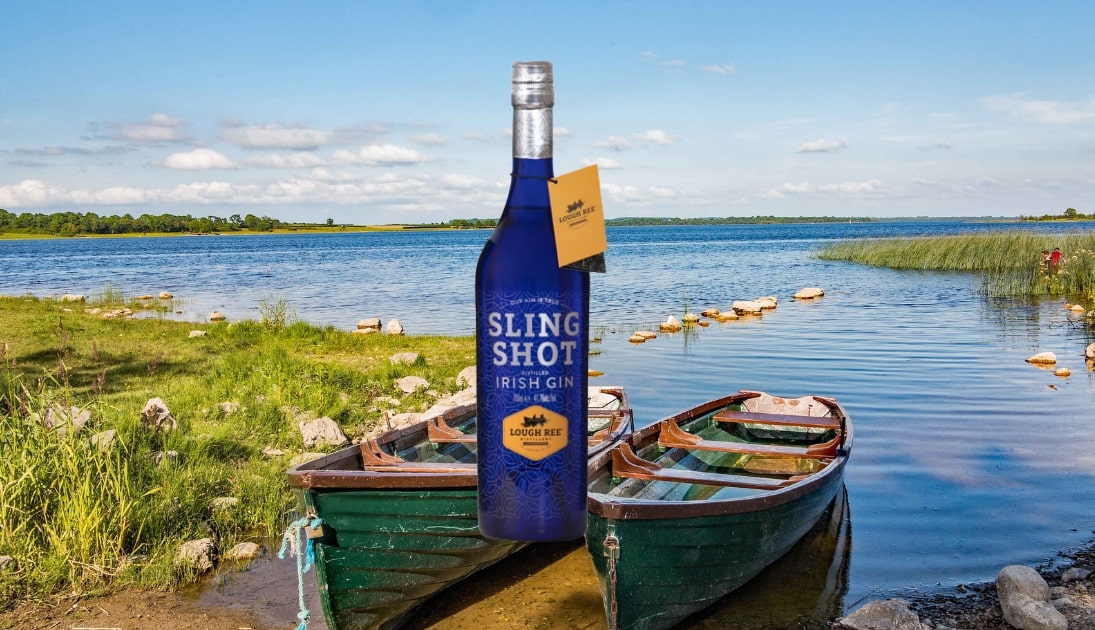 Now that we have what we think are the best Irish gins out of the way, it’s time to see what else is on offer.

Below, you’ll find a mix of well-known and often missed Irish gin brands that are well worth considering.

Made on the 300 acre Echlinville Estate, the Jawbox Classic Dry Gin is situated on the historic Ards Peninsula near Belfast.

This single estate spirit is made with great attention to detail from grain harvested from the estate. Once it has been turned into alcohol, it is used along with 11 botanicals in a triple distilling process in Classic London Dry Style.

The name comes from the Jawbox, the nickname for the Belfast kitchen sink around which much craic was traditionally shared. 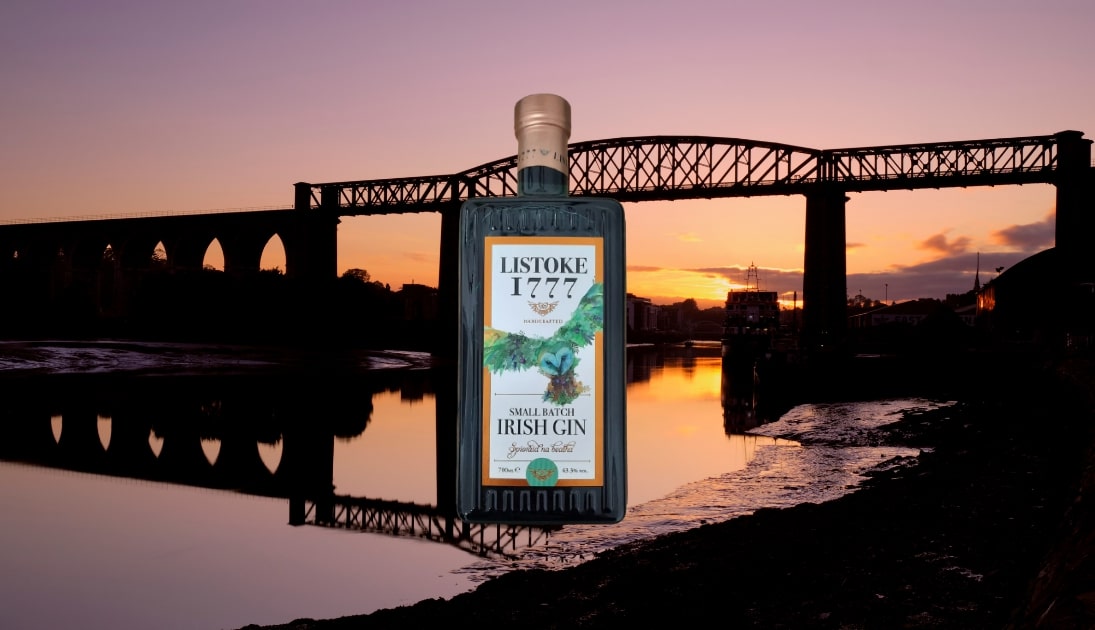 Launched in 2016, Listoke 1777 Gin was conceived in a 200-year-old barn at Listoke House in Co. Louth. It quickly proved popular and moved to permanent premises at Tenure Business Park.

The creators, Blanaid O’Hare and her husband, were inspired to try their hand at creating small batch gin after working in Manhattan in the bar industry.

Three stills are used to create the 43% gin which is flavoured with juniper, rowan berries, cardamom and orange to give a bold aroma and full flavour.

Perfect served with tonic and orange peel. Why not sign up for their Gin School and make your own gin?

Flavoured with earthy Irish peat from Longford, Sling Shot Gin is a contemporary craft gin that only hit the market in 2018.

It marries the essence of classic botanicals (juniper, coriander, angelica, orris root and lemon balm) with citrus, mint and peat to create a very original flavour.

Created at Lough Ree Distillery in Lanesborough, the distinctive name and flavour are matched by a once-seen-never-forgotten bottle of blue glass.

The gin has a citrus aroma followed by a spicy flavour yet remains full bodied and smooth. 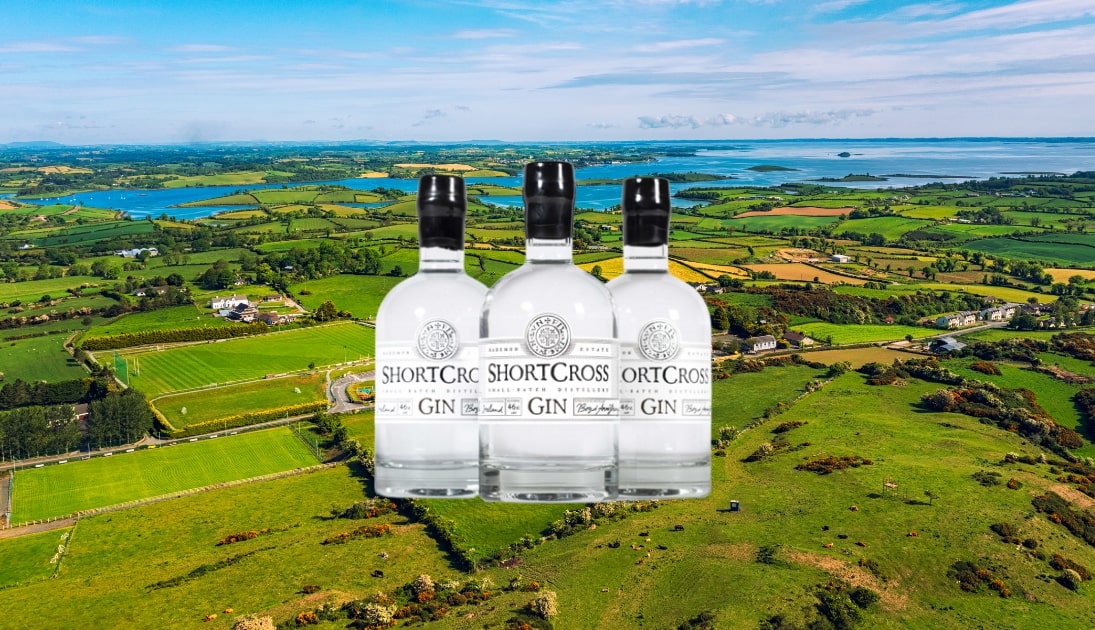 Nestled on the 500-acre Rademon Estate in Crossgar, Co. Down, the distillery was founded in 2012 by husband and wife Fiona and David Boyd-Armstrong. Crossgar is Gaelic for “Short Cross” hence the meaningful name.

They set out to redefine what Irish gin should be, using foraged wild clover, apples, elderflower and elderberries along with juniper, coriander, citrus and their own pure well water to create the perfect balance in taste.

They complete this labour of love by hand bottling and wax dipping every single bottle. 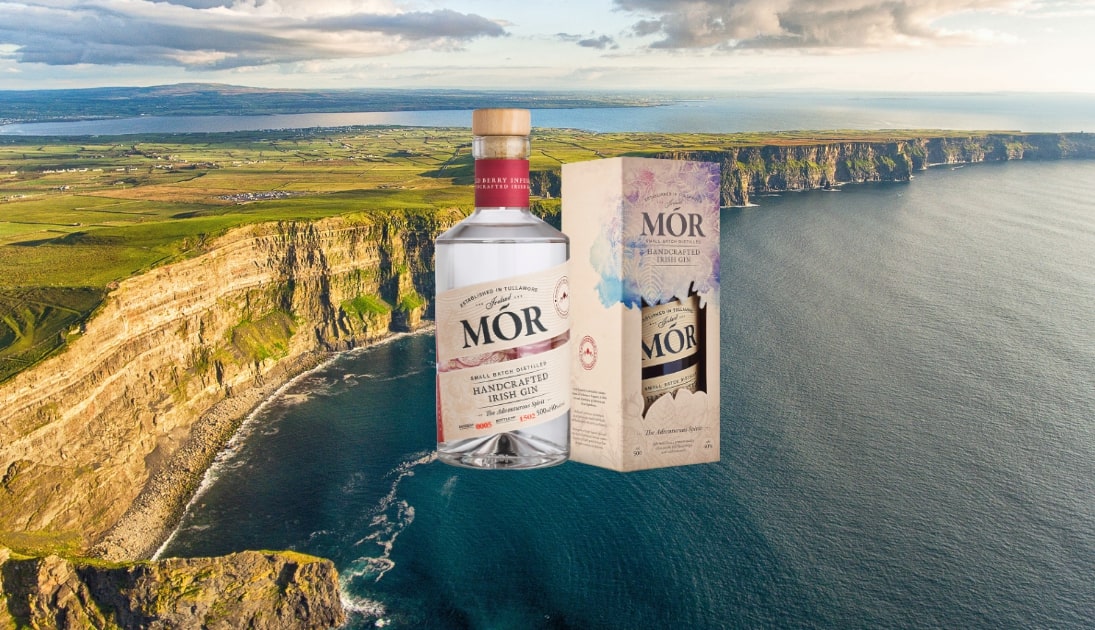 Created in small batches in Tullamore, Co. Offaly this handmade 40% gin contains a raft of botanicals to create “an adventurous spirit for the adventurous of spirit”.

Pure Slieve Bloom mountain water is blended with juniper, angelica root, rosemary and coriander in a recipe that took 18 months to develop and perfect.

It has distinctive notes of blackberry, raspberry and honeysuckle. Due to the changing seasonal flavours, Mor Irish Gin produces three different gins reflecting each botanical season.

For a distinctly tropical gin flavour, try the Caribbean-influenced Pineapple Gin. In our experience, this is one of the best Irish gins to use in cocktails. 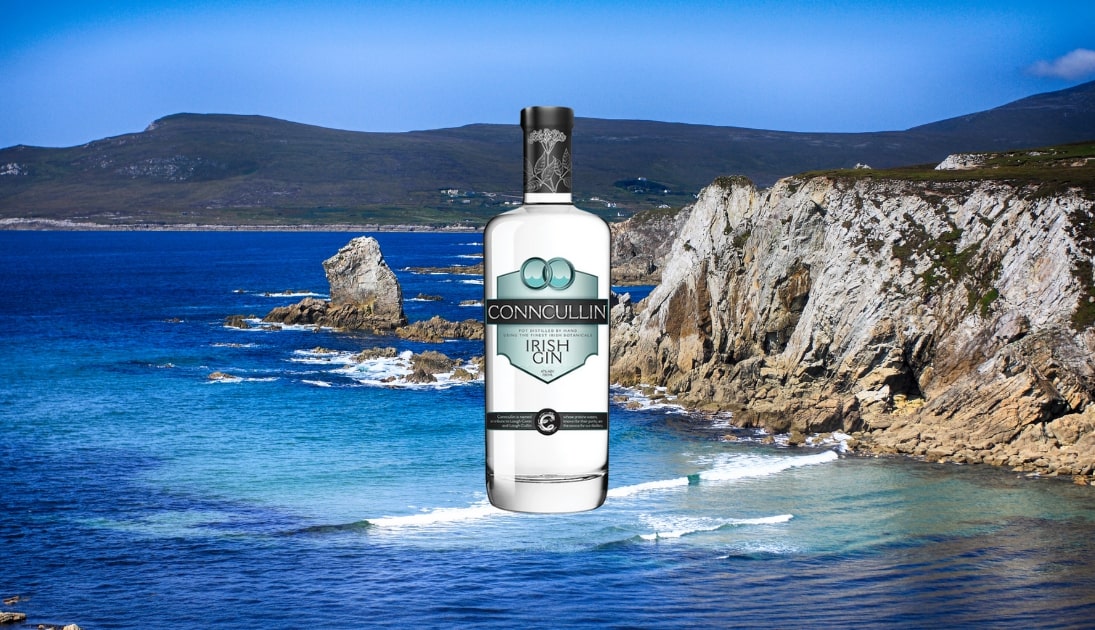 Created and distilled in County Mayo, Conncullin Gin was the first foray into the world of gin by the renowned Connacht Whiskey Company.

This signature gin was produced by award-winning gin-maker, Robert Castell and contains a variety of Irish botanicals including hawthorn berry and elderflower.

The secret recipe includes water from both Lough Conn and Lough Cullin, hence the name. Pot distilled and hand bottled, this Irish gin has a unique flavour without too many flowery notes. Ideal for dry martinis. 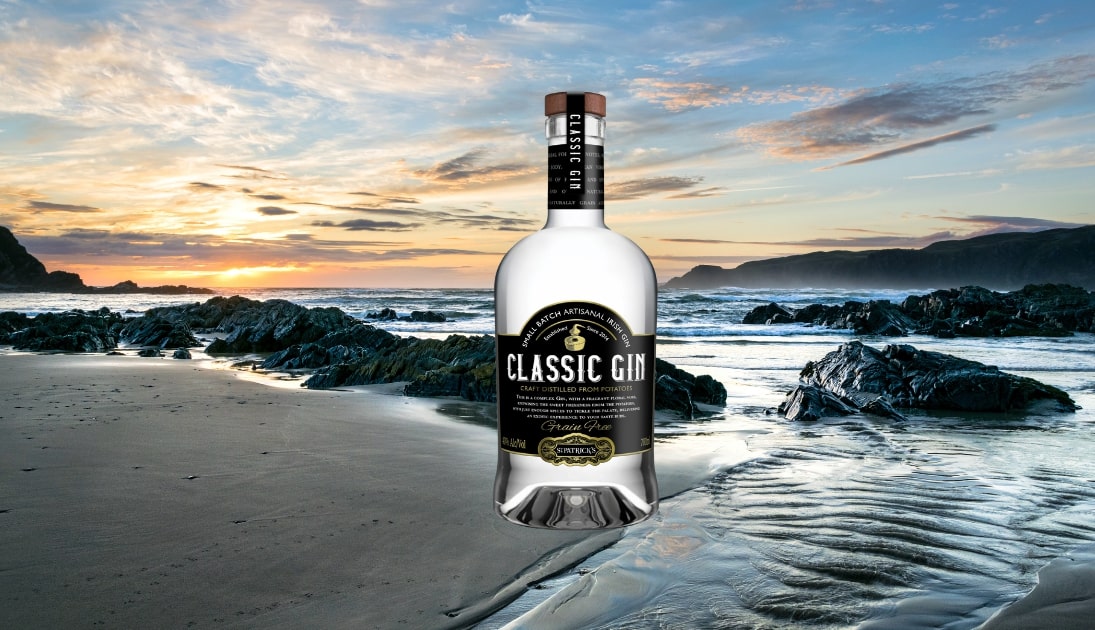 Distilled from potato spirit, the authentic St Patrick’s Elderflower Gin gives off the fragrant aroma and flavour of the elderflower used in the distilling process.

It’s a world-first for potato-based gins and ideal for those who have an intolerance to gluten or wheat. Produced at the St Patrick’s Distillery in Douglas, Co. Cork this gin has aromatics of elderflower and elderberry overlaid with zesty lemon peel.

Orris root, raspberry and violet hit the palate with spicy undertones. The result is a well-rounded gin that’s fruity and not over-sweet. With its elderflower tones, it’s one gin that’s delicious sipped neat.

We’ve had a lot of questions over the years asking about everything from ‘Which make a good gift?’ to ‘Which are the fanciest?’.

What are the best Irish gins?

In our opinion, it’s hard to beat Dingle and Drumshambo, but we’ve a soft spot for Boyle’s and Glendalough Wild Botanical Gin, too!

What are good Irish gin brands to gift?

If it’s for gin drinker, then you won’t go wrong with Jawbox or Drumshanbo. If you want to gift a visually impressive bottle, opt for Chinnery Irish Gin.