There are several places in Ireland that are often referred to as ‘tourist traps’. Blarney Castle is one of them.

Up until 2016, I probably would have agreed with those that labelled it a ‘trap’, even though I hadn’t visited it at that point.

It wasn’t until a wild and wet October morning, on a trip with friends, that I first visited what is often described as one of the best castles in Ireland.

Since then, I’ve never said a bad word about Blarney Castle. In the guide below, you’ll get an insight into the history of Blarney Castle and Gardens, it’s very unique and often-missed attractions along with a load more info.

Some quick need-to-knows about Blarney Castle

A visit to Blarney Castle is one of the most popular things to do in Cork, so it’s fairly straightforward to drop by. However, there are a few need-to-knows that’ll make your visit that bit more enjoyable.

You’ll find the now-iconic Blarney Castle and the world-famous Blarney Stone in the little village of Blarney, around 8km northwest of the buzzy Cork City.

Admission to Blarney Castle is steep enough. Especially if you’re only planning on a fleeting visit. Here’s the prices for 2021 (note: these may change):

Yes, it’s within Cork’s famous castle that you’ll find the world-famous Blarney Stone that supposedly grants all of those who kiss it with the gift of the gab. More below.

A brief history of Blarney Castle and Gardens 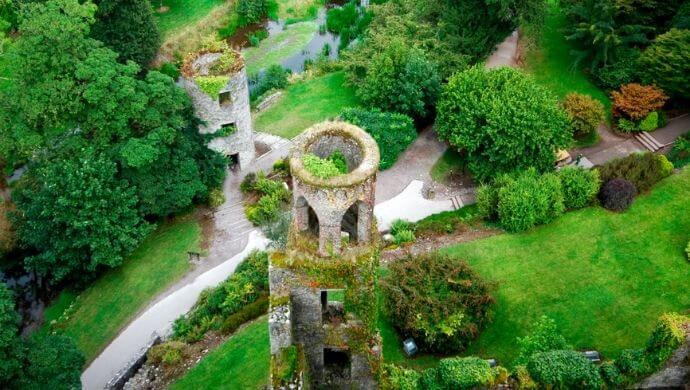 So, there have been three Blarney Castles over the years – the first of which was built from wood many years ago. Here’s an insight into the three castles:

It’s believed that the first castle to be built in Blarney was built from timber, as was the case with many castles in Ireland at the time.

Although the exact date of construction is unknown, it’s believed that it was constructed sometime before 1200.

The second Blarney Castle, which was made from stone, is thought to have been constructed around 1210.

This castle stood until 1446 when it was destroyed. Interestingly enough, it’s believed that the Blarney Stone was placed in the castle during the same year.

The Lord of Muscry, Cormac Láidir MacCarthy, rebuilt the castle not long after. The site was besieged during the Irish Confederate Wars and was seized by Parliamentarian forces a number of years later, in 1646.

After being restored, the castle was given to Donough MacCarty, 1st Earl of Clancarty. Then, during the Williamite War, the castle switched hands again.

It was then that the 4th Earl of Clancarty was overthrown and his estate, which included Blarney Castle, was taken by the Williamites.

The castle was bought and sold by a number of parties before it was purchased by Sir James St. John Jefferyes, the governor of Cork City, at some stage during the early 16th century.

Unique things to do at Blarney Castle and Gardens

There’s plenty more to experience at Blarney Castle other than the stone. In the section below, you’ll find some of the most unique and unusual attractions that the grounds boast.

From incredible views and poison gardens to the witch’s kitchen (yes, a witch!) and a murder hole, you’ll find something below to tickle every fancy.

Many people, myself included, tend to travel to Blarney Castle to see the castle. However, the best part of a visit here, in my opinion, is the castle grounds.

On the day that we visited, the weather was miserable. We grabbed a coffee from a little cart (I’m not sure if this is still here) and had a wander around.

The best place to get a look at the sheer size of the 60 acres of lush gardens and parklands is from the top of the castle. The view from here is will knock you sideways.

2. One of the only Poison Gardens in Ireland

Interestingly enough, you’ll find one of the few Poison Gardens in Ireland in Blarney Castle, not far from the Castle battlements.

It’s within the walls of this garden where a number of plants reside that are so toxic that some have to be contained in cage-like structures.

Inside, you’ll find a collection of poisonous plants from right across the world, including Wolfsbane, Mandrake, Ricin and Opium. Naturally enough, you enter this part of the grounds at your own risk.

Yes, the Murder Hole. Sounds very mysterious altogether, doesn’t it?! You’ll find the Murder Hole on the second floor of the castle, where it’s blocked off with an iron gate.

The Murder Hole was used when the castle walls were breached and the enemy was running about inside. The hole was used by those defending the castle to pour boiling liquids on top of unsuspecting invaders.

The Wishing Steps are missed by many that come to Blarney solely to visit the stone. The steps are found within an area known as ‘Rock Close’.

It’s said that if you can walk down and back up these steps with your eyes completely closed while making a wish (without stopping), your wish will come true within a year.

Yes, the Witch’s Kitchen. See there’s plenty more to this place than an aul stone! It’s believed that an area known as the ‘Witch’s Kitchen’ was home to the first Irish cave dwellers.

It’s said that, if you arrive at the kitchen in the early morning, you’ll find the remains of a fire that was lit by a witch late the night before.

You’ll find a number of dark passages and chambers in the area right below the castle. Each section is believed to date from different periods and the majority of them are accessible. One of the most interesting sections of the dungeon is what’s believed to be the castle’s prison. 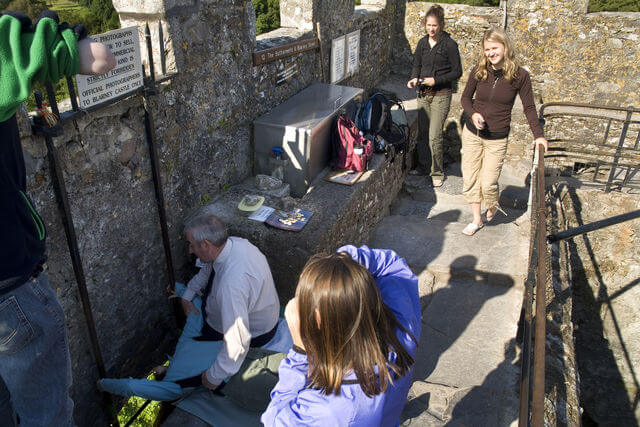 Ah, the Blarney Stone. It’s arguably one of the best-known (and oddest) attractions in Ireland with hundreds of thousands of people planting their lips on it every year.

For a whopping 200 years, Hollywood actors, literary greats and many a man, woman and child have travelled to Cork to with the intention of kissing the stone.

Kissing the Blarney Stone is on the bucket list of many a tourist that’s visiting Ireland for the first time. Back in the day, visitors to the castle had to be held by the ankles and lowered down to kiss it.

Can you imagine trying to get insured for something like that now… Today, kissing the stone is an awful lot more straightforward – the stone is set into the wall right below the battlements.

In order to give it a big aul kiss, you need to lean backwards (you’ll have an iron railing to cling onto), stick your head under the stone wall (pictured above) and plant your lips on it.

The Stone of Eloquence and the Gift of the Gab

However, the more appropriate translation for the Gift of the Gab is that those who possess it are said to be able to chat away easily and confidently.

Things to do near Blarney Castle in Ireland

One of the beauties of the castle is that it’s a short spin away from a clatter of other attractions, both man-made and natural.

Below, you’ll find a handful of things to see and do a stone’s throw from Blarney (plus places to eat and where to grab a post-adventure pint!).

There are heaps of things to do in Cork City, from the brilliant Cork Gaol and Elizabeth Fort to Blackrock Castle, St Fin Barr’s Cathedral and much, much more. 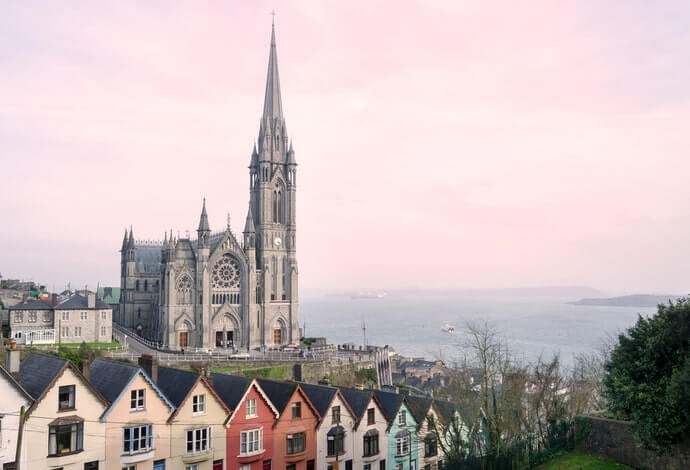 The towns of Midleton, Kinsale and Cobh are a short, 40-minute spin from Blarney Castle, and both are home to loads to see and do. Here are some guides to hop into:

We’ve had a lot of questions over the years asking about everything from kissing the Blarney Stone to when the grounds are open.

Is Blarney Castle worth visiting or is it a tourist trap?

If you’re only looking to see the stone and you’re not interested in exploring the castle itself and admiring the grounds, don’t bother. If you fancy exploring an Irish castle that boasts some of the most impressive grounds of the many castles in Ireland, Blarney is well worth a visit.

What is there to do at Blarney Castle?

Stone aside, there are plenty of things to do at Blarney. You can explore the gardens, see the poisonous plants, visit the witches kitchen, see the wishing steps and plenty more.

Blarney Castle is opened and operated by Sir Charles Colthurst and his family.