Since penning a guide on things to do in Shannon a while back, we’ve received a constant stream of emails about Bunratty Castle and Folk Park.

In the guide below, we’re going to tell you everything there is to know about it, from the history of Bunratty Castle and Folk Park and where it all began to the folk park and more.

You’ll also get a load of info on the Bunratty Castle Medieval Banquet (worth doing by the looks of it) and where to stay nearby.

Some quick need-to-knows about Bunratty Castle and Folk Park 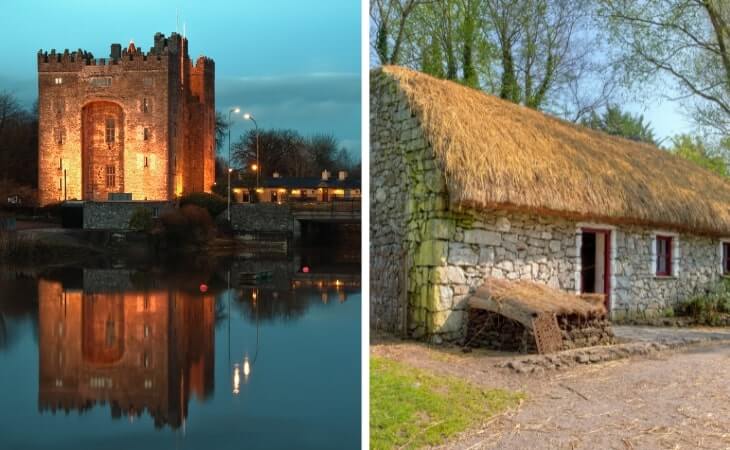 Although a visit to Bunratty Castle and Folk Park is fairly straightforward, there are a few need-to-knows that’ll make your visit that bit more enjoyable.

You’ll find the mighty 15th century Bunratty Castle in Clare, in the heart of Bunratty Village. The castle is a stone’s throw from Shannon Airport, which makes it the first stop for many tourists flying in.

Named after the River Raite which runs alongside it, the site on which the current structure stands has been constantly occupied for over 1,000 years.

The castle was restored to its former glory in the 1960s and it is now home to a fine collection of medieval furniture and artefacts. The castle grounds are also home to the Bunratty Folk Park, which has racked up some seriously good reviews online. More on this in a minute.

At the time of typing, tickets for Bunratty Castle and Folk Park will set you back €10 for an adult and €8 for a child (4 – 18yr) (book tickets/check latest prices here).

The history of Bunratty Castle is a colourful one. Robert De Muscegros built the first defensive fortress on the site in 1250.

The current castle is one of the most impressive medieval fortresses that you’ll find in Ireland. It was built in 1425 and then restored to its former glory in 1954.

According to the Annals of the Kingdom of Ireland (a chronicle of Irish history from prehistory to 1616 AD), there was a Norsemen settlement on the site of Bunratty Castle as early as 977.

It’s recorded in the Annals that the settlement was destroyed by Brian Boru – the last great High King of Ireland. Many years later, in the mid-1200s, Robert De Muscegros is believed to have built a motte and bailey castle here.

The Arrival of a Stone Castle

In 1276, the land was taken back by King Henry III and given to a lad named Thomas De Clare, who constructed the first stone castle on the site.

The castle was used as a place of residence from 1278 to 1318. It’s believed that this castle stood on the same site as the current Bunratty Castle (or at least very close to the current structure).

The Fall of the Second Castle

The castle saw a fair bit of action in the years that followed. It was attacked a number of times by the O’Brien Clan and then eventually destroyed in 1284.

De Clare rebuilt the castle in 1287 and it held up well against a number of other attacks. Alas, in 1318, it fell again and De Clare and his son were killed during the battle.

The third structure at Bunratty wasn’t built until the 14th century. It was constructed by the English in an attempt to guard access to the Shannon estuary.

In 1353, an English army succeeded in conquering the MacNamara and MacCarthy clans and they went on to construct the third castle.

The exact location of this castle is also unknown, but it’s believed that it may have stood where Bunratty Castle Hotel stands today. Construction of the third castle was only just completed when it was captured by the Irish.

The fourth structure is the one that stands proudly in all its glory to this day. It was built by the MacNamara clan around 1425. As was the case with many of the castles in Ireland, the current castle passed through many hands.

In and around 1500, the castle fell into the hands of the O’Brien Clan. They built on the site and expanded it. Later, in 1588, the castle was taken by a lad named Thomas Radclyffe, who was the Lord-Lieutenant of Ireland.

The castle remained under the O’Briens for many years. Then, in 1712, the castle was sold to a fella named Thomas Amory, who then sold it to a bloke named Thomas Studdert.

Studdert and his family let the castle to fall into disrepair, opting to reside in the nearby house. Many years later, in the mid 19th century, the castle was bought and restored by the 7th Viscount Gort.

The castle opened to the public for the first time in 1960 and it showcased works of art that dated back to the 1600s, along with ancient furniture and tapestries.

Things to do at Bunratty Castle Folk Park in 2022

If you’re planning on visiting Bunratty Castle and Folk Park soon, there’s plenty to see and do to keep you (and the kids) occupied for the duration of your visit.

From a medieval dinner and a pet farm to the castle and the stunning walled garden, you’ll find something to tickle every fancy in the section below.

The Bunratty Castle Banquet Dinner tends to be the most popular thing to do among those visiting. It’s at one of the medieval banquet nights that you can experience what life in medieval Ireland was like.

A whopping 3 million people have tried the medieval banquet over the years! Those that opt for the dinner will be treated to a 4-course meal with entertainment provided by the castle’s singers (get your ticket here).

The Castle Folk Park is set on 26 acres and is home to a ‘living village’. Those that visit can have a ramble around over 30 buildings, with everything from a farmhouse to village shops on display.

The Castle Folk Park has been set up to resemble what a village would have looked like at a time when life at the castle was in full swing.

If you’re visiting the Folk Park with some hard-to-amuse kids, take them for a run about in the Viking Playground. It’s home to four wooden towers, rope walks, a 25m zipline and a load of swings.

Drop into the nearby cafe in advance and grab a coffee to keep you going while they leg it about the place!

Many that visit the Castle Folk Park miss out on the beautiful walled garden at Bunratty House.

The garden was built many years ago, around 1804 and it’s the perfect spot for a post-dinner ramble.

We’ve had a lot of questions over the years asking about everything from the history of Bunratty Castle and Folk Park to what to see nearby.

Is Bunratty Castle and Folk Park worth visiting?

Yes, Bunratty Castle and Folk Park is well worth a visit. The set-up here is done incredibly well and there’s plenty to keep you interested for several hours.

Bunratty Castle and Folk Park reopened on April 30th as an outdoor experience.

How much does it cost to visit Bunratty Castle?