A spin out to see the fairytale-like Classiebawn Castle is one of the more popular things to do in Sligo.

You’ll find Classiebawn Castle standing proudly in Mullaghmore, where it has be since 1874.

The castle received world-wide attention last year after it was featured in series 4 of ‘The Crown’ – a TV series about about the reign of Queen Elizabeth II (more on this in a minute).

In the guide below, you’ll get an insight into the history of Classiebawn Castle, which includes everything from land theft to the assassination of Lord Mountbatten.

Some quick need-to-knows about Classiebawn Castle in Sligo 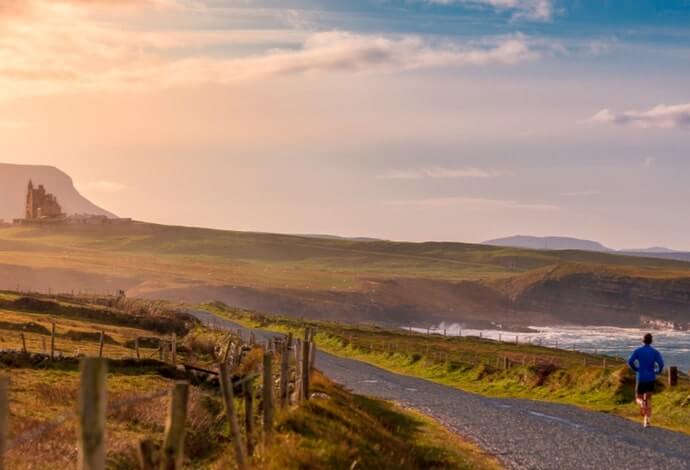 So, you can’t visit Classiebawn Castle in Mullaghmore, but you can see it from various places on the peninsula. Here are some quick need-to-knows.

Mullaghmore Castle is owned by the estate of Hugh Tunney. And, as the castle is located upon 3,000 acres of private land, you can’t get close to it.

You can admire Classiebawn Castle from afar if you head off on a ramble around Mullaghmore. You’ll be treated to mighty views of the castle with the backdrop of Bunbulben mountain.

Classiebawn received a surge of attention last year when it was featured in series 4 of ‘The Crown’. You’ll find the full Royal Family connection below.

How Mullaghmore Castle came to be 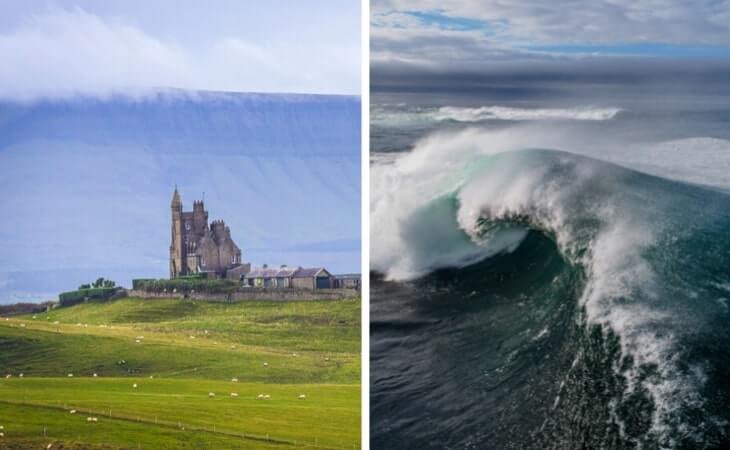 The history of Classiebawn Castle is an interesting one. The castle was built on what was once a 10,000-acre estate on the Mullaghmore peninsula in County Sligo in the west of Ireland.

Like many Irish castles, Classiebawn passed through many hands over the years. In the section below, you’ll get a speedy insight into the history of the castle, many of those who owned it, and how you can see it today.

The theft of land

Before we get into the story of how Classiebawn Castle came to be, it’s worth mentioning that the land upon which the castle is built was confiscated by the English Parliament from an Irish family.

Yes, that old story once again. The land in Mullaghmore was owned by the O’Connor family, but it was taken by the English to compensate those that succeeded in stopping an Irish rebellion.

The building of Classiebawn Castle in Sligo (which was made primarily of stone from Donegal) was started by the third Lord Palmerston, who was once Prime Minister of the UK.

However, he died in 1865, long before the construction of Mullaghmore castle was completed. It wasn’t until his stepson, the first Lord Mount Temple, took over that Classiebawn was completed in 1874.

The early days at Classiebawn Castle 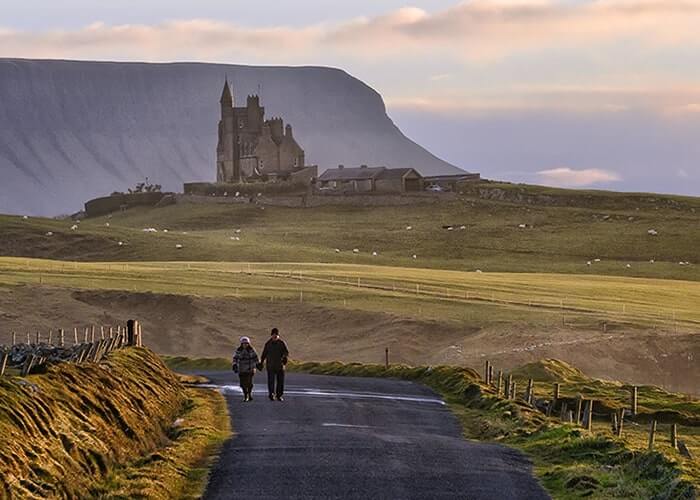 After the first Lord Mount Temple died in October of 1888, the Mullaghmore estate was inherited by his nephew, The Honourable Evelyn Ashley.

When he died in 1888, his son, Colonel Wilfrid Ashley, inherited the estate and became the second Lord Mount Temple.

Before the Irish Rebellion began, Classiebawn Castle was mainly used as a holiday home, of sorts. In the winter, the castle was used as a shooting lodge and in the summer it was used as a base for the family while they fished.

Classiebawn Castle was commandeered by the Irish Free State Army during the rebellion and was used primarily as an army barracks.

A flag was flown and the army protected the castle and its estate. When the rebellion ended, the castle was handed back to Lord Mount Temple. 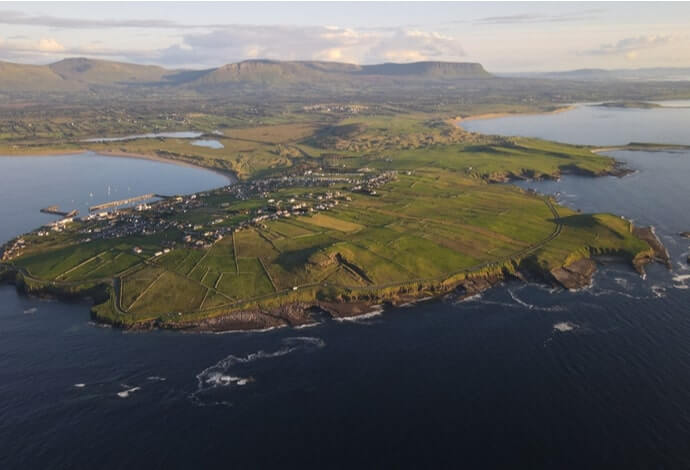 Classiebawn Castle has a very strong link to the Royal Family. In 1939, Edwina Cynthia Annette Mountbatten, Countess Mountbatten of Burma inherited the castle.

She and her husband, The 1st Earl Mountbatten of Burma, made a number of upgrades to the castle, like the installation of electricity and the addition of water mains.

Although Countess Mountbatten died in 1960, Lord Mountbatten continued to visit the castle during the summer for many years.

The Assassination of Lord Mountbatten

On a sunny day in August of 1979, Lord Mountbatten was assassinated not far from Classiebawn Castle, while in a fishing boat in the water off Mullaghmore.

Thomas McMahon, a member of the IRA, made his way onto the boat the night before and attached an explosive that could be controlled remotely.

There were a number of people on-board when the explosion went off, including Lord Mountbatten, his grandsons (Nicholas and Timothy) and Paul Maxwell – a member of the fishing crew.

It’s believed that there was another assassination attempt a year earlier, in 1978. It’s alleged that the IRA attempted to shoot Lord Mountbatten while he was on his boat, but that bad weather prevented a sniper from taking a shot.

Things to do near Classiebawn

One of the beauties of Classiebawn Castle is that it’s a short spin away from many of the best places to visit in Sligo. 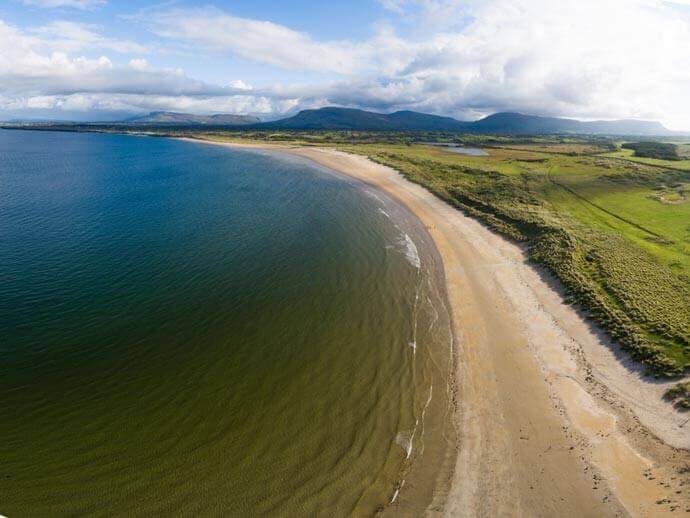 The beautiful Mullaghmore Beach is a short, 5-minute spin from the castle and it’s a great spot for a saunter along the sand. If you fancy a bit of food, Eithna’s By The Sea and the Pier Head Hotel are two solid options. Streedagh Beach is also just 15 minutes away. 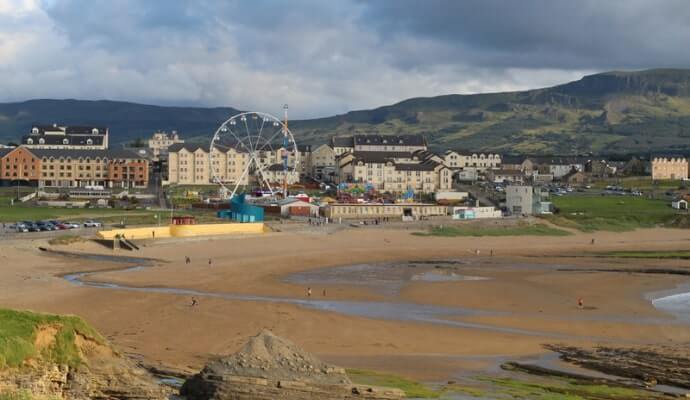 Photo by LaurenPD on shutterstock.com

Bundoran (Donegal) is another hand spot to visit. There’s plenty of things to do in Bundoran and there are several great restaurants in Bundoran if you’re feeling peckish. 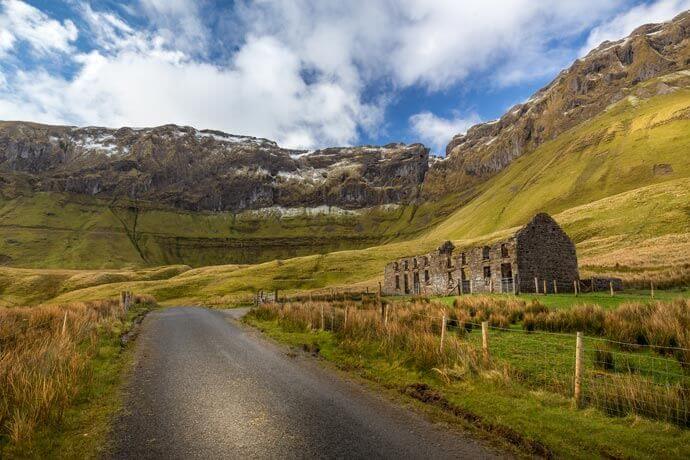 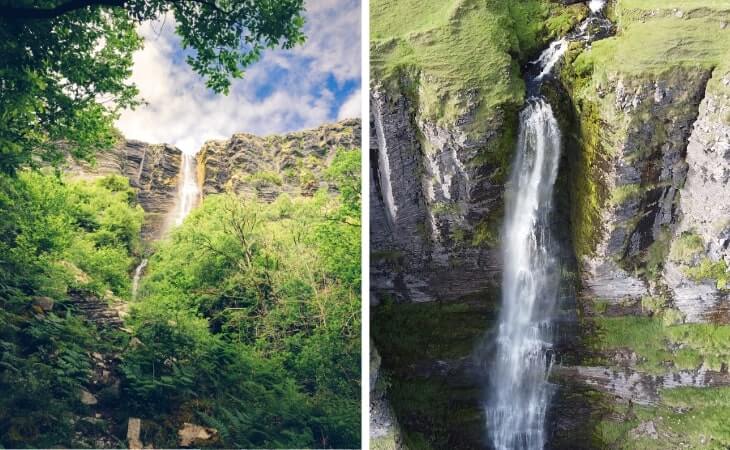 The incredible Devil’s Chimney (only runs after heavy rain) and the brilliant Glencar Waterfall (Leitrim) are a short spin from Mullaghmore Castle. There are plenty of other walks in Sligo close by, too!

FAQs about Classiebawn Castle in Sligo

We’ve had a lot of questions over the years asking about everything from is this the ‘Mountbatten Castle’ to can you actually visit it.

Can you go inside Classiebawn Castle?

Unfortunately, as the castle is located upon 3,000 acres of private land, you can’t get close to it, let alone go inside.

You can see the castle while walking or driving around the coast of Mullaghmore. It’s clearly visible against the backdrop of Benbulben.

Mullaghmore Castle is owned by the estate of Hugh Tunney. And, as the castle is located upon 3,000 acres of private land, you can’t get close to it.