Many people that visit Kilkenny miss out on one of the best places to visit in the county – Dunmore Cave. If there’s anywhere in Ireland that’s haunted, it’s here.


‘Eh, hold on a minute pal – I’ve been to Kilkenny LOADS of times, and I’ve never seen OR heard of this place’.

Around 11km north of Kilkenny City, and just a stone’s throw from the former mining town of Castlecomer, lies Dunmore Cave.

The earliest mention of Dunmore Cave dates back to a 9th century Irish triad poem, where it’s chillingly referred to as ‘the darkest place in Ireland’.

There’s no real mystery why.

In 928 AD, Dunmore cave witnessed the slaughter of 1,000 people at the hands of the Vikings.

Here’s a look inside the cave before we delve into what happened.

Read more: Check out our guide to the most unique things to do in Ireland.

A Tale of Murder and Greed

Around 928 AD, the Vikings of Dublin were en route to attack their rivals in Waterford.

As they made their way south, they the raided and pillaged all around them.

When they arrived at Dunmore Cave, they discovered that a large number of people (mainly women and children) were taking refuge inside. 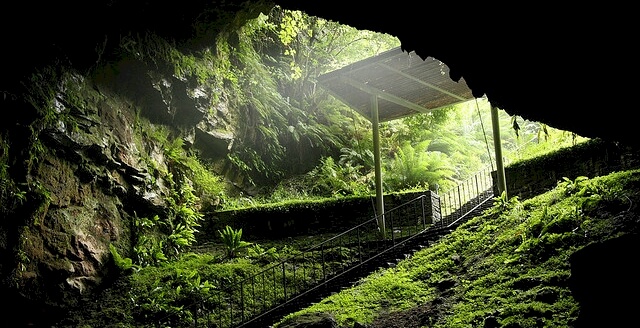 Recognising an opportunity to grow their ill-gotten weatlh, they decided to capture those hiding in the cave, and sell them on as slaves.

The Vikings lit large fires at the mouth of the cave in an attempt to smoke those inside out.

However, all didn’t go to plan.

The fires got out of control and consumed the caves oxegen, causing those inside to suffocate.

Wait – How do we know that any of this is true?

There’s concrete evidence that Vikings returned to Dunmore Cave after the massacre to hide items they wished to conceal.

In 1999, items made from silver and copper-alloy were discovered within a cleft, deep inside the cave.

Silver ingots and conical buttons were part of the discovery, and dated back to 970 AD.

‘Tis in a buke

OK, so not any aul buke, but the tragic event is documented in the Annals of the Kingdom of Ireland.

The Annals are a chronicles of Ireland’s medieval history, with entries spanning from 2,242 years after creation to AD 1616.

The discovery of bones

They bones were mainly those of women and children, which would tally up with the account outlined in the Annals.

If you’re looking for things to do in Kilkenny on your visit, you need to add this to your to-see list!