The Erris Head Loop Walk is one of my favourite things to do in Mayo.

A spectacular walk that can be completed in under 2 hours, the Erris Head Loop Walk winds around the headland of, yep, you’ve guessed it, Erris Head!

This is a nice and easy walk that’ll treat you to stunning views and the kind of wild, unspoild scenery that you’ll only find along the North Mayo coast.

In the guide below, you’ll find everything you need to know about the Erris Head walk from where to starts to what to look out for on the way.

Some Quick need-to-knows about Erris Head 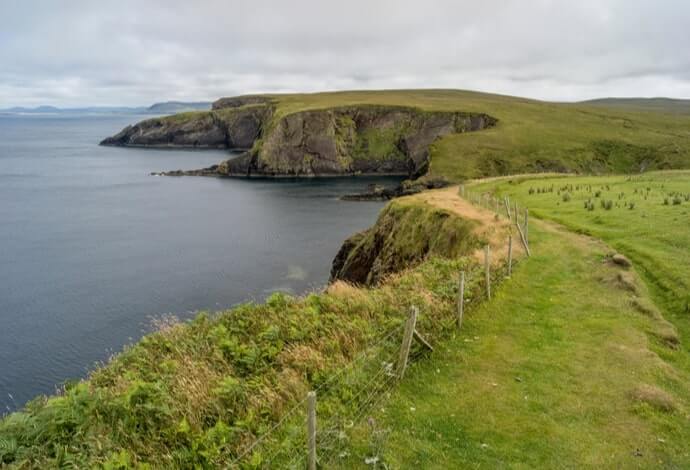 Although a visit to Erris Head in Mayo is fairly straightforward, there are a few need-to-knows that’ll make your visit that bit more enjoyable.

Take the R313 from Belmullet for about 4km and then turn off for Ceann Iorrais. A car park heralds the start of the trail giving you a taste of the views to come as it overlooks a secluded harbour intriguingly called the Danish Cellar.

Erris Head is a conservation area with an abundance of diverse flora and fauna. Irish crows (or choughs) and fulmars nest on the mountains while gannets and guillemots fish the waters. You may be lucky enough to see a couple of hares boxing in the grassland or view the Bottlenose dolphins, porpoises, and seals in the Atlantic Ocean below.

At approx. 5km, it’s not a challenging walk, but the weather plays a big part, and you need hiking boots to traverse the boggy areas. If you want to stop for a picnic, there’s a point about halfway where you can see Eagle Island and its lighthouse. Quite a lot of the walk is uphill, but it’s gradual, and the higher you climb, the more spectacular the views.

There’s a little car park right at the start of the trail. Just stick ‘Erris Head Loop Walk’ into Google Maps. It’ll take you to the point here where the walk kicks off.

A guide to the Erris Head Loop Walk 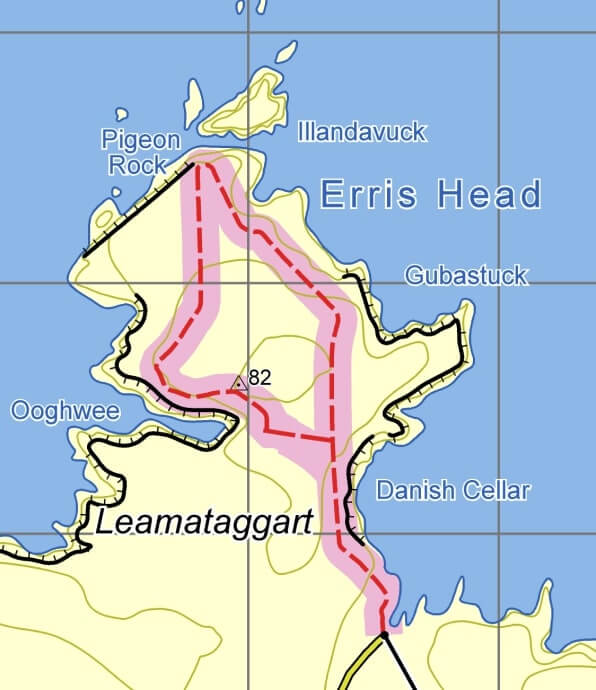 The Erris Head Loop Walk mainly follows an old earth bank around the headland, with a couple of stiles and a footbridge to cross along the way.

At the top of the loop, which is the tip of Erris Head, you can stop to take in the dramatic views of the North Atlantic with its rugged islands and remarkable sea arches.

Where it starts and ends

The journey begins at the Erris Head Loop Walk car park, as it’s named on Google Maps. There’s room for around 11 cars to park up here.

The first part of the Loop

You’ll cross your first stile into a field as you leave the car park. Follow the fence on the right through 2 fields to reach the earth bank, which provides an easy walking surface for nearly half your journey.

You reach a wooden footbridge after about 300m and continue straight on to the end of the earth bank near the top of the loop. From here, take a sheep track to a viewing area from where you can see Illandavuck Island, Pigeon Rock, and sea arches.

The Ups and Downs of the Loop

Take a sharp left from the viewing area, and a gentle climb takes you to the old Coast Watch station. A descent now winds around the north of Ooghwee inlet and down to a structure that served to gather information for the Meteorological Service.

You head on down again, and after a few hundred metres, you’re back on the earth bank. This leads you to the fields, which loop back to the trailhead and the car park.

An area rich in biodiversity, keep your eyes peeled for Irish hares, several bird species and dolphins, seals, and porpoises.

Things to see near Erris Head

One of the beauties of doing the Erris Head Loop Walk is that, when you finish, you’re a handy spin from some of the best things to do in Belmullet.

Below, you’ll find a handful of things to see and do a stone’s throw from Erris Head, from islands and beaches to sea stacks and more.

Lying off the coast of the Mullet peninsula are the Iniskea (Goose) Islands, Inishkea North and Inishkea South, and the smaller Rusheen Island, where a Whaling Station existed from 1907 to 1913. The two main islands contain mica minerals which cause them to shine green and sliver from a distance. A haven for wildlife and with more than 200 plant species, it’s well worth a visit. 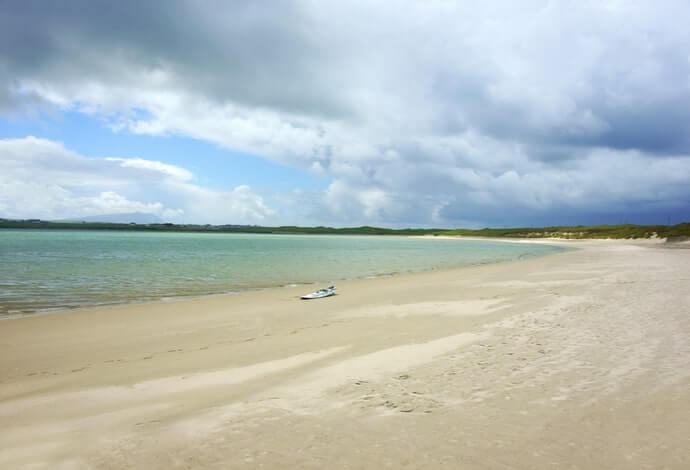 Only 9km from Belmullet, you’ll find the beautiful Elly Bay – one of our favourite beaches in Mayo. Its sheltered location makes it perfect for surfing. There are 2 beaches divided by the main road to Blacksod. A fine spot for a ramble. 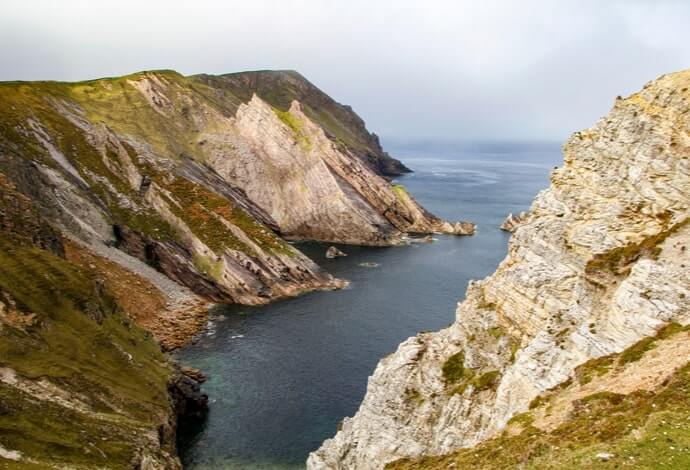 At 255m, Benwee Head is higher than the Cliffs of Moher. If possible, try to view these cliffs from the ocean to get a sense of how impressive they are, more so because the north side drops vertically into the Atlantic. Towering over Broadhaven Bay, there are marked trails along the cliffs, and you can get a map in the nearby village of Carrowteige 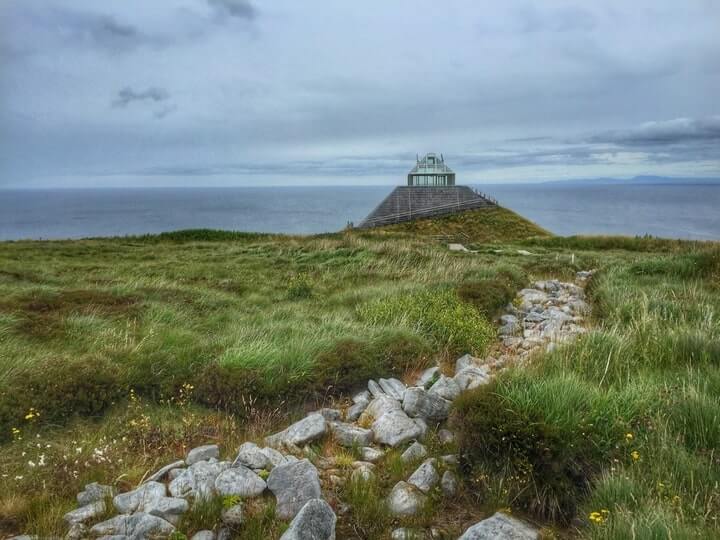 The Ceide Fields (flat-topped hill fields) is the largest Neolithic site in Ireland, dating back 5500 years. They were first discovered in the 1930s when a local teacher cutting turf noticed stones under the peat, which meant they had to be placed there before the bog developed. The site is currently on UNESCO’s tentative list for World Heritage status. 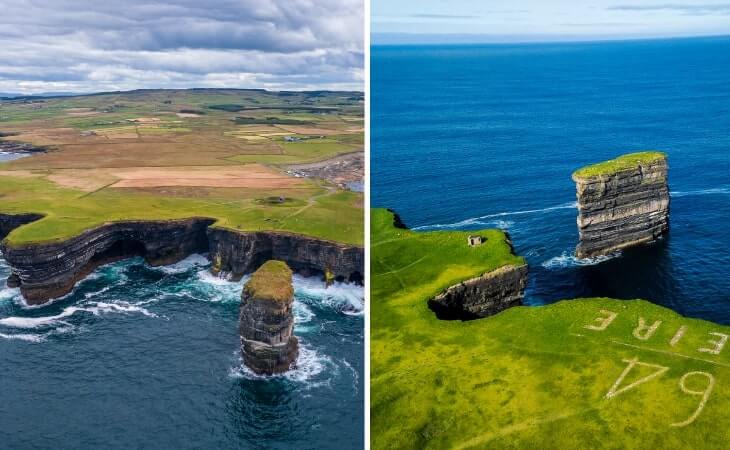 Dún Briste Sea Stack (the broken fort) was cut off from the headland in a massive storm in 1393. The local who discovered the Ceide Fields, and his son, were brought by helicopter to explore the top of the fort and found remains of 2 buildings and field walls. The views from the spongey green grass are incredible.

FAQs about the Erris Head Walk

Since mentioning this walk in a guide to Mayo a few years ago, we’ve had heaps of emails from people asking for more info on the walk.

How long does the Erris Head walk take?

The loop walk takes around 2 hours, but allow more time for soaking up the views.

Is the walk hard?

If you do this walk on a clam day, it should prove too difficult. If you do it when it’s windy (which tends to be the case a lot in this part of Ireland), you’ll be battling the wind, which adds to the effort required.

Where does the Erris Head walk start (and is there parking)?

The walk starts in the Erris Head car park. Stick ‘Erris Head Walk’ into Google Maps and you’ll find it.

A very well marked path that took us 1.5 hours. We wore boots but it wasn't boggy at all and shoes would have been fine. We had the path to ourselves and the views were really nice. It is busier at weekends and there is a coffee van at the parking lot then.