For new visitors to the city, getting around Dublin and, particularly, getting to know the ins and outs of public transportation in Dublin, can be tricky.

Can be tricky. However, once you get the hang of it, you’ll be zipping around the city car-free without much stress.

From the DART and the Luas to Dublin Bus and Irish Rail, there are numerous ways for getting around Dublin, regardless of where you’re staying.

In the guide below, you’ll discover everything you need to know about using public transportation in Dublin. Dive on in!

Some quick need-to-knows about getting around Dublin

So, public transportation in Dublin can be confusing, and there’s some things to get your head around before you look at each method of getting around Dublin.

While it doesn’t boast an underground rapid transit system like larger European capitals, Dublin is still crisscrossed by a network of efficient public transport routes. The traditional rail system is complemented by the DART commuter rail network and, more recently, two light rail/tram lines called the Luas. There are also a ton of Dublin Bus routes stretching all over the city.

2. Picking a good base is key

If you pre-plan ahead you’ll save time and money when you arrive. Decide the things you’d really like to see in Dublin (see our Dublin attractions guide), first, and this’ll give you an idea of where to stay in Dublin. Work out the most cost-effective way of getting around (Dublin’s not a small city but the centre is very walkable) and then pick the base that will give you the most hassle-free trip.

Individual mobility is becoming ever more popular and there are plenty of options in Dublin if you want to go that route (and I don’t just mean walking!). You can go the staple route of renting a car in Dublin, but there are also pick-up-and-go bikes available for hire across the city for a small fee. And of course, you can always just jump in a taxi (Uber is available in Dublin).

4. Getting from the airport to the city

As someone who has taken many different airport-to-city transfers in the past, I know a poor operation when I see one! But Dublin’s Airlink Express is definitely in the upper-tier. Frequent, comfortable and largely hassle-free, it’ll whisk you from the airport to the city centre in around 30 minutes (depending on traffic).

If you don’t want the hassle of working out how to pay for public transportation in Dublin, then the DoDublin card might be the way to go. For €45.00, you’ll have 72 hours of access to Dublin’s bus, Luas, DART and train networks, as well as 48 hours on the Hop on Hop off sightseeing tour. Not bad is it!

Similar to DoDublin but with more options on the time you’d like to spend on transport. The Leap Card is a pre-paid smart card for reduced-cost travel on all Dublin transit and it works out well for locals and visitors. It costs €10 for 24 hours, €19.50 for 3 days and they’re available at some 400 shops in and around the city.

An overview of public transportation in Dublin

So, there are numerous types of public transportation in Dublin, depending on how you like to travel and how much you want to spend.

Below, you’ll find everything from the various buses in Dublin and the Luas, to the DART and how to get around Dublin if you’re only here for a few days. 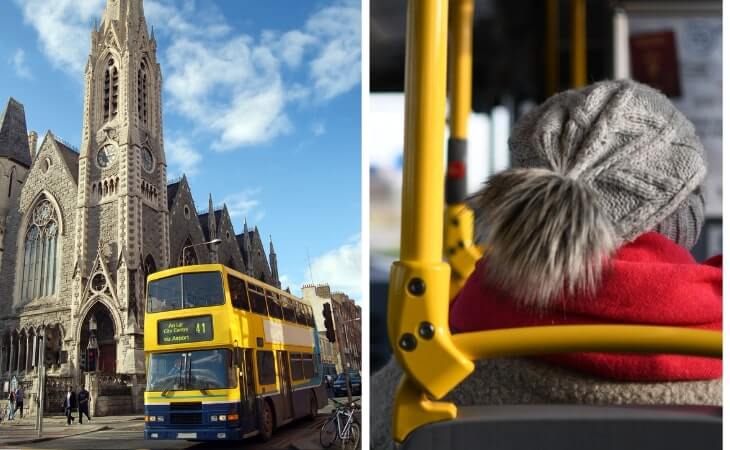 Easily recognisible from their bright yellow exteriors, you’ll see the buses in Dublin all over the city and are one of the most convenient and practical ways to get around. They run from the city centre (a ton leave from O’Connell Street) to the outer suburbs and vice versa and usually run from 06:00 in the morning (10:00 on Sundays) until around 23:30 in the evening.

How to get the bus

Look out on the street for the traditional bus stop markers resembling big blue or green lollipops. There will be a schedule posted on revolving notice boards at bus stops, while to tell where a bus is going, check the destination street and bus number displayed above its front window.

Prices for the buses in Dublin are generally calculated on a system based on distance travelled (Daytime journeys that take place entirely within the designated “City Centre Zone” cost €0.50, for example). The further you go the more you pay. Also, make sure you have the exact fare in coins or are carrying a Leap Card (definitely recommend this for visitors). 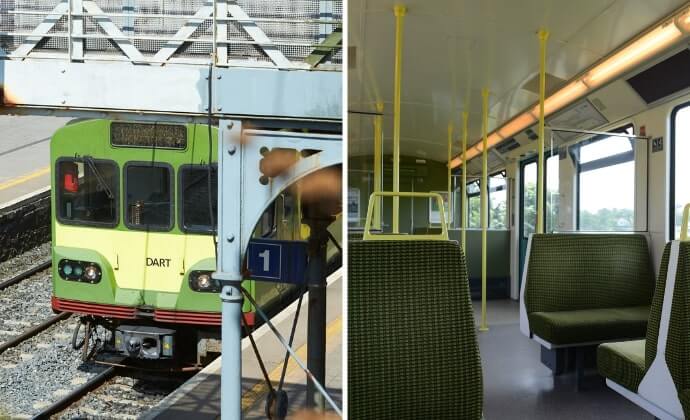 The Dublin Area Rapid Transit (or DART) is an electrified commuter rail railway network first opened back in 1984 and serving 31 stations, stretching from Malahide in the north to Greystones down in County Wicklow.

How to get the DART

Check to see if the DART reaches your area and simply head to the station if it does and buy your ticket. The DART is a quicker way of getting about than the bus and serves some lovely coastal parts of Dublin. DART services operate every 10 minutes Monday to Saturday from around 6am to midnight and Sunday from 9:30am to 11pm

Prices are calculated depending on how far you travel but would roughly be between 3 and 4 euros and rarely more than 6. An adult 3-day ticket costs €28.50 and isn’t a bad idea if you’re spending a weekend at the seaside and hopping between city and coast. 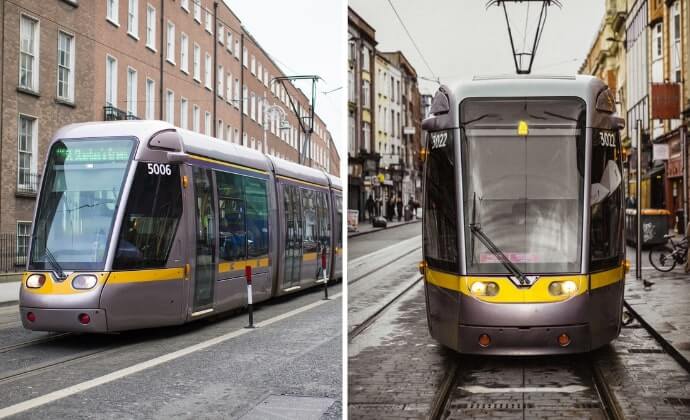 There are only two lines (Red and Green) of the sleek Luas tram system but they’re smooth, efficient and serve the city centre well (the Red Line is handy for visitors wanting to check out the Phoenix Park, for example).

How to get the LUAS

Since they run along already existing streets, the Luas trams are pretty easy to spot and there are ticket machines at each stop. They operate from 05:30 to 00:30 Monday to Friday, while on Saturdays they begin slightly later at 06:30 and on Sundays operate between 07:00 and 23:30. Look out for the glass stops with ticket machines alongside.

Like the other methods of getting around Dublin, ticket prices depend on the length of your journey and how many city zones you cross. A single peak travel journey within the city center (zone 1) costs €1.54, rising to €2.50 for rides to zones 5 through 8. Purchase your ticket in advance using coins, paper money, or card. Leap Cards are also accepted on the Luas. 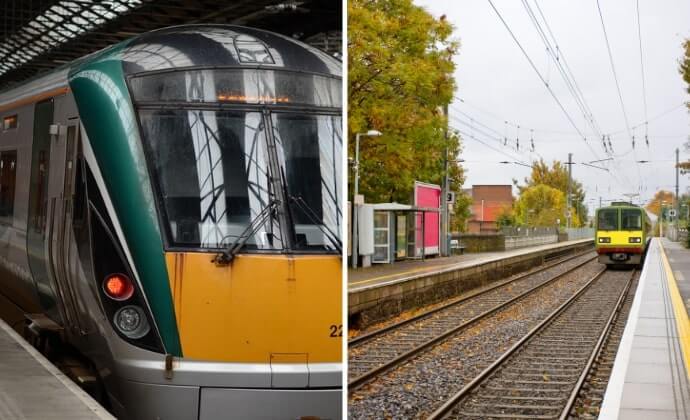 To be honest, you probably won’t get a whole lot of use out of the national rail network (Iarnród Éireann) if you just want to zip around the city but it’s worth knowing about if you’re staying in Ireland for a longer period of time and plan to travel long distances.

How to get Irish Rail

If you do plan on travelling across Ireland from Dublin then there are two main stations you’ll need. Dublin Connolly is the busiest and has regular links with Belfast and the north of Ireland, while Heuston serves the south, southwest and west of Ireland.

Ticket prices vary wildly due to the distances involved (Dublin to Belfast is around €20 for example). But if you do get a local train across Dublin then you shouldn’t have to pay much more than €6. Again, you can buy tickets at the station, but you can also get them online in advance (highly recommended).

FAQs about getting around Dublin

We’ve had a lot of questions over the years asking about everything from ‘how to get around Dublin without a car?’ to ‘What’s the cheapest public transportation in Dublin?’.

What is the best way to get around Dublin?

This will be dependent on 1, where you’re starting from and 2, where you’re going. Personally, I’d take Irish Rail and the DART over Dublin Bus any day.

How do you get around Dublin Ireland without a car?

Getting around Dublin without a car is easy. There are heaps of buses in Dublin, lots of train and DART stations and there’s also the Luas, too.

What public transportation in Dublin is the most comfortable?

I’d argue that (once they’re not packed!) the trains and DART are the most comfortable method of getting around Dublin.