Although it’s one of the more unusual tourist attractions in Belfast, the Harland and Wolff Cranes are renowned engineering feats that have become icons of the city.

The yellow, gantry cranes dominate the skyline of the dock and have become a symbol of the city’s ship building history.

The cranes, which were constructed by Krupp, a German engineering firm, are a stone’s throw from both Titanic Belfast and the SS Nomadic.

Below, you’ll find info on everything from the history of the Harland and Wolff shipyard to the story behind the now-iconic cranes.

Some quick need-to-knows about the Harland and Wolff Cranes 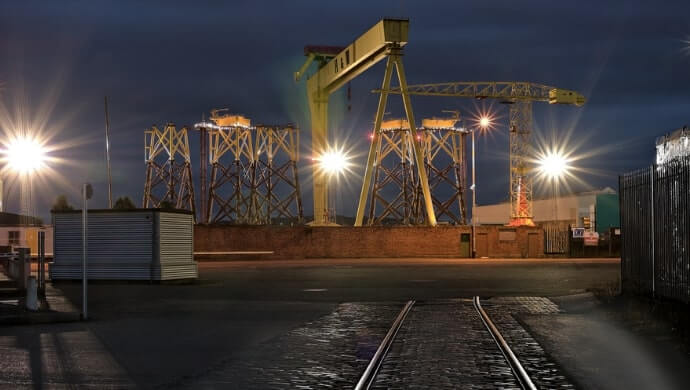 Although a visit to see the Harland and Wolff cranes from afar is fairly straightforward, there are a few need-to-knows that’ll make your visit that bit more enjoyable.

2. Part of the iconic ship makers

The cranes are known locally as Samson and Goliath and were part of the Harland and Wolff shipbuilding company. The iconic ship makers were the biggest employer in Belfast in the early 1900s and constructed over 1700 vessels, including the Titanic.

3. Where to get a good view of them

While they dominate the city skyline from almost anywhere in Belfast, if you walk around to the Titanic Hotel you will get one of the better views. From there, you can see them in their full glory as the hotel is just across from the shipyard.

The history of Harland and Wolff

Harland and Wolff was founded in 1861 by Edward James Harland and Gustav Wilhelm Wolff. Harland had previously purchased a small shipyard on Queen’s Island in Belfast with Wolff as his assistant.

The company became a success quickly through small changes in innovation including replacing wooden decks with iron ones and increasing ship capacity by giving the hulls a flatter bottom.

Even after Harland died in 1895, the company continued to grow. It built Olympic, Titanic and Britannic between 1909 and 1914 after having worked with White Star Line since the company’s foundation.

During and after the wars

During the first and second world war, Harland and Wolff shifted to building cruisers and aircraft carriers and naval ships. The workforce peaked in this time to around 35, 000 people, making it the biggest employer in Belfast City.

In the post-war years, ship building went into decline in the UK and Europe. However, in the 1960s a huge modernisation project was undertaken and included the construction of the iconic Krupp Goliath cranes, now known as Samson and Goliath.

With mounting competition from overseas, Harland and Wolff broadened their capabilities to focus less on shipbuilding and more on other engineering and infrastructure projects. They constructed a series of bridges in Ireland and Britain, commercial tidal stream turbines and continued ship repairs and maintenance.

In 2019, Harland and Wolff officially entered formal administration after no buyers were willing to purchase the company. The original shipyard was bought in 2019 by InfraStrata, a London-based energy firm. 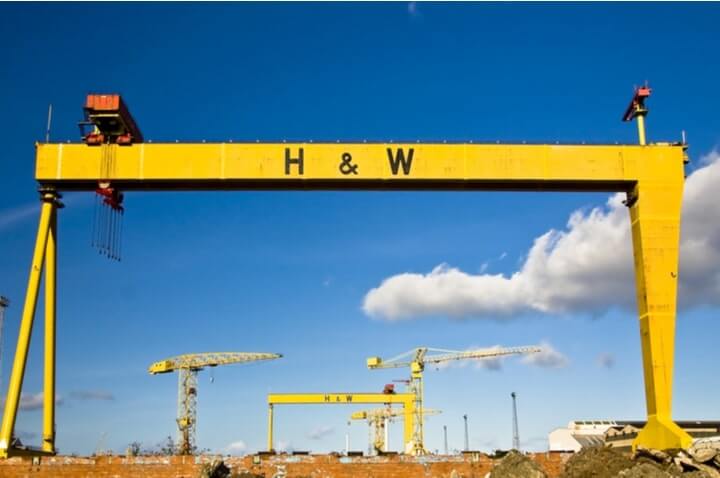 The two iconic cranes of the Harland and Wolff shipyard are known locally as Samson and Goliath and they’re visible from many parts of the city.

The now-iconic cranes tend to grace the covers of many guidebooks and posters of Belfast, as their yellow exteriors are immediately recognisible.

The cranes were constructed by Krupp, a German engineering firm, for Harland and Wolff. Goliath was completed in 1969 and stands 96 metres high, while Samson was constructed in 1974 and is 106 metres tall.

Each crane can lift loads of up to 840 tonnes to 70 metres above the ground, giving them one of the largest lifting capacities in the world. They were constructed in order to spearhead modernisation in the shipbuilding industry in Belfast.

Decline of shipbuilding and preservation of the cranes

While Harland and Wolff enjoyed a successful 20th century, shipbuilding has all but ceased in Belfast at present mostly due to overseas competition. However, the cranes have not been demolished and instead, have been scheduled as historic monuments.

While they can’t be listed as buildings, they are recognised as being a symbol of the city’s past and of historic interest. The cranes are retained as part of the dock, adjacent to the Titanic Quarter and remain a dominant part of the city’s skyline.

Things to do near the Harland and Wolff Cranes

One of the beauties of a visit to see Samson and Goliath from afar is that they’re a short spin away from many of the best places to visit in Belfast.

Below, you’ll find a handful of things to see and do a stone’s throw from the Harland and Wolff shipyard (plus places to eat and where to grab a post-adventure pint!). 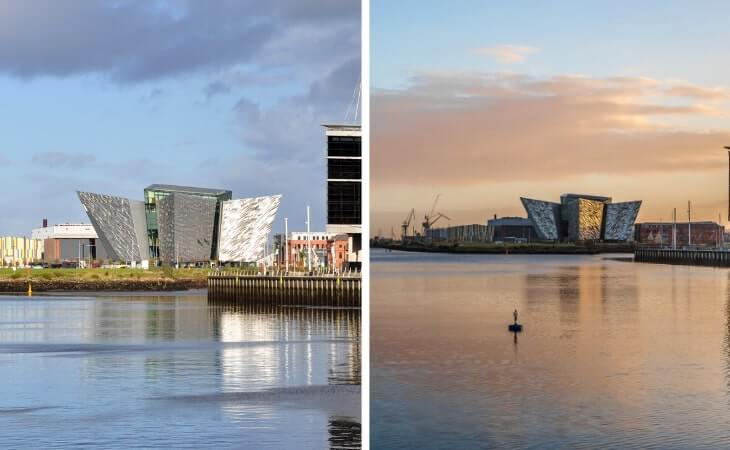 Just across from the cranes, Titanic Belfast is one of the most popular attractions in the city. This world class museum and experience will take you through the history of the Titanic from construction to her maiden voyage. It’s a must see during your time in Belfast and has exhibitions and activities for the whole family to enjoy. 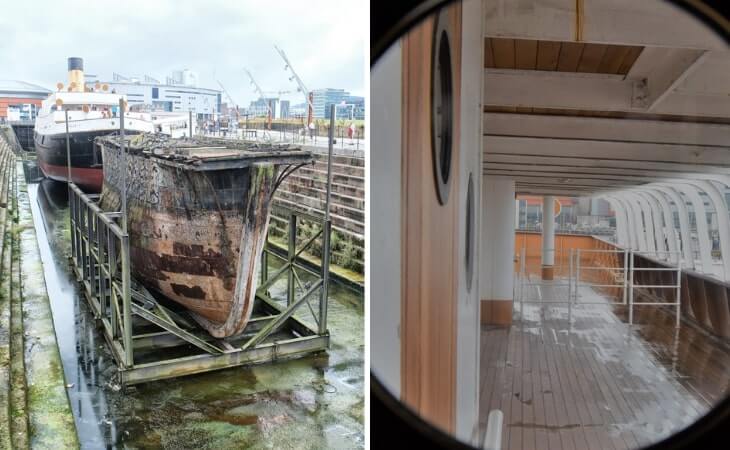 Another part of the Titanic Quarter, you’ll find SS Nomadic, a maritime museum aboard the historic ship built to carry passengers to the Titanic. It’s the perfect way to continue learning more about the city’s shipbuilding history with plenty of information and displays preserved from the 1900s. 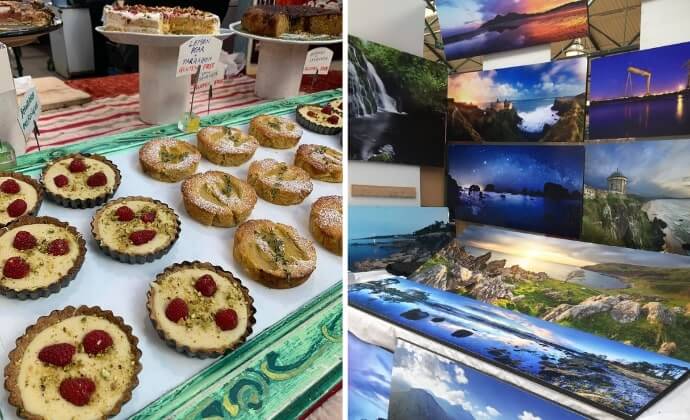 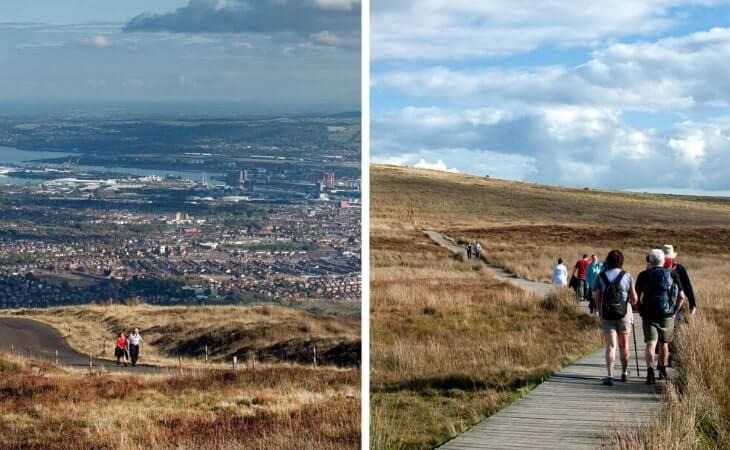 There are so many things to do and see in Belfast. However, the Titanic Quarter is a bit of a distance outside of the centre, so you might want to jump into a taxi and head off somewhere else. You’ve plenty of walks in Belfast and heaps of great tours, like the Black Cab Tours and Crumlin Road Gaol.

FAQs about the Harland and Wolff cranes in Belfast

We’ve had a lot of questions over the years asking about everything from did the Harland and Wolff cranes built the Titanic (they did) to how to see them.

What are the Harland and Wolff cranes called?

The H&W cranes are known locally as Samson and Goliath.

Can you visit Samson and Goliath in Belfast?

The best way to see the Samson and Goliath cranes is from afar. They’re visible from many places in the city, including from over near the Titanic building.

When were the Harland and Wolff cranes built?

Samson and Goliath were completed at different times: Goliath was completed in 1969 while Samson was constructed in 1974.

How are the cranes powered?

I worked in the engine works Queens island, in 1969 watched the drydock construction of the supertanker, and the first heavy life crane erected. The biggest natural drydock in the world. It was an interesting period in the company. Unfortunately I left due to the start of the troubles. 1972 moved with my wife and children to NSW Sydney.