The Medieval Museum in Waterford (aka the Waterford Museum of Treasures) is a building bursting at the seams with historical artifacts.

Magnificent exhibits at the Waterford Museum of Treasures include the Great Charter Roll of Waterford, ceremonial weapons and sumptuous cloth-of-gold vestments.

In the guide below, you’ll find info on everything from the tour and what to see when you visit (spoiler: there’s lots!).

Some quick need-to-knows before visiting the Medieval Museum

Although a visit to the Medieval Museum in Waterford is fairly straightforward, there are a few need-to-knows that’ll make your visit that bit more enjoyable.

The Medieval Museum is located on Cathedral Square in the historic Viking Triangle, Waterford. It is between the Blackfriar’s Abbey Ruins and Christ Church Cathedral.

The nearest car park is 2 minutes’ walk away at Bolton Street Public Car Park. If you’re lucky you might find metered street parking on the Quays, the Mall or near the City Square Shopping Centre, 400m away.

The museum is open daily except at Christmas and around New Year. Opening times are:

The last admission is 4.20pm. Adult admission is 10€ and children under 12 visit free. Admission includes a guided tour (note: times and prices may change).

Guided tours take you back in time to the preserved underground medieval chambers of the 13th century Choristers’ Hall and the 15th century Mayor’s Wine Vault. Admire the Great Charter Roll of Waterford, the Sword of Edward IV, the Luker Chalice and many more beautiful relics in this outstanding Medieval Museum.

A visit to the Waterford Museum of Treasures begins from the outside, as you admire the curved mellow stone building and the giant sculpture on the gable.

This gives you a sense of what’s to come. One of the most popular attractions in Waterford, this award-winning attraction houses royal exhibits and city treasures.

Join a 45-minute guided tour to get the most from your visit to Waterford’s Medieval Museum. There are several audiovisual presentations providing more in-depth information about the city’s medieval past.

Guided tours head down a spiral staircase to the ancient stone walls and vaulted roofs of two significant medieval chambers. Learn about the uses of the Chorister’s Hall and the Mayor’s Wine Vault, spanning over 600 years of Waterford history.

Unique and priceless exhibits include the only complete set of cloth-of-gold vestments in Europe. The Great Charter of Waterford is part of Ireland’s largest display of medieval charters. End your visit in the Gift Shop browsing a range of tasteful souvenirs.

What you’ll find inside the Medieval Museum 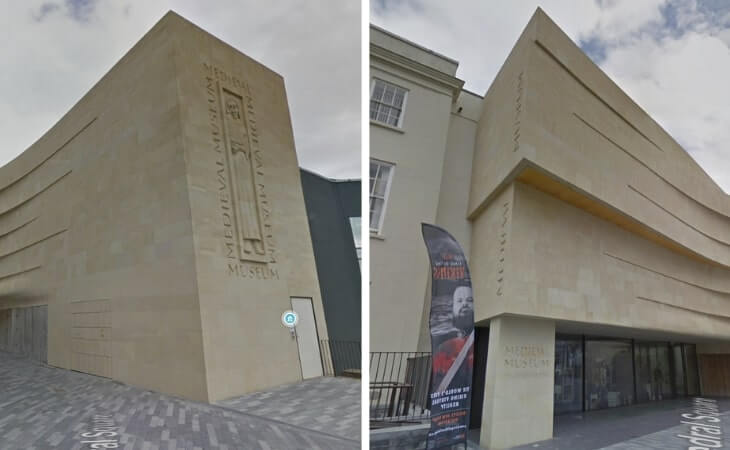 Similar to nearby Reginald’s Tower, one of the beauties of a visit to the Waterford Museum of Treasures is the sheer volume of things to see.

1. The Relic of the True Cross

Medieval churches had prized relics, particularly relating to the life of Jesus and the early Christian saints. This double-armed wooden relic is composed of five pieces of cedar, said to be from the cross of Jesus’ crucifixion. It is enclosed in a silver casing with a Latin inscription which identifies the source. It dates back to around 1110AD. It was probably acquired by Pope Paschal II after the capture of Palestine during the First Crusade.

The tour begins by descending a spiral staircase to the preserved medieval chamber of the Choristers’ Hall. This lower chamber was built around 1270 during the time of Stephen de Fulbourne, Bishop of Waterford. The upper floors of the Choristers’ Hall no longer exist but were used as a residence for the Dean of the Cathedral. The stone comes from Dundry, England and was probably imported as ship’s ballast. A glass panel in the floor reveals the foundations of an earlier Deanery building.

In the Middle Ages, Waterford imported so much wine it was named “Wine capital of Ireland”. With its thick walls and vaulted ceiling, the Mayor’s Wine Vault was built by Peter Rice beneath his house in 1440. He was a wealthy wine merchant and mayor of Waterford. In 1468, James Rice gave the house (no longer in existence) and wine vault to Dean John Collyn to accommodate the priests of the new Chantry Chapel.

4. The Great Charter Roll of Waterford

Admire the Great Parchment Manuscript known as the Great Charter Roll of Waterford. This illustrated manuscript preserves the records of the city from 1356 to 1649. It was hand-penned onto 233 sheets of calf-hide vellum. This re-oganising of the city archives was ordered by James Rice, Mayor of Waterford. The last entry was when the city fell to Cromwell in 1649. The shameful entry was later erased, leaving the page defaced.

This elaborate Civic Sword was given to the Mayor of Waterford by Edward IV in 1462, along with two maces. They were carried on processions ahead of the mayor to symbolize his authority. Edward IV was familiar with Waterford as it was from the city that his father, Richard Duke of York, plotted to overthrow Henry VI. After Henry’s demise, Edward IV ascended the English throne in 1461.

This hat is the only surviving clothing belonging to Henry VIII. Made of red velvet, the hat is embroidered with a Tudor rose on top and daisies around the brim. The hat and a magnificent Bearing Sword were given to the Mayor of Waterford, William Wyse, by Henry VIII in 1536. It was a sign of his appreciation for the city’s loyalty during the 1534 rebellion.

The Waterford city administration dates back to the 12th century. Panels in the Mayors’ Treasury highlight the names of 650 mayors of Waterford along with the centrepiece – the historic Mayor’s Chair. It was made from American oak taken from the original bridge across the River Suir. Learn about some of the city’s mayoral figureheads and admire the collection of gifts they received over the centuries.

Things to do near the Waterford Museum of Treasures

One of the beauties of the Medieval Museum in Waterford is that it’s a short walk away from many of the best places to visit in Waterford.

Below, you’ll find a handful of things to see and do a stone’s throw from the Waterford Museum of Treasures (plus places to eat and where to grab a post-adventure pint!). 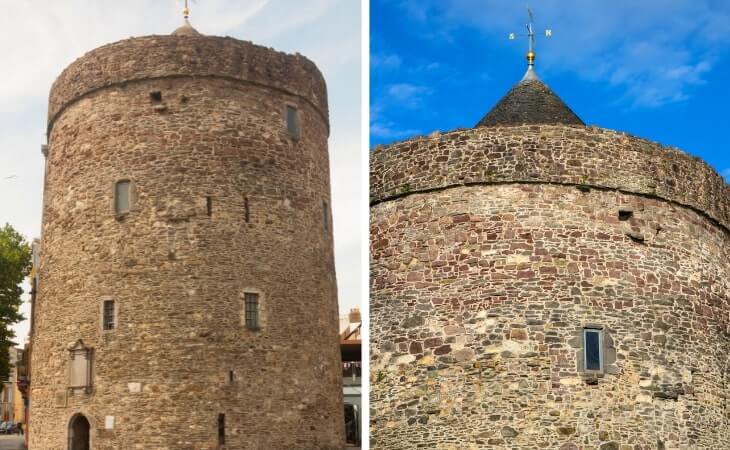 Neighbouring Reginald’s Tower is another historic landmark in Waterford’s Viking Triangle. This medieval round tower is the oldest civic building in the city and the only monument in Ireland to keep its Viking name. Standing 16m high, the tower is now a Viking museum crammed with interesting exhibits. 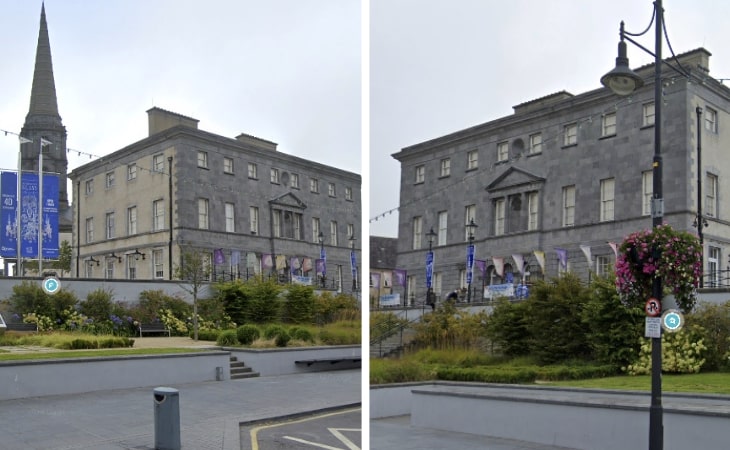 Rounding off the trio of museums in Waterford’s Viking Triangle, the Bishop’s Palace is an 18th century townhouse filled with treasures. From portraits and artworks to shoes, coins, swords and the oldest piece of Waterford Crystal, it’s all here! 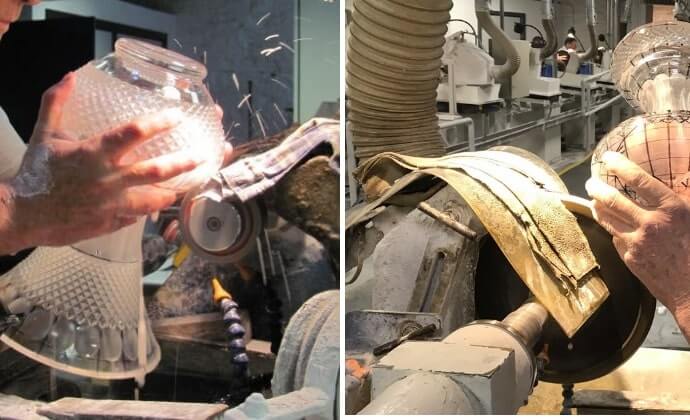 World-famous Waterford Crystal has been producing fine glass and crystal in the city since 1783. Visit the House of Waterford Visitor Centre, take a guided tour and see each step of the process. Talented artisans showcase their skills from molten glass-blowing to the final etching and carving of this high quality product. 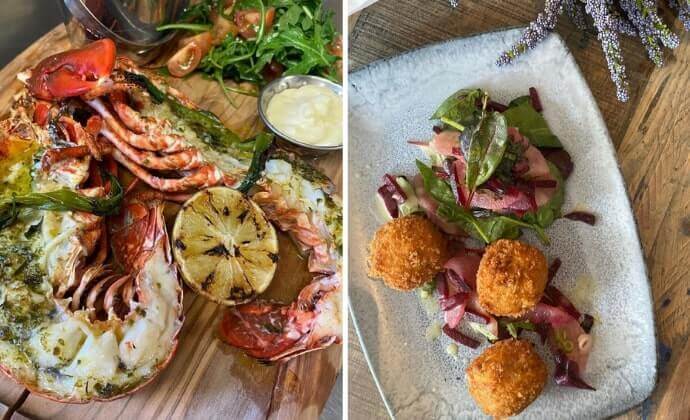 There’s an endless number of great restaurants in Waterford, as you’ll discover here. There’s also some excellent (and very old) pubs in Waterford to drop into after a long day of exploring.

FAQs about the Waterford Museum of Treasures

We’ve had a lot of questions over the years asking about everything from when the Medieval Museum is open to whether or not it’s worth a visit.

FAQs about the Waterford Museum of Treasures

We’ve had a lot of questions over the years asking about everything from whether the Medieval Museum in Waterford is worth a visit to what there is to see.

Is the Medieval Museum in Waterford really worth visiting?

Yes! The Medieval Museum in Waterford is a fantastic spot to visit if you have any interest in history. It’s brilliant put together and it’s home to plenty of things to discover.

What is there to see at the Waterford Museum of Treasures?

You’ll find everything from The Relic of the True Cross and The Great Charter Roll of Waterford to The Choristers’ Hall and The Sword of Edward IV at the Medieval Museum in Waterford.

How much is it into the Medieval Museum in Waterford?

Adult admission is €10 and children under 12 visit free. Admission includes a guided tour. Note: prices may change, so check in advance.