Scrabo Tower is one of Northern Ireland’s best known landmarks.

Built in the mid-19th century, the tower is a prime example of a ‘folly’, i.e. a building built primarily for decoration, but suggesting some other grander purpose through its appearance.

Below, you’ll find info on everything from its history and parking to the Scrabo Hill Walk. Dive on in!

Some quick need-to-knows about Scrabo Tower 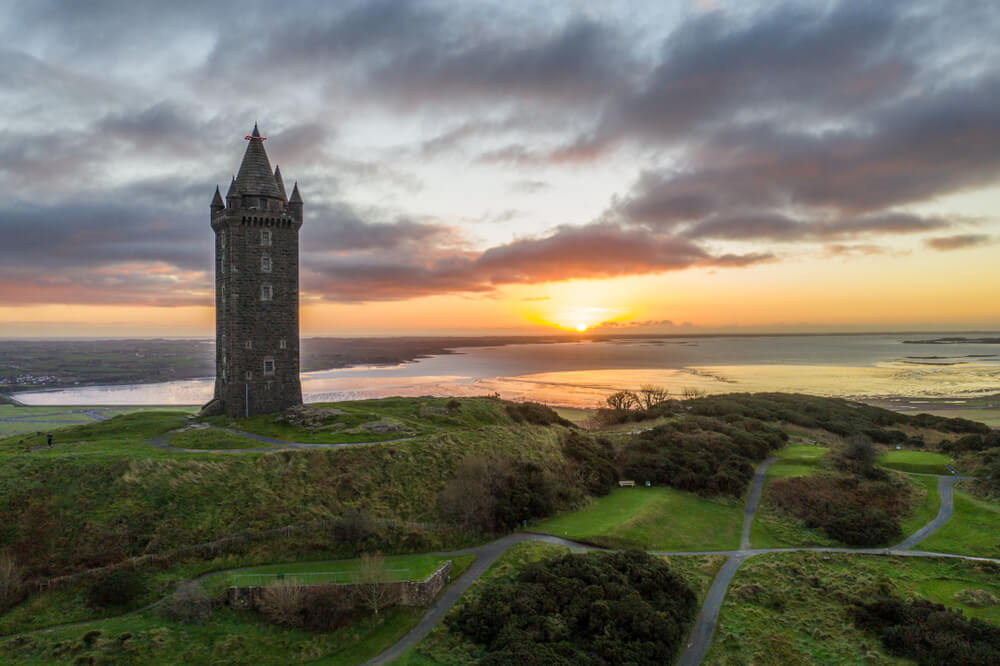 Although a visit to Scrabo Hill is fairly straightforward, there are a few need-to-knows that’ll make your visit that bit more enjoyable.

Parking is on Scrabo Road, Newtonards, BT23 4 NW. From the car park, it takes about five to ten minutes to get to the top of the hill and the tower, depending on your level of fitness.

Scrabo Country Park is centred at the top of Scrabo Hill near to Newtownards and from there you are rewarded with incredible views over Strangford Lough and the surrounding countryside. There are plenty of paths through the beech woodlands of Killynether Wood allowing visitors many opportunities to enjoy the quiet and peaceful countryside.

Although Scrabo Tower is not too far from the car park, it is a very steep climb that anyone who has limited mobility should bear in mind before setting out to visit. It is still worth the trip, as the surrounding area is beautiful.

Although the tower does open for tours, at present it is closed though tours should recommence soon. If you can get inside, it’s well worth seeing as the architecture is rather splendid and inside you can see an exhibition and a short video that details the tower’s somewhat tumultuous history.

The history of Scrabo Tower

Scrabo Tower’s original name was the Londonderry Monument or Memorial in reference to the Marquess of Londonderry who owned much of the ground around the hill.

It commemorates the 3rd Marquess of Londonderry, who was born Charles William Stewart in 1788 and who fought in the Napoleonic Wars.

His second wife was Frances Anne Vane, a rich heiress and their marriage contract obliged him to change his name to hers.

He became Marquess in 1822 and when he died in 1854, his oldest son, Frederick Stewart, the 4th Marquess and his widow decided to build him a monument.

A committee was formed to raise funds for the monument, with the local gentry and the late marquess’s friends donating most of the money, along with contributions from tenants.

The firm Lanyon & Lynn submitted the Scottish baronial style design that was chosen for the monument, the Scottish style thought appropriate for a Stewart, given that the Stewarts ruled Scotland when peel towers (which the style represented) were erected.

The foundation stone was laid on 27 February 1857 by Sir Robert Bateson and blessed by the Church of Ireland bishop of the diocese.

Work ceased in 1859 after the cost had risen and the contractor was ruined, and the interior left unfinished.

The tower and the grounds on which it stands were acquired by the state in the 1960s and the Department of Environment spent £20,000 on the tower in 1992, repairing windows, repointing the masonry, adding lightning protection and fitting in a wooden floor between the second and third floor.

Things to do at Scrabo Tower 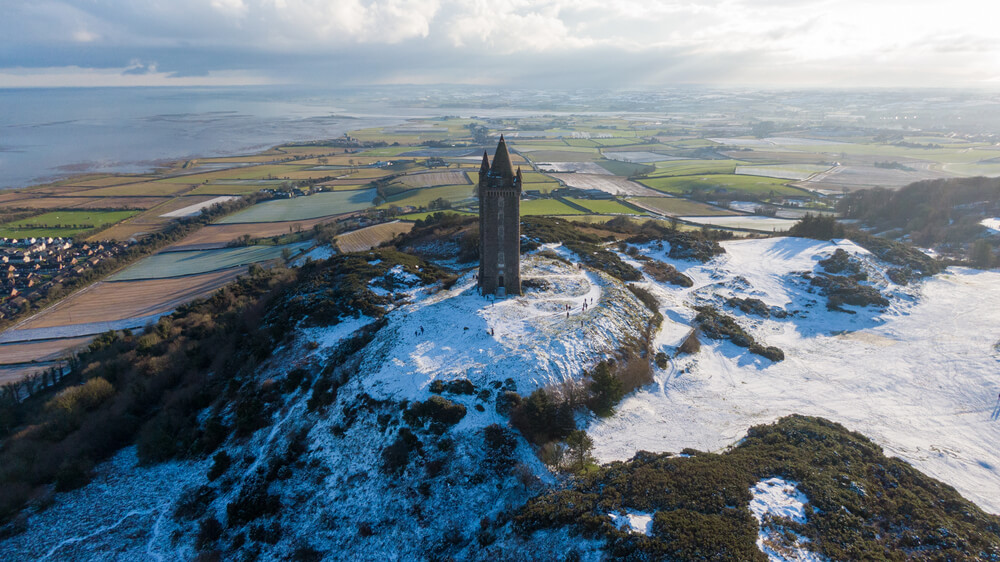 One of the reasons that a visit to Scrabo Tower is one of the best day trips from Belfast is thanks to the views. Here’s what to expect:

As Scrabo Tower is in a park, the Scrabo Hill Walk is well worth doing while you are there. The walk takes in the summit of Scrabo Hill and the Scrabo Tower, and you will be rewarded with views over Strangford Lough and North Down—some of the finest in the country.

From the summit, the walk then descends to the disused sandstone quarries that provided building stone since the Anglo-Norman times.

The old quarries are worth seeing as they have major geological importance and are designated an Area of Special Scientific Interest.

2. Soak up the views from the top

Scrabo Hill rises to 540 feet (160 m) above sea level, which is what makes it so popular with visitors. By climbing the 122 steps, the visitor will encounter views over Strangford Lough and its islands, as well as Newtownards and Comber.

On clear days, lucky tourists will be able to see Helen’s Tower in the north (another Scottish baronial style tower that inspired the 4th Marquess), the Copeland Islands and lighthouse and Mull of Kintyre, Ailsa Craig and the Rhin’s of Galloway in Scotland, as well as the Isle of Man in the south east and the Mourne Mountains down south.

The tower’s style Scottish Baronial and it consists of a base, main body and a crenelated and turreted roof. The tower’s entrance door is on the north face and accessed by a short outer stair, with its door adorned with a commemorative plaque.

When work stopped in 1859 because of the huge rise in costs, only the ground floor and the first floor had floors and ceilings and all the space in the tower above the first floor’s ceiling right up into the cone of the main roof was left empty. The ground floor served as the caretaker’s apartment

Things to do near Scrabo Tower

One of the beauties of Scrabo Tower is that it’s a short spin away from many of the best things to do in Northern Ireland.

Below, you’ll find a handful of things to see and do a stone’s throw from Scrabo Hill (plus places to eat and where to grab a post-adventure pint!). 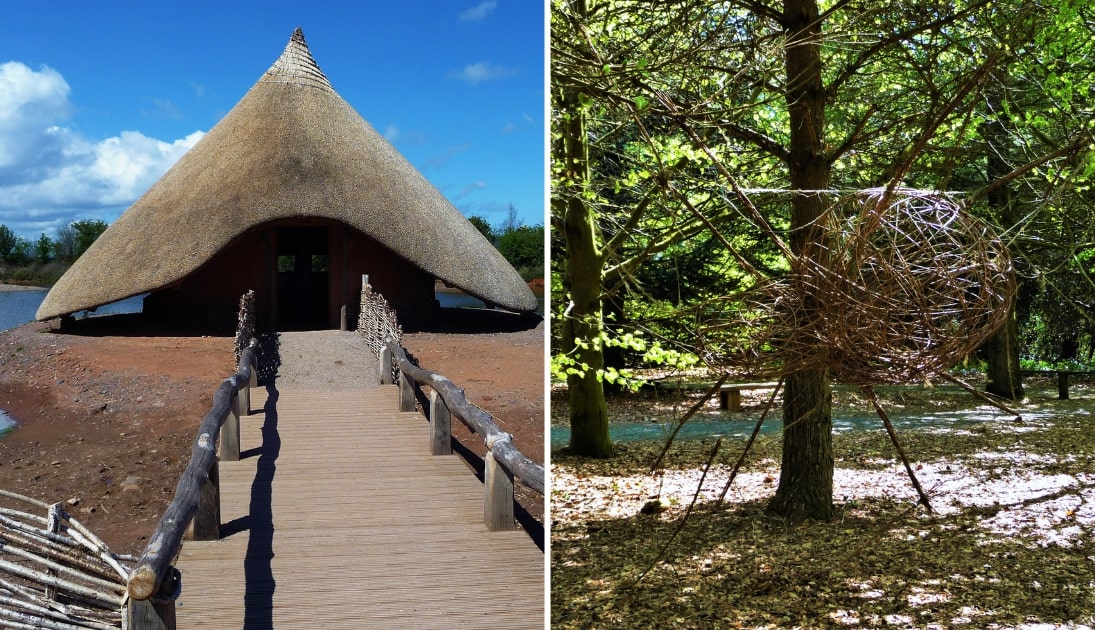 Castle Espie Wetland Centre is often described as the birthplace of modern conservation. Founded by Sir Peter Scott, son of the Antarctic explorer, Captain Scott, the centre was opened to the public in the 1940s to allow everyone to enjoy getting closer to nature. The Wetlands provide a unique ecosystem, home to a huge diversity of wildlife. 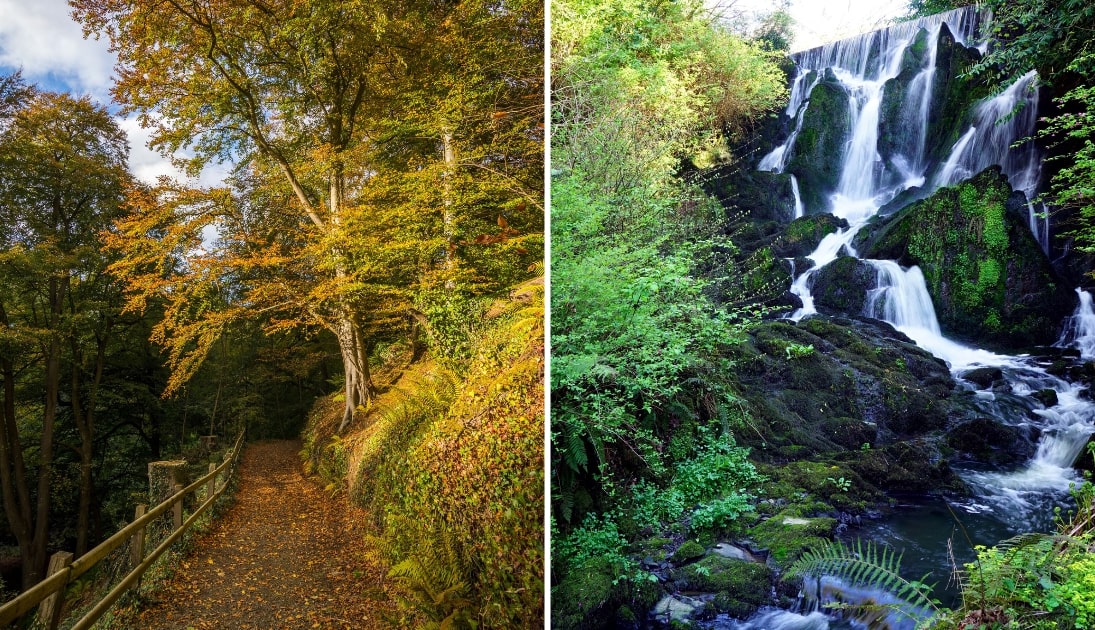 You will find Crawfordsburn Country Park on the coast between Bangor and Holywood with two excellent beaches, views across Belfast Lough, scenic walks and a stunning waterfall to see. There’s a woodland café that is open every day from 120am to 4pm, a natural play area, geology garden and many miles of designated walking routes. 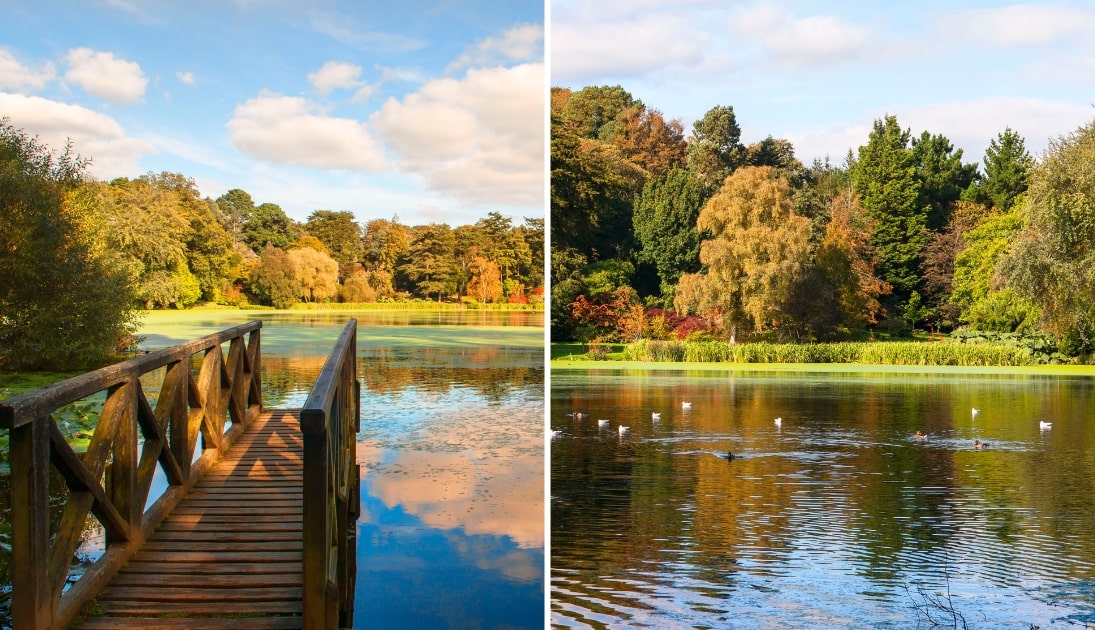 The National Trust-owned Mount Stewart is where you will find the home of the Londonderry family, a neo-classical house that attracts many visitors every year. The garden is unique, created by Edith, Lady Londonderry in the early 20tgh century building on the 18th and 19th century landscapes and has an unrivalled plant collection. 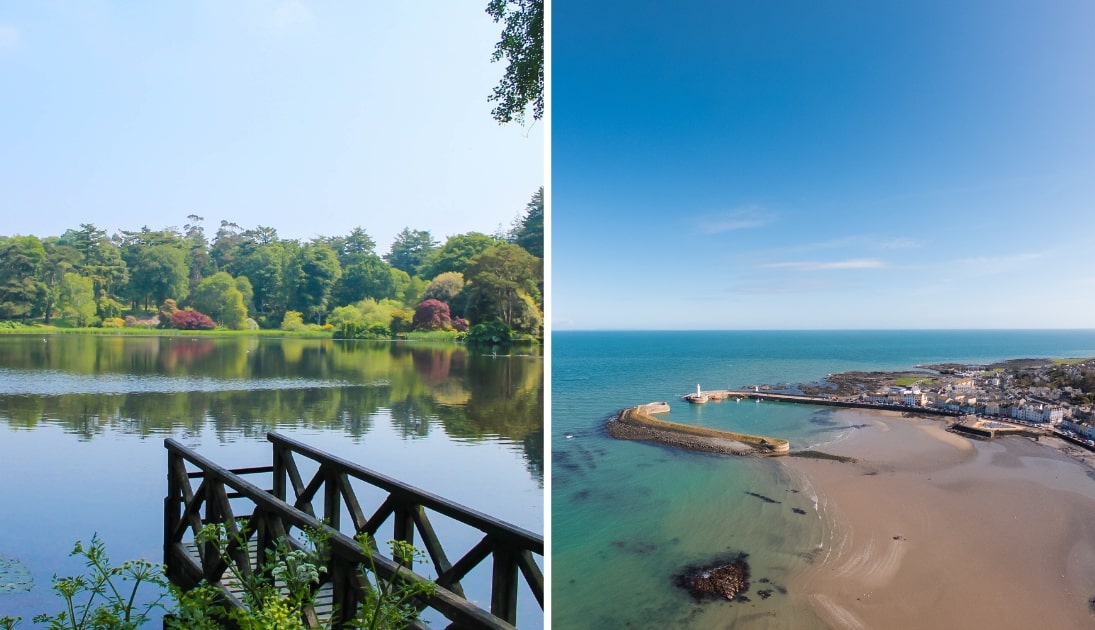 County Down’s Airds Peninsula is an area of outstanding natural beauty. Popular visitor attractions include the golf course that overlooks the Irish Sea, Ballywalter Park, the Exploris Aquarium with its seal sanctuary, the ruined Derry Churches for their glimpses into the Ancient East past and Kearney Village, a showpiece traditional fishing village restored by the National Trust.

We’ve had a lot of questions over the years asking about everything from ‘Is the walk tough?’ to ‘Can you go inside?’.

How long is Scrabo Tower walk?

If you’re walking from the car park, it’ll take you ten minutes max to reach the tower. There are longer trails in the area, if you fancy a tougher stroll.

What was Scrabo Tower used for?

The tower was built by Frederick Stewart in memory of his father, the 3rd Marquess of Londonderry, Charles William Stewart.