If you’re in search of the best nightclubs in Belfast, you’ve landed in the right place.

In recent years, Belfast has gained a reputation for its amazing nightlife. And, although we’d usually stick to the old-school trad pubs in Belfast, there’s a lively club scene on offer.

People flock to the city to take advantage of the buzzy clubs in Belfast, where you’ll find every eclectic dance/music choice you could possibly want.

Our favourite nightclubs in Belfast

The first section of this guide is packed with what we think are the best clubs in Belfast.

Below, you’ll find everywhere from The Gypsy Lounge and Ollie’s to the popular Laverys and much, much more. 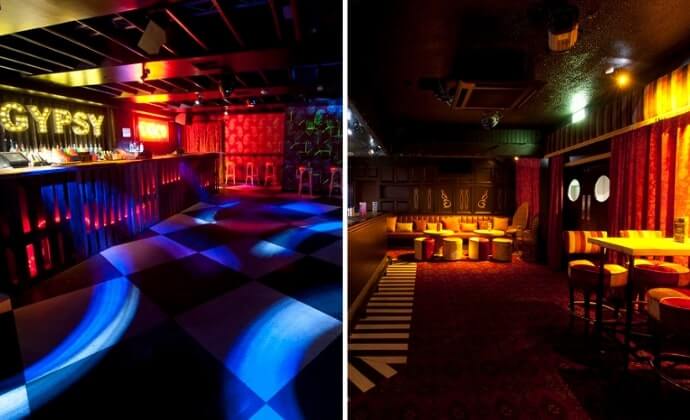 Photos via the Filthy Quarter

First up, is the Gypsy Lounge—a three-room club with an iconic design, a bright red patterned carpet, velvet cushions and stools and the wonderful black and white tiled floors that riffs on Romany culture.

Open every Tuesday, Thursday, Friday, Saturday and Sunday night from 9pm (although Sundays are 9.30pm), the Gypsy Lounge is host to some of Northern Irelands best DJs and it specialises in alternative dance tracks as well as the more better-known indie anthems. 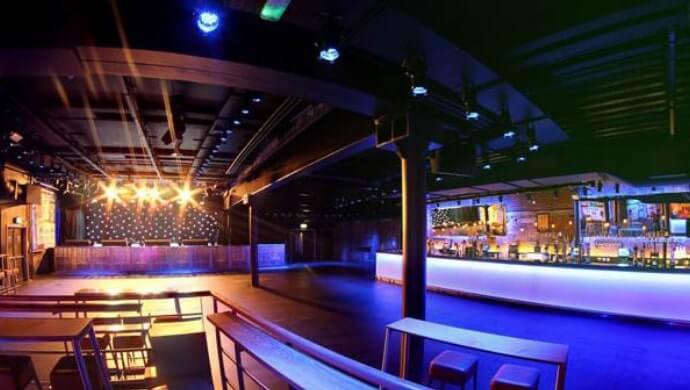 Limelight originally opened in 1987 at the height of the House mix frenzy. It’s a mid-sized live music and night club complex that consists of Limelight 1 and Limelight 2, and also has Katy’s Bar and an outdoor terrace called The Rock Garden.

The venue is well known for its associations with new bands on the scene and Irish talent. It also runs regular indie, rock and metal club nights, and is a firm favourite with students. You can get a bottle of Prosecco or bucket of beers on your birthday. 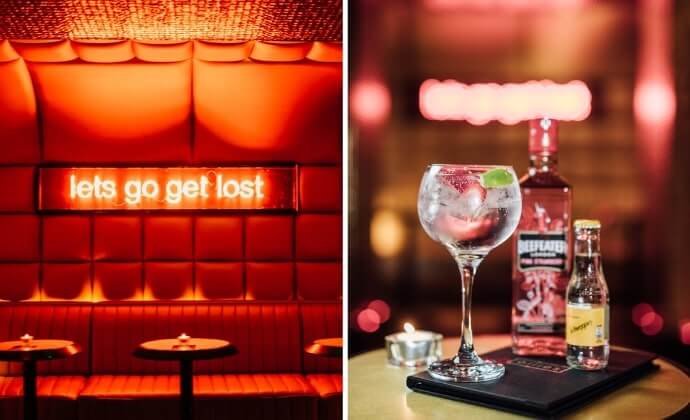 Ollie’s is known as Belfast’s most exclusive nightclub. Situated in the basement of the five-star Merchant Hotel, it is in what used to be a bank’s vaults and the venue is a study in opulence and luxury with its brick-vaulted ceilings and old granite walls.

Because it is in a bank vault, the capacity of the club is deceptive—although 500 people can fit in, the divided spaces and separate rooms make it feel much more intimate.

The club is open Fridays and Saturdays, and you can book a table or birthday package. This is regarded as one of the more exclusive nightclubs in Belfast for good reason.

Related read: Check out our guide to the best cocktail bars in Belfast (from 5 star locations to rooftop bars) 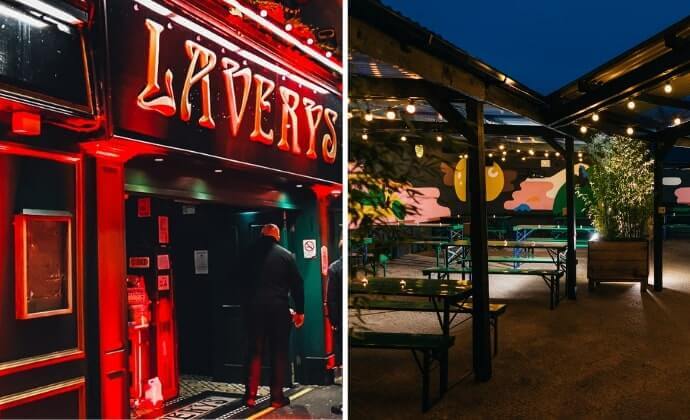 Laverys is more pub than night club but it has a big late-night spot that attracts the party hard crowd. The venue claims to be Belfast’s oldest family-owned pub and it combines lively entertainment with all the charm you might expect from a traditional Irish bar.

There are four bars in total, two roof gardens, a beer garden that’s on the street level and what is the largest pool room in Northern Ireland on the top floor.

You can get food in all the bars from noon until 10pm every day (Sundays start 12.30pm) and options for entertainment include comedy nights, live sport, live music and club nights. 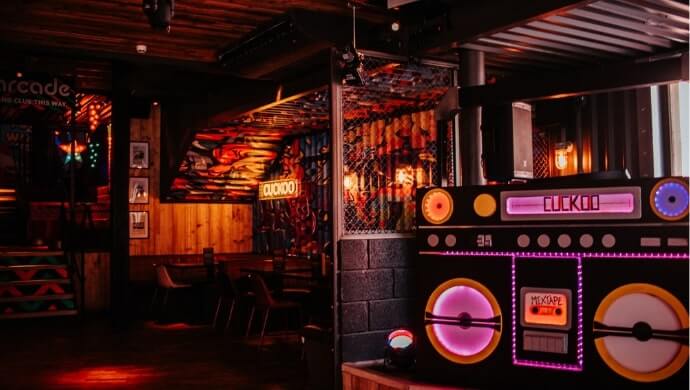 Cuckoo is a bar and nightclub situated on the Lisburn Road in the south of the city open seven nights a week, and which offers wonderful cocktails and dancing.

However, the venue is keen to emphasise that these aren’t the only things on offer, as you will also find a VR pod and a full arcade with classic games such as Mario Kart.

Through the week nights are for indie and metal tunes, while Saturdays belt out the best of House music. If you’re looking for nightclubs in Belfast for an evening out with friends, give this place a crack.

Other popular clubs in Belfast

The final section of our guide to the best clubs in Belfast is packed with several other popular late-night spots.

Below, you’ll find everything from The Art Department and Thompsons Garage to Alibi and much more. 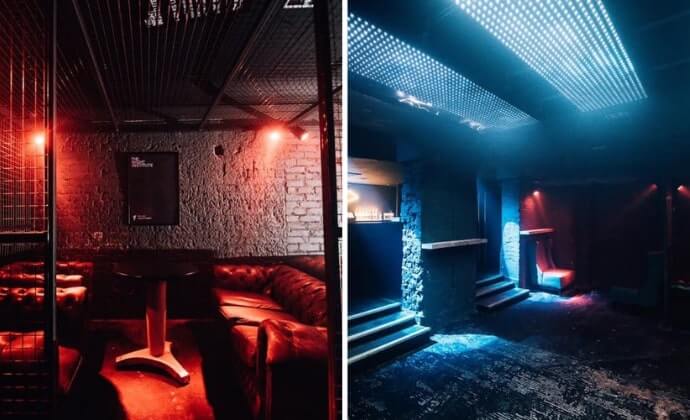 The Art Department near Belfast’s Cathedral Quarter be found on Donegall Street and is open every Friday and Saturday night.

It’s a popular place among the younger crowd thanks to its themed nights, which includes a special night to help distract students waiting for their A-level results.

The drink offers make it popular too, and it’s often tipped as one of the best clubs in Belfast for House and techno enthusiasts. 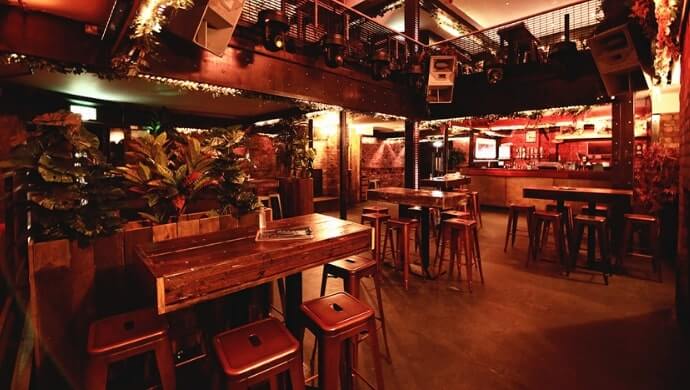 Thompsons Garage has been in the nightclub game for more than 25 years and is able to boast some amazing names that it has hosted over that time, including MK, Zane Lowe, Eats Everything, Red Axes, Gerd Janson and a whole load more.

It now operates as a cocktail bar and pizza restaurant where you can enjoy hand-crafted cocktails and dig into pizzas cooked the authentic way over a wood fire while behind you there is a soundtrack of laid-back beats. 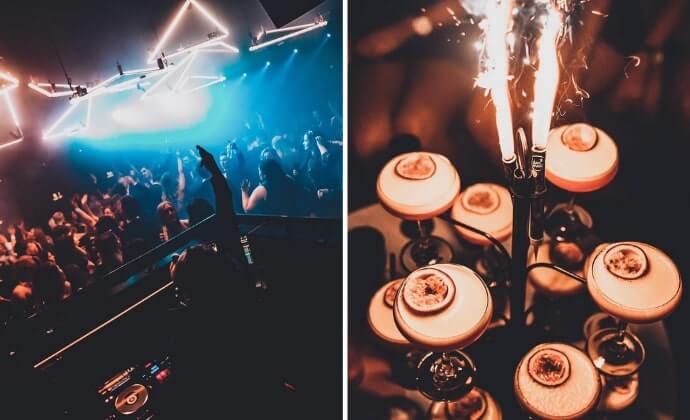 You’ll find Alibi on Bradbury Place, right in the heart of Belfast’s Queen’s Quarter. It is a three-floor venue with a terrace that is open every day.

The bar’s focus is on cocktail, gin and craft beers. There are more than 20 gins from all around the world to choose from and an intriguing cocktail menu.

They also boast to showcase the ‘very best in local talent and guest DJs from the Marbella and Ibiza scene’. 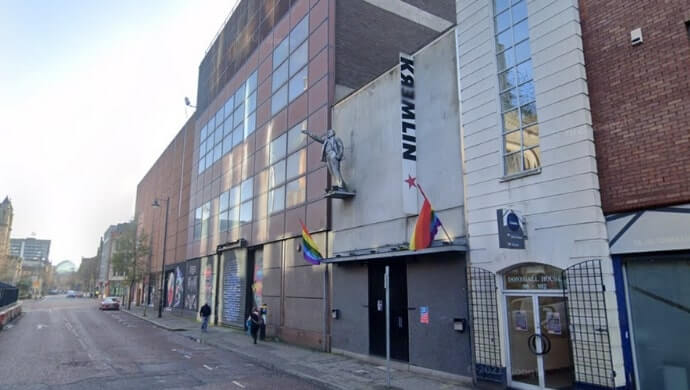 The Kremlin is Ireland’s biggest and most popular gay venue. It is known for its amazing music and there are several rooms and a seating area.

The Kremlin was established in 1999 and it’s Ireland’s largest LGBT nightclub, boasting everything from fab guest appearances to drag acts.

If you’re looking for the best clubs in Belfast to spend Pride, it’s worth having a nosey at Kremlin. 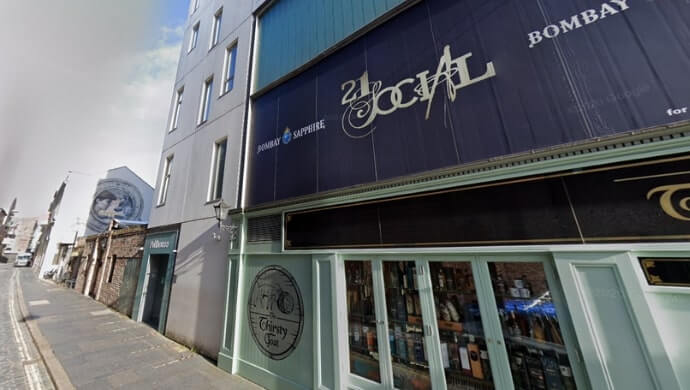 You will find 21 Social at the PortHouse Building on the corner of the Cathedral Quarter. The venue comprises three floors of what they describe as “exquisite libations, delectable eats and carefully curated sounds”.

If you have a special occasion coming up, the Cigarette Girl is a private bar for members and their guests, the name inspired by the chain-smokers who used to hang around American’s speakeasies.

The staff will provide you with everything you need to make your party one to remember—from the canapes to DJs and more. The club’s wine list was created by Robb Bros, a family-owned independent wine merchant in Northern Ireland and you can buy by the glass or bottle.

The best nightclubs in Belfast: Where have we missed?

I’ve no doubt that we’ve unintentionally left out some brilliant clubs in Belfast from the guide above.

FAQs about the best clubs in Belfast

We’ve had a lot of questions over the years asking about everything from the best clubs in Belfast for a Saturday night to which are the most exclusive.

What are the best nightclubs in Belfast?

In our opinion, the best clubs in Belfast are Laverys, Ollie’s, Limelight and The Gypsy Lounge.

What clubs in Belfast are the fanciest?

Ollie’s is arguably the fanciest of the many nightclubs in Belfast. It’s located in the 5-star Merchant Hotel, so you can expect a decent set-up.

Does Belfast have a good nightlife?

Yes! There’s a good mix of traditional Irish pubs and lively late night clubs in Belfast, with something to tickle most fancies.

no mention of what time they close