Approach every guide to the best series on Netflix Ireland with caution (including this one).

These guides tend to be an amalgamation of the writers own favourites… as is the case with this one.

In this guide, I’ll give you a quick insight into my favourites along with their Rotten Tomatoes score.

The best series on Netflix Ireland 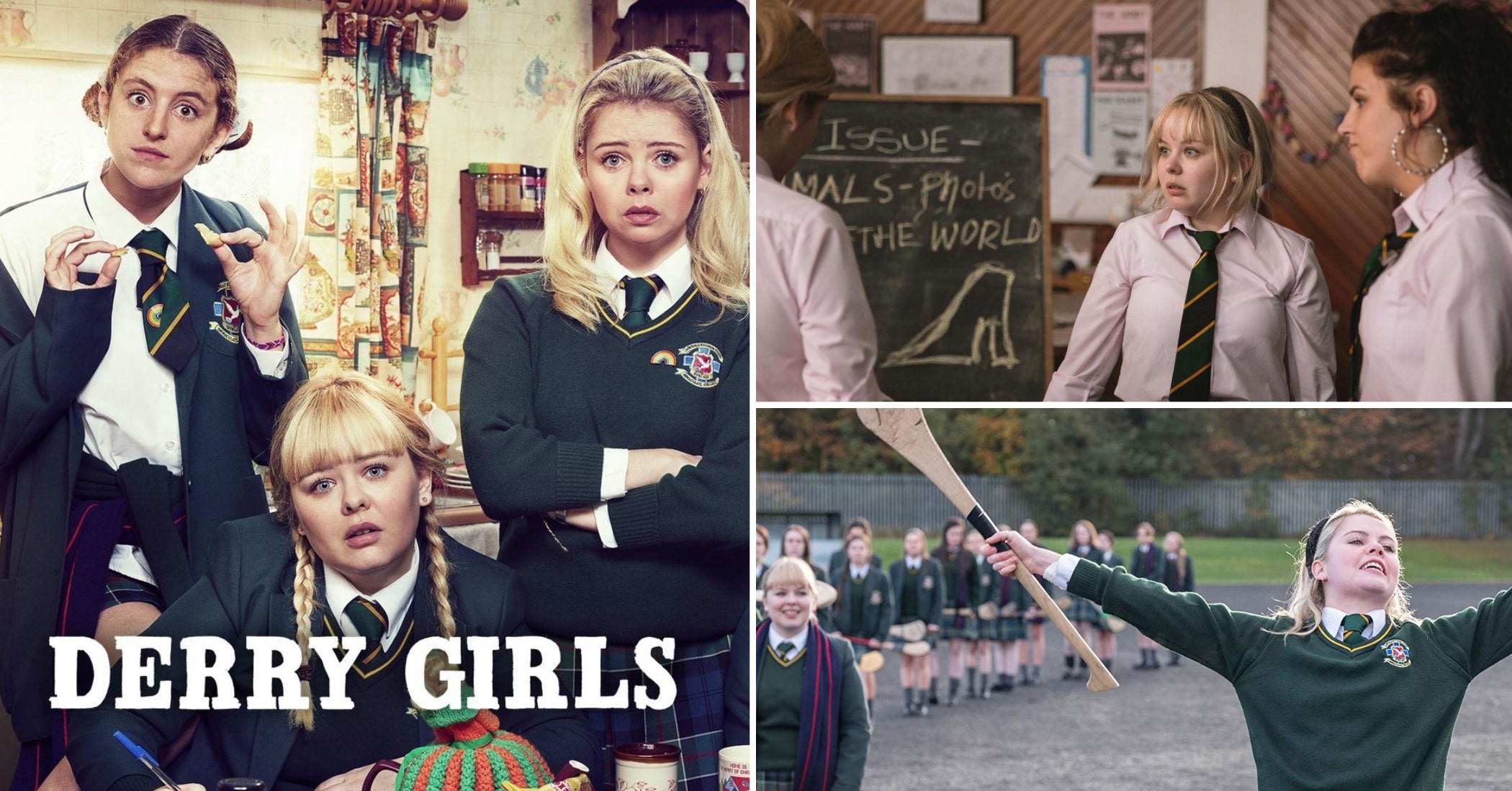 Below, you’ll find everything from dark dramas and comedies to a handful of Irish shows on Netflix, like Derry Girls.

There’s series that have been recently added (generally the ones at the top) along with some older shows that are well worth a watch.

If you saw the series ‘The Missing’ which aired back in 2014, you might remember the character Julien Baptiste – a French detective.

In ‘Baptiste’, we see Julien recovering from a bran tumour operation. The surgery has hit the detective’s confidence and he believes he no longer has the skills that he was once famous for.

However, the case of a missing child in Amsterdam propels him into the driving seat once again.

Related read: Check out our guide to the best movies on Netflix Ireland

The Spy is a mini series on Netflix Ireland starring Sacha Baron Cohen from Ali G fame. The plot follows the story of Israel’s top spy, Eli Cohen, and is based on real life events.

It’s set in the years leading up to the Six-Day War in 1967 with Isrrael and Syria and, although slow in the beginning, quickly picks up speed towards the end of episode one.

This is the last type of series on Netflix Ireland that I ever thought I’d find myself watching, having disliked the original show from back in the day.

However, I was pleasantly surprised and found myself glued to this one from the second or third episode.

The plot follows Wednesday Adams in a coming-of-age horror-mystery series after she’s sent to Nevermore Academy, a private institution for monstrous outcasts.

I really thought I’d hate this one but it was one of the best series on Netflix Ireland that I’ve watched as of late.

This show focuses on Pine Gap, a surveillance station near the town of Alice Springs in Australia.

The station is manned by Australian and American forces and involves plenty of twists and turns.

If you’re a fan of British crime dramas, this gritty series is well worth sitting down to. It follows the story of Raza who gets coaxed into becoming a police informer in London.

The story is dark and you can’t help but feel almost protective of Raza as he’s thrown into a clatter of perilous situations.

Related read: Check out our guide to the best Irish movies on Netflix

Marcella is a bit of a funny one. I loved the first season, wasn’t mad on the second and then loved the third (which happened to be set in Ireland).

The first series kicks-off by showing us Marcella, a retired member of the London Met who returns to work to help the police solve a number of unsolved murders.

Marcella is mentally unstable after a tragic event many years previous and her new team are less than keen to see her returning.

If you’re looking for a good series on Netflix Ireland that’s easy to watch, albeit dark, this is worth considering.

Ozark is widely regarded as one of the best series on Netflix Ireland for good reason.

Created by Bill Dubuque who’s known for the likes of The Accountant and The Judge, Ozar stars Jason Bateman as Marty Byrde, a financial planner who moves with his family to a summer resort in the Ozarks.

After a money-laundering scheme goes arseways with a Mexican cartel, Byrde must repay his debt… via a much bigger and much riskier operation.

This Israeli TV series has proven to be way more popular than expected since it was released in 2015. Although it’s subtitled, you quickly forget thanks to the constant twists and turns.

The show depicts the Israeli-Palestinian conflict from the perspective of a top Israeli agent who comes out of retirement after learning that an enemy from his past is still alive.

This is, in our opinion, hands-down the best series on Netflix Ireland at the minute. You just need to put up with the subtitles!

It’s been around a while now, but this is arguably one of the best series on Netflix Ireland that I’ve watched this autumn/winter.

The show is set in a fictional housing estate in East London where there’s tension between local gangs and those who are trying to live honest lives against the odds.

It focuses on two dealers who are threatened by a young and upcoming hustler. If you’re wondering what to watch on Netflix Ireland tonight that’ll hook you from the get-go, Top Boy is well worth considering.

Related read: Check out our guide to 33 of the best Irish movies of all time

The hilarious Derry Girls was created and written by Lisa McGee and is set in County Derry in Northern Ireland during the 1990s.

Derry Girls is one of the best-reviewed Irish series on Netflix. The Rotten Tomatoes review score at the time of writing is 99%.

The show follows Erin and her friends as they battle the highs and lows of being teenagers in Derry in the 1990s.

Unbelievable is one of the most overlooked shows on Netflix Ireland. It’s an American drama miniseries that stars Toni Collette, Merritt Wever, and Kaitlyn Dever.

The show revolves around a series of incidents in both Washington State and Colorado. When a teen reports a terrifying experience to police, two female detectives set off to uncover the truth.

Mindhunter is one of those series on Netflix Ireland that was recommended to me a hundred times, but I just couldn’t get into it.

That being said, the reviews are top-notch and I’ve enough friends that have raved about it to justify adding it to this guide.

FBI agents Ford and Tench attempt to understand what makes those that commit horrific acts tick. Over the course of the series, the duo pioneer the development of profiling.

The Fall is an outstanding psychological thriller based in Northern Ireland. It can get a bit intense, dark and gripping, but if that’s your kind of show then you need to start binging this tonight.

The show follows two people, a Northern Ireland native with a dark past and an even darker secret and a female detective who is assigned to catch him.

If you were a Breaking Bad fan, then this is essential watching. The show is a spin-off and prequel of the extremely popular crime drama series and is equally as good to watch.

The story follows ex-con artist Jimmy McGill who turns into a small-time attorney and adopts his alter ego of Saul Goodman, the morally challenged lawyer that everyone knows from Breaking Bad.

You’ve likely heard all of the buzz surrounding this award-winning American comedy show.

If you’re not already in love with the series, then start watching it tonight and stick it out past the first few episodes because it only gets better and better.

The story is about a couple who suddenly go bankrupt and are forced to move to a small town named Schitt’s Creek that they once bought as a joke.

If you’re wondering what to watch on Netflix Ireland tonight that’s easy-going, funny and inoffensive…ish – this is a good shout.

Power is a US crime drama that was created and produced by Courtney A. Kemp in collaboration with Curtis ’50 Cent’ Jackson.

Suits is an American legal drama series that ran for an incredible nine seasons. It has a well-known cast (yep, this is the one with Meghan Markle).

The story follows Mike Ross, a talented college dropout who is hired by one of New York’s best corporate lawyers, Harvey Specter.

They handle cases while simultaneously trying to keep Mike’s non-existent qualifications a secret.

This is another good series on Netflix Ireland that’s easy to get into and it delivers its fair share of laughs and tears.

Queen Sono is an African crime series that was created by Kagiso Lediga and premiered on Netflix in late February.

A South African spy named Queen Sono finds herself embroiled in a web of business and politics as she embarks on a mission to uncover the truth behind her mother’s passing.

The Stranger is a UK thriller series that’s based on a Harlan Coben novel.

The show premiered on Netflix on in January 2020 and it stars Richard Armitage, Siobhan Finneran, Jennifer Saunders and Hannah John-Kamen.

A series of unnerving secrets send Dad Adam Price on a quest to discover the truth about his wife and many of the people closest to him.

What good series on Netflix Ireland have we missed?

I’ve no doubt that we’ve unintentionally left out some great shows on Netflix Ireland from the guide above.

FAQs about what to watch on Netflix Ireland

We’ve had a lot of questions over the years asking about everything from ‘What are some Irish series on Netflix?’ to ‘Which are good to binge?’.

What are the best series on Netflix Ireland?

If you’re wondering what to watch on Netflix Ireland tonight, you won’t go wrong with the Spy, the Informer, Derry Girls or Fauda.

Are there any Irish series on Netflix?

At the moment, the only Irish shows on Netflix Ireland are Derry Girls and Can’t Cope, Won’t Cope.

Thanks for the recommendations on netflix. Also like the look of the Clare Island Lighthouse, some day soon!

thank you for this!