To be completely honest: I’d never heard about Bull Rock up until last year. I was sat in a cafe in a little town called Castletown-Bearhaven on the Beara Peninsula in Cork.

It was the tail-end of summer… and it was lashing down outside. The original plan for the day was to join an organised walking tour, but the guide rang that morning to say that it was cancelled.

When the chap in the cafe dropped down my coffee, we got to chatting about the area and what there was to do that was a little off the beaten path.

That’s when he mentioned what he described as ‘the most unusual of the many things to do in Cork‘. He was, of course, talking about Bull Rock.

Some quick need-to-knows about Bull Rock in Cork 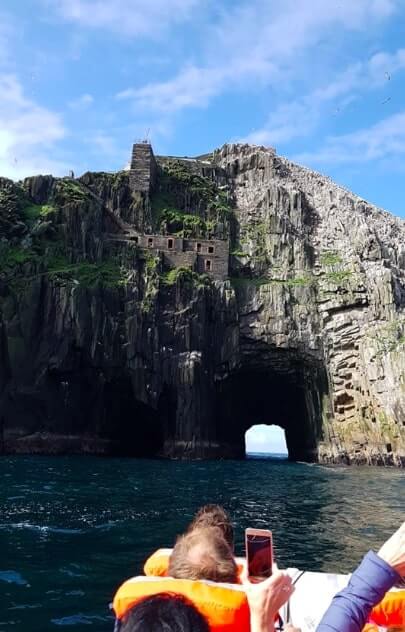 Although Bull Rock is one of the more off-the-beaten-path places to visit in West Cork, a visit here is pretty straightforward.

Below, you’ll find info on its location, how to get to Bull Rock and what there is to see and do nearby.

The chances are you’ll have heard of Cork’s Dursey Island (yep, it’s the one that’s accessible via a cable car).

Dursey is situated at the southwestern tip of the beautiful Beara Peninsula and it’s off the western point of Dursey that you’ll find Bull Rock Island.

There are two different Bull Rock tour providers: Dursey Boat Trips and Skellig Coast Discovery. You’ll find info on both below, from where they leave from to how much the tours cost.

Now, although you can’t get onto the island itself, you’ll get to have a spin around it on the different tours and you’ll also go through the hole in the centre. You’ll also see Bull Rock Lighthouse and discover the story behind the mysterious little island.

About Cork’s Bull Rock: ‘The Entrance to the Underworld’ 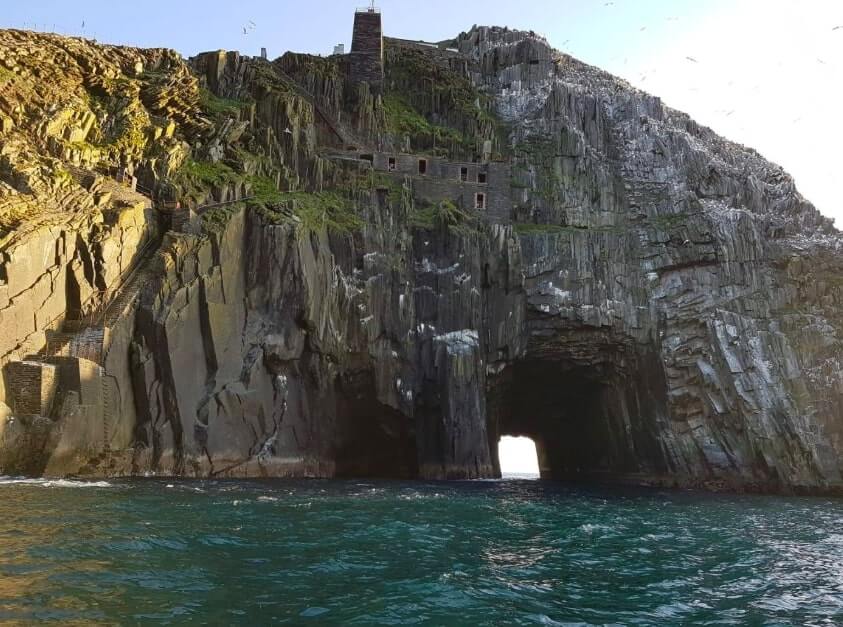 You’ll find Bull Rock Island off the southwestern tip of the beautiful Beara Peninsula in the even more beautiful region of West Cork.

Off the western point of Dursey lies three rocks (one of which looks like a set whipped straight from a Pirates of the Caribbean movie):

I’ve done a fair whack of travelling around Ireland over the past 10 years, but I’ve never seen anything like this place.

From the moment that I first laid eyes on Bull Rock, I thought that it looked like a deserted island that you’d find tucked away somewhere in the Indian Ocean.

The type of place that pirates would have used back in the day to stash their swag.

What you’ll see if you visit Bull Island in Cork 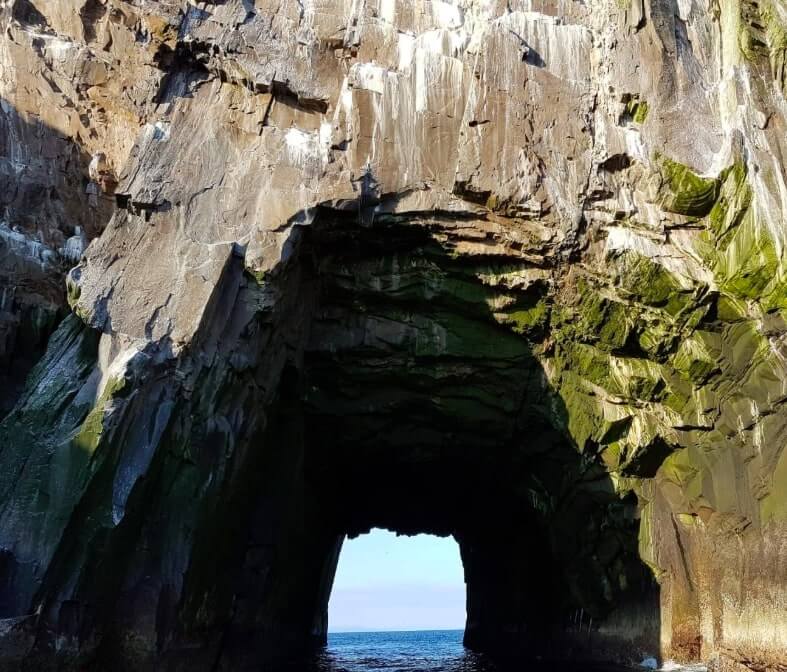 If you take one of the Bull Rock Tours (info on these in a minute), you’ll be treated to a very unique experience.

The island, which is roughly 93m high and 228m by 164m wide, is arguably one of the more overlooked places to visit on the Wild Atlantic Way, and a visit here packs a punch. Here’s what to expect.

The passageway through the rock

As you can see from the photos above and below, there’s a narrow passageway that cuts through the island.

You’ll see this referred to as ‘the Entrance to the Underworld’ on social media and on places like Reddit and Tripadvisor.

I’ve done a bit of digging, but I can’t find any more info on the background to the name. It’s not hard to see where the name came from, though – take a look at it up close and you’ll see why!

On the Bull Rock Tours, you’re take through the dark tunnel that runs beneath the island, right the way through to the other-side.

The original Bull Rock Lighthouse was built by Henry Grissell of Regent’s Canal Iron Works in London, after he won the contract in 1861.

He completed construction of the lighthouse in 1864. However, just 17 years later, in 1881, the Islands’ lighthouse was destroyed by a storm.

Bull Rock Lighthouse operated successfully for many years after. The, in early 1991, it was fully automated and the Keepers were withdrawn. 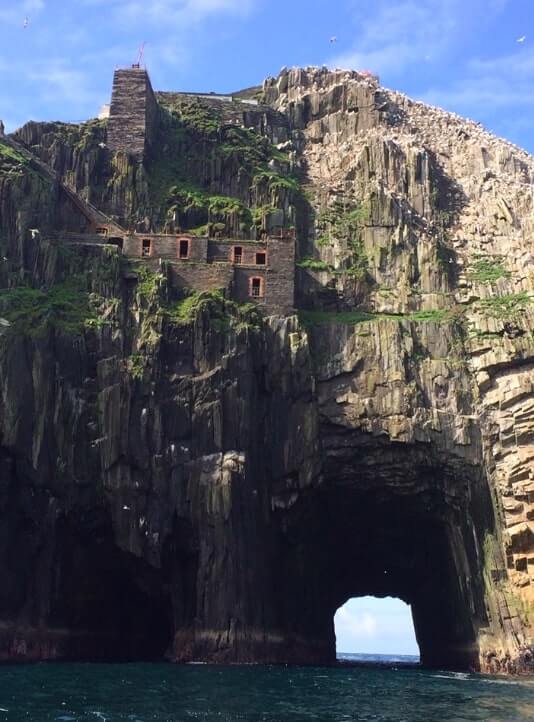 Since writing a guide to Bull Rock in Cork 4 years or so ago, we’ve received an awful lot of emails asking about tours of the island.

Below, you’ll find info on two Bull Rock Tours (one from Cork and another from Kerry). Note: prices, times and tours may change, so check with the provider in advance.

If you’re in/visiting Cork, Dursey Boat Trips are the go-to for getting to Bull Island. On the tour, you’ll spin around Dursey Island, Calf Rock, Elephant Rock and, of course, Bull Rock.

Here are some need-to-knows about this Bull Rock Tour (note: tours are weather dependent):

The second tour leaves from Caherdaniel in Kerry. On this tour, you’ll soak up the scenery around Derrynane, experience a good chunk of the glorious coastline that makes the Ring of Beara one of the best road trip routes in the world and take a spin around Bull Rock.

We’ve had a lot of questions over the years asking about everything from can you climb up to Bull Rock Lighthouse (you can’t) to what tours are available.

Can you visit Bull Rock Island in Cork?

So, while you can’t set foot on the island itself, you can take one of the Bull Rock boat tours from either Garnish Pier or Caherdaniel.

Where is Cork’s Bull Rock?

You’ll find Bull Rock just off Dursey Island, off the southwestern tip of the Beara Peninsula.

What Bull Rock tours are available?

There are two Bull Rock tours on offer: one leaves from Garnish Pier in Cork and the other leaves from Caherdaniel in Kerry. Info on both above!

How can I do the booking to visit the island on boat?

Why aren't visitors allowed to visit on the actual island of Bull Rock?

I’ve also taken trips to the Bull Rock with bantry Bay Charters . A good group of guys with solid boats.

Donn was éber Donn, a Spanish ruler who, along with his brother érimón sailed to ireland to seek revenge for the death of their uncle at the hands of An Tuatha Dé Danann. They angered the goddess Ériu who shipwrecked them. Donn was buried there