The Charlie Chaplin Waterville link is an interesting one.

And, while many people won’t associate Charlie Chaplin with a rural village along the Ring of Kerry, Waterville held a special place in the heart of the Chaplin family.

Below, you’ll discover his link to the town and where to spot the Charlie Chaplin statue.

Some quick need-to-knows about the Charlie Chaplin Waterville link 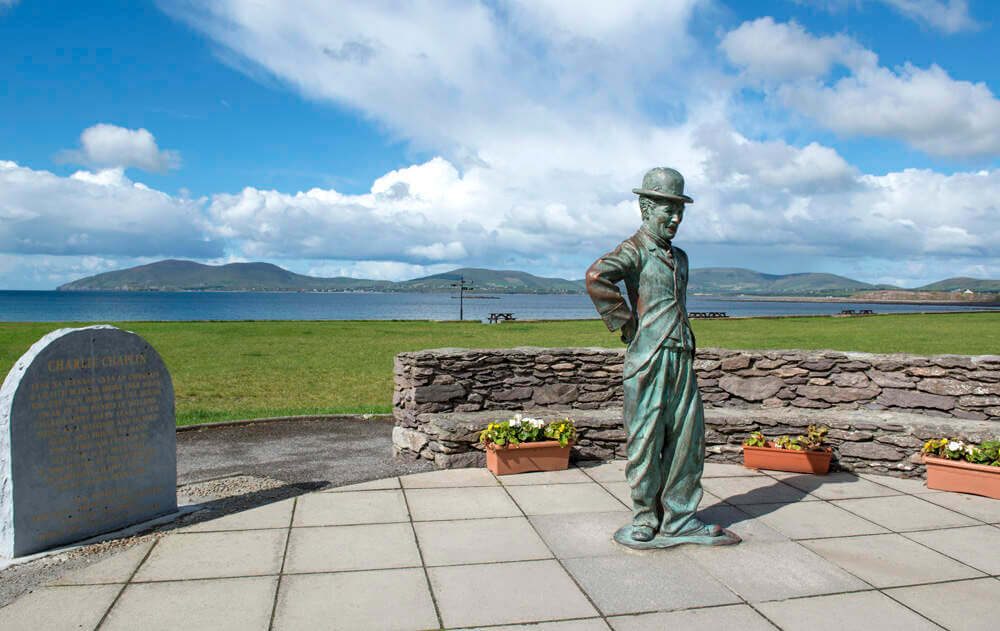 Although a visit to Charlie Chaplin statue is fairly straightforward, there are a few need-to-knows that’ll make your visit that bit more enjoyable.

Charlie Chaplin and his family first visited Waterville in 1959 after his friend Walt Disney recommended the area as a good place for fly fishing. The Chaplins were so enamoured with Waterville and the surrounding area that they came back year after year for over 10 years and developed close friendships with some of the locals.

This life sized Charlie Chaplin statue where he’s dressed as the Tramp, a character from some of his most famous movies, was sculpted by Alan Ryan Hall and unveiled in 1998. The statue is located just south of Sea Synergy along the waterfront where he looks out over the village he spent so much time in.

4. One of many things to do in Waterville

There’s plenty of things to do in Waterville, from track and trails to Waterville Beach, the many excellent restaurants in Waterville and more. The town makes a great base to explore from (see our Waterville accommodation guide for places to stay).

The story behind Charlie Chaplin’s link to Waterville

Charlie Chaplin is the best known silent film star and is a film industry icon to this day. The British actor rose to prominence in 1914 when he first started appearing in motion pictures.

By 1919, after he had devolved his beloved character of the Tramp, Chaplin was world-wide star with his own production company that would go on to make films that are still regarded as some of the best films ever made.

A recommendation from Walt Disney

Later in his life, after his career had experienced some ups and downs, Charlie Chaplin visited Ireland on the advice of his friend Walt Disney who recommended the area for its fly fishing.

Charlie Chaplin first arrived to Waterville in the summer of 1959. Even then, Waterville was a popular summer destination. However, he ran into some trouble.

No room at the inn

When he tried to secure rooms for his large family at the busy Butler Arms Hotel, Chaplin was told that the hotel was full due to the summer rush.

As a ‘Plan B’, Chaplin and his family decided to head to Kenmare to look for a place to stay. When Noel Huggard, the owner of the Butler Arms at the time, heard what had happen he jumped into his car and raced after the Chaplins.

A legend was born

Luckily, he managed to catch up with them and the Charlie Chaplin Waterville link was born. The Chaplin family were given their own private quarters and their love affair with Waterville began.

The family came back to Waterville every year after that for over 10 years, always staying in the Butler Arms Hotel.

How he explored undisturbed

Charlie Chaplin was one of the greatest actors of his generation, but during that time radio was more popular than television in west Kerry and Chaplin was able to enjoy Waterville as a simple family man on holiday with his wife and 8 children.

He enjoyed fishing on Lough Currane and developed close relationships with many of the locals including the Huggard family who still own and operate the Butler Arms Hotel to this day.

FAQs about the Charlie Chaplin statue 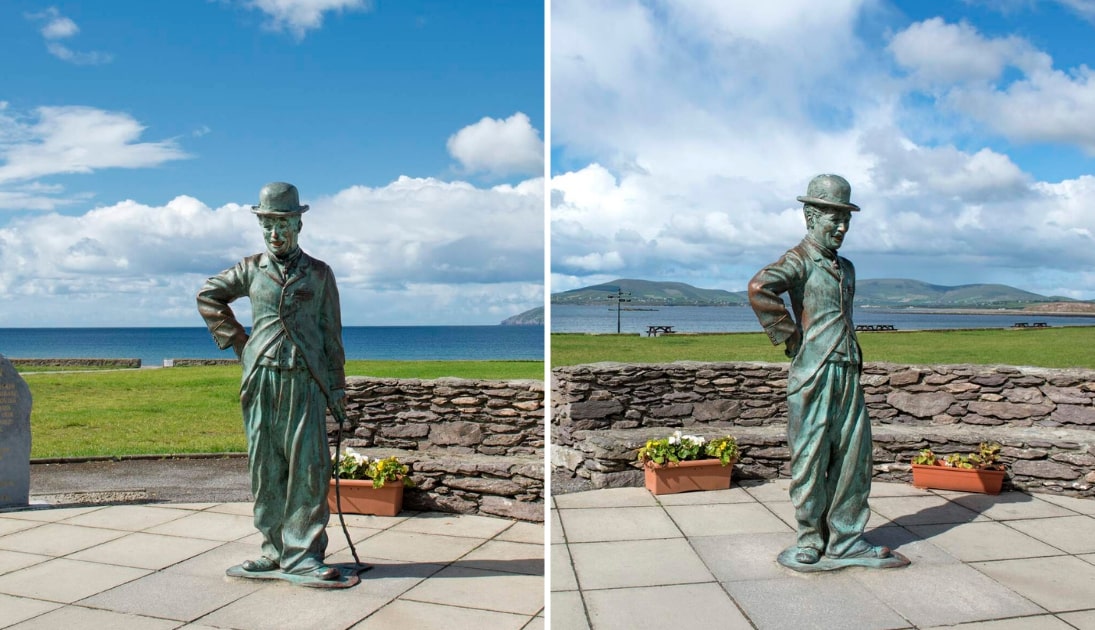 We’ve had a lot of questions over the years asking about everything from ‘Is the Charlie Chaplin Waterville link true?’ to ‘Where’s the statue?’.

When did Charlie Chaplin visit Waterville?

Charlie Chaplin and his family first visited Waterville in 1959 after his friend Walt Disney recommended the area as a good place for fly fishing.

Where did Chaplin live in Ireland?

Chaplin didn’t actually live in Ireland. He did, however, spend ten summers in the wonderful seaside town of Waterville.