The various pubs in Dun Laoghaire in Dublin cover the full spectrum, from historic family-run pubs to trendy spots that overlook the harbour.

The scenic little coastal village of Dun Laoghaire is well worth nipping out to. Firstly, you can spend a morning tackling the many things to do in Dun Laoghaire.

Secondly, you can follow this up with an afternoon spent in one of the many restaurants in Dun Laoghaire and thirdly … I’m sure you can see where I’m going with this!

Yes, an evening spent in McKenna’s, O’Loughlin’s or one of the many Dun Laoghaire pubs below is hard to beat. Scroll to discover our favourites.

Our favourite pubs in Dun Laoghaire 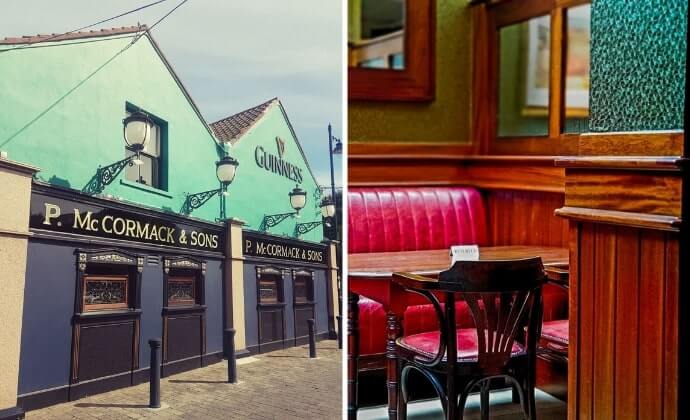 Photos via P. McCormack and Sons on FB

The first section of our guide to the best pubs in Dun Laoghaire tackles our favourite places to grab a pint in the town.

These are pubs and restaurants that we (one of the Irish Road Trip team) have munched away in at some point over the years. Dive on in! 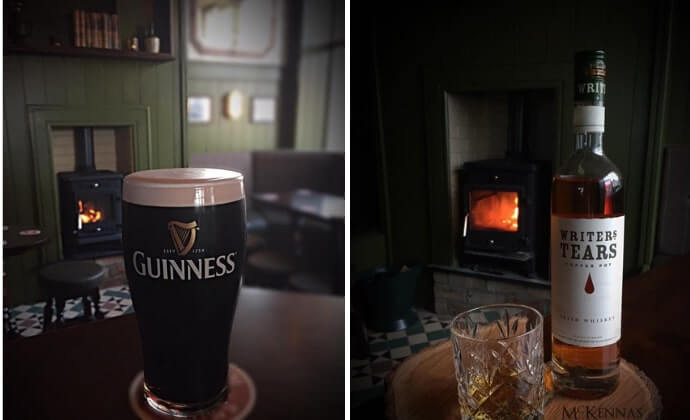 Photos via McKenna’s on FB

McKenna’s stands prominently on the corner of Wellington Street and George’s Place as it has for many years. This pub is a local haunt and is a hidden gem.

Step through the unassuming door and you’ll enter a pubs with a lovely homely feel. The darkwood bar is lined with stools and you’ll also fine a stove keeping the place toasty on cooler days.

If you fancy a great pit, a relaxed atmosphere and a bar where you can whittle away an evening in style, get into McKenna’s. This is, in our opinion, the best of the many Dun Laoghaire pubs. 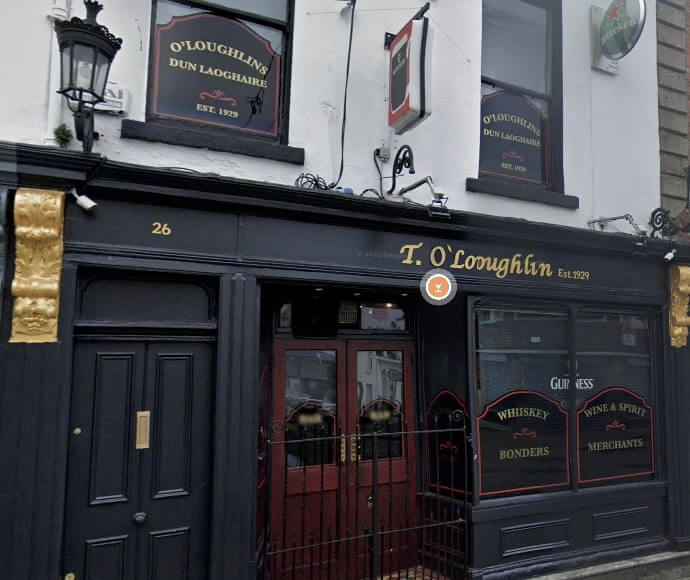 In business since 1929, O’Loughlin’s bar has pulled countless pints over the decades. Located in the heart of Dun Laoghaire, this family-run pub is still in the O’Loughlin family.

Known to locals as “Lockie’s” the black-fronted bar is on George’s Street Lower, and it’s a fine spot for a quiet pint and a chat.

Primarily a local’s hangout, it has had its share of fame. The walls are decorated with memorabilia from Lisa Stansfield, Ricky Ross of Deacon Blue and Neil Morrissey who have all enjoyed a pint or two here. 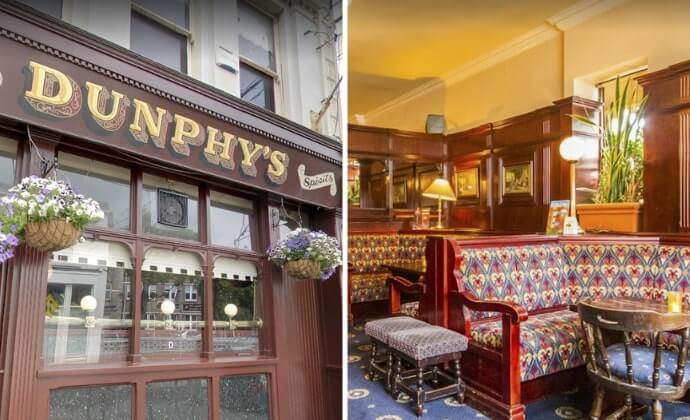 It’s said to have been here since the days of the famine and has been run by the same family since 1922.

This authentic, Victorian style bar has a load of comfy spots to perch yourself (see above!) for an evening, and they also do a bit of grub around lunchtime. 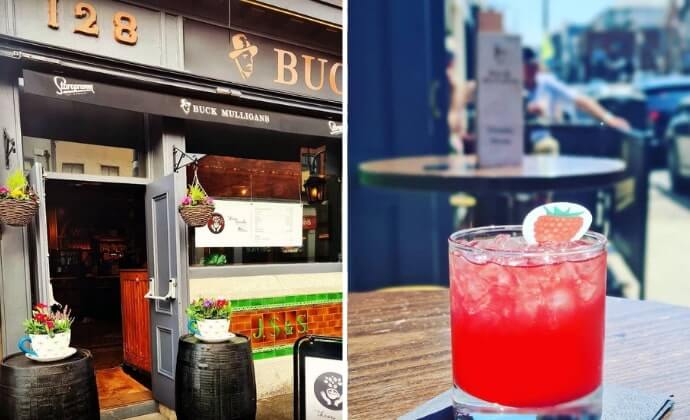 From craft ales to signature cocktails, Buck Mulligans is a lively spot for drinks and it’s just a stone’s throw from the West Pier on George’s Street Lower.

The big attraction here is there live music. Show up and most nights you’ll find some incredible artists playing and drumming up a nice bit of atmosphere.

Hungry? They have an excellent Bar Bites menu too. Buck Mulligan’s is open every evening from 4pm, and from noon on weekends.

Photos via P. McCormack and Sons on FB

If you’re looking for great food in a friendly local pub atmosphere, head to McCormack’s on Mountbatten Lower. Unlike most town pubs, McCormack’s has a tree-lined car park and a conservatory with a leafy garden outlook.

As well as a fully stocked bar, it has a range of soft drinks and organic teas. Family-operated since 1960, this traditional pub is a winner of the National Bar Catering Competition. 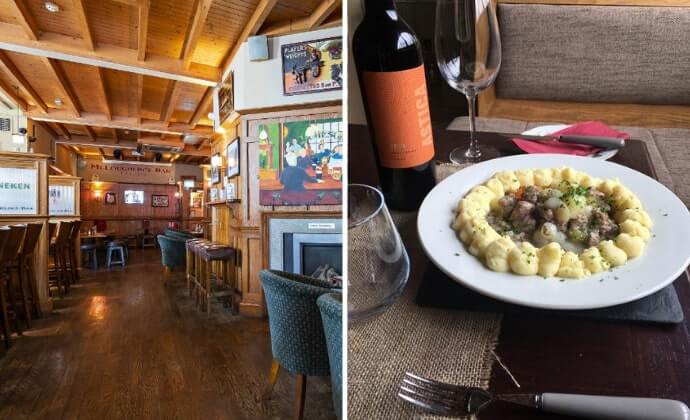 Photos via McLoughlin’s Bar on FB

The cosy McLoughlin’s Bar has been present in Dun Laoghaire since way back in 1903, and you’ll find it a short stroll from the People’s Park.

In the downstairs bar, you’ll find all of your usual drinks on tap, along with a decent bit of pub grub, if you’re feeling peckish.

If you fancy a bit of music, this is one of a handful of Dun Laoghaire pubs that holds live trad and folk sessions (see their website above for event info).

As you’ve probably gathered at this stage, there’s an almost endless number of great bars in Dun Laoghaire on offer.

If you’re not sold on any of the previous choices, the section below is packed with some more highly-reviewed Dun Laoghaire pubs. 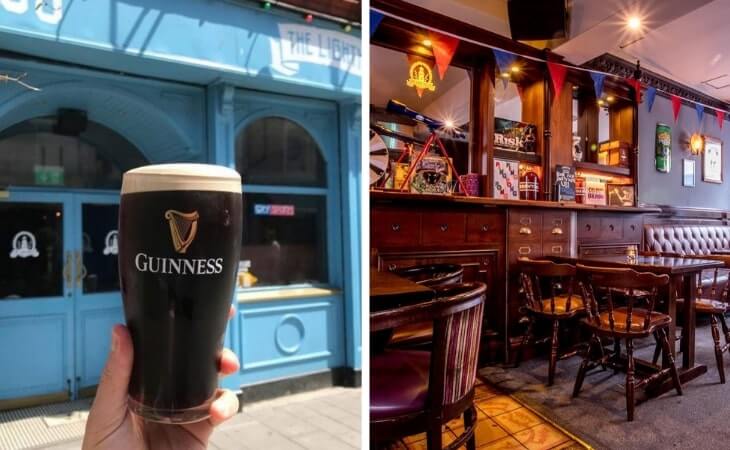 Photos via The Lighthouse on FB

The Lighthouse is a popular pub, cafe and deli on George’s Street Lower. You can kick-back indoors or you can plonk yourself at one of the tables outside.

There’s even a Games Room, a weekly table quiz (Friday & Saturdays from 9pm), 50+ board games and a pool table, so you’ll be kept busy!

Open from 10am, it’s a great place for a glass of wine, a pint or a cocktail and they serve a tasty brunch on weekends. The deli offers a mouthwatering array of hot and cold sandwiches, soup and hot drinks. Perfect for warming up after a dip in the Forty Foot! 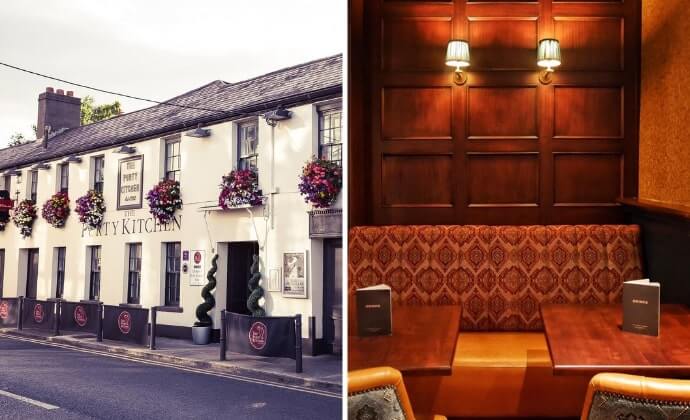 Photos via the Purty Kitchen on FB

Nestled on Old Dunleary Road, The Purty Kitchen is a vibrant bar, kitchen and loft. Despite its modern decor and plush restaurant, it dates back to 1728!

Those whitewashed walls have welcomed heads of state, sea admirals, merchants and seafarers as well as locals and modern-day tourists.

It’s a lovely place for a meal as well as a drink. Try the generous sharing plates of buffalo wings or garlic prawns or Irish fare such as Daube of Beef or Pork Belly with Black Pudding Crumb. Upstairs, the Loft offers live entertainment. 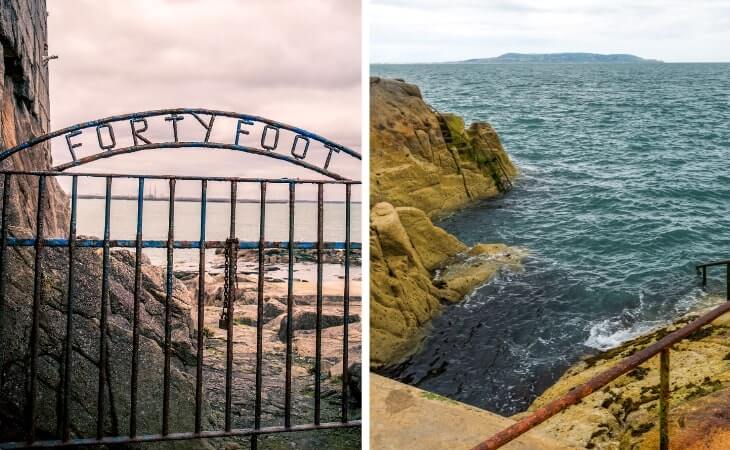 The newcomer on the block is The Forty Foot (not pictured above), part of the Pavilion Theatre Complex on Marine Road. It offers a vast choice of drinks and tasty food along with amazing views of Dun Laoghaire harbour.

The pub is named after the Forty Foot, a deep-water swimming hole just along the coast. Set in a historic building that has twice been destroyed by fire, this smart new pavilion was built in 2003.

Take an outdoor table on the first floor terrace and enjoy the waterfront setting while enjoying a pint, a coffee or a fruity cocktail perhaps?

What Dun Laoghaire pubs have we missed?

I’ve no doubt that we’ve unintentionally left out some brilliant pubs in Dun Laoghaire from the guide above.

FAQs about bars in Dun Laoghaire

We’ve had a lot of questions over the years asking about everything from ‘What pubs in Dun Laoghaire are the most traditional?’ to ‘Which are the fanciest?’.

What are the best pubs in Dun Laoghaire?

In our opinion, the finest bars in Dun Laoghaire are McKenna’s, O’Loughlin’s, Dunphy’s and Buck Mulligans.

What Dun Laoghaire pubs are the most old-school?

If you’re after old-school bars in Dun Laoghaire, you can’t go wrong with Dunphy’s, O’Loughlin’s, McKenna’s and P. McCormack’s.

I love McCormack pub for great food even with kids. Evenings for beer with some music, not crazy but perfect for chatting with your friends.