>If you’re debating staying in Dun Laoghaire in Dublin, you’ve landed in the right place.

Dun Laoghaire is a coastal resort community 12km south of Dublin. It’s a fine place for a day trip or, if you’re wondering where to stay in Dublin, it make a very scenic base to explore from.

There’s endless things to do in Dun Laoghaire and there’s plenty of walks, beaches and scenic drives a short spin away.

In this guide, we’ll take a look at what makes Dun Laoghaire such an amazing place to visit and why you might just want to call it home!

Although a visit to Dun Laoghaire is fairly straightforward, there are a few need-to-knows that’ll make your visit that bit more enjoyable.

Just 12km down the road from Dublin City, Dun Laoghaire is a major port and harbour. It sits on the south coast of Dublin Bay between Blackrock and Dalkey. It’s also a stone’s throw from Killiney, too.

With its lengthy promenade and bustling port, Dun Laoghaire has a nice coastal vibe. The People’s Park, pier, waterfront cafes and amusements add to the town’s traditional resort atmosphere. The Mariner’s Church now houses the National Maritime Museum while the 820-berth marina is the largest in Ireland.

The seaside town of Dun Laoghaire makes an excellent base for visitors wanting to explore the area. Beautiful beaches and boat trips can be enjoyed nearby. Just 12km from the city centre, Dun Laoghaire is a short spin from many of the best places to visit in Dublin. 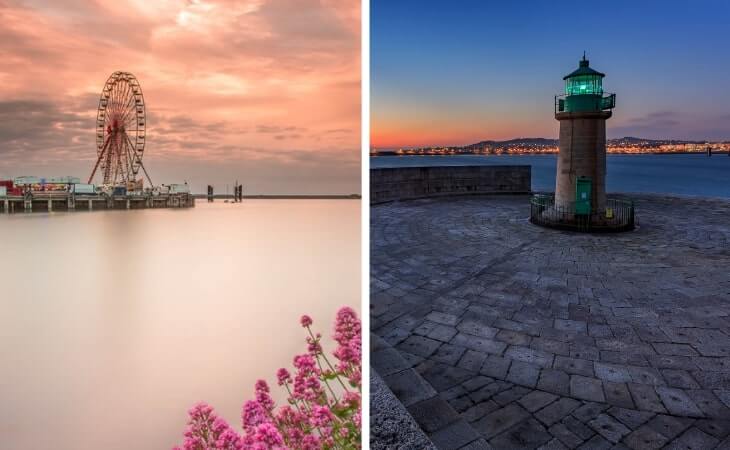 The coastal town of Dun Laoghaire has an interesting past as a busy harbour, ferry port and seaside resort for Dubliners in Victorian times. It was built as a port to serve Dublin and was the terminus for the Dublin and Kingstown Railway, Ireland’s first railway.

Established in 1816, Dun Laoghaire was originally known as Dunleary. It was renamed Kingstown just five years later to commemorate the visit of King George IV. In 1920, it was named ‘Dun Laoghaire’, the Irish form of ‘Dunleary’ which means “Fort of Laoghaire”.

Laoghaire Mac Néill was a 5th century High King of Ireland, who  carried out raids on Britain and Western Europe from a fort in this area.

The harbour project changed the area from a small fishing community into one of the busiest ports in Ireland. The harbour was developed after two troopships were wrecked on rocks nearby in 1807 with a loss of over 400 lives.

The port and town plan were drawn up by John Rennie in 1817, starting with the West Pier and St George’s Street. Shortly after, the port was linked to Dublin by Ireland’s first-ever railway and it became a commuter suburb of Dublin.

Things to do in Dun Laoghaire 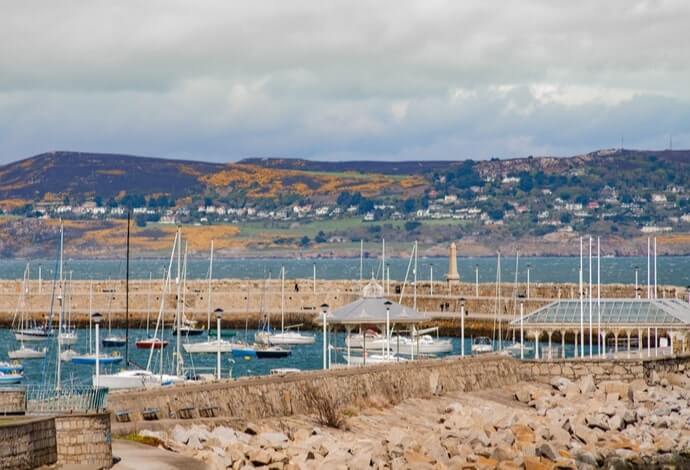 Although we go into what to see in the area in detail in our guide on the best things to do in Dun Laoghaire, I’ll give you a quick overview below.

From hikes and walks to fine food, historical sites and beautiful beaches, there’s no end to the number of things to do in Dun Laoghaire. 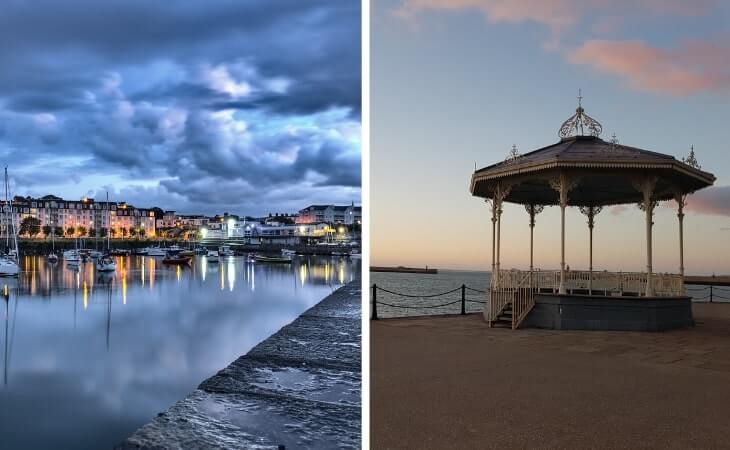 The best way to get a taste of Dun Laoghaire’s history and heritage on the self-guided historic walking tour (get the map here).

Learn about the building of the harbour, railway and royal visits. Admire the best view from Joyce’s Tower in Sandycove and learn the connection between the town and writer, James Joyce.

One of the most popular walks in the area is the stroll that takes you along the East Pier of Dun Laoghaire harbour.

Sights include a lovely Victorian bandstand along with the East Pier Lighthouse overlooking the entrance. The West Pier is even longer, but the surface is less suitable for walking.

3. The National Maritime Museum of Ireland

Where better than the historic Mariner’s Church to accommodate the National Maritime Museum of Ireland?! A stone’s throw from the harbour, the 180-year-old church was renovated and opened as a museum in 1974.

The main collection was collected by Col. Tony Lawlor for the Maritime Institute of Ireland in the 1940s. 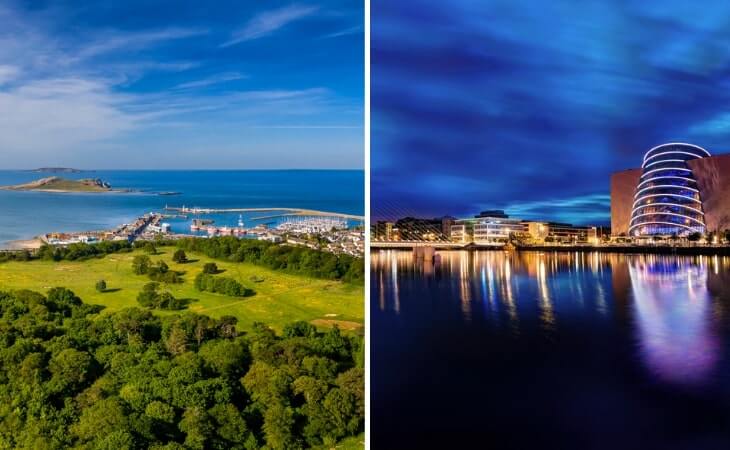 Get out on Dublin Bay and see the stunning coastline from a different perspective with the award-winning Dublin Bay Cruises.

You can set off on one of several cruise tours, including one that takes you over to Dalkey Island and another that’ll take you out to Howth. 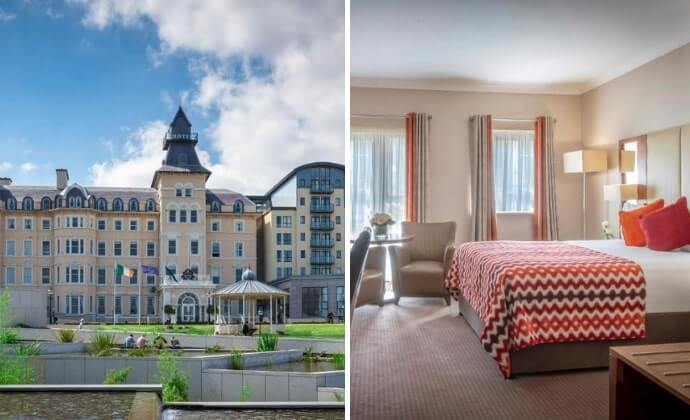 There’s some fine places to stay in Dun Laoghaire, if you fancy making this town your base while you explore Dublin.

The landmark building of the historic Royal Marine Hotel sets the tone for a memorable stay in this luxury four star hotel. It has 228 comfortably furnished rooms, many with stunning views across Dublin Bay to wake up to. It has a full range of amenities including Dun Restaurant, the more contemporary Hardy’s Bar and Bistro and the Bay Lounge.

For a more intimate experience, book a night or two at Haddington House. Set in a collection of tastefully restored Victorian townhouses, it has superb views of Dun Laoghaire Harbour. There are 45 spacious guest rooms, some with sea views. There’s an elegant parlour for enjoying pre-dinner cocktails with fellow guests or a decadent afternoon tea.

For a more modern hotel option, Rochestown Lodge Hotel and Spa is 4km inland from Dub Laoghaire seafront. The complimentary tea and scones on arrival might sway your decision to stay here! Bright spacious guest rooms have sleek ensuite bathrooms with power showers. Wake up bright and early to enjoy a swim in the pool or a workout in the gym.

Places to eat in Dun Laoghaire 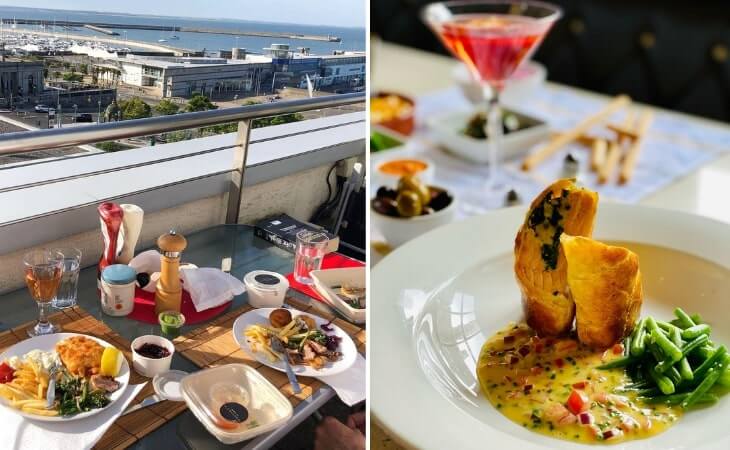 Photos via Hartley’s on FB

You’ll find countless amazing places to grab a top-notch meal in Dun Laoghaire. And there’s much more on offer than just seafood.

You can discover some great places to eat in our Dun Laoghaire restaurants guide, but here are a few of our favourites to get you started.

Located at The Pavilion right on the promenade (Marine Road) in Dun Laoghaire, Casper and Giumbini’s is a modern Irish brasserie with plenty of history and tradition. The name comes from the owner’s grandmother and great-grandmother, who both instilled a passion for quality food and flavour.

Located on Harbour Road a stone’s throw from the pier, Hartley’s combines a classy ambience with wonderful tasty local food. It’s a great place to enjoy seafood such as crab claws, mussels or succulent surf and turf. Generous portions and a fantastic beer menu as well as wine and cocktails will leave you feeling happily satiated.

If you hanker for Indian cuisine, Delhi Rasoi serves delectable authentic Indian cuisine that’s chef-prepared fresh each day. It’s at the Monkstown end of Dun Laoghaire, in the former Gourmet Food Parlour, and it still lives up to that fine sobriquet! Open daily except Tuesday, it offers plush surroundings and wonderful service.

Photos via McKenna’s on FB

While Dun Laoghaire is renowned for its restaurants, it’s equally loved for its pubs, and there’s a wide range of fantastic places to grab a pint.

You can discover some great places to nip into in our Dun Laoghaire pubs guide, but here are a few of our favourites to get you started.

Look out for McKennas on Wellington Street and pop in for a drink or two. This friendly local has a surprisingly decadent lounge bar. It’s a welcoming place where you can relax and take your time sipping a draught craft beer, glass of wine or champagne, if you’re in the mood to celebrate.

Boasting “the best pint in Dun Laoghaire since 1929”, O’Loughlin’s is the oldest family-run pub in town. Known locally as Lockie’s, it’s in a historic area of Dun Laoghaire near the library and retains its sense of community. Join locals at the bar where sport dominates the banter.

Located on Lower George’s Street, Dun Laoghaire’s main street, this public house has been in business since the Famine. Still retaining its Victorian ambience, it has indoor and outdoor places to sit with a drink and socialise. It’s a nice quiet place to relax and concentrate on the quality of your pint.

Since mentioning the town in a guide to Dublin that we published several years ago, we’ve had hundreds of emails asking various things about Dun Laoghaire in Dublin.

Is Dun Laoghaire worth visiting?

Yes! Dun Laoghaire in Dublin is a beautiful harbour town packed with charm and character. It’s home to loads to do and it’s a nice, scenic spot to stroll around.

Are there many places to eat in Dun Laoghaire?

There’s an endless number of places to eat in Dun Laoghaire. From fine dining to pizzas, there’s plenty to choose from.

Are there many things to do in Dun Laoghaire?

Yes, there’s plenty of things to do in Dun Laoghaire. However, the town’s big draw is it’s proximity to many of the best places to visit in Dublin.