Few streets in Ireland are as well-trodden as Grafton Street in Dublin.

There’s some popular shops on Grafton Street (if that’s you’re kind of thing!) and there’s lots of great restaurants and pubs near Grafton Street to nip into.

The history of Grafton Street all begins back in the early 18th century, as you’ll discover later in this guide. In the 19th century, the street became commercialised.

Below, you’ll find everything from the best old-school pubs on Grafton Street to where to grab a great bite to eat.

Some quick need-to-knows about Grafton Street in Dublin 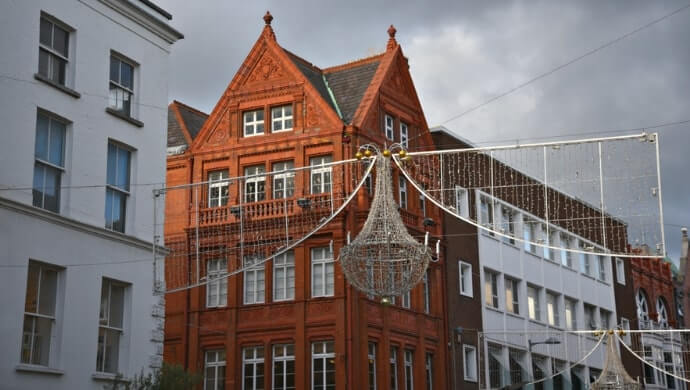 Although a visit to Grafton Street in Dublin is fairly straightforward, there are a few need-to-knows that’ll make your visit that bit more enjoyable.

Grafton Street runs from St Stephen’s Green in the south to Trinity College in the north. It’s easy to get to and it’ll only take you 6 or 7 minutes to walk up or down it.

Did you know that Grafton Street is not just the busiest shopping street in Ireland, but also among the busiest in Europe? Shops include Weir and Sons, the iconic jewellers, and a wide range of well-known clothing brands. Tourists and residents alike flock there for a good ol’ dose of retail therapy.

The sheer number of restaurants, pubs and shops on Grafton Street is astounding. Brown Thomas has been on its premises since 1848 and there’s several pubs near Grafton Street that have been keeping weary travellers watered for hundreds of years.

A brief history of Grafton Street 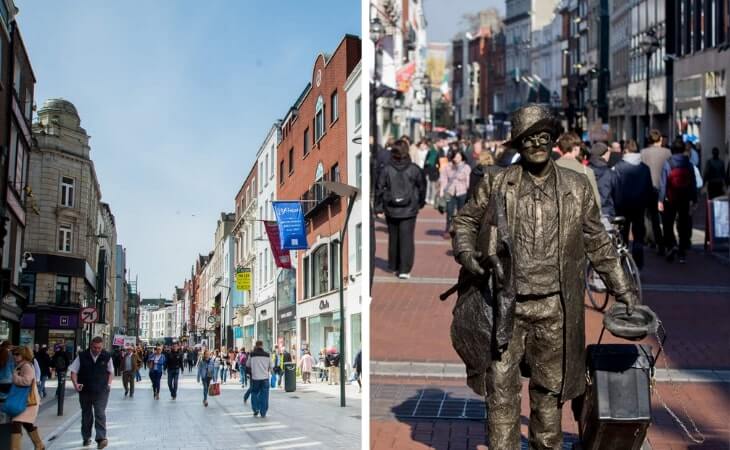 So, who gave Grafton Street its name? One Charles FitzRoy, the 2nd Duke of Grafton, and the son of one of King Charles II’s illegitimate children, who owned land around the area.

Grafton Street started as a lane that connected College Green to St Stephen’s Green, and it was widened and developed in the early 18th century. It began as a mix of residential and commercial properties and was largely rebuilt in the late 18th century.

By the late 19th century, the street was mainly commercial. It had become increasingly dilapidated during the course of the 1800s, and became well-known for prostitution when in the 1870s, some 1,500 sex workers were thought to use the street.

The street was permanently pedestrianised in the 1980s, and in 2016, Grafton Street was the 13th most expensive main shopping street in the world at approximately €3,300 by square metre per year.

It’s now one of the most popular places to go shopping in Dublin. Over the years, it has become famous for buskers, including musicians, poets and mime artists. Famous names who have busked there include Keywest, Damien Rice and Bono.

Where to stay near Grafton Street in Dublin 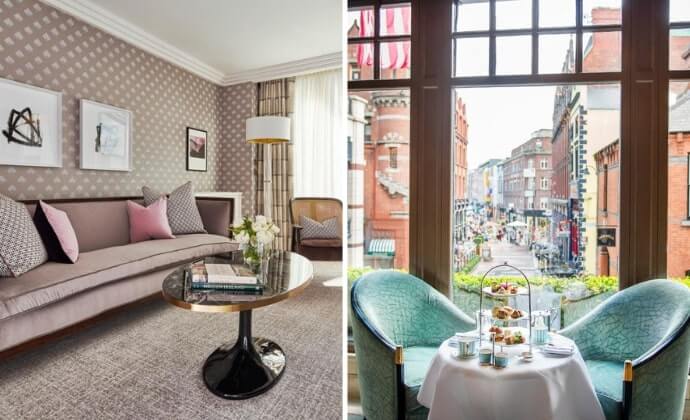 There are plenty of hotels near Grafton Street in Dublin, with many sitting less than a minute from its main street.

Want to treat yourself to the 5-star Dublin experience? The Westbury is the place to stay. Why not opt for the Suite Celebration with Bubbles, where you and your partner will stay in one of the luxury suites, enjoy an a la carte breakfast, a complimentary bottle of chilled Prosecco and late check-out?! The Wilde Restaurant fuses 1930s elegance with plenty of greenery to provide the sense of dining alfresco.

Built in 1996, the Brooks Hotel is a four-star boutique hotel on Drury Street, only a few minutes from Grafton Street. There are 98 bedrooms, meetings rooms and a private 26-seat screening room. Francesca’s Restaurant in the hotel is an affiliate of Good Food Ireland. With its open plan kitchen, award-winning head chef Patrick McLarnon and his team prepare organic and artisan dishes with locally sourced ingredients.

For a bird’s eye view of St Stephen’s Green, book into the Shelbourne which has been in place in the beating heart of Dublin for almost 200 years. There are fabulous bedrooms (suites are named after notable visitors such as JFK, Princess Grace and Michael Collins), lively bars and lounges to choose from and many delicious dishes to take your fancy in the various bars and restaurants. 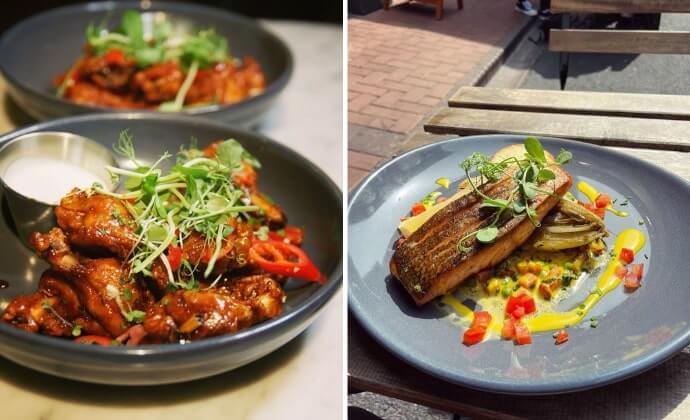 You’ll find some of the best restaurants in Dublin in and around Grafton Street, with everything from fine dining to cheap and tasty meals on offer.

For the best teas and coffees, Bewley’s is the place to go. Here, you will find plenty of options for lunch (they do takeaway too), with sandwiches a plenty and mouth-watering cakes to choose from. This is the most iconic place for coffee in Dublin for good reason.

Xi’An Street Food has two locations in the city – one on South Anne Street, and the other on North Earl Street. It specialises in the cuisine of the Xi’An area of China. All dishes are cooked to order with fresh ingredients and the chefs shun artificial flavourings and MSG, and use 100 percent Irish beef, Halal chicken and Halal beef in the dishes.

Head chef Gareth Lennox at Lemon & Duke uses fresh, local produce to create menus that lean heavily on both European and Asian cuisine. Lunch options are gourmet sandwiches, alongside salads using select meats and fresh fish, whereas the evening menu offers heartier options such steak or a classic eggs benedict. Vegetarians, vegans and coeliacs can be catered for.

The best pubs around Grafton Street 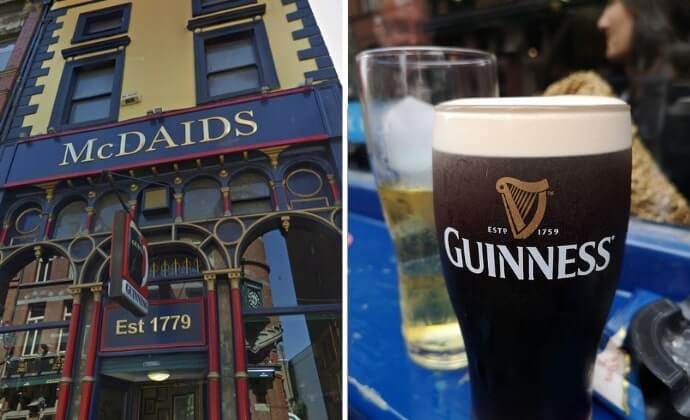 Some of the oldest pubs in Dublin are located just off Grafton Street, and there’s an almost endless number of places for a tipple, if you’re feeling thirsty.

Neary’s bar and lounge is one of Dublin’s oldest and most famous bars, serving Guinness, Irish whiskeys and food. The street where it is located, Chatham Street, dates to 1773 and the name Neary can be traced to the 1880s when a Thomas Neary took over as the proprietor of the tavern there and many of the original features from that time remain.

Kehoe’s is a heritage pub that also describes itself as the quintessential Irish pub. It was first licensed in 1803 and the premises that is in Dublin today was completed at the end of the 19th century. Its style is typical of that time and remaining features include stained glass mahogany doors, old Irish snugs and partitions.

The no-frills McDaids is a true representative of the Irish boozer and is renowned for the quality of its pints. There’s an upstairs too, which is quieter than the downstairs area, and the venue is known to be a literary haunt frequented by the likes of Brendan Behan, Patrick Kavanagh, John Ryan and Liam O’Flaherty. The pub was once the city morgue and later a chapel for the Moravian Brethren, which you can see in the high ceilings and the Gothic style windows.

Where to visit near Grafton Street in Dublin

You’ll find many of the best places to visit in Dublin a short stroll from the hustle and bustle of Grafton Street.

Below, you’ll find everything parks and historical sites to museums, gorgeous gardens and much more. 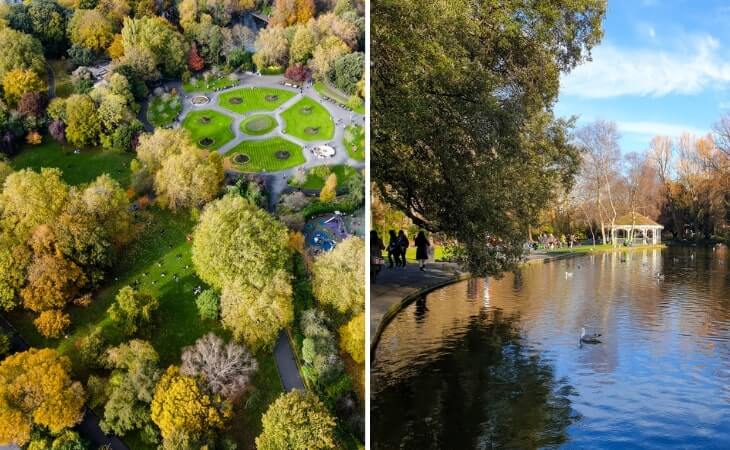 As Grafton Street is so near to St Stephen’s Green, you can abandon the hustle and bustle easily enough to walk around this well-known park where Dubliners have gathered for centuries.

Opened to the public ‘properly’ by Arthur Guinness in the late 19th century, the park was relandscaped and retains many of its original Victorian style features. There are monuments a-plenty all around and bedding plants that change with the seasons.

Founded in 1592 by Queen Elizabeth I, Trinity College is one of the seven ancient universities of Britain and Ireland, and many visitors flock there every year to see its greatest treasure, the Book of Kells.

Trinity College featured in Sally Rooney’s best-selling novel, Normal People, which led to a substantial increase in applications to the college following the broadcast of the TV adaptation in 2020. 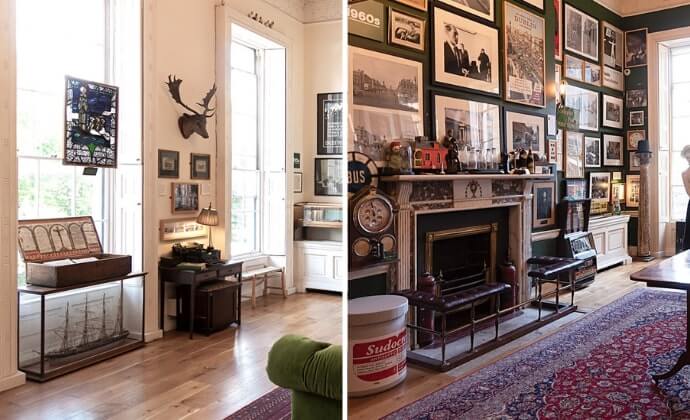 Photos via The Little Museum Of Dublin on FB

Some of the best museums in Dublin are a short walk from Grafton Street, like the excellent Little Museum of Dublin.

The Museum of Literature, the National Gallery of Ireland, the Natural History Museum and more are a stone’s throw away. 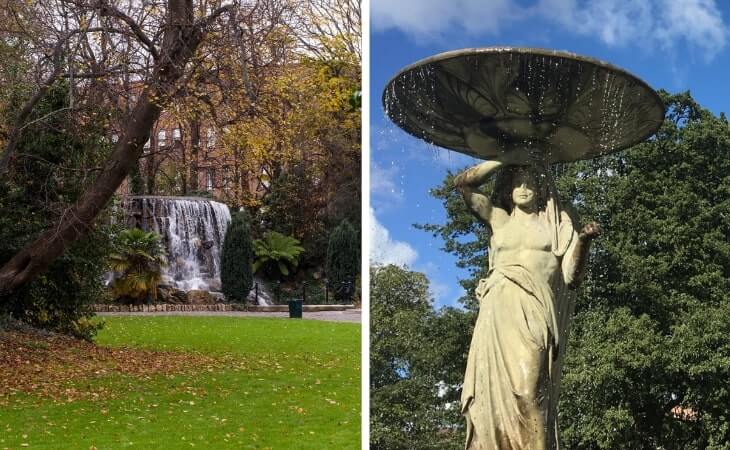 There are two more gorgeous green spaces to explore near Grafton Street. The first, and the closest, are the Iveagh Gardens.

This is a small park that has a mini waterfall and decent bit of space where you can escape the crowds. The next is Merrion Square. It’s here that you’ll get a glimpse at what life was like in Georgian Dublin.

What are the best pubs and restaurants on Grafton Street?

Pub wise, Kehoe’s and Neary’s are at the top of the pack. For food, the Bailey, Xi’An Street Food and Lemon & Dukeare worth checking out.

What is there to see around Grafton Street?

At one end, there’s Trinity College, the Book of Kells and The Long Room Library, to name a few. On the other, there’s Stephen’s Green, the Iveagh Gardens and more.