There are few beaches in Wexford with as interesting a story behind their name as Dollar Bay Beach.

According to the local myth, there’s a whole load of pirate treasure hidden somewhere on this stunner of a beach!

But, while the chances of you striking rich while you’re at Dollar Bay are pretty slim, it’s still a fine spot to visit any time of year and is situated among some of Wexford’s best-known sights.

In the guide below, you’ll find info on parking, swimming and things to look out for while you’re there.

Some quick need-to-knows about Dollar Bay in Wexford

Although a visit to Dollar Bay Beach is fairly straightforward, there are a few need-to-knows that’ll make your visit that bit more enjoyable.

The little road that heads down towards Dollar Bay is signposted and you’re free to park there (here on Google Maps), although make sure you don’t block the road and give ample space for other drivers to move.

While we can’t find any information from official sources on swimming at Dollar Bay (and we’ve tried, trust me!), many reviews online generally only have good things to say. However, we’d recommend checking locally before entering the water here, just to be sure.

You know that when it comes to tales of buried treasure, pirates are never going to be too far away! And that’s exactly the case with Dollar Bay. We’ll get into it more in the next section but suffice to say that there’s a pretty intriguing story behind Dollar Bay’s name… 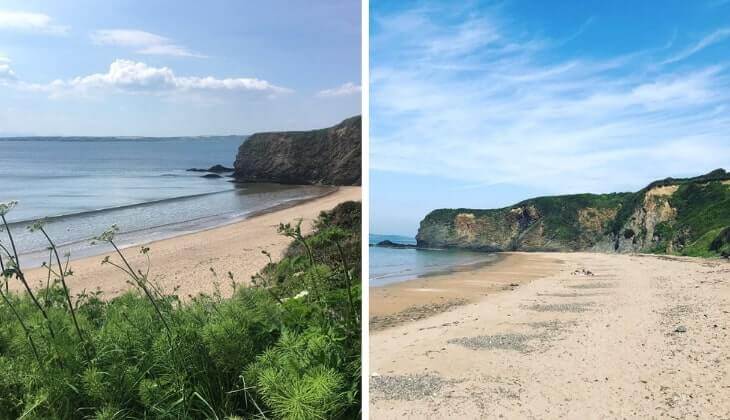 Making its way back from the Canary Islands in 1765, the Earl of Sandwich was a ship carrying a hoard of milled gold and – unfortunately for most of the crew – a band of mutineers! The brutal tale tells of how these four devious crewmen attacked and killed their shipmates and captain, all save the cabin boy.

They flooded the ship and watched it capsize, before rowing away with 250 sacks of gold (almost two tonnes) and coming ashore at Dollar Bay. Only able to carry one bag of gold between them, they buried the rest of the sacks in the sand (hence the beach’s name!) before making their getaway for Dublin.

There’s even a happy ending, as apparently the cabin boy told a search party about the mutineers and they were soon caught and hanged.

Things to do at Dollar Bay 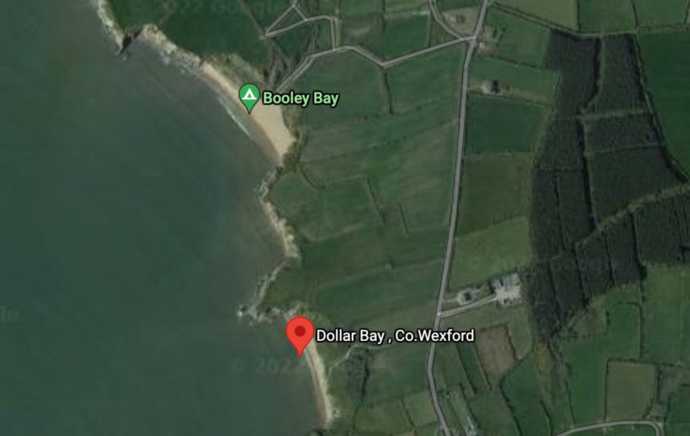 There’s plenty of things to do in and around Dollar Bay in Wexford that makes it the perfect destination for a morning or afternoon out.

1. Soak up the sights and sounds on one of Wexford’s top beaches

Now you know the story, when you visit you can kick back and relax knowing all the drama that once took place on this famous beach!

Tranquil with high, sandy cliffs that bend around to several rocky outcrops giving shelter from the prevailing winds, this secluded beach is good a ramble or for paddling at either high or low tide. You’ll also get some lovely views too towards Waterford across the estuary, especially at sunset.

Just don’t get your hopes up too high if you decide to dig for treasure!

2. Walk to nearby Booley Bay

Just as pretty as Dollar Bay and only a short walk away, Booley Bay faces the same direction and offers similar gorgeous coast views.

Sheltered by cliffs and containing pristine golden sands that are perfect for relaxing on, it’s also one of only 63 Green Coast accredited beaches across Ireland. Basically, its water quality is superb so don’t hesitate if you fancy a dip!

One thing to note, however, when moving from Dollar Bay to Booley Bay – you’ll need to head back onto the road and walk around to reach it (not something that’s immediately obvious on maps).

3. Then tackle the Ring of Hook drive

The Hook Peninsula is full of fabulous sights, both ancient and natural, and thankfully there’s a drive that can cover them all in the space of an afternoon!

Starting just north of Tintern Abbey, the Ring of Hook drive winds down to Hook Lighthouse before meandering back up north and looping back around to the beginning.

The drive can actually be completed in space of an hour if you’re really pushed for time, but that would be a bit of a waste considering the Hook Peninsula’s far-flung location.

One of the beauties of Dollar Bay is that it’s a short spin away from many of the best places to visit in Wexford.

Below, you’ll find a handful of things to see and do a stone’s throw from Dollar Bay Beach. 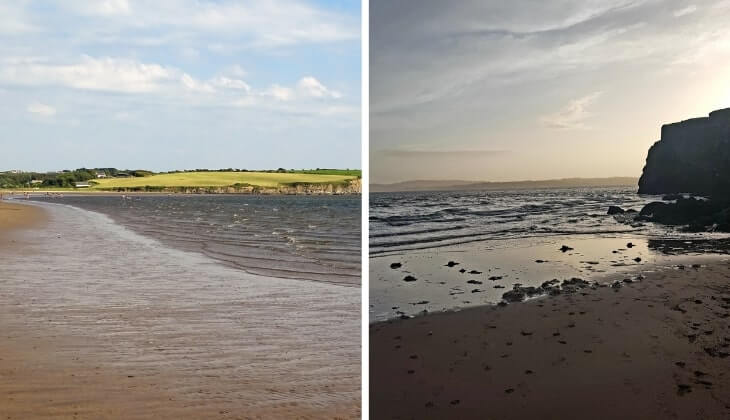 Dating back to 1587, Duncannon Fort is a star fort that was constructed strategically to defend Waterford from possible invasion by the Spanish Armada, believe it or not. Just a 5-minute drive from Dollar Bay, one thing to bear in mind is that it’s only open for tours during the summer months. 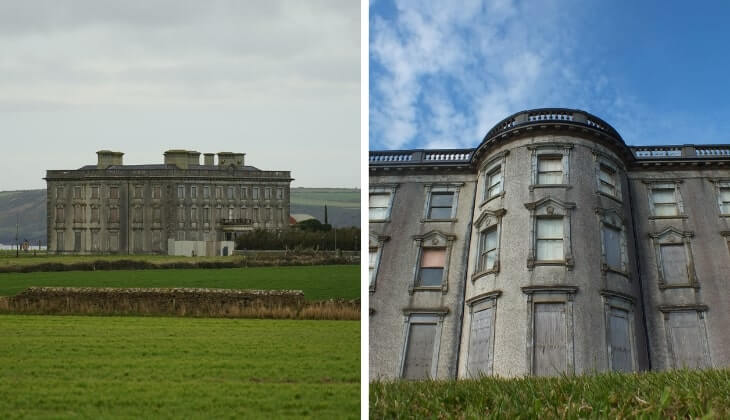 A pretty conspicuous sight situated about midway down the western side of the peninsula, Loftus Hall dates back to the 14th century and is about a 10-minute drive from Dollar Bay. Once attacked and damaged during the Irish Confederate Wars of the 17th century. It was sold in 2021 and it’s set to become a luxury hotel.

If you’ve come all the way to the Hook Peninsula, then it would be a crime not to check out the iconic Hook Lighthouse. Not only is it by some stretch the oldest lighthouse in Ireland, it’s actually the second-oldest operating lighthouse in the world! Make the 15-minute drive down from Dollar Bay and see the famous sight up close.

We’ve had a lot of questions over the years asking about everything from ‘Where did the name come from?’ to ‘Where do you park?’.

Is parking really a nightmare at Dollar Bay Beach?

It can be. There’s no dedicated parking here, so you have to park along the road leading to it, which can get very busy during summer.

Can you swim at Dollar Bay in Wexford?

Despite a lot of effort, we can’t find info from official sources on swimming here, so check locally before entering the water.

Love this place....its a little known place....its my go to place....and now you've ruined it by telling the world 😂 Amazing sunsets, perfect sand, super escape. Little or no phone signal, it's the perfect getaway from the rat race.

Ah, sorry James!! I always find Wexford to be a funny one, though. Despite the incredible coastline and the many rambles on offer, people tend to either 1, not visit at all or 2, stay on the main tourist track. So, hopefully this article doesn't have any unintended consequences. Cheers for reading and I hope you've a lovely (and sunny....) summer!