The Dunbrody Famine Ship is a great attraction to nip into for those of you looking for things to do in Wexford that offer an insight into Ireland’s past.

Situated in New Ross, the Dunbrody Famine Ship takes brings to life ‘Coffin Ships’ and the role they played during the famine.

In the guide below, you’ll discover everything you need to know, from prices and tours to what to expect from a visit. 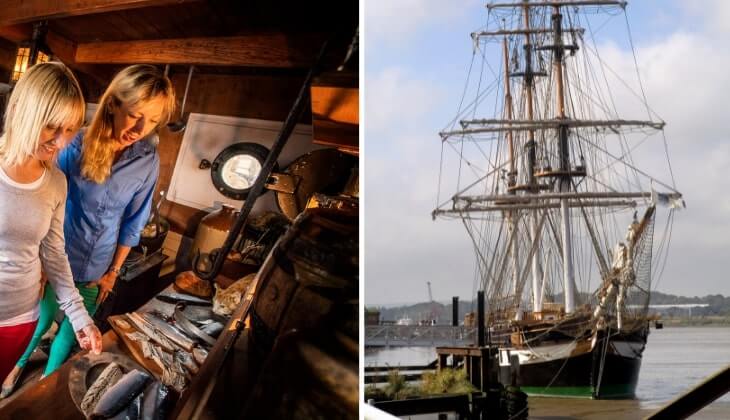 Although a visit to Dunbrody Famine Ship is fairly straightforward, there are a few need-to-knows that’ll make your visit that bit more enjoyable.

Ticket prices vary depending on the person. Here are the prices for 2022 (accurate at the time of typing):

The tour allows you to experience life on board the Dunbrody Famine Ship in the 19th century at a time when thousands left Ireland during the Great Famine. The Dunbrody Tour Experience incorporates costumed performers and themed exhibitions that offer an insight into what life was like on board the ship.

On the first floor of the Visitor Centre, you will find Captain’s Table, a restaurant overlooking the River Barrow. You’ll get a great view of both the vessel and New Ross from here. The Captain’s Table has a breakfast menu, a lunch menu and kids menu with everything from Fillet Haddock and Indian style chicken curry on offer.

About the Dunbrody Famine Ship

If you’re not familiar with Famine Ships, you’re in for an enlightening experience, as the Dunbrody Famine Ship immerses you in what was a terrifying time for many families in Ireland.

The original Dunbrody ship was commissioned by William Graves & Son in the mid-19th century along with other seven ships. It took only six months to finish and in 1845, the Dunbrody Ship left the harbour of Quebec.

The beginning of the Famine

In the same year, the Irish Great Famine started and many families and individuals looked to escape the island in an attempt to keep themselves and their families alive.

However, there wasn’t enough passenger ships to carry all that wanted to leave. So, several entrepreneurial merchants, like the Grave’s, turned their cargo ships into passenger ships.

Initially, The Dunbrody Ship carried cargos of guano, cotton and timber, but from 1845 it started to welcome on board the many people who wanted to leave Ireland.

In 1996, the JFK Trust started the construction works of a replica of the Dunbrody Ship. Six shipbuilders supervised the project headed by Michael Kennedy. Over the course of five years, more than 150 locals were involved in the project.

The frames were made of Irish oak while for the major structural timbers African trees were imported. This project became so popular that even during the construction works more than 100,000 people from all over the world came to visit the dry dock.

What to expect from the Dunbrody Famine Ship Experience 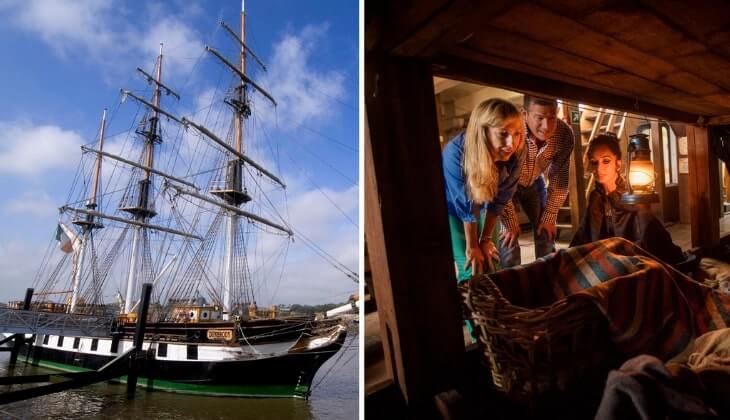 There’s plenty to see and do onboard the Dunbrody Famine Ship. Here’s an insight into some of what you’ll experience during your visit:

1. An insight into life on a ‘Coffin Ship’

The trip from Ireland to the US lasted six long weeks. Passengers spent most of their time locked in the decks and were only allowed one hour of fresh air per day. Hygiene was poor, buckets were used as toilets and people would wash themselves and their clothes with sea-water.

Many illnesses soon spread, from cholera to typhus, and some passengers never made it to their final destination. On average, approximately 20 percent of the people on board were buried at sea.

The Dunbrody Irish Emigrant Experience will give you a glimpse of the conditions that many who left Ireland had to endure. The stories are narrated from the point of view of the emigrants themselves – ordinary people who could no longer live in their homeland and decided to leave everything they knew for an uncertain future.

First, you will be given an insight into the Famine and its consequences for the people of Ireland. You will then enter into the vessel and witness what life was like on board.

This experience is deeply touching as, from the moment you step on board, you will be brought back in time. You will enter the deck of the ship and from here you will listen to the monologues of the many costumed actors describing in detail their experiences.

The tour also features themed exhibitions highlighting the bravery of the many who left Ireland to find better opportunities.

Things to do near Dunbrody Famine Ship

One of the beauties of the Dunbrody Famine Ship is that it’s a short spin away from many of the best places to visit in Wexford.

Below, you’ll find a handful of things to see and do a stone’s throw from the Dunbrody Famine Ship! 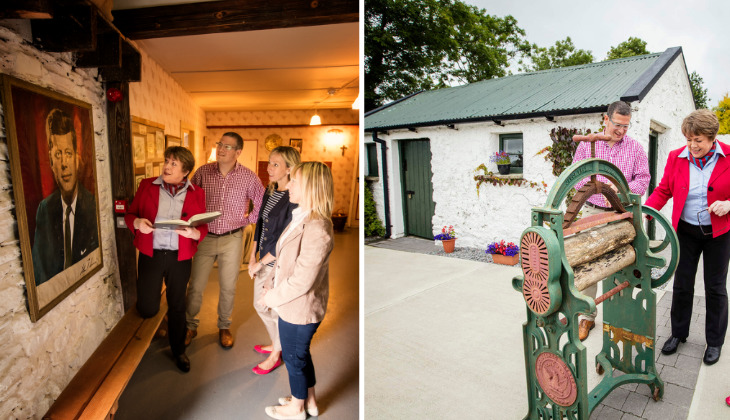 The Kennedy Homestead is located in Dunganstown, south of New Ross. This is the birthplace of John F. Kennedy’s great-grandfather, Patrick Kennedy and here you will find a museum entirely devoted to Kennedy’s family through five generations. 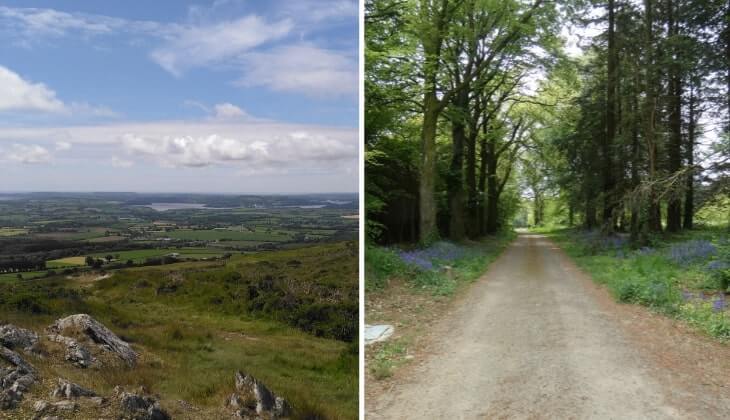 The John F. Kennedy Arboretum covers an area of 252 hectares. This arboretum is home to 4,500 types of trees and shrubs from all over the world. This site also contains a picturesque lake where, with a bit of luck, you will be able to see some waterfowls.

Dunbrody Abbey, located south of John F. Kennedy Arboretum, is a former Cistercian monastery. The main church dates back to the 13th century while the tower bell is from the 15th century. With a length of almost 200 feet (59 metres), this is one of Ireland’s longest churches.

The Hook Peninsula is situated on the east side of the mouth of River Barrow. It’s dotted with attractions including Tintern Abbey, Hook Lighthouse, Loftus Hall and Dollar Bay Beach.

We’ve had a lot of questions over the years asking about everything from ‘How much are tickets?’ to ‘What’s involved?’.

Is the Dunbrody Famine Ship worth visiting?

Yes. This is an immersive experience that offers a unique insight into life on board a Coffin Ship during the Irish Famine. It’s well worth doing.

How much is the Dunbrody Famine Ship tour?