The name Fionn mac Cumhaill tends to pop up in many tales from Irish mythology.

Stories of the adventures of the legendary Fionn Mac Cumhaill (often referred to as Finn McCool and Finn MacCool) were told to many of us as kids growing up in Ireland.

From the legend of the Giant’s Causeway to the story of the Salmon of Knowledge, there’s an almost endless number of Fionn Mac Cumhaill tales that exist.

Below, you’ll find everything you need to know about the ancient Celtic warrior, from who he was and how to pronounce his name to the many tales that he’s associated with.

Who was Fionn Mac Cumhaill?

The legendary Fionn Mac Cumhaill was one of the most prominent figures in Irish folklore. He featured in many stories during the Fenian Cycle of Irish Mythology alongside the Fianna.

Fionn was a hunter-warrior who was as intelligent as he was strong. He fought many battles using both the power of his mind (see the Giant’s Causeway legend) and his celebrated fighting abilities.

The stories and tales about Fionn tend to be narrated by Oisin, Fionn’s son. Fionn was the son of Cumhall (once leader of the Fianna) and Muirne and was from the province of Leinster.

We’re given an insight into Fionn’s early life in ‘The Boyhood Deeds of Fionn’ and we learn where his immense wisdom came from in the story of the Salmon.

One of my favourite stories involving Fionn is the one that surrounds his birth and the mayhem that led up to it. This is a good starting point for many looking to dip their toe into Fenian Mythology as it sets many of the scenes to follow.

The story of the birth of Fionn begins with Tadg mac Nuadat, Fionn’s grandfather. Tadg was a druid, which was a high-ranking class in the ancient world of the Celts. Druids were often religious leaders.

Now, Tadg lived up on the hill of Almu and he had a beautiful daughter named Muirne. Muirne’s beauty was known across Ireland and her hand was sought by many.

One of those that pursued her hand in marriage was Cumhal, the leader of the Fianna. Tadg denied every man that requested to marry his daughter due to a vision. Tadg had foresaw that if Murine was married, he would lose his ancestral seat.

Battle and the Birth of Fionn Mac Cumhaill

When Cumhal visited Tadg and requested his blessing, Tadg refused. Cumhal, who was used to getting his own way, was enraged and he kidnapped Muirne.

Tadg sent a message of what had happened to a High King who declared Cumhal’s actions unlawful and he sent men to pursue him and return Muirne to her father.

Cumhal was eventually killed in battle by Goll Mac Corna, who when on to become the leader of the Fianna. However, by this time, Murine was already pregnant. She tried to return to her father but he disowned her.

Fionn was soon born and, as you’ll see in the many tales below, he became a great warrior. Muirne left Fionn with a druidess called Bodhmall and a woman named Liath Luachra, who became his foster mother.

His mother only saw him once again, when he was six. When he grew up it wasn’t long before he took the leadership of the Fianna from Goll, the man who killed his father. 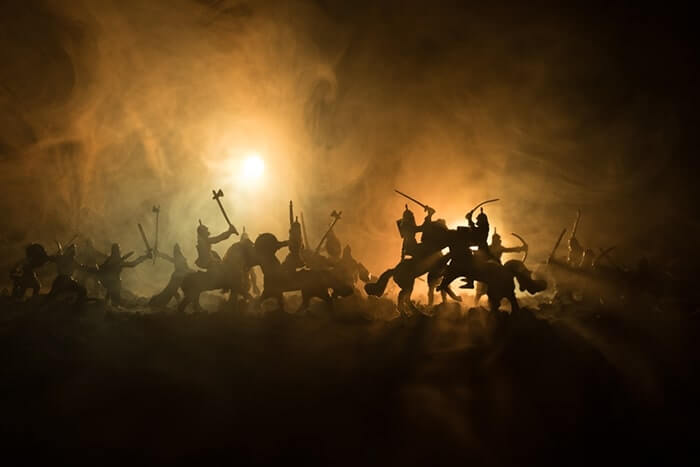 Before we get into the many legends that feature Fionn, we have to talk about the Fianna. These were a fierce band of warriors that roamed around Ireland.

The Fianna were mentioned in early Irish law and were referenced as a group of young men known as the ‘Fiann’ who were said to be ‘landless’ / without a home.

If you’ve read our guide to the Fianna, you’ll know that only the strongest and cleverest of men were accepted into the group, so a rigorous test that assessed a man’s strength and intelligence was put in place.

The Fianna met their end during the Cath Gabhra. The story begins with a man Cairbre Lifechair, a High King whose daughter was engaged to a prince. Cairbre’s sons killed the prince and the marriage never happened.

However, Fionn, the leader of the Fianna was promised a payment when the marriage went ahead. He believed that the payment was still due. Cairbre was mortally offended and a battle that led to Fionn’s death commenced.

Some of the greatest legends from Irish folklore involve tales of Fionn’s adventures around Ireland. In the section below, you’ll find some of the best legends from the Fenian Cycle of Irish mythology, including:

Legend 1: The Salmon of Knowledge

The story begins when a young Fionn was sent to be an apprentice with a poet name Finnegas. One day, Fionn and the poet were sat near the River Boyne when Finnegas told Fionn about the Salmon of Knowledge.

The salmon had eaten a number of magical nuts from a nearby hazel tree and it was said that the nuts gave the fish the wisdom of the world.

Finnegas told Fionn that the person who caught and ate the fish would inherit its wisdom. Then, out of sheer luck, Finnegas caught the fish, and things took a strange turn. Read the rest of the story in our guide to the Salmon of Knowledge.

Legend 2: The Pursuit of Diarmuid and Grainne

Grainne, the daughter of Cormac MacAirt, Ireland’s High King was set to marry the great warrior Fionn Mac Cumhaill. When she accepted his proposal, an engagement party was planned and people travelled from across Ireland to be there.

On the evening of the party, Grainne was introduced to Diarmuid, a member of the Fianna, and she fell head over heels in Love.

She realised in an instant that she wanted to spend the rest of her life with Diarmuid and not Fionn. So, in an attempt to tell Diarmuid how she felt, she drugged the entire party… Read what happened in our guide to the Pursuit of Diarmuid and Grainne.

The legend of Oisin and Tír na nÓg is one of the most popular stories from Irish folklore. The story begins on a day when Oisin, Fionn (his father) and the Fianna were out hunting in County Kerry.

They were resting when they heard the sound of an approaching horse. When the horse came into view, they saw that its rider was a beautiful woman named Niamh.

Niamh announced that she had heard of a great warrior named Oisin and that she wanted him to join her in Tir na nOg, a land where all that made it there would be given eternal youth. Read the full story in our guide to Tir na nOg.

Legend 4: The Creation of the Giant’s Causeway

According to legend, a battle between Fionn MacCumhaill and a Scottish giant led to the creation of the Giants Causeway in Antrim.

A Scottish giant named Benandonner challenged Fionn to a fight so that he could prove that he was a better fighter than any giant in Ireland.

Fionn was enraged, but how would he get to Scotland? He decided that the best way over would be to build a path strong enough to hold his weight. Finn got to work. Read more about the battle in our guide to the Giant’s Causeway legend.

Love tales, stories and legend (and beer?). Drop into our guide to Irish culture!