The history of Irish whiskey is an interesting one, however, there are lots of variations online.

So, it’s worth taking any guide online (including this one!) that tackles ‘Where did whiskey originate?’ with a pinch of salt.

In the guide below, I’ll give you the history of Irish whiskey as I know it, with plenty of tales thrown in for good measure.

Some quick need-to-knows about the history of Irish whiskey 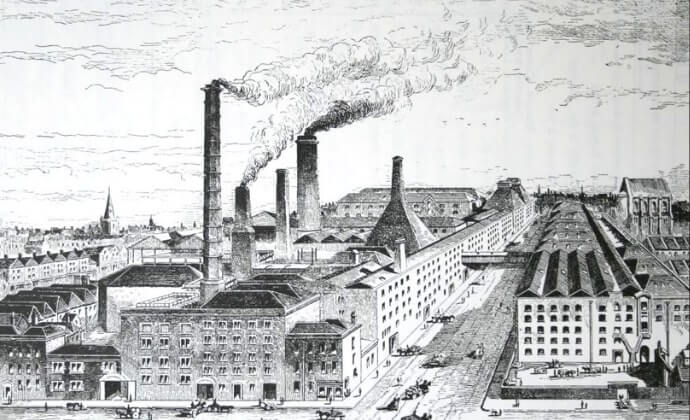 Photo in the Public Domain

Before we tackle the question of ‘When was whiskey invented?’, there are a handful of need-to-knows that’ll get you up-to-speed quickly.

1. Where does whiskey come from

So, both the Irish and the Scots claim to be the inventors of whiskey. The Irish claim that monks returning from their travels in Europe brought with them distilling expertise (circa 1405), while the Scots have written evidence of it dating back to 1494.

2. When was whiskey invented

The history of Irish whiskey is hard to follow, at times, as its story begins over 1,000 years ago. Whiskey in Ireland dates from 1405 in the Annals of Clonmacnoise, where it is noted that the head of a clan died after “taking a surfeit of aqua vitae”.

3. Where it is today

Irish whiskey can be found right the way around the world in 2022. There’s endless Irish whiskey brands and there’s new whiskey distilleries in Ireland popping up each year, with more and more people opting to sample the amber fluid.

A brief history of Irish whiskey 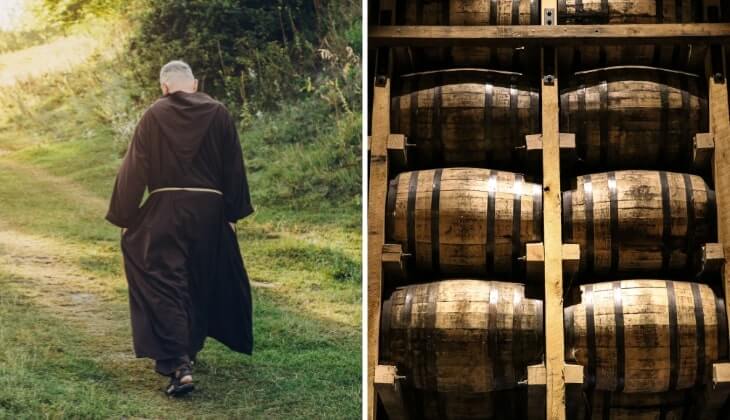 Pinpointing the exact origins of anything made 1,000 years ago is going to be fraught with danger! When it comes to whiskey in Ireland, there’s a general belief that it all began with monks bringing back methods of distillation that they had learned during their travels around southern Europe.

But while it was distillation techniques of perfumes that they had learned, thankfully when they returned to Ireland they began using those methods to obtain a drinkable spirit instead and thus Irish whiskey was born (in a very rudimentary fashion).

Those early whiskeys probably differed greatly from what we know as whiskey today and in fact may have been flavoured with aromatic herbs such as mint, thyme, or anise.

Records are also hard to come by, though the oldest known written record of whiskey in Ireland dates from 1405 in the Annals of Clonmacnoise, where it is noted that the head of a clan died after “taking a surfeit of aqua vitae”.

For those who enjoy the ‘whiskey vs whisky’ debate, they can take pleasure from the fact that the first known mention of the drink in Scotland dates from 1494!

Periods of growth and success

Following the introduction of licences in the 17th century and official registration of distillers in the 18th century, whiskey production took off and demand for whiskey in Ireland grew significantly, driven both by large population growth, and by displacing the demand for imported spirits.

Although this time period wasn’t without its challenges as plenty of illicit whiskey was still being made outside of the large urban centres like Dublin and Cork. In fact, so much illicit spirit was available during this era that the licensed distillers in Dublin complained that it could be obtained “as openly in the streets as they sell a loaf of bread”!

However, once these were under control, expansion continued rapidly and famous names such as Jameson, Bushmills and George Roe’s Thomas Street Distillery became registered, it wasn’t long before Irish whiskey became the biggest selling whiskey in the world throughout the 19th century.

Eventually, however, Scotch whisky became the number one spirit in the 20th century and Irish whiskey fell by the wayside. There are a few factors which lead to the eventual closure of Dublin and Ireland’s numerous distilleries, but first let’s look at a few figures.

There were 28 distilleries in operation in Ireland in 1887, yet by the 1960s there were only a handful remaining in operation and in 1966 three of these – Jameson, Powers and Cork Distilleries Company – amalgamated their operations to form Irish Distillers. By this time only around 400,000–500,000 cases per annum were being produced, yet in 1900 Ireland was producing 12 million cases.

Some of the issues in the early 20th century that lead to that decline were the the Irish War of Independence, the subsequent civil war, and then a trade war with Britain. American Prohibition also severely hurt exports to the huge US market, as well as the protectionist policies of the Irish government in this period. All of which forced many distilleries to close their doors, never to re-open.

Thankfully, that wasn’t the end of the line and the 21st century has seen a number of independent distilleries rise from the ashes of a troubled past to create some really exciting new Irish whiskies.

Check out the likes of Teeling and Roe & Co for taster of the new generation of Irish whiskey distillers.

FAQs about when was whiskey invented and more

We’ve had a lot of questions over the years asking about everything from ‘Is whiskey Irish?’ to ‘When was whiskey invented?’.

Where did whiskey originate?

Whiskey originated in Ireland and there’s written records dating from 1405 in the Annals of Clonmacnoise that confirms it.

When was whiskey invented?

While an exact date is unknown (records of this age are almost impossible to come by), whiskey was invented over 1,000 years ago.