A visit to Inishbofin Island in Galway is one of our favourite things to do in Connemara.

A visit to Inishbofin Island is perfect for anyone who wants to get off the grid and explore a quieter side of Ireland that packs a mighty punch.

Below, you’ll discover everything from things to do on Inishbofin Island and where to stay to how to get there and much more.

Some quick need-to-knows before you visit Inishbofin Island 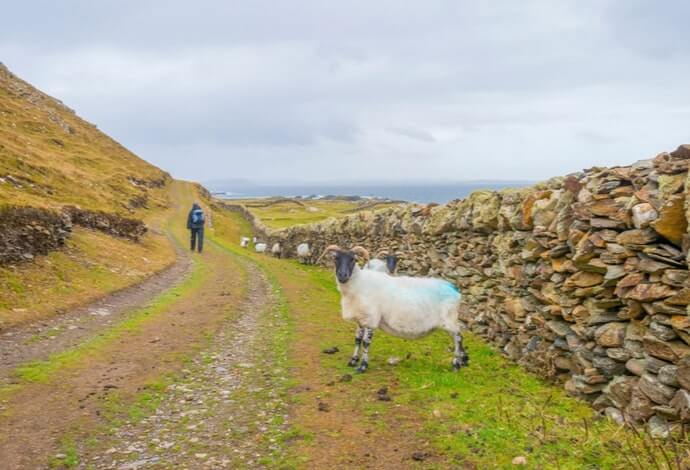 Photo by Marijs on Shutterstock

So, a visit to Inishbofin Island in Galway is fairly straightforward, but there’s a few need-to-knows that’ll make your visit that bit more stress-free.

You’ll find the often-missed Inishbofin Island around 11 km off Galway’s glorious coast. It’s reached from Cleggan Pier and it’s home to many-a-thing to see and do.

The name ‘Inishbofin’ comes from Inis Bó Finne (Island of the White Cow). The name is pronounced ‘in-ish-bof-in’. A fine word that rolls off the tongue.

The population of Inishbofin Island is approx 170 people – before the Great Famine it was around 1500 people. The island’s area size is 5.7km by 4km and is home to five townlands; Fawnmore, Middle Quarter, West Quarter, Cloonamore and Knock.

Yes, you’ll need to take the Inishbofin Ferry to get to the island, but it’s nice and straightforward (prices and info below).

How to get to Inishbofin Island (yep, you need to take the Inishbofin Ferry)

To get to the island, you will need to take the Inishbofin Ferry from Cleggan pier which is 15 minutes from the village of Clifden and 16 minutes from Connemara National Park.

Note: The information below is accurate at the time of writing – make sure to check prices and times before you book.

1. How often it leaves

The daily ferry service is all year round and tickets can be booked online. Here’s the most recent timetable (make sure to check in advance as times may change):

The Inishbofin Ferry takes around 30 minutes to reach the island from the pier at Cleggan and vice versa.

4. How much it costs

Things to do on Inishbofin Island 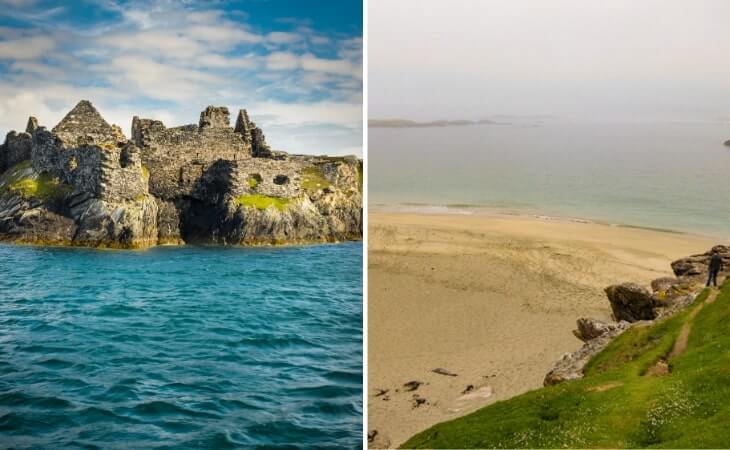 There’s plenty of things to do on Inishbofin Island for those of you debating a visit (especially if you’re outdoorsy!) and a trip to the island really is one of the most over-looked things to do in Galway.

Below, you’ll find some of the islands main attractions, from beautiful beaches and cycle trails to the heritage centre and more. 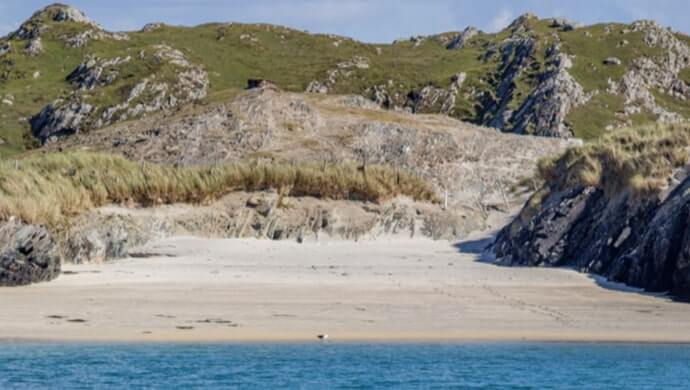 Inishbofin Island has some of the most stunning beaches in Galway, so good that they have even won the Green Coast Award.

On the south eastern shore of Inishbofin is Dumhach Beach, a long beach with crystal clear waters and is particularly great for sunbathing or swimming.

Northwest of the Island is East End Bay, a gorgeous remote beach, a serene spot to just relax uninterrupted. 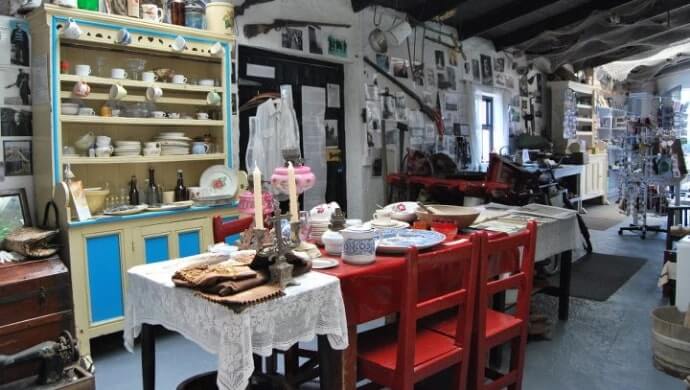 The Inishbofin Island Heritage Museum is located in “the store” close to the old pier and was only set-up back in 1998.

There is also over 200 photos of local people and  you learn about how certain activities pertained to particular families on the island. 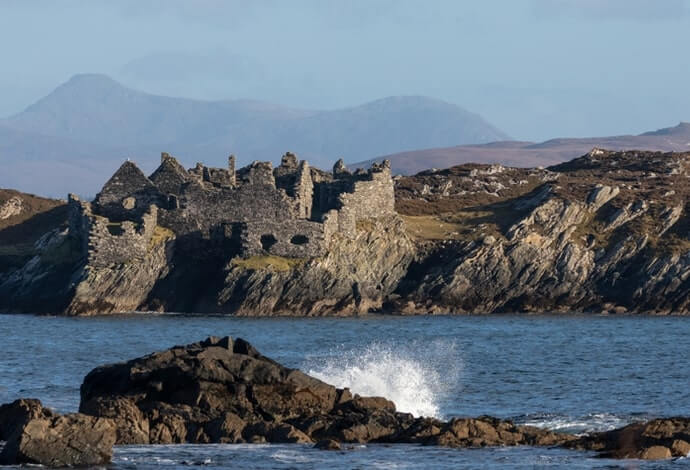 Photo By David OBrien on Shutterstock

Northwest of Inishbofin is the historical ruins of Cromwell’s Barracks is inside a star-shaped fort that lies on a low cliff and is best accessed through a causeway during low tide.

The island itself was once a royalist stronghold in the 16th century, with Cromwell building a barracks to lock up captured Catholic clergy from all over Ireland.

The prisoners would eventually be transported to the West Indies and other remote places as punishment for treason against the crown.

East of the barracks is a medieval harbour, where ships would come in and out during the Jacobite and Cromwellian Wars.

Photo by Marijs on Shutterstock

If you want to explore Inishbofin Island’s stunning scenery then why not take one of the three Looped Walks (or try them all).

The 8km Westquarter Loop starts at the Inishbofin pier and takes around 2hrs to complete. During the route, you can expect amazing views of the Atlantic Coast, sea stags with seals, the Dun More Cliffs and famine road.

The 8km Cloonamore Loop also starts by the pier and takes around 2 hrs.  This route runs along the beautiful East End Beach and St Colman’s 14th Century Chapel.

The 5km Middlequarter Loop starts at the pier and takes around 1.5 hrs to complete. The walk will provide panoramic views of the mountains on Achill Island, the Twelve Bens and Iron and Bronze Age landscapes.

5. Or saddle up and hit the road 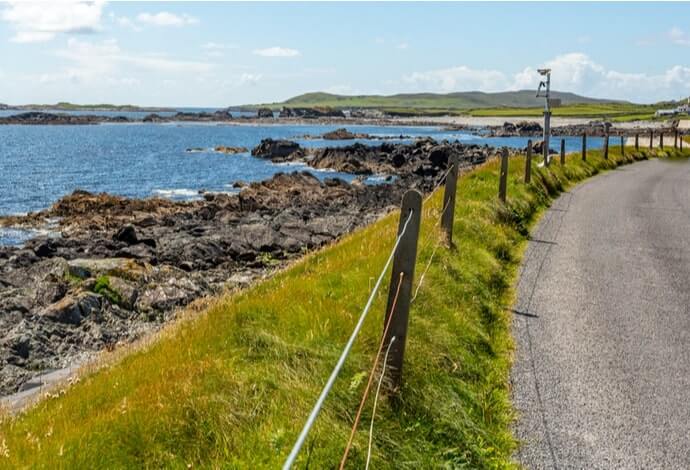 Luckily you won’t have to look far to rent a bike, Kings Bicycle Hire is right next to the pier. It is open from 10am-5pm and costs €15 to rent a bike for the day. Just make sure to wear a helmet (just in case). 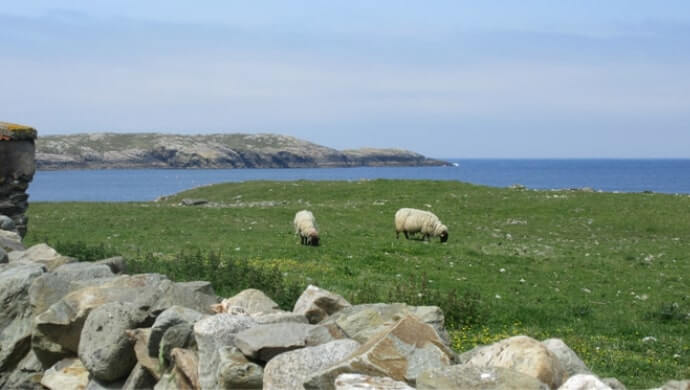 Photo by celticpostcards on Shutterstock

Another of the many popular things to do on Inishbofin is Inishbofin Farm. This traditional sheep farm offers a unique Ecotourism experience where you can learn about sustainability and permaculture.

The location overlooks the harbour and there is over 2.5 hectares of land to explore. You also get to learn about the ins and outs of daily farm life, sample locally produced organic food products and learn about the history of the farm. 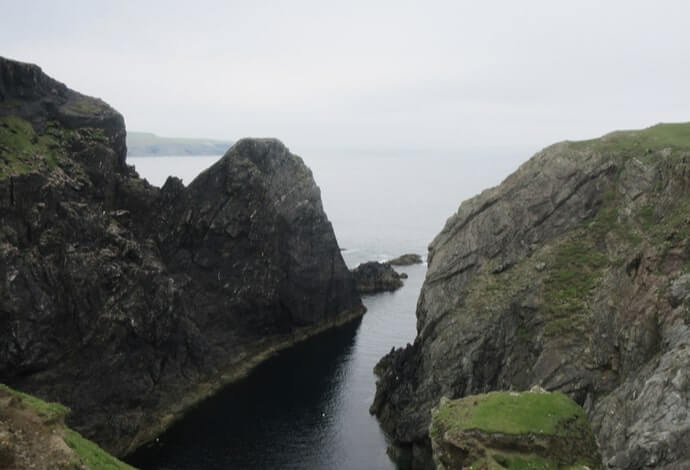 Photo by celticpostcards on Shutterstock

The diverse landscape of the island makes it a perfect home for an array of wildlife and in particular, seals!

There is two spots to see the seal colonies; the first one is near the Stags Rock and the second is close to the island of Inishgort ( which is accessible via boat).

After some seal searching, you could watch a beautiful sunset over the Atlantic at Doonmore Cove, located west of the Island. 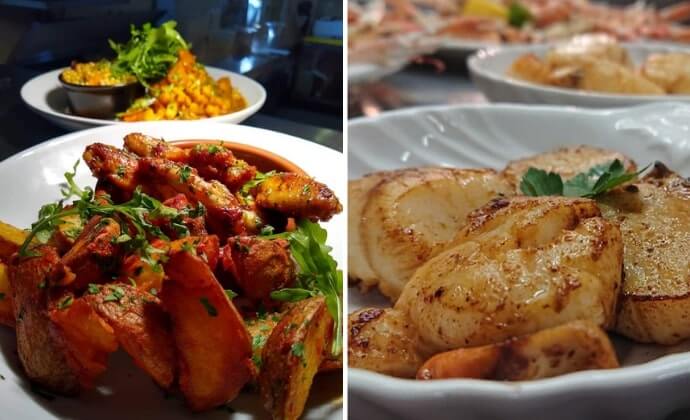 Photos via The Beach, Days Bar and B&B on Facebook

There are several different places to eat on Inishbofin Island, ranging from chilled and casual to slightly more formal (but not fine dining, so don’t worry about dress codes!).

Below, you’ll find a mix of Inishbofin restaurants and cafes where you can grab a bite to eat that’ll make your belly happy.

In Fawnmore you will find this restaurant which offers a very unique experience; firstly it’s a red double decker bus, secondly they serve anything from traditional Irish food to Mexican to Indian.

Food is freshly prepared and locally outsourced, so treat yourself to some fish soup or lamb meatballs. The hearty meals are guaranteed to set you up for the day.

On the east side of the island is this custom-built B&B and restaurant. If you want to sip on some coffee while enjoying lovely views of Connemara then this is the spot.

The restaurant is situated in a great spot that overlooks the sea and the menu caters to even the most fussy eater (so it’s a great place if you have kids).

The fish & chips are a popular order, especially since the Pollack is locally caught and there are a few tasty treats for after (if you have room that is!).

A great little place for food and a bit of banter too. You can expect hearty pub food here such as fish & chips, calamari, chowder and crab sandwiches too!

It’s ideal for families and the friendly staff will go that extra mile to make you dining experience one to remember.

For the meat-lovers out there, you are in for a treat! The restaurant serves a sumptuous pork belly starter and locally produced lamb that’s juicy, tender and full of flavour.

There is also chowder and fish & chips made fresh and heaps of alternative options for the non-meat lovers too. 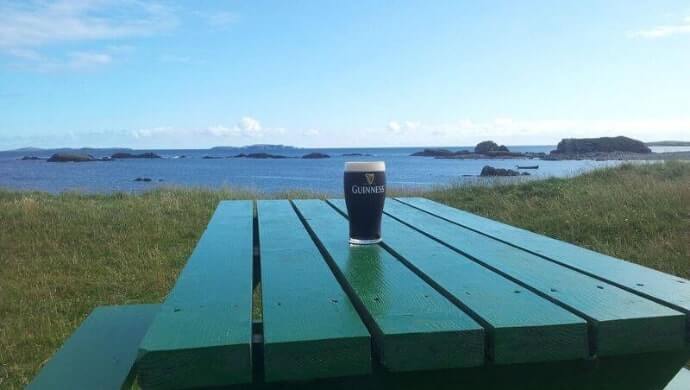 Inishbofin is a small Island with around 170 people living so, understandably, there’s no actual pubs on the island.

However, there’s plenty of places to grab a drink, if you fancy one – just nip into the hotels or restaurants (Murray’s in the Doonmore Hotel is our favourite!). 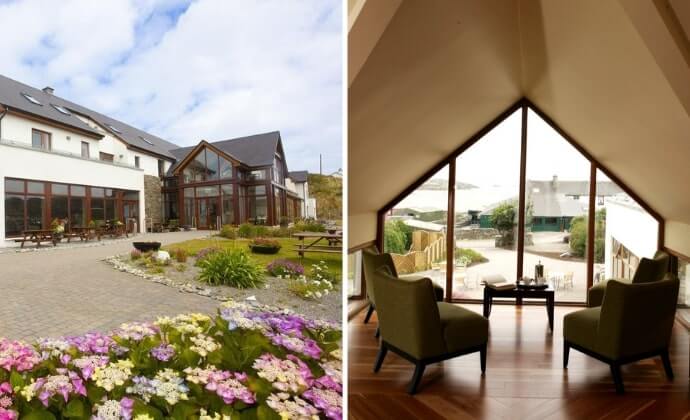 There’s a couple of hotels on Inishbofin Island. Both of the ones mentioned below have solid reviews on Google and make a great base for exploring the island from.

The hotel boasts some amazing views of the Atlantic ocean from the front garden or balcony in your room. Rooms are comfy, not exactly luxurious but this is expected when on such a tiny island. Staff are exceptionally friendly and make sure you feel right at home.

This lovely hotel has been owned and run by the Murray family for three generations. It’s location offers excellent panoramic ocean views (great to wake up to in the morning) and  the restaurant is famous for its seafood and home baked goodies too. They also have a bar which is famous for trad sessions.

Inishbofin Island: What have we missed?

I’m sure that we’ve unintentionally missed out on some brilliant things to do on Inishbofin Island.

If you have a place to recommend, whether it be somewhere to eat or somewhere to stay, let us know in the comments section below.

We’ve had a lot of questions over the years asking about everything from things to do on Inishbofin to where to eat.

Are there many things to do on Inishbofin?

Yes – there are indeed! The island is home to several looped walks, plenty of views towards the Galway coast, a number of cycle trails and plenty of food and accommodation options.

What are the best places to stay on Inishbofin?

Inishbofin House Hotel and Doonmore Hotel Inishbofin are both well worth checking out.

Are there many pubs and restaurants on the island?

Yep! Pub wise, Murray’s in the Doonmore Hotel is our favourite. For food, you’ve a handful of options (scroll up).