The subject of the best beaches in Galway is one that can fire up a fine bit of debate, and for good reason!

County Galway is home to many of the best beaches in Ireland, with a handful of the county’s sandy stretches looking like something from a land far more tropical.

From the incredible Dog’s Bay to the often missed Dumhnach on Inishbofin, there’s an almost endless number of Galway beaches to saunter along.

In the guide below, I’m going to show you my favourite beaches in Galway – if I missed one that you’re particularly fond of, let me know in the comments below!

The best beaches in Galway

The breath-taking county of Galway is home to no end of natural and man-made attractions, from mighty mountains to castles and everything in between.

However, anyone that’s flicked through our guide to the best places to visit in Galway will know that beaches contribute hugely to this county’s beauty, as you’ll see below! 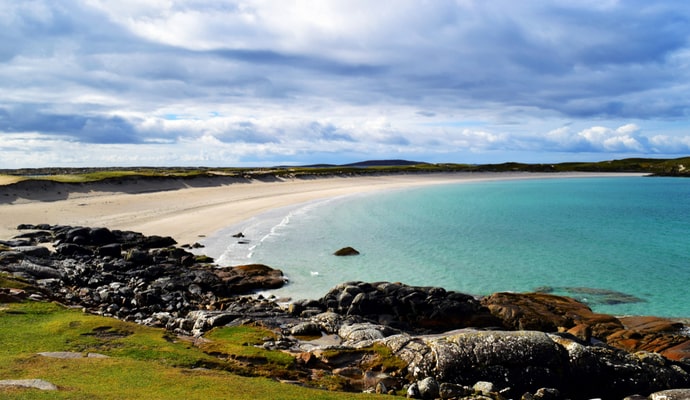 Photo via Silvio Pizzulli on shutterstock.com

First up is the glorious Dog’s Bay Beach, two miles from the lovely little fishing village of Roundstone in Galway.

What everyone notices first is its shape—a spectacular horseshoe—and then its long stretch of white sands that give it that wonderful tropical sparkle.

The colour comes not from traditional limestone but the crushed fragments of seashells. Thanks to its shape and location, the beach is sheltered and safe for swimming, and faces south making it warm and welcoming in the summer months.

Wind and kite surfers love Dog’s Bay Beach too, and the area is famous for its rare ecological, geological and archaeological features. This is one of the best beaches in Galway for a reason.

2. Gurteen Bay (one of many Galway beaches that looks very tropical from above)

Gurteen Bay is Dog’s Bay Beach’s twin, as it lies back-to-back with the latter, the two beaches jutting out into the Atlantic Ocean.

The name comes from the Irish word ‘goirtin’, which means a small field or plot, and like its twin, the beach’s sand is formed from shell fragments (foraminfera).

Up until the 1990s, coastal erosion threatened the future of the beach, but extensive efforts by the local community and the beach restoration committee have helped to drive back the erosion and preserve the beach for future generations.

If you’re in search of beaches in Galway that are brilliant for a ramble and a swim, Gurteen Bay is well worth a visit. 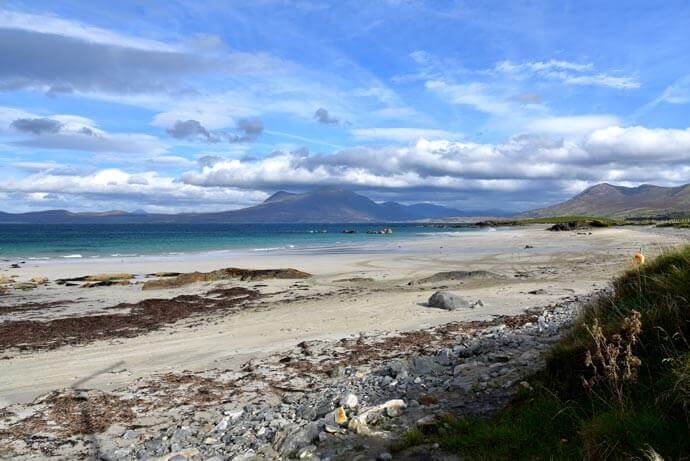 Near Tully Cross, Renvyle Beach with its stunning blue waters is enclosed by the islands of Clare and Inishturk off the coast and flanked by the nearby mountains—Achill, Croagh Patrick and Mweelrea.

As an added bonus, dolphins can often be seen and it’s also a stone’s throw from the village of Clifden, where you will find shops, pubs and restaurants.

This is one of several Galway beaches that can get very busy during the summer months but, if you visit in winter, don’t be surprised if you have it all to yourself! 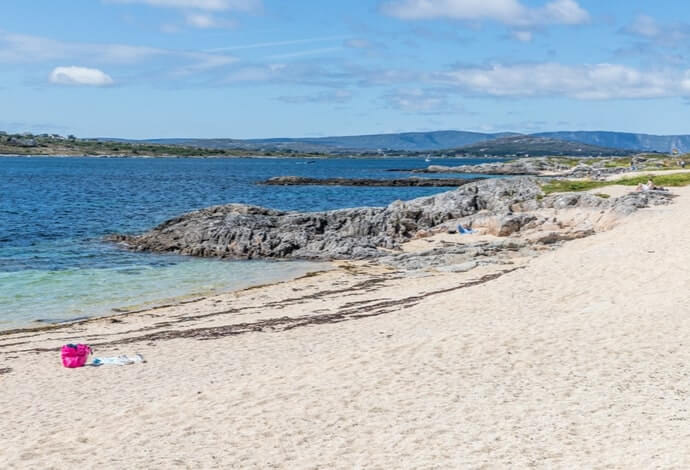 Trá an Dóilín is lauded for its outstanding natural beauty—white coral and blue waters suitable for swimming and snorkelling.

Located just outside the Carraroe Village, lifeguards patrol the beach in the summer season, and it received an International Blue Flag award in 2014 (Blue Flag beach awards denote a beach meets cleanliness and facility standards.)

It has changing rooms and toilet facilities, making it a great place for a day out when the weather is glorious. This of one of the most overlooked beaches in Galway, in our opinion. 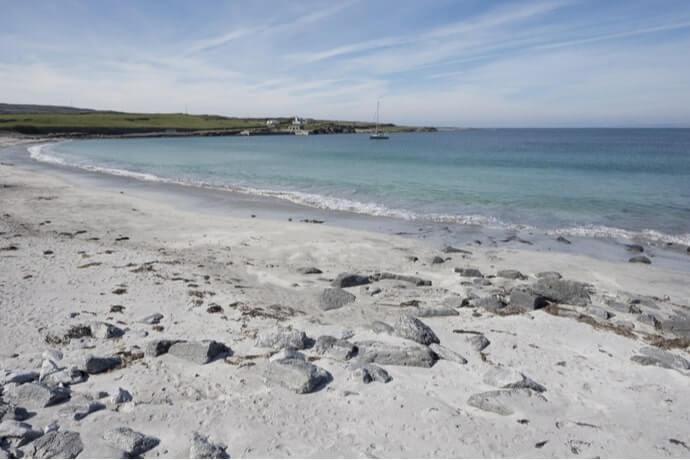 A favourite with bird watchers, Kilmurvey Beach can be found on Inis Mór, the largest of the Aran Islands, and is a sandy beach rich in rare plant species.

Because there are no strong currents, the beach is a great place to go for a ‘dook’ (swim) and a on a sunny day, it is marvelous place to sit, breathe in ozone and eat a picnic!

There are toilet facilities and lifeguards on duty during the summer months. (Noticeboards on the beach will tell you when the lifeguards patrol the area.)

Below, you’ll find some more brilliant beaches in Galway that are well worth rambling along when you visit the county next. 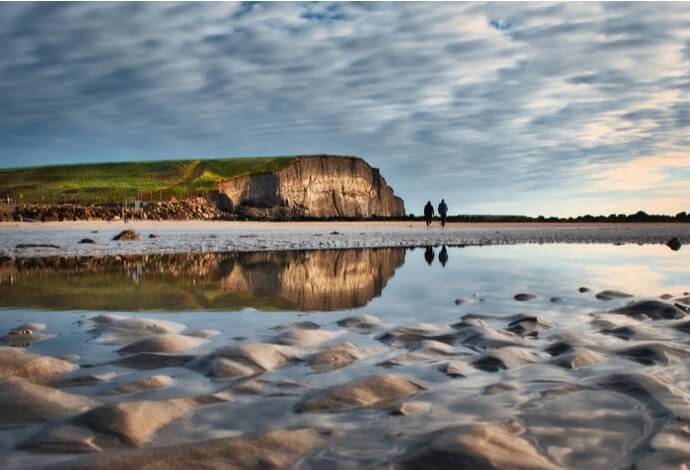 There are plenty of Silver Strand beaches in Ireland, but Galway’s version is a particularly popular, as it’s next to the city.

Frequented by those with young families because the waters are shallow and safe for paddling and/or swimming, though at high tides the beach is mostly covered.

Lifeguards patrol the beach during the summer. As the beach faces directly into the Galway Bay, visitors are rewarded with fine views and the promenade has parking capacity for up to 60 vehicles. 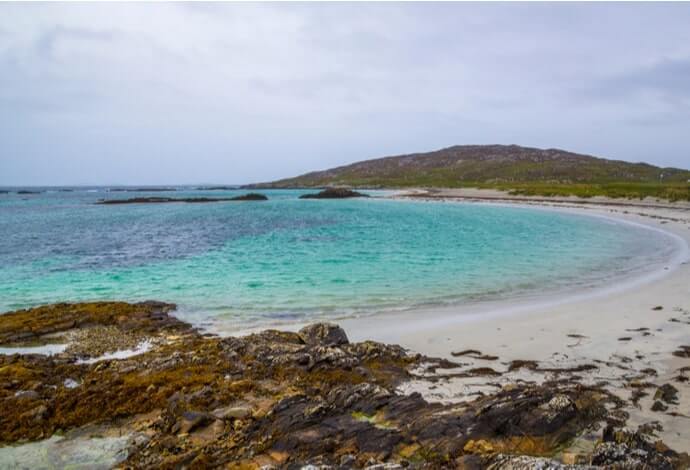 Another stunner of a location, Dumhach Beach is on the south-east shore of Inishbofin Island. This long sandy beach with sand dunes provides enough shelter for plenty of sunbathing on warm sunny days.

Inishbofin Island is your perfect ‘get away from it all’ destination—it lies seven miles off Galway’s coast and is surrounded by wild Atlantic scenery.

There are plenty of walks to head off on (the island is home to one of our favourite walks in Galway) and the island is renowned for its corncrakes.

Dumhach Beach has achieved Green Coast Award for their exceptional water quality and their natural, unspoilt environment. This is another of the many overlooked Galway beaches. 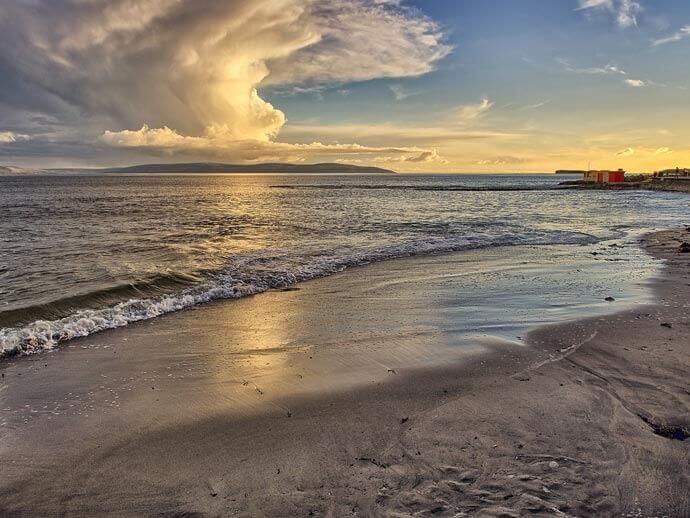 Salthill Beach is a group of small beaches (some are more pebbly than sand) and is popular with swimmers in the summer months.

There’s a large car park (including disabled parking) and there are plenty of great restaurants in Salthill for a post-swim feed.

There’s also plenty of other things to do in Salthill, if you fancy spending some time exploring the area near Salthill Beach. 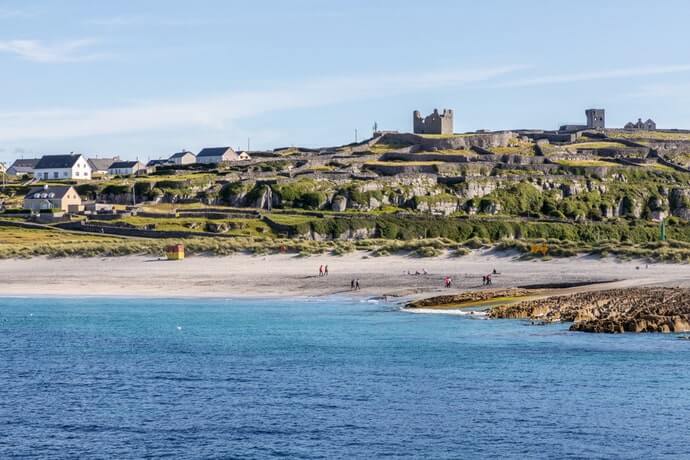 This, the tiniest of the Aran islands off the Galway coast, is about 3kms long and 2kms wide, and has a population of 260.

Trá gCaorach is another of our favourite beaches in Galway as, on a clear day, you’ll be treated to mighty views of the Galway coastline and you may even catch sight of Dusty, the islands dolphin.

We get a lot of questions about what sandy stretches in Galway are worth a visit. Below, I’ve tried to tackle the most frequently asked questions we receive.

If you have a question to ask, or a beach in Donegal to recommend, pop a comment into the comments section below.

What are the best beaches in Galway?

What are the most overlooked Galway beaches?