And, while you’ll find many being served up at tables across the globe, there’s some traditional Christmas food in Ireland that you won’t see elsewhere. 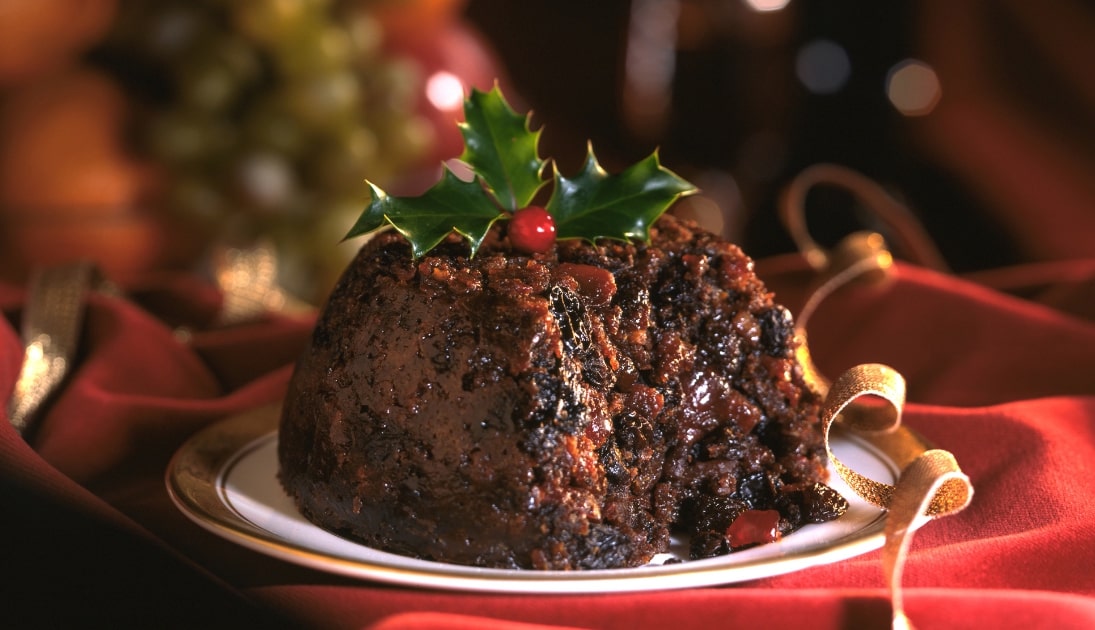 Now, a quick disclaimer before your belly starts rumbling – some of the food and drink below isn’t just munched on in Ireland.

Many of the dishes that fall into the ‘Christmas food in Ireland’ category are eaten in many other countries, like the mince pie! 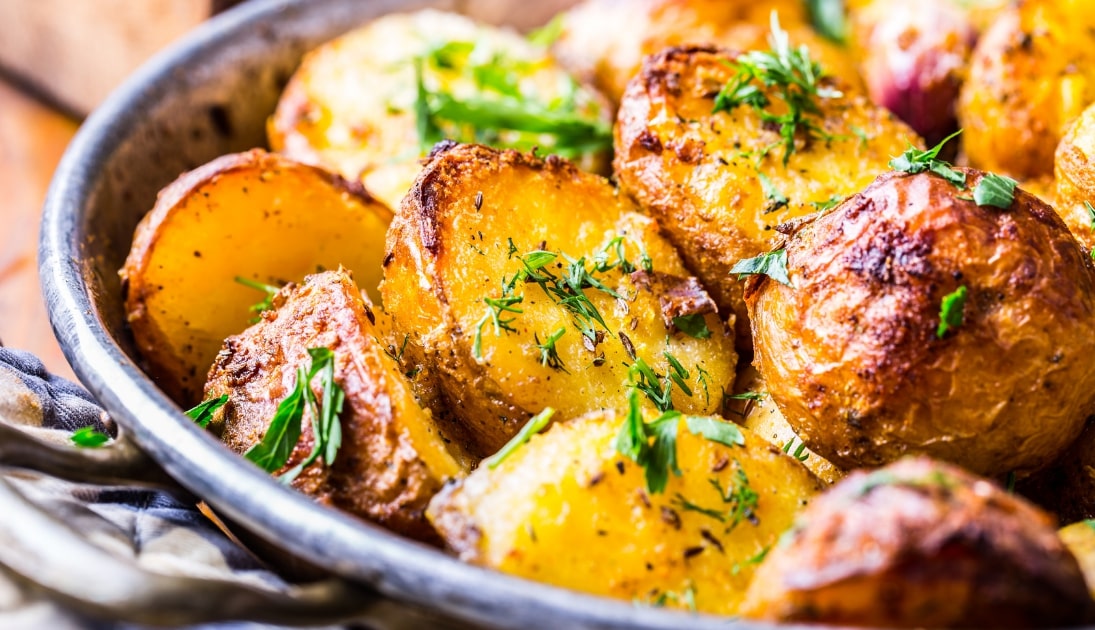 OK, not one single food, but a whole plateful of tastiness! The traditional Irish Christmas dinner is a full-on family tradition when everyone gathers around the dinner table to feast.

Roast turkey is the traditional meat, but many also have boiled ham. The meat is served with gravy (home made or shop bought!).

Some families also have cranberry sauce and/or bread sauce (cream and onions thickened with bread).

The plate is loaded with carrots, turnips, brussels sprouts and mini cabbages. Potatoes are usually served in every way imaginable, from roasted and mashed to tasty potato gratin.

Certain parts of the country also have their own traditional Irish Christmas foods, like spiced beef, goose and roasted duck.

The centre of the table is the hearty iced Christmas cake. This rich dark fruit cake is made up of raisins, currants, sultanas, candied peel and spices bound together with butter, brown sugar, molasses, eggs and spice.

It should be made and cooked in late October then wrapped in foil and occasionally spiked with whiskey or brandy as it mellows and matures.

A week before Christmas, the cake is unwrapped and covered in yellow marzipan and then royal icing. It is decorated with sugar holly, snowmen and other seasonal images and keeps moist for weeks in a tin.

Related read: Check our our guide to 13 unusual, unique and fun facts about Christmas in Ireland

So, we mentioned them previously, but potatoes are the kind of traditional Irish Christmas foods. They were a food staple for families back in the day and when the Potato Famine struck in the late 1840s, many families starved or were forced to emigrate.

Fast forward many years later and potatoes are a key staple in the Irish diet. At Christmas, we eat them roasted, boiled or mashed (or all three at once!).

Left-over potatoes are then cooked in different ways and served with the remaining meats and vegetables on St Stephen’s Day (December 26th).

Champ is popular, made from mashed potato with chopped spring onions or scallions. Add kale or cabbage to the frying pan and you get colcannon.

Fried potatoes and potato cakes may be used up with a cooked Irish breakfast while Potato Bread is a Northern Ireland staple. 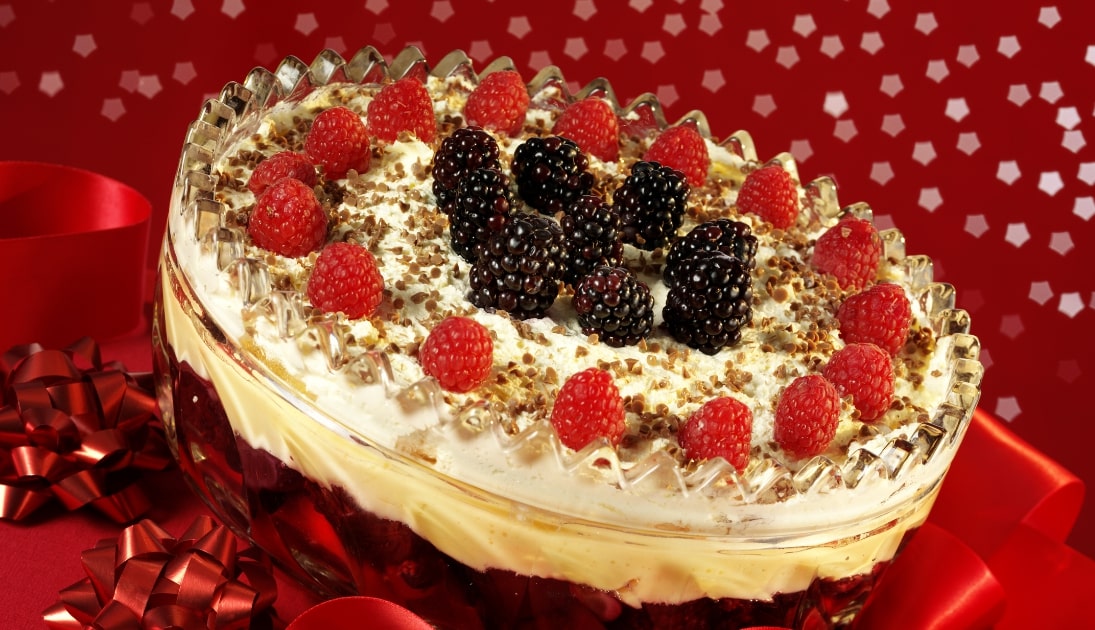 A wobbly strawberry jelly topped with thick yellow custard and whipped cream makes any sherry trifle irresistible. However, it’s the cake layer (swiss roll) soaked in sherry at the bottom that delivers a tasty kick.

This no-bake layered dessert is quick and easy to make and is very versatile. It may include tinned or fresh fruits such as strawberries and peaches and is decorated with whipped cream, sweet glacé cherries and flaked almonds on top.

It’s one traditional Christmas dessert that’s as good as it looks, so leave room for a serving (or two!).

Related read: Check our our guide to 13 old and timeless Christmas traditions in Ireland

Christmas Pudding may have very similar ingredients to the Christmas Cake but it is steamed for hours and then served hot with custard, brandy butter or white sauce laced with alcohol.

It’s traditionally known as “Plum Pudding” as in Victorian times, dried plums or prunes were added to the mixture to eke out the expensive and exotic dried fruit.

To serve the traditional Irish way, brandy is poured over the inverted pudding and set alight. It is brought to the Christmas dinner table in a haze of blue flame, making a grand statement.

Although they’re not what they used to be, the tin of Roses was always a key treat after the traditional Irish Christmas dinner. Cadbury’s is one of the largest and best loved chocolate makers in the UK and Ireland.

Their iconic blue boxes and tubs of Roses milk chocolates have been part of the traditional Christmas scene in Ireland for generations. They were introduced in 1938 and have been a common gift at Christmas ever since.

In a recent survey, the most popular Roses chocolate in Ireland is the Hazel Caramel and Strawberry Dream was the least favourite. 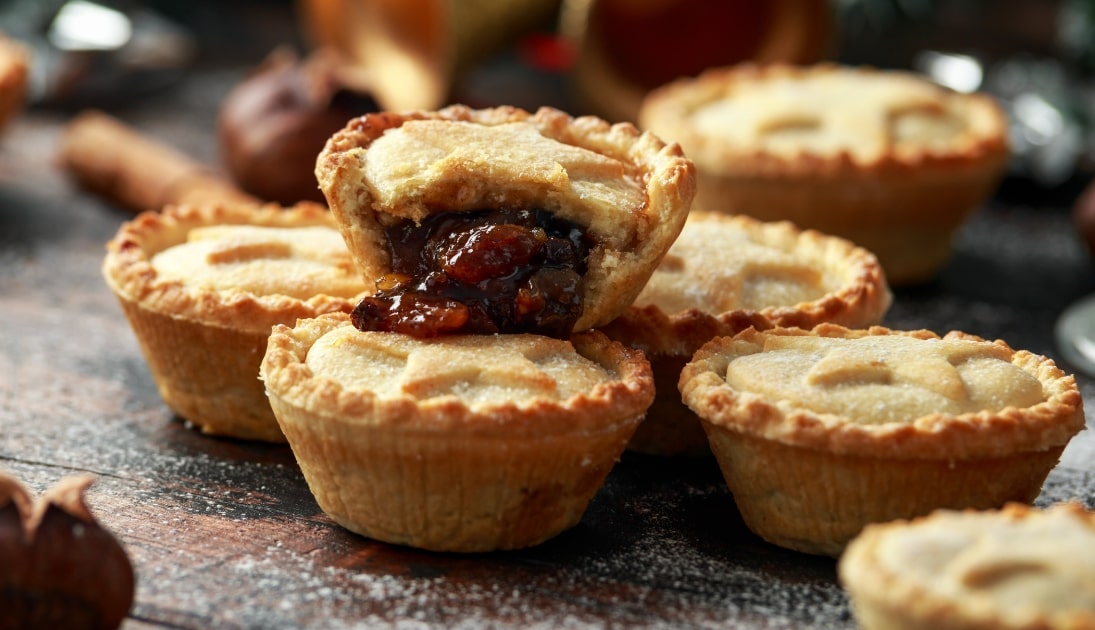 Ooooooh! Mince pies are a real Christmas treat, only available during the Christmas season. These small pastries are filled with “mincemeat” which included diced meat (mutton) during the 15th to 7th centuries.

Nowadays, mince pies are filled with a tasty mix of apple, spices, currants, sugar and suet all cooked together in a slow oven and preserved with a generous portion of brandy or distilled spirits.

The mincemeat can be bought in jars making these sweet Christmas treats quick and easy to prepare and served to guests topped with cream. 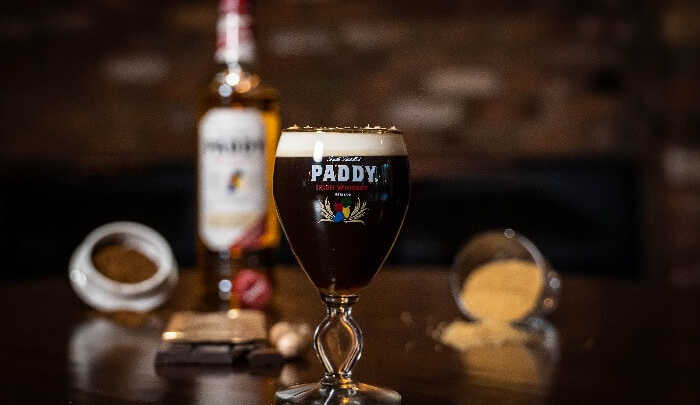 The final flourish to the perfect Christmas meal is an Irish coffee. Brew a nice strong cafetiere of coffee and combine with brown sugar. Add Irish whiskey to taste and top with a squirt of double cream.

The secret to getting the cream to float on top is to pour it over the back of a spoon onto the coffee. Other hot drinks to savour during the Christmas festivities include hot whiskey, mulled wine or hot spiced port.

Other indulgent Christmas drinks include Baileys, a rich liqueur of Irish whiskey, cream and cocoa. Manufactured in Ireland in 1973, it’s now a global top-seller.

We’ve had a lot of questions over the years asking about everything from ‘What foods do they eat on Christmas in Ireland?’ to ‘What are some good festive Irish drinks?’.

What does Ireland eat on Christmas

A traditional Irish Christmas dinner is generally a big meal with a roast turkey acting as the ‘main attraction’. Many people also have roast beef and boiled ham. Roast potatoes, stuffing and a variety of veg are also eaten.

What are some traditional Irish Christmas foods?

A traditional Irish Christmas dinner (and desert) contains everything from roast turkey and Christmas pudding, to mince pies, Christmas cake, sherry trifle and much more.