The magnificent Marsh’s Library is the oldest library in Ireland and a visit here is one of our favourite things to do in Dublin.

Cages, bullet holes and ancient books are just part of the story of the wonderful Marsh’s Library in Dublin!

Ireland’s oldest library dates back to 1707 and is one of the last 18th-century buildings in Ireland still used for its original purpose.

In the guide below, you’ll find info on everything from the history of Marsh’s Library and how to visit to its very unique features.

Some quick need-to-knows about Marsh’s Library in Dublin 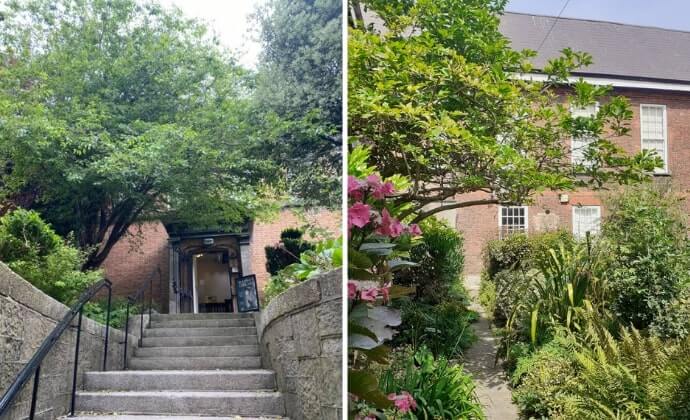 Although a visit to Marsh’s Library is fairly straightforward, there are a few need-to-knows that’ll make your visit that bit more enjoyable.

Marsh’s Library is open Tuesday to Friday from 11am to 5pm, and on Saturday from 10am to 5pm. It’s closed on Sundays and Mondays. Admission is €5 or €3 (students/seniors/concessions). Under 18s are admitted free. Prices may change.

Marsh’s Library still has scars remaining from arguably Dublin’s most dramatic event. The Library came under rifle fire throughout the famous Easter Rising of 1916, but significant damage was inflicted on the morning of Sunday 30 April, when a British army machine-gun sprayed the building with bullets, the holes of which are still visible today.

Perhaps unsurprisingly, a library of this standing attracted some of Dublin’s most famous writers to within its historic walls. Jonathan Swift, Bram Stoker, and James Joyce are just three of the literary luminaries to pass through its doors. There’s even a little spot in the central reading room known as Swift’s Corner, where he used to sit and look out at the cathedral.

The history of Marsh’s Library 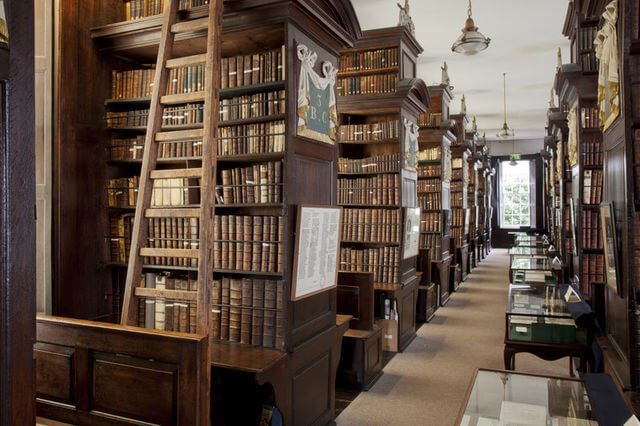 The story of Marsh’s Library begins with the superbly named Archbishop Narcissus Marsh. Marsh was an English clergyman who moved to Dublin in 1679 when he was named Provost of Trinity College and eventually rose to become Archbishop of Dublin in 1694.

Not long after this, he began the process of building Marsh’s Library near St Patrick’s Cathedral. It opened in 1707 (by this time Marsh was the Archbishop of Armagh) and immediately had all of the latest books available at the time, as well as the classics.

And considering all of the changes and events that Dublin has seen over the last 300 years, it’s the only building in the city unchanged from that period that is still used for its original purpose.

Building and safeguarding the collection

The books were donated to the library in the early 18th century by important scholars so they are very rare and valuable.

Almost 10 percent of the collection went missing in the first 60 years. So, they brought in cages! After 1767, if the librarians didn’t like the look of you or if you asked to see some very rare books, you couldn’t sit in the bays and would be locked into one of the cages.

Muriel McCarthy became the first female Keeper in 1989, holding the position until her retirement in 2011.

But the books aren’t the only reason to visit this historic spot. It’s effectively a time machine too!

In fact, things have barely changed inside and they still have the original bookshelves, the original reading desks and all the books are in the same place as they were 300 years ago. Visitors can book a tour in advance or self-guide through the library.

The ghost of Marsh’s Library 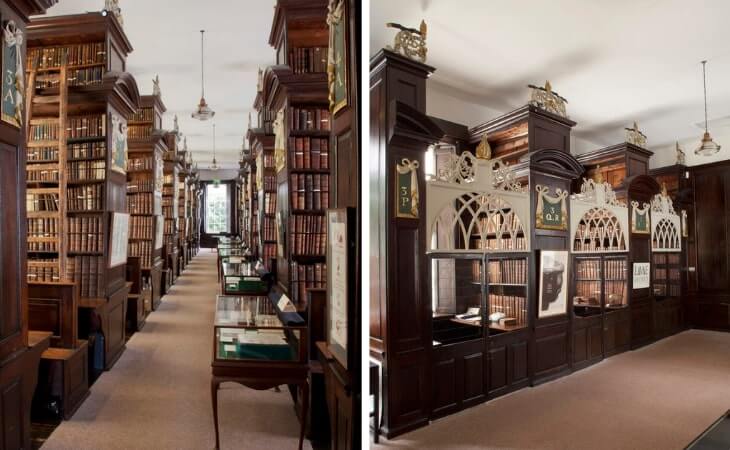 Of course, there’s a ghost! Though I don’t think it’s quite as scary as the library ghost in Ghostbusters, thankfully.

The ghost of an old man can be seen rummaging through the bookcases at midnight and this spectre apparently takes the form of the founder of the library, Archbishop Narcissus Marsh himself.

The story goes that his beloved niece fell in love with a sea captain who Marsh didn’t approve of, so she left him a note explaining her decision and asking for forgiveness. But Archbishop Marsh never found the note, so his apparition returns to the library frequently on an endless search for it.

Things to do near Marsh’s Library

One of the beauties of visiting Marsh’s Library is that it’s a short spin away from some of the best places to visit in Dublin.

Below, you’ll find a handful of things to see and do a stone’s throw from the library (plus places to eat and where to grab a post-adventure pint!).

Adjacent to the library is one of Dublin’s oldest and most iconic sights. Dating back to 1191 (though little from that period remains today), St Patrick’s Cathedral is one of Dublin’s two cathedrals (unusual in itself) alongside Christ Church Cathedral. It would be rude not to visit since you’re so close! 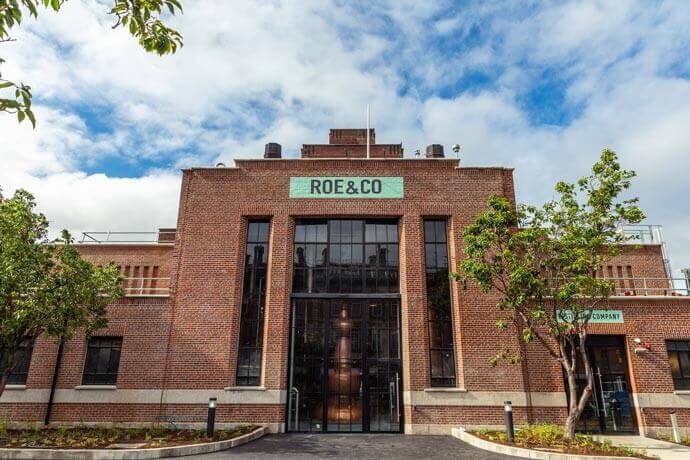 If you want to kick back with a drop after all that reading and history, you’re in luck! Just a short walk from Marsh’s Library are a couple of Dublin’s finest modern whiskey distilleries – Teelings Whiskey Distillery on Newmarket and The Dublin Liberties Distillery on Mill Street. Find out how they work and enjoy a sample at the end (or a few samples!). 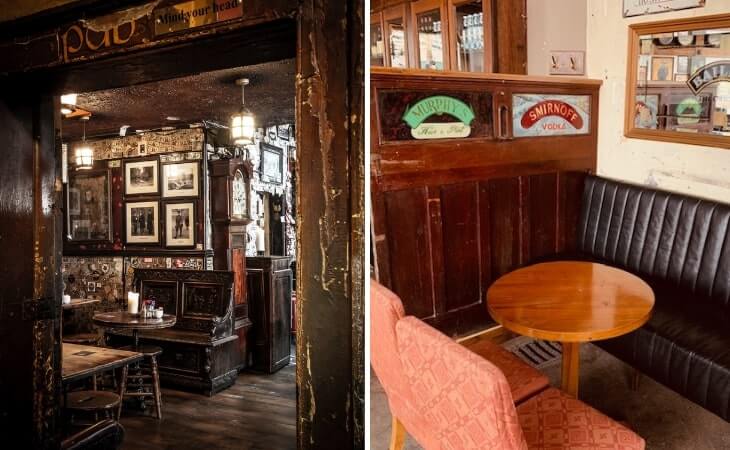 Photo left via the Brazen Head on FB. Photo right via Toners Pub on FB

Continue your historic journey while sitting back with a lovely creamy pint and some fine food! Just a 10-minute walk north from Marsh’s Library is the Brazen Head, by some distance the oldest pub in Dublin with its claims of origin dating to 1198. You’ll find some more of the oldest pubs in Dublin nearby, too.

4. Endless attractions in the city

Thanks to its handy central location, there’s a ton of other spots you can visit when you’re finished at Marsh’s Library. The pleasant bucolic surroundings of St Stephen’s Green are less than 10 minutes away, while there’s more history to be discovered at Dublinia and Christ Church Cathedral just a 5-minute walk north.

We’ve had a lot of questions over the years asking about everything from ‘Where is Marsh’s Library?” (beside St Patrick’s Cathedral) to ‘Where to visit nearby?’.

Is Marsh’s Library worth visiting?

100% yes! This place is home to a wealth of history and it’s a beautiful building to explore. It’s quirky past also makes for interesting reading.

Is Marsh’s Library the oldest library in Ireland?

Yes – it dates back to 1707 and is one of the last 18th-century buildings in Ireland still used for its original purpose.