‘Have you ever visited Newbridge House and Farm?”. “Eh… no. I wouldn’t really be into old houses or farms…”.

This is usually how the conversation goes when you’re chatting to someone who has never been to Newbridge in Donabate before.

However, those in the know will happily tell you that Newbridge Demense is arguably one of the best parks in Dublin.

In the guide below, you’ll find everything from the history of Newbridge Demense and where to grab a coffee to what to do when you arrive and more.

Some quick need-to-knows about Newbridge House and Farm

Although a visit to Newbridge Demense is fairly straightforward, there are a few need-to-knows that’ll make your visit that bit more enjoyable.

Newbridge Farm is an easy 30-minute drive from Dublin City Centre, and only 10 minutes from the airport. Public transport is plentiful with both rail and bus to Donabate village, and there’s a bus stop at the main entrance.

The park is open from dawn to dusk throughout the year (latest opening hours can be found here). Different opening times are in place for the house and farm. Both are closed on Mondays. Guided tours of the house start at 10am all year round but close at 3pm during the Off-season and at 4pm April – September. More info below.

There’s one main car park open all year round a stone’s throw from the house. Then, during the summer, a large overflow car park opens in a field near the playground.

The guided tour of the house well worth doing. There’s an upstairs-downstairs tour and, of course, the Cobbe Cabinet of Curiosities, otherwise known as the Museum. Outside, the Farm Discovery Trail introduces rare and traditional animal species living in perfect harmony with their environment.

About Newbridge House and Farm 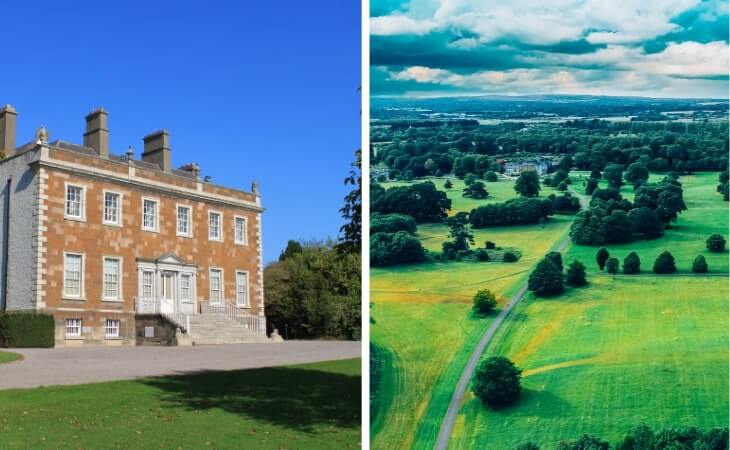 Newbridge House is Ireland’s only intact Georgian mansion. This came about because the Cobbe family sold the grounds and gifted the house to the Irish Government in 1985.

They continue to stay in the house, and all the furnishings and artifacts remain in situ while they live there. The house was built in 1747 for Charles Cobbe, who was then Archbishop of Dublin. It has passed from generation to generation since then.

The next Charles to inherit was a great-grandson of the original. He and his wife took Newbridge to their hearts and ensured their tenants’ and workers’ welfare and living conditions.

His daughter Frances is a bit of a hero of mine – she was a journalist, feminist, philanthropist, and was the first to publicly advocate university education for women in Ireland.

The house has one of only a few family museums in the country and is packed with antiques and memories. The House tour also includes the Farm Discovery Trail. Collect your interactive booklet at the Admissions office and take an active part in the trail as you wander around.

Things to do at Newbridge House and Farm

One of the reasons that a visit to Newbridge Farm is one of the more popular day trips from Dublin City is due to the sheer volume of things there are to do here.

Below, you’ll find everything from coffee and walks to the tour of Newbridge Farm and the guided visit to the house.

1. Grab a coffee from the Coach House and explore the grounds 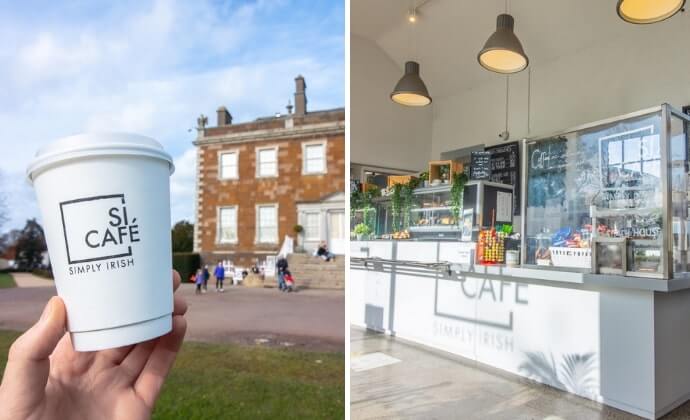 Photos via the Coach House

The extensive parkland around Newbridge Farm is beautifully maintained and it’s an absolute joy to walk around.

Grab a coffee from the Coach House Cafe (next to the house) and head off on your merry way. As you ramble, you’ll encounter:

What would a visit to Newbridge Farm be without visiting the Walled Garden? It dates to around 1765, at the time the house was extended.

The gardens and orchards were moved to an existing walled garden at the back of the house and shielded the workings of a kitchen garden from public view.

The fruits of this garden have fed the Cobbe family for three generations, and anything surplus to requirements was sold at the local market. Two glasshouses built in 1905 have recently been restored, and parts of the garden replanted.

3. Take a tour of the house 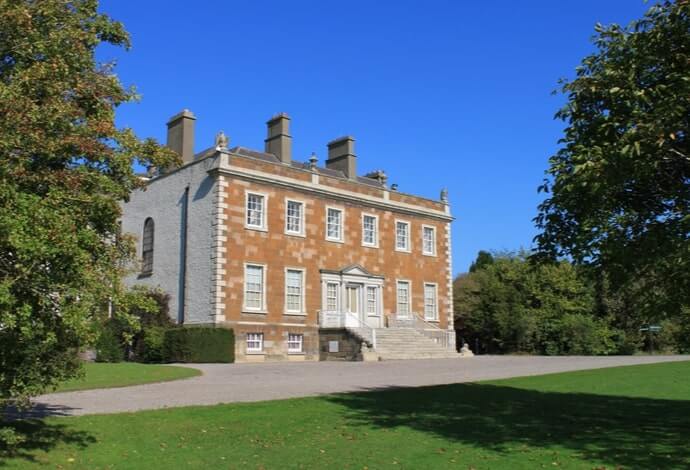 I’ve heard people who don’t usually like guided tours say they’re very glad they took this one. The house is so complete, with almost all its furniture and artifacts still in place, that it feels like you really are wandering around someone’s home. As indeed you are!

The tour guides are excellent. They’re full of knowledge about the house and the generations of Cobbes who have lived here. Best of all, they encourage questions, especially from the youngsters.

The Upstairs-Downstairs experience is an eye-opener for many younger people; the Butler’s Hall, Housekeeper’s Room, and the Cook’s kitchen make for an immersive experience.

The farm at Newbridge House is home to various animal species, all of which are free to roam and live as they’re meant to. Management prides themselves on their farming methods and respect for all their animals.

If you collect your interactive guide booklet at the Admissions Desk, you can solve puzzles to earn a special sticker at the end of the trail. Children are encouraged to play with and feed some of the animals.

For children who are not familiar with farm animals, this place is a treasure trove. Ponies, goats, rabbits, and the more exotic Peacock and Tamworth pig will delight them and give them memories until the next time.

Things to do near Newbridge Farm

One of the beauties of Newbridge House is that it’s a short spin away from many of my favourite things to do in Dublin.

Below, you’ll find a handful of things to see and do a stone’s throw from Newbridge (plus places to eat and where to grab a post-adventure pint!). 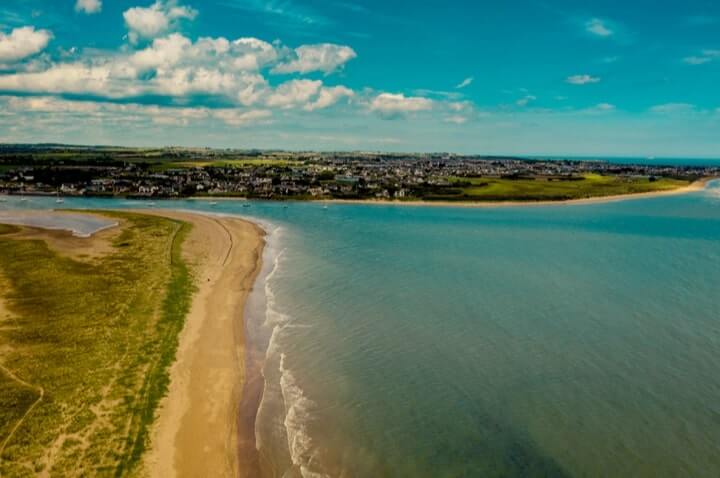 It’s often windy at Donabate Beach, but if you don’t mind that it’s the perfect place for a good walk, being 2.5km long. Even when busy, you have plenty of space, and there’s loads of parking right beside the beach. The views out to Howth Peninsula, Lambay Island, and Malahide Estuary are gorgeous. 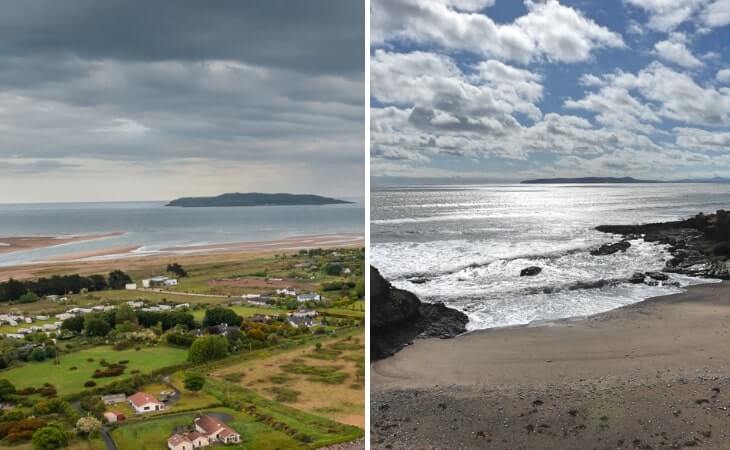 Just one kilometre from Donabate in the small village of Portrane, you’ll find the 2km-long sandy Portrane Beach. Enjoy the sweeping scenic walks around Rogerstown Estuary or venture north of the beach to the National Heritage Area, where you can see colonies of birds that migrate here during the winter. 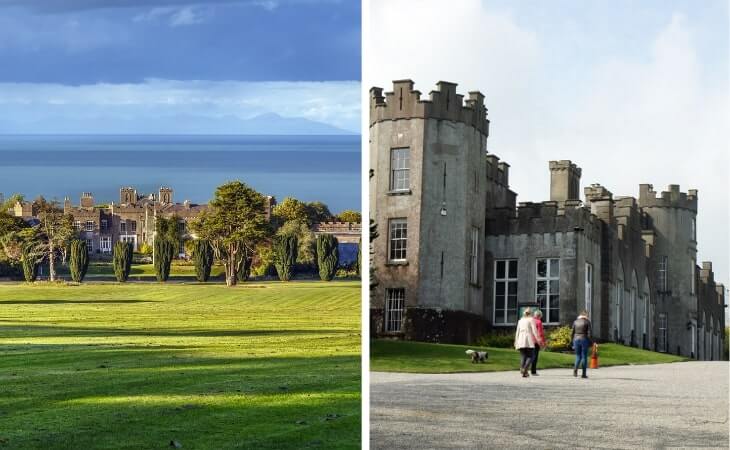 Ardgillan Castle and Demesne overlooks the Irish Sea and has a stunning view of the Mountains of Mourne. Take a tour of the Castle and afterwards visit the rose garden inside the walled gardens. The wooded areas around the Castle provide a sanctuary for many animal and bird species. 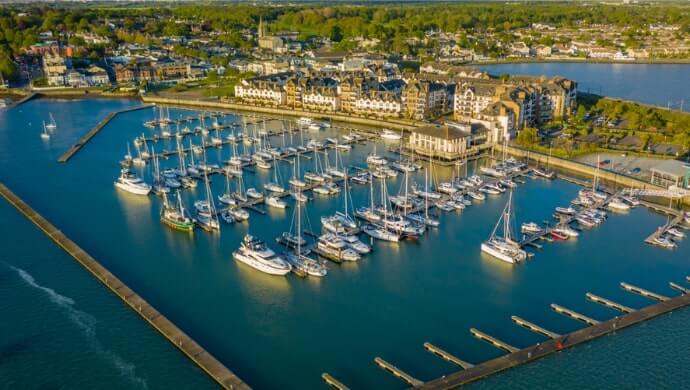 The pretty Malahide Village is well worth a visit. Cobbled streets and traditional shop fronts invite you to explore the many cafés, pubs, and shops while the Marina is just the place for people watching. While you’re there take a trip to the Castle which surrounds the village

Is Newbridge worth visiting?

Yes! You don’t have to go near the house or the farm to enjoy this place – the grounds are home to endless walking trails and it’s beautifully maintained.

What is there to do at Newbridge?