The Old Head Of Kinsale Walk is a handy ramble to head off on.

If you’re staying in Kinsale, AKA, the gourmet capital of Ireland, it’s quite likely you’ve been pigging out (there are some ridiculously good restaurants in Kinsale!).

There’s no shame in it, it’d be rude not to! But if you’re looking to burn off some of those calories, The Old Head of Kinsale Walk is a good shout (although not as scenic as the Scilly Walk).

In the guide below, you’ll find everything you need to know about the Old Head of Kinsale Walk, from where to start it to how long it takes. 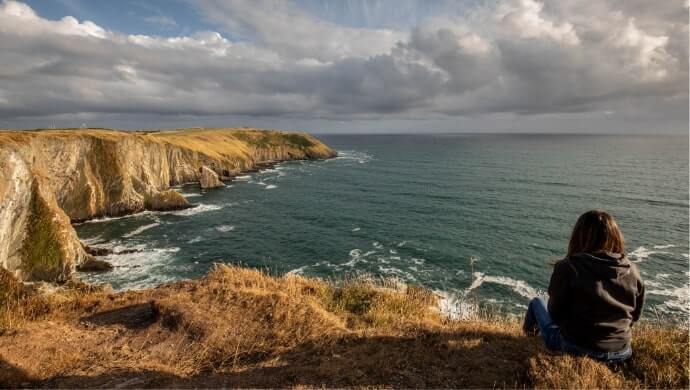 Although the Old Head of Kinsale loop is fairly straightforward, there are a few need-to-knows that’ll make your visit that bit more enjoyable.

Note: pay particular attention to the safety notice below – as should be the case with any coastal/cliff walk you do in Ireland, caution is needed.

1. How long it takes

The Old Head of Kinsale loop covers a distance of around 6 km in total. Depending on how many stops you take for photos, it should take anywhere between 1 and a half to 3 hours or so. The time taken also depends on your start and end point (more on this below).

The most common start point is at the Speckled Door Bar. You can park in their car park, and best of all, drop in for a bite to eat after the walk.

Alternatively, if you fancy a day at one of the best beaches near Kinsale, as well as a walk, you can start from Garylucas/Garretstown Beach (adds 1 to 2 km onto the walk).

If you look at a map of the Old Head of Kinsale walk, you’ll notice that it misses out the last part of the headland. Once upon a time this area was also open to the public. However, it’s since been turned into a golf course.

You can’t reach the furthest end of the Old Head of Kinsale, as it’s now fenced off by the golf course. For that reason, you shouldn’t try to get to the end. Also, please exercise caution while walking near the cliffs.

Also, if you start the walk at Garretstown Beach or Garrylucas, you’ll need to walk along narrow roads with no paths, so make sure to stick close to the side of the road and be vigilant.

The Old Head of Kinsale Loop

The loop is relatively straightforward, mostly following established roads, though you may find yourself wandering from time to time.

For the most part, the headland path takes you along 80 metre high cliffs, with the wild Atlantic pounding below. The road is lined by ancient hedgerows, dry stone walls, farms, villages, and the occasional ruined stone buildings.

I like to start the Old Head of Kinsale loop at Garylucas Beach (one of our favourite beaches near Kinsale) car park as you can have a nosey at the beach, first, if you like, and parking here tends to be easy to get.

From here, as you can see from the map above, it’s very straightforward and it’s pretty much impossible to get lost.

After looping around the Old Head, keep walking until you reach The Speckled Door Bar & Restaurant – this is a great little spot for a post-walk feed.

From here, you’re a short, 15-minute ramble from the car park. You can round off the walk with a stroll on Garrylucas Beach.

Alternatively, you can extend the walk and head on down to Garretstown Beach (an additional 18-minute walk). Just keep in mind the safety note from earlier. 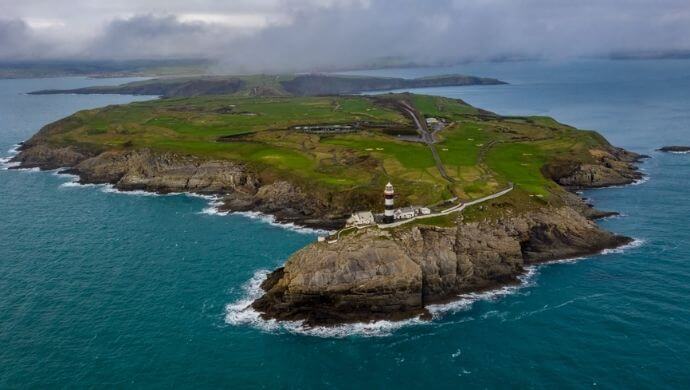 Besides the natural beauty of the headland, there are a few key sights along the Old Head of Kinsale walk, from a castle to the well-known lighthouse.

There are also glorious ocean views from beginning to end (note: make sure to wrap up as it gets very windy here). 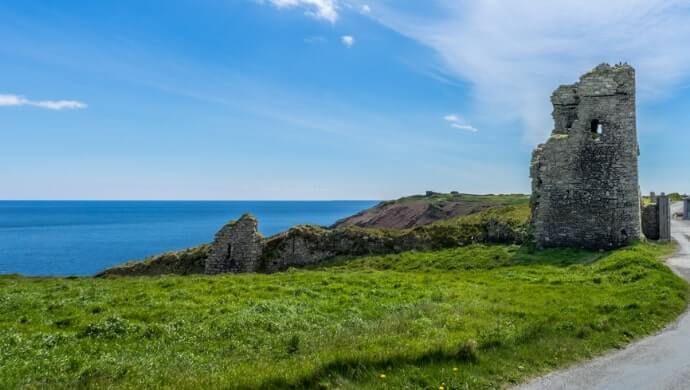 Once you reach the halfway point, you can catch a glimpse of Old Head (also known as Downmacpatrick) Castle.

It’s believed that the castle was first constructed in the 3rd century, and since then has enclosed the farthest reach of the peninsula.

Nowadays, it sadly continues in that role, but instead of keeping invaders out, marks the border of the golf course. As such, you can only view the castle from the outside.

Regardless, it’s worth a look, and you can walk up to it by following the road to the golf course. Consisting of ancient stone walls and towers, it’s a sight to behold and a place to let your imagination run wild. 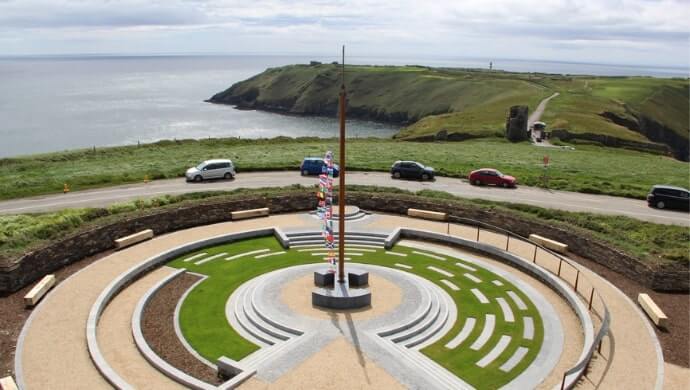 The RMS Lusitania was a British ocean liner in the same class as the Titanic. It was sunk in 1915 by a German U-boat, during the war, around 18 km off the coast of Kinsale Head.

While you won’t see the wreckage, you can learn more about this fascinating story at the Lusitania Museum.

The museum is at the halfway point of the walk, and easily recognized by the old signal tower that soars up into the sky.

Home to interesting exhibits, the museum is well worth a visit. Be sure to head to the top of the tower for spectacular panoramic views, and a nice cup of coffee from the cafe.

The Old Head of Kinsale Lighthouse is sadly difficult to visit these days. Located at the very tip of the headland, access is blocked by the private golf course.

So, unless you’re a member of the golf course, it’s not easy to walk to it. You can try to blag your way past the guards — apparently the golf course restaurant is open to the public, so if you’re heading there for lunch they’ll have to let you in.

You didn’t hear it from us! Be advised, if you do make it to the lighthouse, it’s an additional 2 km each way.

Things to do after the Old Head of Kinsale Walk

One of the beauties of the Old Head Of Kinsale Walk is that it’s a short spin away from a a number of worthwhile things to do in Kinsale.

Below, you’ll find a handful of things to see and do a stone’s throw from the Old Head (plus places to eat and where to grab a post-adventure pint!). 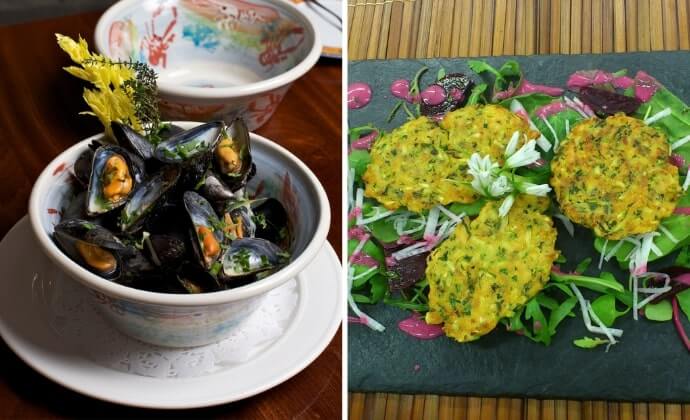 They don’t call Kinsale the gourmet capital of Ireland for nothing! The town is home to a wealth of top-class restaurants, each offering delectable dishes.

From fresh, locally caught seafood restaurants, to Michelin Starred bistros, and buzzing cafes to vegetarian joints, there’s something for every appetite.

Still got some energy left? The Scilly walk is another decent trek, just outside of Kinsale. It’s not overly strenuous, and takes in some lovely views of the harbour.

If you’re lucky, you might even see seals. The walk also passes some great pubs and restaurants, so you can restore your strength along the way!

Following the Scilly Walk will eventually take you to Charles Fort if you’re up for it. It’s another site that’s a must if you’re in Kinsale. 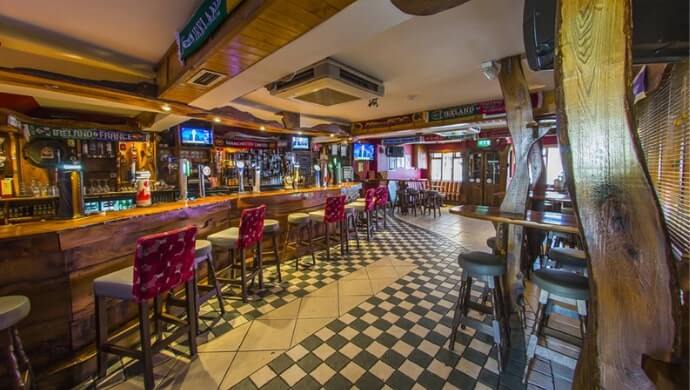 Tired legs demand a cosy seat, preferably by the fireplace, with a satisfying pint in hand. While the town is best known for its food scene, there are also plenty of great pubs in Kinsale.

If you’re looking for traditional live music and a lively atmosphere, there are plenty of places worth wandering into, many with daily music sessions.

Alternatively, for pub grub there’s no shortage of pubs offering a good feed either. Wherever you go, good craic and an amazing atmosphere is guaranteed.

FAQs about the Old Head Of Kinsale loop

We’ve had a lot of questions over the years asking about everything from how long the Old Head Of Kinsale Walk takes to where to start it.

How long does the Old Head Of Kinsale Walk take?

It takes between 1.5 and 3 hours, depending on where you start the walk from and the walk you walk at. To be safe, allow at least 2 hours.

Where do you start the Old Head Of Kinsale loop?

You can start at either of the beaches mentioned above or at The Speckled Door Bar & Restaurant. Personally, I like to start it at the Garrylucas Beach car park.

Is the walk worth doing?

Although hampered by the private gold course that no occupies the end of the Old Head, the walk is still worth doing if you’re in the area and want to stretch your legs.