A visit to the Saltee Islands is one of the more unique things to do in Wexford.

Reached by ferry via Kilmore Quay, the Saltee Islands are a short, 20-minute spin from the mainland and they’re well worth a visit.

Home to glorious coastline, a puffin colony and many a seal, shipwreck and unique feature, the Saltees are an excellent day-tip destination.

In the guide below, you’ll find everything you need to know, from the Saltee Islands ferry to when to see the puffins.

Some quick need-to-knows about the Saltee Islands 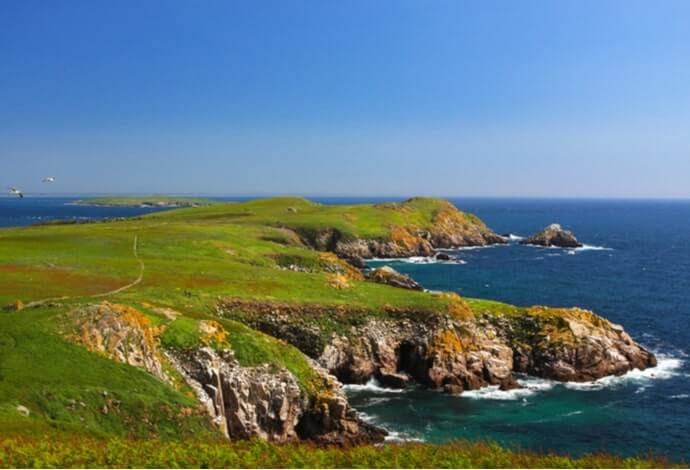 Although a visit to Saltees is fairly straightforward, there are a few need-to-knows that’ll make your visit that bit more enjoyable.

The Saltee Islands are located 5 km (3 miles) off the coast of Kilmore Quay in County Wexford.

The Saltee Islands ferry departs from the harbour at Kilmore Quay every day between April 1st and September 30th. The crossing takes just 20 minutes and it’s advisable to book a ticket in advance (info below).

The Saltee Islands puffins return to breed every year between April and July. Here, the puffins create their nests and lay one single egg which both parents will incubate for about 5 to 6 weeks. After a chick is born, its parents will take turns feeding it for an extra 8 weeks to then leave (more info below).

Unfortunately, a trip to the Saltee Islands is not advisable for people with limited mobility as you will need to walk on slippery and uneven surfaces when getting on/off the ferry. It’s also advisable to bring an extra pair of shoes with you as yours will likely get wet. There’s plenty of things to do in Kilmore Quay if a visit here won’t suit.

About the Saltee Islands 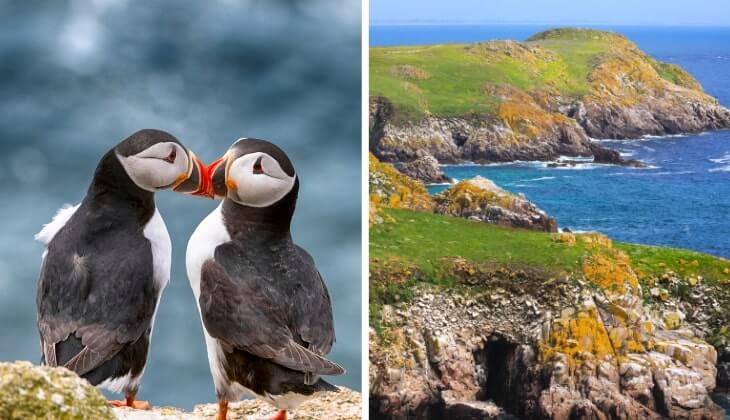 The Saltee Islands have been inhabited since the Stone Age when people first settled here.

There is archaeological evidence of people living on this site between 3,500 BC and 2,000 BC (religious settlements were found on the islands). In later years, the Saltee Islands played host to Normans, Vikings, Early Christian hermits and Medieval monks.

Between the 14th and 17th century, they were used as a base for smugglers and buccaneers. In December 1943, both islands became the private property of the Neale family who, since then, has welcomed scholars and tourists alike.

Members of the Neale family are currently the only inhabitants of the islands.

Both islands have been granted the status of Special Protection Area to protect the lives of the many species of birds that come here every year. In fact, these islands are home to colonies of gannets, shags, kittiwakes, fulmars, puffins, razorbills, guillemots and even grey seals!

In addition, together with the mainland coastline, east of Kilmore Quay, the Saltee Islands have also been designated a Special Area of Conservation. Here you will find breathtaking landscapes such as colorful coral reefs, sea caves and vegetated sea cliffs.

These islands are also home to large shallow inlets and bays as well as mud and sand flats. 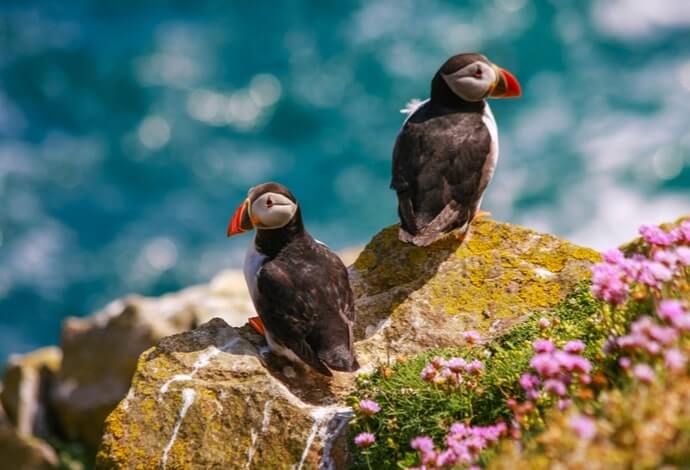 The Saltee Islands ferry is nice and straightforward, once you’re organised and well packed for your visit. We’d recommend packing for all weathers during your visit, as the island is completely exposed to the elements.

It’s also worth packing water, snacks and a spare pair of shoes, as you’ll likely get wet when getting on/off the ferry. Here’s some handy info:

Where it leaves from

Ferries depart from the top of the harbour in Kilmore Quay, next to the boat launching slip. Look out for a yellow gate with a sign reading ‘Saltee Islands ferry’ (you’ll be given all of this info when you book your ticket).

The trip to the Great Saltee Island will take approximately 20 minutes. You’ll have around a 3-hour window on the island to explore before you have to get on your return ferry.

How much it costs

A return ticket will cost you €30.00 for adults and €15.00 for children under 12 years old (you can book your Saltee Islands ferry ticket here).

The ferries usually depart at 10 am, 11 am, 12 am and 1 pm and do not operate during the winter months. Crossings are subject to weather conditions and seasonality so always make sure to check whether ferries are running before your trip.

Things to do on the Saltee Islands

There’s plenty to see and do on the Saltee Islands, from long walks around the perimeter of the island to wildlife and interesting sites.

Here’s a handful of things to do – again, please do make sure to pack and dress accordingly.

1. Walk along the coast

Once you ‘land’ on the Great Saltee Island, you will find a walking trail (it may be hidden beneath the shrubbery). This path can be completed in about one hour and it will take you to the most popular sites on the island.

You will see everything from shipwrecks and a throne to a flag-staff and an obelisk – a tribute to the first owner of the island.

2. And keep an eye out for birds, seals and shipwrecks

The Saltee Islands are one of the most popular bird sanctuaries in Ireland and up to 220 species of birds have been recorded here. Three main groups of birds can be found on the islands, migrant birds, resident land birds and breeding seabirds. T

he Saltee Islands are also home to one of the few colonies of grey seals in eastern Ireland and every year 120 seals gather here to give birth to 20 pups.

A number of shipping casualties also occurred here during the two World Wars and many shipwrecks can still be seen to this day.

3. See one of the islands more unique features

On the Great Saltee Island, you will also find a throne, a flag-staff and an obelisk. These three items were brought here during the 20th century by Michael the First who, in 1920, at the age of 10, made a vow to his mother that one day he would have become Prince of the Saltee Islands.

In 1943 he officially became the owner of the islands and between 1945 and 1950 he planted over 34,000 trees. The throne was dedicated to Michael’s mother and bears an inscription in her honour.

FAQs about visiting the Saltee Islands

Are the Saltee Islands worth visiting?

Yes. This place is still a bit of a hidden gem and it’s well worth exploring, especially when the weather’s fine.

How long does the Saltee Islands ferry take?

The Saltee Islands ferry is a short, 20-minute journey across the water. You can board it from the town of Kilmore Quay.

When is the best time to see puffins on the Saltee Islands?

The puffin colony retuns to the Saltees for a 4 month period between April and July.

Can u bring a dog on a lead to the saltees

Why cant u b like ur dad put on ahelecopter 4 disabile people.love u cus