The Crown Bar in Belfast (the Crown Liquor Saloon) is arguably one of the city’s most unique pubs.

Dating back to 1826, the Crown Bar was once regarded as one of the mightiest Victorian gin palaces in the British Isles.

And while you’ll hear some refer to it as a bit of a tourist trap, its gorgeous interior (and it’s 10 snugs!) make it one of several touristy pubs in Belfast well worth nipping into.

In the guide below, you’ll find info on everything from the history of the The Crown Liquor Saloon to what to expect from a visit.

Some quick need-to-knows about the Crown Bar in Belfast

Although a visit to the Crown Bar in Belfast is fairly straightforward, there are a few need-to-knows that’ll make your visit that bit more enjoyable.

2. Where it all began

Dating back to 1826, the Crown Liquor Saloon in Belfast was opened by Felix O’Hanlon as The Railway Tavern, and was then later bought by a bloke named Michael Flanagan, who renamed and renovated the pub in 1885.

The elaborate tiling, beautiful stained glass and woodwork were a creation of an Italian craftsman whom Flanagan, one of the original owners, persuaded to work on the pub after hours. Much of the original interior of the Crown Bar remains beautifully preserved.

The history of the Crown Liquor Saloon in Belfast

Formerly known as ‘The Liquor Saloon in Great Victoria Street’, this pub was once regarded as one of the mightiest Victorian gin palaces in the British Isles.

Dating back to 1826, The Crown Bar in Belfast started off its life as The Railway Tavern, when it was opened by Felix O’Hanlon.

Many years later, in 1885, it was bought by a Michael Flanagan, who’s son Patrick took it over, renovated the building and renamed the pub.

These features are all credited to a group of Italian craftsmen that were brought in by Flanagan to work on The Crown Bar ‘after hours’.

These talented worked were in Ireland at the time working on the numerous churches that were being constructed in Belfast during this time.

One of the finest Victorian gin palaces of its time

It was the beautiful interior of the Crown Bar that earned it its reputation as one of the finest Victorian gin palaces in the British Isles.

For those of you planning a visit, The Crown has ten cosy snugs, which were built to accommodate some of the pub’s more reserved locals during the Victorian period.

To this day the snugs still feature the original gun metal plates for striking matches and an old antique alarm bell system for alerting staff.

The Crown pub in later years

Many years later, in 1978, the Crown Bar in Belfast was purchased by Sir John Betjeman and given a £400,000 renovation.

This investment saw the pub restored to its former Victorian glory. Then, in 2007, further restoration costing £500,000 was conduced by the National Trust. 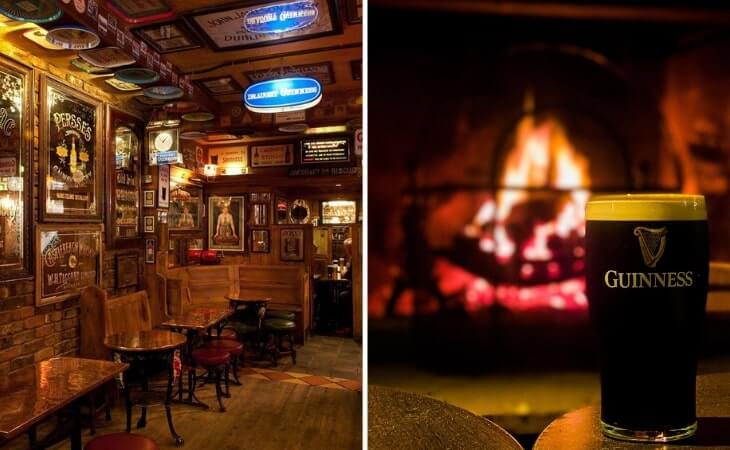 Photo left via the Duke of York Pub Belfast. Photo right via the Points on Facebook

There’s plenty of other great spots for a pint in Belfast… although few of them look like a Harry Potter filming location, like the Crown Bar. Here are some guides to nip into:

FAQs about the Crown pub in Belfast

We’ve had a lot of questions over the years asking about everything from when did the Crown Liquor Saloon open to is it a tourist trap.

When was the Crown Bar built?

The Crown Bar in Belfast was built in 1826. It has been renovated many times over the years, but managed to retain its old-world charm.

Is the Crown Liquor Saloon a tourist trap?

You’ll hear people say it is often enough, but it’s a unique pub with a gorgeous interior. It’s worth visiting for just the one, anyway.