‘The Luck of the Irish’ is a phrase that I’ve heard thrown around an awful lot over the years but, to be honest, up until a few years ago, I had no idea what it meant.

It wasn’t until back in 2017 when, while sitting in a pub in Kinsale, that I overheard an aul lad tell the story of its origin to an American couple (one of whom had it written on their t-shirt).

In the guide below, you’ll discover the meaning behind ‘the Luck of the Irish’, where the phrase came from and what it actually means (Spoiler: it absolutely isn’t Irish slang!).

The Origin of ‘the Luck of the Irish’ 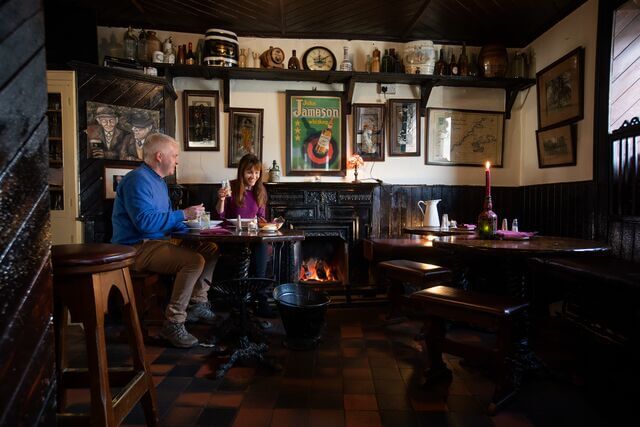 Now, if you’ve come here looking for tales of leprechauns and pots of gold, you’re going to be very disappointed, I’m afraid.

The Irish mythological creatures known as Leprachauns couldn’t be further from the story behind the phrase.

The term ‘the Luck of the Irish’ is believed to have originated in America at some time during the 19th century and it’s thought to have been used in a derogatory manner at first.

Our story all begins at a time when America was experiencing what is known as its ‘gold rush years’. A number of major gold rushes took place throughout the 19th century across the world, but most notably in Australia, New Zealand, South Africa and the US.

When poor immigrants from Ireland started to make their way across to America at a time when the Great Famine was ravaging our little island, many took up jobs in the bustling mining industry.

Now, put yourselves in the shoes of the Irish that would have arrived in the US at this point in time – they were leaving an Ireland that was crippled with food shortages, starvation, disease and death.

Many that travelled to the US were doing so for one of two reasons:

Those that worked in the mines were quickly recognised as hard workers and diligent labourers that often delivered better results than their American colleagues.

The Discovery of Fortunes Led to the Creation of the Term

The story goes (according to the aul lad in Kinsale, anyway!) that the Irish had a knack of digging up mining fortunes during the gold rush. Was this luck?!

Or was it pure determination to succeed?! After all, these people had just left a land rife with mass poverty and starvation and were surely just doing everything in their power to find, keep and excel at a job.

The chances are that they had people back in Ireland who’s lives relied on them. We’re getting sidetracked – let’s get back to where the term ‘the Luck of the Irish’ came from.

The miners that were working alongside Irish colleagues put their ability to source these mining fortunes down to sheer luck, rather than perseverance and diligence.

The term ‘the Luck of the Irish’ is said to have followed successful miners from Ireland for the duration of the gold rush in America.

The History of the Expression Potentially Verified

After the aul lad had finished telling the couple the story, one of them whipped out their phone and started to do a bit of Googling. He mentioned an article that cited a book by a Professor of History named Edward T. O’Donnell.

Apparently (I’ve verified this since, of course!), O’Donnell wrote a book titled ‘1001 Things Everyone Should Know About Irish American History’.

In the book O’Donnell backs up the story mentioned above, saying ‘During the gold and silver rush years in the second half of the 19th century, a number of the most famous and successful miners were of Irish and Irish American birth’.

Modern Use of ‘the Luck of the Irish’

Although many Irish American websites and publications state that this term is now only used in positive situations, I have to disagree – the term ‘the Luck of the Irish’ isn’t, in my opinion, any way positive, nor is it a compliment.

It tends to be used by everyone other than Irish people to describe Irish people experiencing some form of ‘luck’, often in sporting situations.

For example, when an Irish footballer playing in the UK’s Premier League scores a goal from a tricky position. Luck… yes, nothing to do with skill, hard work, or superior performance…

Fancy discovering more Irish sayings and phrases? Hop into our guide to 101 Irish slang phrases and their meanings.

Hello… I’ve read that the term is actually an oxymoron… meaning Bum F..k Luck. As in , if it wasn’t for bad luck, they Irish wouldn’t have any luck at all. That makes more sense to me. Funny, I’m an American ( now a dual Irish citizen) who never heard of the Irish gold mining connection…, of course, we are a nation sadly lacking in knowledge of history, geography, mathematics… and it’s only getting worse.

Thank ya, Keith! These things are good to know. I have to put together a Trivia game for Fridays, so I am going to check out more of your info, for the game. Blessings!

My father always told me that “Luck of the Irish” should be taken in the same spirit as “Welcome to New York!” - that is, with a healthy dose of cynical sarcasm.

Hi, I really enjoyed reading all your entries. I'm writing about an Irish character from Cork. If you know of any more current phrases a young woman might say, I'd love to hear them. Keep up the good work xx