We receive several questions about the Irish flag every single week. In the guide below, you’ll discover everything you need to know about it.

One of the most iconic symbols of Ireland, you’re probably already aware that the Republic of Ireland is represented by a national flag which consists of three bands of green, white and orange.

We look at what those colours represent and how the flag came into being in this guide. The Irish flag also has interesting connections with the French tricolour – read on if you’re curious to know more!

About the Irish Flag 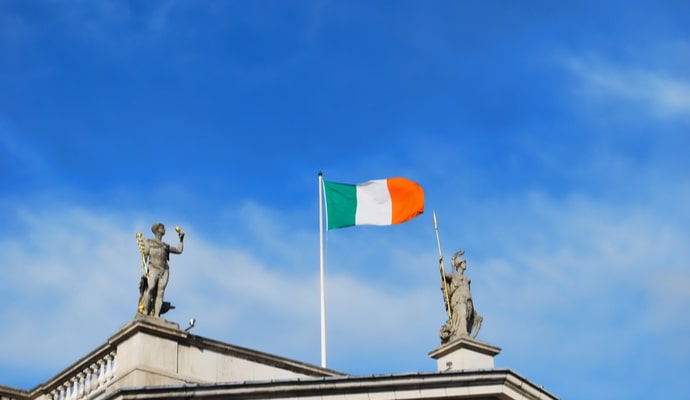 Photo via David Renton on shuttertstock.com

The official Republic of Ireland flag is known as the tricolour, and it doesn’t take a genius to spot why. The rectangular flag is made up of three broad vertical stripes in green, white and orange.

The flag is always flown with the green stripe closest to the flagpole. Each band must be exactly the same size and the flag should be twice as wide as it is high. Of course, the three colours on the Irish flag are symbolic.

What the Irish flag colours mean

Arguably the most common question we receive about Ireland flag revolves around what do the colours of the Irish flag mean and what do they symbolise.

Green represents the Roman Catholics (you’ll have noted all that emerald or shamrock green around on St Patrick’s Day!) and orange represents the Irish Protestants.

They are commonly known as ‘Orangemen’ (particularly over the border in Northern Ireland) dating back to their loyalty to the protestant William of Orange (King William III of England).

The white stripe in the middle represents the hoped-for peace and union between the two groups (at the time when the Irish tricolour was first flown, the country was deeply divided between Catholics and Protestants).

History of the Irish Flag 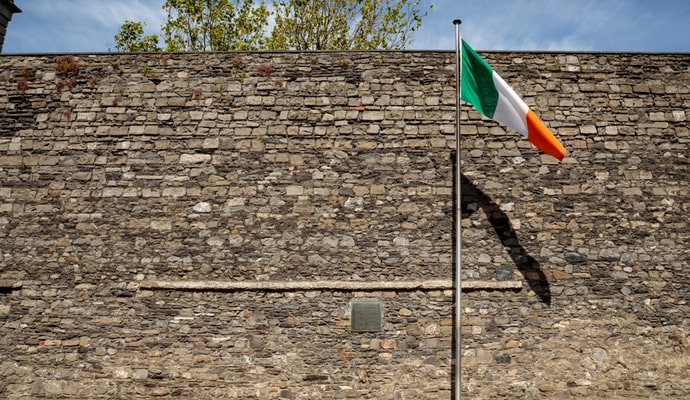 The history of the Irish flag is an interesting one. The current Irish tricolour was designed by a group of French women who supported the Irish cause.

In 1848, they presented the tricolour to Thomas Francis Meagher who was the leader of the political Irish Nationalist Movement at that time.

On receiving the flag, he famously said, “The white in the centre signifies a lasting truce between Orange and Green and I trust that beneath its folds the hands of Irish Protestants and Irish Catholics may be clasped in generous and heroic brotherhood”.

If you’re curious to know more about the divide in Ireland, have a read of our guide to Northern Ireland v Ireland.

When it was unveiled

Meagher first publicly unveiled the flag from an upstairs window of the Wolfe Tone Club in Waterford City where he was addressing a crowd of Irish nationalists.

However, it was not until 1916, at the Easter Rising that the tricolour was first hoisted above Dublin’s General Post Office by Gearóid O’Sullivan.

It captured the spirit of the revolutionary movement and from that time onwards, the tricolour was regarded as the Republic of Ireland or Sinn Féin flag.

Although the Ireland flag was commonly flown from that time onwards, it only received official constitutional status as the national flag of Ireland in 1937.

The previous flag of Ireland

The history of the Irish flag goes back much further than the now-iconic tricolour. The previous flag of Ireland was emerald green with a golden harp which was used as early as 1642.

Green has long been the colour associated with the “Emerald Isle” and the Irish harp was (and still is) the official symbol of Ireland.

A brief history of the Irish flag in Northern Ireland

Interestingly, you will see the Irish flag is used on both sides of the Irish border. Nationalists in Northern Ireland also defer to it over the Union Jack which represents the unionist community.

It was officially banned in Northern Ireland in 1954 as it was considered likely to cause a breach of the peace. However, the removal of it from the Sinn Féin HQ in Belfast led to two days of rioting and was repeatedly replaced.

10 interesting facts about the Irish Flag 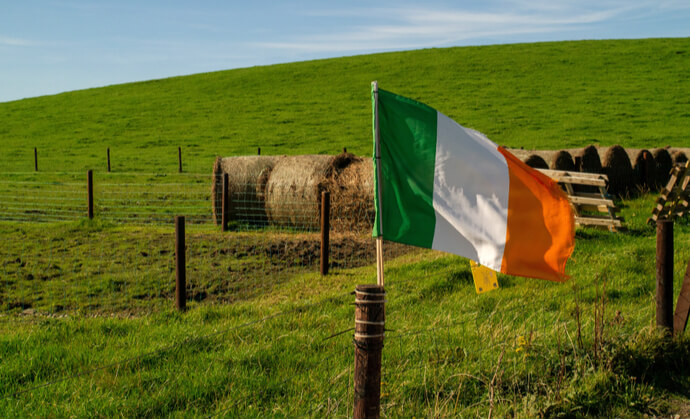 Photo via mark_gusev on shutterstock.com

You’ll find one-hundred-and-one Ireland flag facts online. However, we’ve chosen what we believe are 10 of the most interesting for you to read.

1. The official name in Irish

The Irish name for the tricolour flag and ensign is Bratach na hÉireann; “bratach” being the Irish word for flag.

In songs, the colours of the Irish flag are sometimes referred to green, white and gold. Occasionally flags are flown with a gold stripe rather than the orange colour.

However, this is actively discouraged as it undermines the Irish Protestant representation and makes them feel excluded.

3. The similarity to the Ivory Coast flag

Interestingly, the flag of Ivory Coast is almost identical to the flag of Ireland but is slightly shorter and is flown with the orange band next to the hoist. In several international incidents the flags have been confused and in some cases mistakenly desecrated.

4. Loose links to the French

The Ireland flag is very similar to the French tricolour but uses different colours. The French flag represented the French Revolution which had successfully overthrown the monarchy of King Louis XVI and established a republic.

The parallel in terms of political desire was strongly felt and the first time the Irish flag was flown it was accompanied by the French tricolour.

Although the green, white and orange flag was first flown in 1848, it was another 68 years before it was officially recognized as the national flag of Ireland.

6. Its use in burials

When a coffin is draped with the Irish flag, the green stripe should be closest to the head and the orange at the feet, regardless of the person’s religion.

7. It was designed by a group of French women

You may have come across this one in our guide to facts about Ireland. The history of the Irish flag (the current one, that is), is closely linked to France. In fact, the flag was designed by a group of French women who supported the Irish cause.

8. The green came from the Society of United Irishmen

The shamrock green in the flag comes originally from the Society of United Irishmen and was used by the republican movement pre- 1790.

Other Irish flags in common use include the red X cross on a white background known as the Cross of St Patrick. It was incorporated into the British Union Jack.

FAQs about the flag of Ireland

We’ve popped in some of the most FAQs that we receive about everything from the history of the Irish flag to facts and more below.

If you have a question that we haven’t tackled, feel free to ask away in the comments section below.

Does Ireland have two flags?

What does the Irish flag mean?

The meaning of the Irish flag is nice and straight forward:

What flag is similar to the Irish flag?

The Ivory Coast flag is very frequently mistaken for Ireland’s flag in the media, much to the annoyance of both countries.

Thank you for this information regarding the Irish flag. It was very interesting to learn the history of the flag. I visited Ireland in 2008 and stayed in Dublin, Kilkenny, Kinsale, and Killarney and went around the Ring of Kerry. I need to return to go to Galway and tour Northern Ireland, beginning with Belfast. It is sooooo good to have dreams ☘️🇮🇪☘️

Thank you, that was very interesting about the irish flag. My grandmother came from Ireland, Cork. I have been too ireland many times. My next trip will be this year. Can't wait.