A couple of months back we started a bit of a mini-series that shines the spotlight on some of Ireland’s hidden gems.

Over the last few weeks, we’ve looked at everything from secret waterfalls in Donegal to castles plonked smack bang in the middle of lakes.

Today, we’re off to County Galway to have a gander at a naturally formed phenomenon that’s found on the mighty Inis Mór Island.

Welcome to Poll na bPeist: The Wormhole on Inis Mór 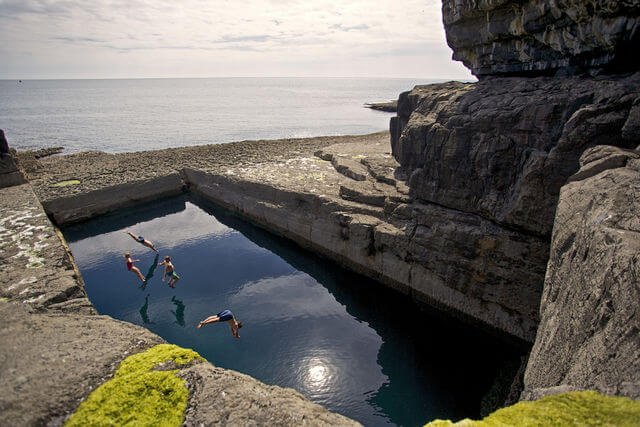 Although you’ll often hear it referred to as ‘the Serpent’s Lair’ and ‘the Wormhole’, the official name for one of the Aran Islands most unique attractions is ‘Poll na bPeist’.

You’ll find Poll na bPeist around 1.6km south of the magnificent cliffside fort of Dun Aonghasa, on the west side of Inis Mór Island.

Although the finely-cut edges would lead you to believe that this is a man-made swimming pool, it was in fact formed naturally… which is a little bit mental to think, when you look at the photo above!

Poll na bPeist has a number of underground channels which connect to the ocean. When the tide is in, water rushes into the hole via an underground cave and forces the water over the edges, filling the hole from above.

Warning: Although it’s strongly advised that you never enter the water here.

Yes, this is where the Red Bull Diving Series took place

If you’re looking at the pictures above and thinking that you’ve seen the Wormhole on Inis Mór before, the chances are you saw some of the videos from the Red Bull Diving Series that went viral in 2017.

Inis Mór was the first stop on the 2017 Red Bull Cliff Diving World Series. Divers gracefully hopped into a sinking and swelling blowhole. Bricks would be shat…

Divers jumped from a diving board on the cliffs above down into the chilly waters below. Bash the play button above and feel your stomach twitch.

How to get to the Wormhole 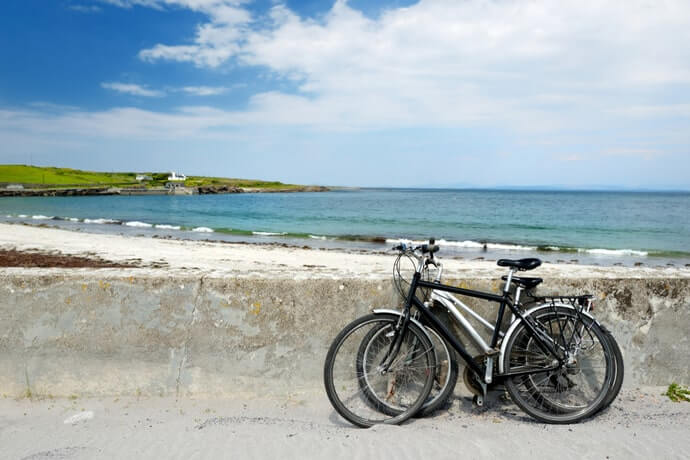 You’ll find the Wormhole on the island of Inis Mór, the largest of the three Aran Islands. There are several ways to get here:

Pair a visit to the Wormhole with a visit to Dun Aonghasa. You’ll reach Dun Aonghasa first. Have a nosey out at the cliffs here and the magnificent fort.

From here, follow the signs for Gort na gCapall (or just ramble (carefully east along the cliffs from Dun Aonghasa).

Other things to do on Inis Mór 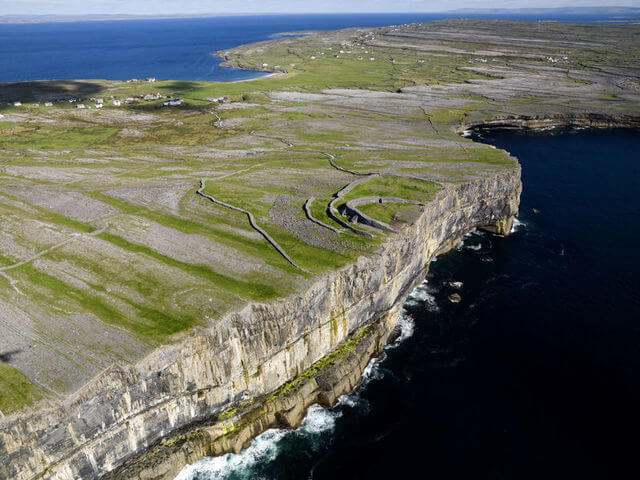 If you hop into our Inis Mor guide, you’ll find heaps of places to visit! This place is home to some of the best things to do on the Aran Islands.

If you’re visiting Galway and you’re debating taking a ferry (or a flight) over to the Aran Islands, then get off the fence – they’re WELL WORTH the visit!

The three islands of Aran (Inis Mor, Inis Oirr and Inis Meain) are home to an almost endless number of things to see and do, from spectacular cliffs and plenty of forts to historic sites and lovely little cafes

If you fancy exploring the three islands over the course of a long-weekend, you’ll find a full itinerary to follow in our Aran Islands tour guide.

Can you swim in the worm hole ??

The ranger at the fort pointed out the area of the worm hole to us from the cliff and we biked to the housing section and walked from there. There weren't any signs, just red arrows painted on rocks that we followed. My husband and I were the ONLY ones there and it felt like being the only people left on Earth. Was actually a very spiritual experience

Enjoyed this walk down memory lane. When anyone gets to Inis Mor, please give our very best to Bride at The Pub. We were there in Oct 2016. It was a Fabulous trip!!

I have always wanted to travel back to where my family originated. But I cannot physically travel. Your site helps me look at places only mentioned by other family members. Keep it up I'm loving everything you do.

Hello Keith, improvisors from around the globe were supposed to be traveling to Ireland this week for an improv retreat with workshops, shows, Guinness and Jameson drinking. Many of us were going to be touring the island before and after the retreat. That all came crashing down. We are trying to salvage what we can (we are improvisors after all) and are taking a virtual trip to Ireland. I just found your site, and it will be a nice addition to our exploratory guides.

Ah, I know the feeling Joe! I was on a trip that had been planned for a long time and had to cut it short. We'll both be able to resume our adventures some time some.

Thanks for the kind words.