There’s an almost endless number of things to do in Fermanagh, if you plan your trip well.

On previous visits to the county, I’ve only taken the time to walk the Cuilcagh Legnabrocky Trail, and I’ve missed out on places like the Marble Arch Caves and Lough Erne.

Below, I’m going to take you through a full guide on places to see in Fermanagh along with an ample number of things to keep you occupied during your visit. 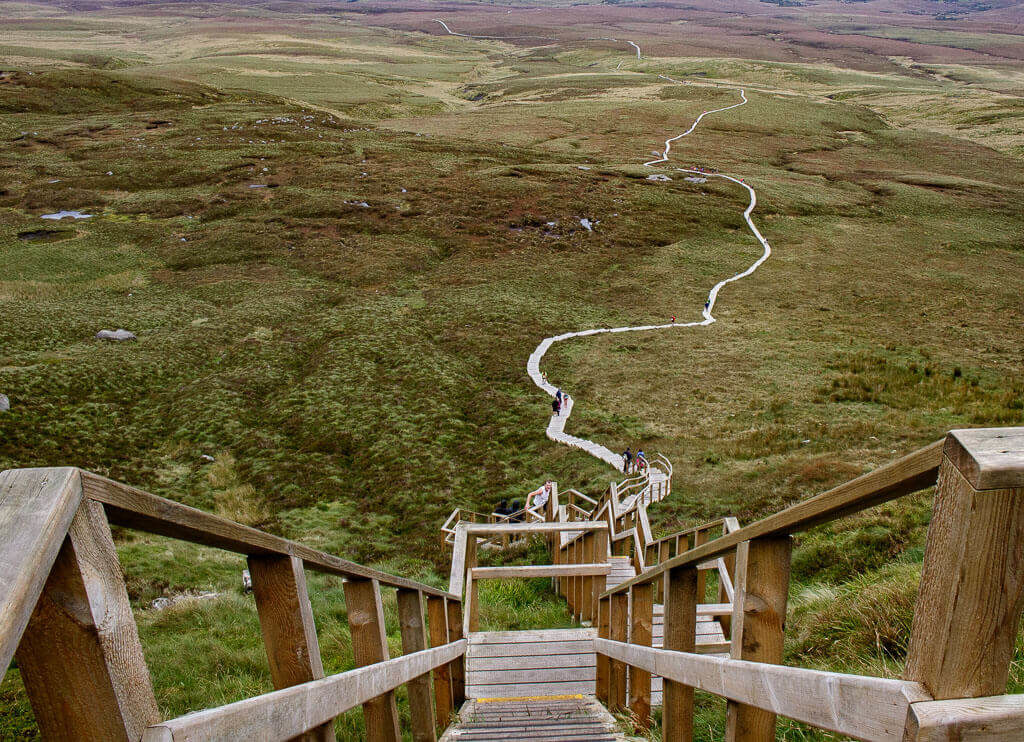 Often referred to as the ‘Stairway to Heaven Ireland‘, Cuilcagh Mountain is home to the now iconic boardwalk that has gone viral a million times over.

Those that fancy visiting can embark upon several walks up Cuilcagh Mountain, ranging from 2.5 to 6 hours long.

Well worth the visit. 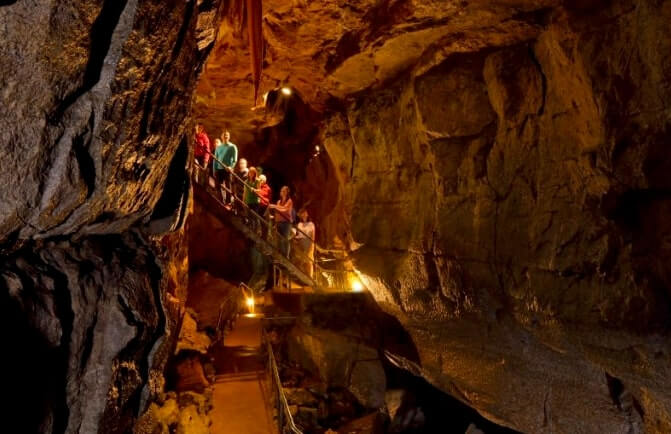 The Marble Arch Caves are a series of natural limestone caves found near the village of Florencecourt.

Spanning around 11.5 kilometres in length, these caves are officially the longest known cave system in Northern Ireland.

The tour takes visitors on a handy walk down through the Marble Arch National Nature Reserve, before taking a short 10 minute underground boat journey and then a 1.5km walk through the showcave.

Related Read: find out everything you need to know about visiting the Marble Arch Caves.

3. Live like a president for a night at Lough Erne 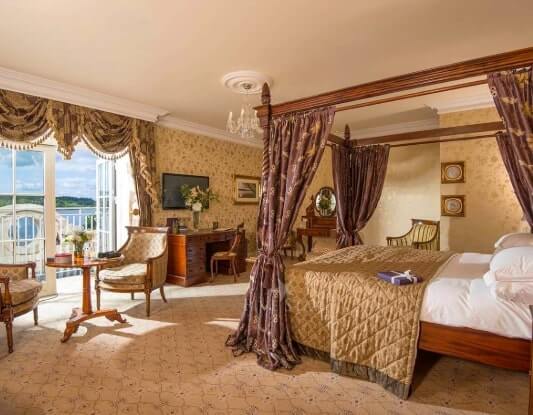 Spend a night flaked out in the swanky five-star Lough Erne Resort, where the likes of Obama, Putin and Merkel stayed for the G8 Summit.

According to reports, Putin swam in the lake while Obama spent time in the gym.

The hotel is set on a lush peninsula in the Fermanagh Lakelands, and boasts spectacular views throughout.

4. Head for a scenic walk (or a drive) around Navar Forest 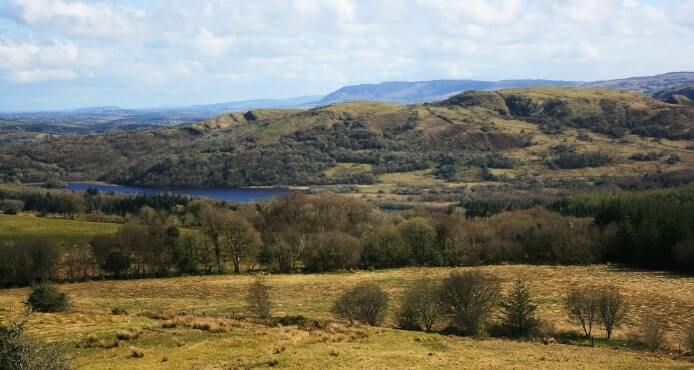 The spectacular seven-mile drive through Navar Forest is easily one of the best things to do in Fermanagh.

Those that reach the car park at the top of the cliff will be treated to a magnificent view over Lough Erne, from Enniskillen out to Donegal and on to the Atlantic Ocean.

Prefer to walk it? Here’s a guide to some of the walks you can head off on.

5. Get a post walk feed at the Watermill Restaurant 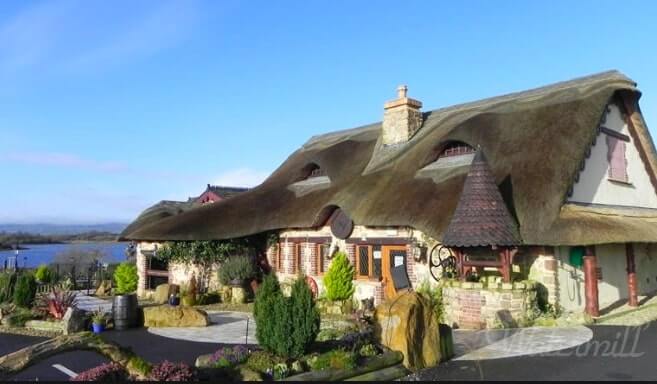 I was sold on this place the minute that I saw the thatch roof.

You’ll find the Watermill Restaurant a 10-minute drive from the village of Lisnaskea, finely placed for those looking to eat and relax on the shore of Lough Erne.

6. Walk off the food at Enniskillen Castle 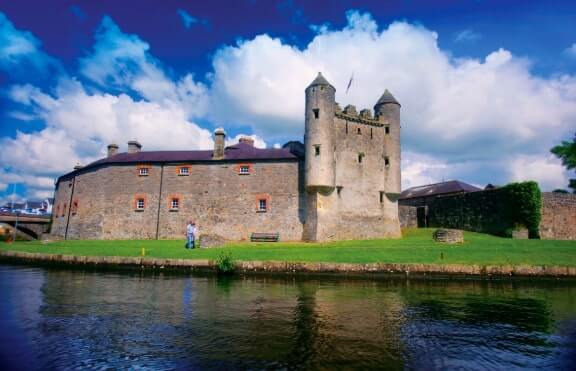 Enniskillen Castle is, unsurprisingly enough, situated in Enniskillen and you’ll find it topping many guides on the best things to do in Fermanagh,

I’ve no idea what a ‘Dragoon’ actually is (kind of sounds like a Scottish fellah saying ‘Dragon’…), but the reviews for this place are top notch.

Opinions Needed: This tops many guides on the most worthwhile things to do in Enniskillen. Have you been here before? Was it worth the visit? Let me know in the comments section at the bottom of this guide.

7. Grab a haircut explore the golden age of steam travel at the same time

This is a very unique barbershop.

Many moons back the Johnston family’s decided to combine their barbering skills with their love of local railway history.

The result? The birth of the Headhunters Barber Shop & Railway Museum.

The museum is home to one of the largest collections of Irish railway memorabilia in the country, and includes everything from uniforms to signalling instruments.

8. Sink a pint and geek out about Game of Thrones at the Blakes of the Hollow pub 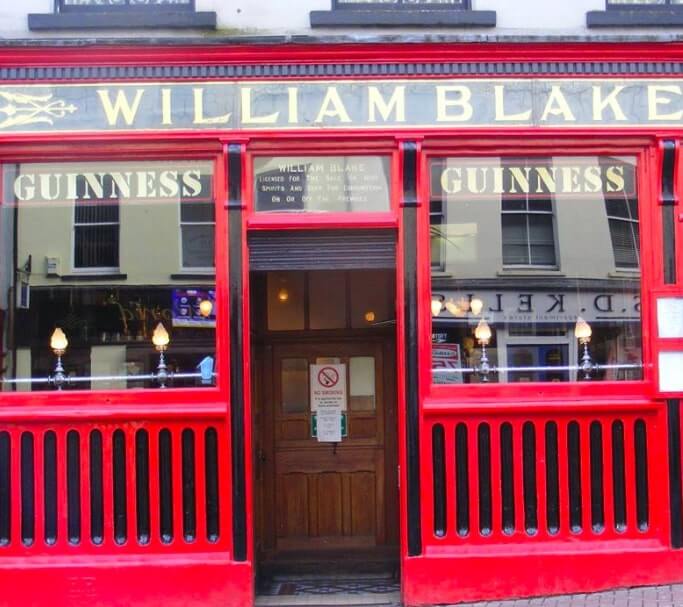 Blakes of the Hollow is one of the most well-known Victorian pubs in Ireland.

You’ll find this traditional Irish pub on Church Street in Enniskillen, where it’s been keeping regulars and tourists alike refreshed for over 125 years.

Blakes of the Hollow recieved it’s fair share of press coverage back in 2016 when it became part of Tourism Ireland’s the ‘Door of Thrones’ Game of Thrones campaign, created in partnership with HBO.

The folks at Tourism Ireland used the wood from two trees at the Dark Hedges to make a series of 10 beautifully engraved doors, each one telling the story of the latest episode in season six.

9. Explore Lough Erne from the comfort of a chauffeur driven water taxi 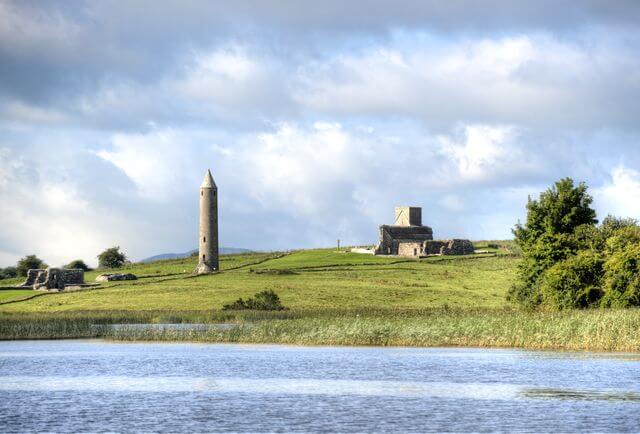 You’ll leave from Enniskillen at the side of Fermanagh Lakeland Forum Leisure Centre and be taken through the history of Lough Erne by your tour guide.

A very alternative way to explore the area and great for anyone looking for things to do in Fermanagh with families with small children.

10. Take the ferry out to Devenish Island 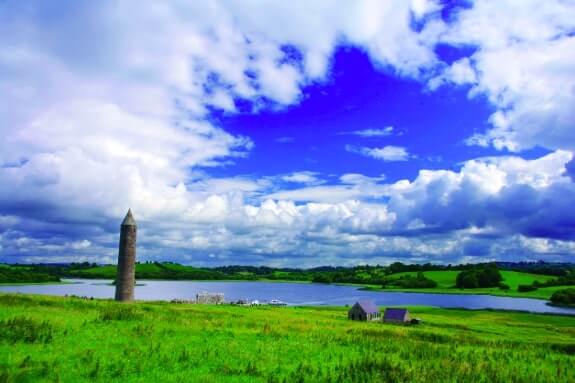 Devenish Monastic Site was founded back in the 6th century by Saint Molaise, on one of Lough Erne’s many islands.

Devenish has had a pretty turbulant history.

It was raided by Vikings in 837AD and then set alight in 1157AD. It wasn’t until it became a parish church site and St. Mary’s Augustine Priory in the Middle Ages that it finally flourished.

11. Sleep under the stars at Finn Lough 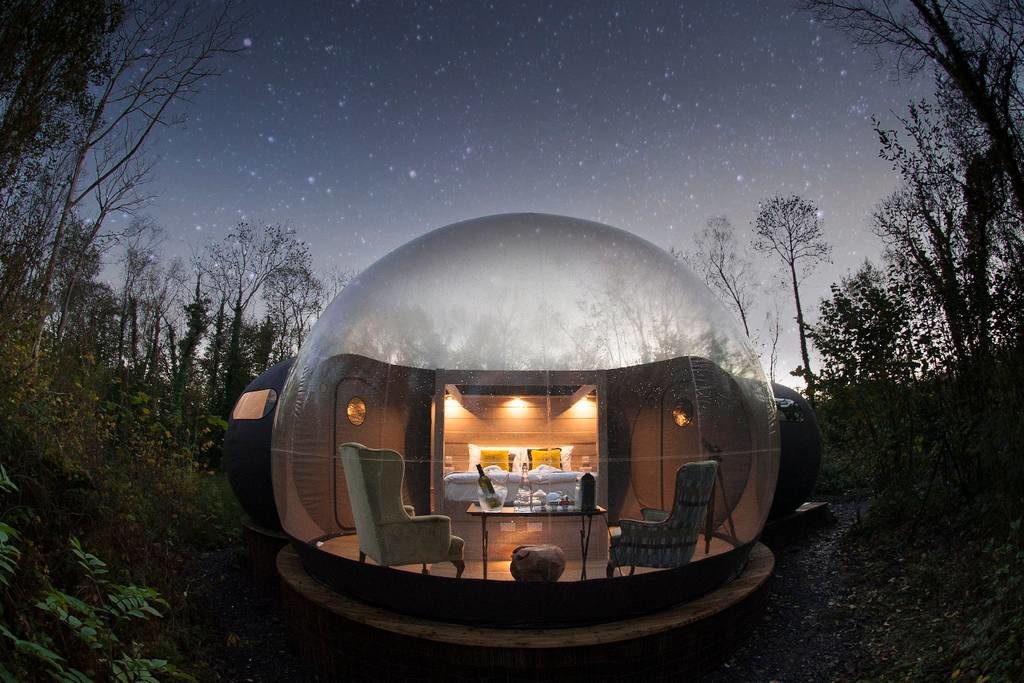 A night in one of the bubble domes in Finn Lough is definitely a unique way to spend the evening in Fermanagh.

Spend an evening exploring the county and then kick-back beneath a (hopefully) star-strewn sky at night.

Related Read: Check out our guide to the 23 of the most unique places to stay in Ireland.

12. Visit Tully Castle and learn about its dark past

Caisleán na Tulaí (meaning ‘Castle on the Hill’) is a castle in County Fermanagh on Blaney Bay, on the southern shore of Lough Erne.

Tully Castle was constructed for Sir John Hume, a Scottish planter, in 1619. During the Irish Rebellion of 1641, Rory Maguire set out to take back his family’s land from the Humes.

Related reads: Drop into our guides to the best Irish castles and the best castles in Northern Ireland.

13. Have a ramble around Castle Coole

This is another great one for anyone looking to get out, head for a stroll and gulp down lungfuls of fresh air.

Castle Coole is one of the finest examples of a Neo-classical house in Ireland. Visitors here will be given a glimpse into what life was like in the home of the Earls of Belmore.

14. Have a gawk at Monea Castle 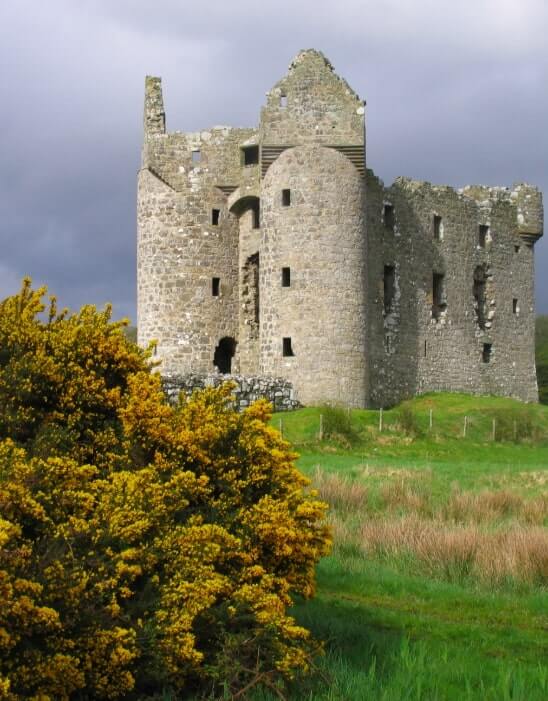 The Plantation of Ulster took place during in the early 17th Century and was an attempt by the English to take control of the province of Ulster.

King James confiscated land and granted it to those that would settle in Ulster and support the crown.

Many of those that settled were English and Scottish and, unsurprisingly, they found themselves amongst a hostile native population.

So, they built defensive dwellings to keep out and defend themselves from the locals.

The biggest (and the best preserved) of the Plantation Castles in Fermanagh the one at Monea, which was built by 1618.

Hungry for more? The video below gives you a taste of what you can expect from the Fermanagh Lakelands.

Are there other great things to do in Fermanagh that we missed?

Let me know where else you’d recommend visiting in the comments section below.

We’ll updated the guide with every great recommendation that checks out. 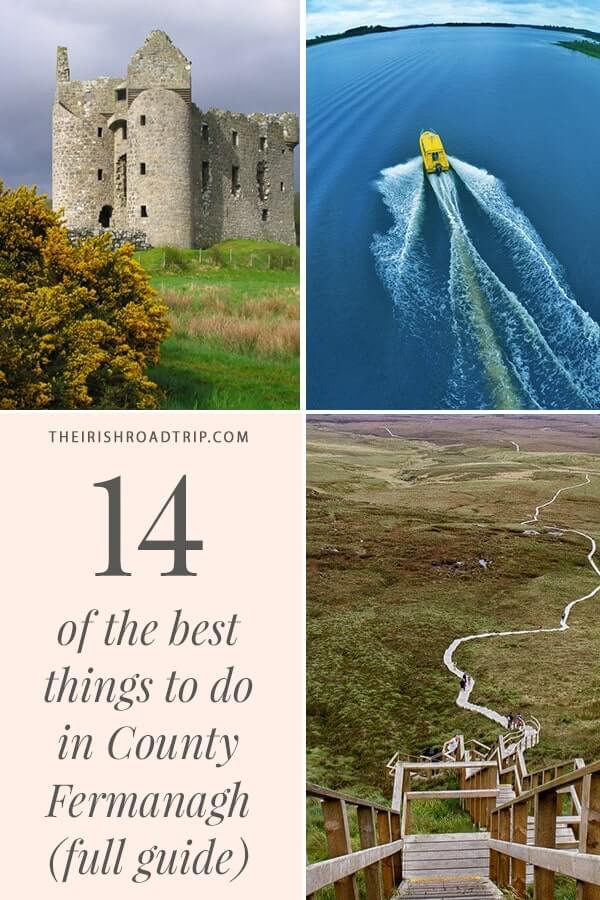 Lusty beg Island resort with Norwegian cabins and stone built houses,bar restaurant and wellnes centre with pool check it out

Super recommendations and a great read :)

Hi Keith. Love the blog and you have hit the nail on the head with these attractions. If you're looking to add more then I recommend Share Discovery Village, an NI registered charity that offers accessible activities & holidays to disabled and non-disabled people. There is 30+ thrilling activities on offer here on the banks of Upper Lough Erne from canoeing and sailing to archery and climbing. That's only scratching the surface - Trannish Island Bothy is one of their more unique experiences on a deserted island. Definitely a place not to be missed if you're looking a thrill in Fermanagh.

A visit to Castle Archdale, you can hire a boat, camp there, caravan on site, beautiful open woodlands waiting to be explored dogs are also welcome if kept on a lead. Gorgeous place to visit, walk the dog and have a wee picnic or bbq.

Hi Keith. I'm from fermanagh myself and you have listed some of the great attractions that we have! One thing I would definitely add is Share Discovery Village. SHARE is a charity on the banks of Upper Lough Erne and they are Ireland's largest residential activity centre. They provide accessibility to all and have over 30 land and water activities. https://sharevillage.org/. But the bit that may be most suitable for this blog is their into-the-wild glamping experience on Trannish Island. They own part of Trannish Island on which there is a Bothy which provides a cosy and secluded overnight glamping experience. The island is only accessible by paddling out to it which adds to the unique experience. https://sharevillage.org/trannish-island-bothy/