There’s some stunning waterfalls in Donegal.

And, while it’s the ‘secret’ waterfall that tends to attract much of the attention online, there’s plenty of other waterfalls dotted around the county worth seeing.

From Assaranca Waterfall and Glenevin Waterfall to the often-missed Crolly Waterfall, there’s plenty to choose from, as you’ll discover below!

Our favourite waterfalls in Donegal 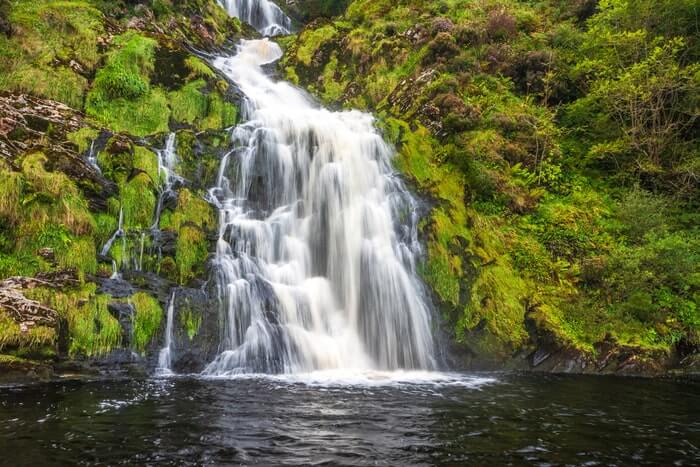 The first section of our guide is packed with some of the most popular waterfalls Donegal has to offer.

Below, you’ll find everywhere from the Largy Waterfall and Assaranca to Glenevin and more. 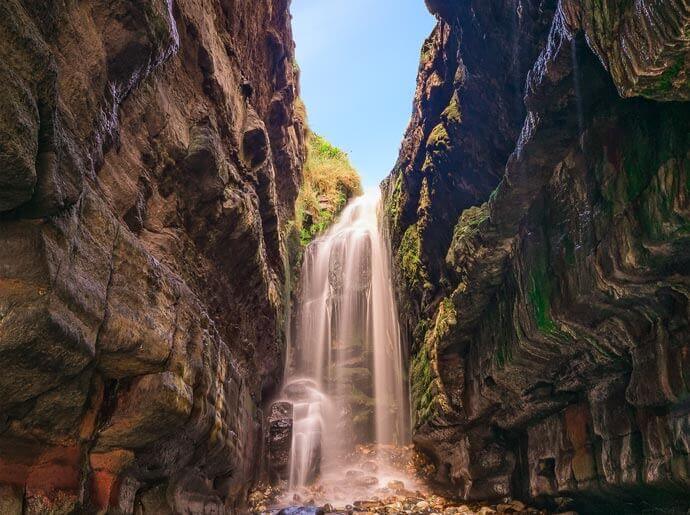 Donegal’s ‘secret’ waterfall near Largy is one of the most unique natural attractions on the Donegal coast. However, a visit here comes with many warnings.

It can only be visited at low tide, there’s very limited parking (please only parking in designated places) and the path down to the falls is slippery, and people have been hurt walking here in the past.

You can check out our detailed guide to finding this place but please do take heed of the warnings. 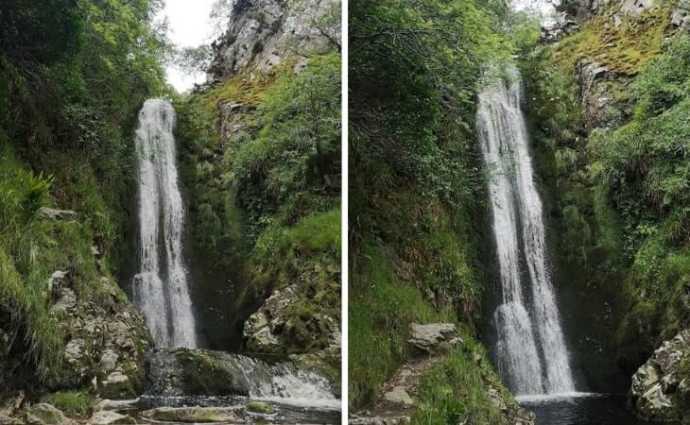 Just outside of Clonmany on the northwestern side of the Inishowen Peninsula, the stunning Glenevin Waterfall drops over an almost 40-ft high escarpment. Tumbling down through the forest, it’s a magical spot to head for a wander and a picnic.

The walk to reach the tall cascade is relatively short, with a well-marked trail that stretches for around 1km or so. It’s definitely much easier than trying to find the ‘secret waterfall’!

There’s plenty of places to stop for a picnic closer to the car park as well, with a coffee van on-site during the summer months. 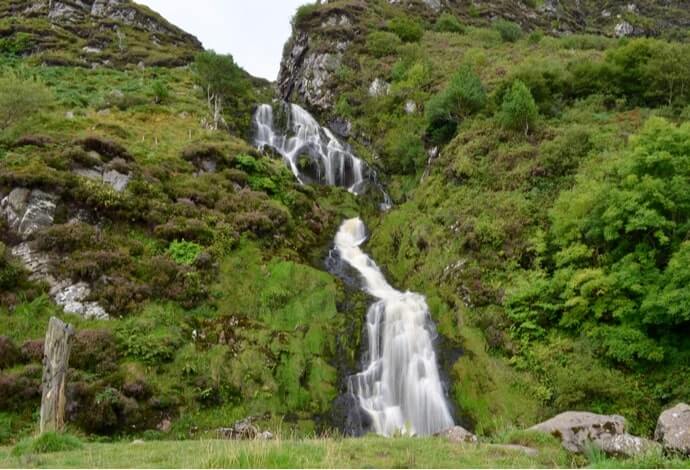 Another of the more popular Donegal waterfalls is the mighty Assaranca Waterfall near the little town of Ardara. It’s finely located on the way to Maghera Caves and Beach and it’s not far from Glengesh Pass.

The best part is that Assaranca is one of the easiest waterfalls in this guide to reach. It’s literally on the side of the road so you can’t miss it as you drive past.

There’s plenty of room to pull over and enjoy the view. It’s most impressive after heavy rainfall when the water is really thundering over the hill.

Other lesser-known waterfalls in Donegal 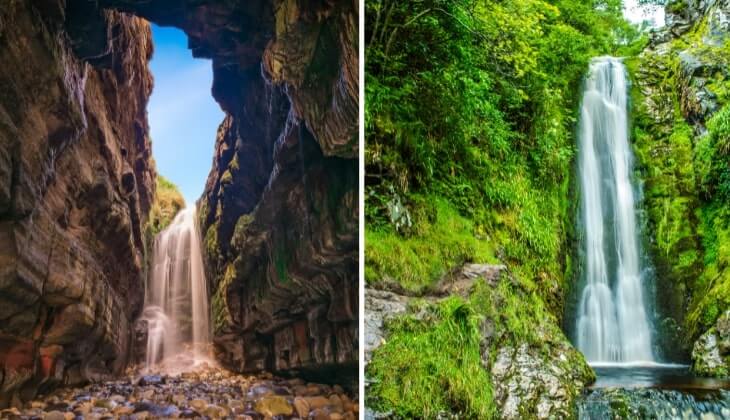 Now it’s time to have a nosey at some of the lesser-known Donegal waterfalls, some of which are more impressive than others.

Below, you’ll find everywhere from Crolly Waterfall and Lennon River Waterfall to a hidden gem near Assaranca. 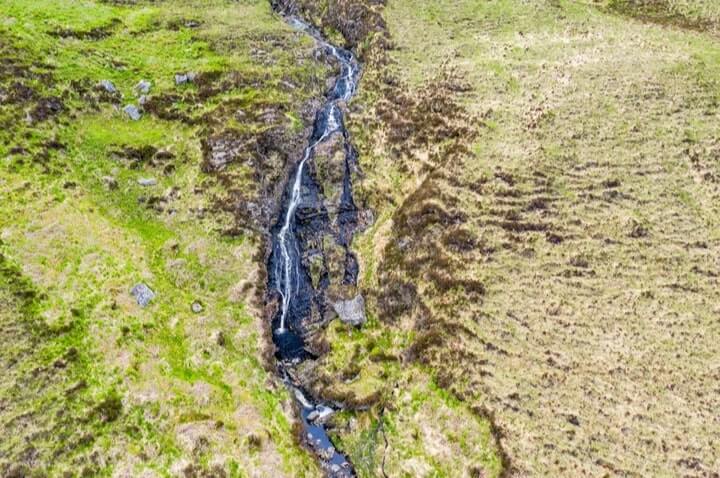 The Crolly River runs through the village of Crolly and it boasts a couple of waterfalls that tumble through the rolling green landscapes it flows through.

There’s a smaller cascade that can be seen from the road just opposite the distillery, however, there is also a lesser-known spot down a country lane that you should check out.

Take the road out of Crolly heading for Loughkeel for around 5km. You’ll see a tall, skinny waterfall on your left just past the lake, tumbling down through a crevasse in the mountains.

A really pretty spot just outside of Ramelton, the Lennon River Waterfall is a great spot for a picnic and a wander. It’s located on a road just off R249, outside of the town.

You can park at the Drummonaghan Woods area and walk the 2 minutes to the waterfall.  The wide falls cascade over a rocky ledge down into the river below. You can hear the falls before you see them from the road.

The area is at its best in Autumn, when the trees have turned a golden orange colour, but it’s a beautiful spot all year round. 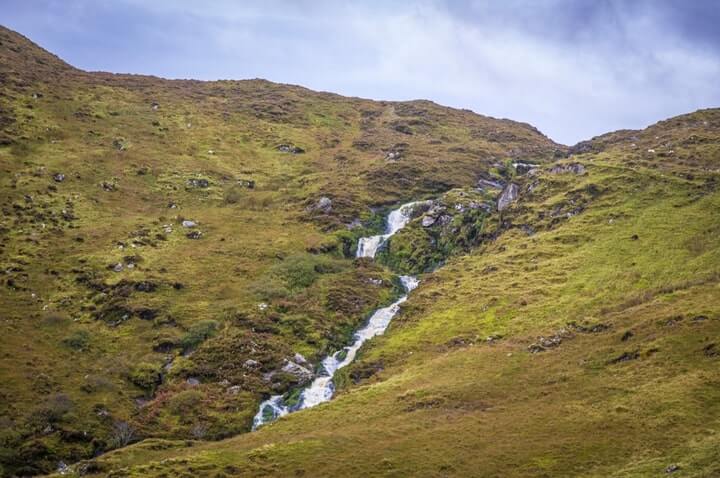 If you continue down the country road past the more popular Assaranca Waterfall and past the turn off for Maghera, you’ll eventually come to another lesser-known waterfall.

Owenwee River Waterfalls is an incredibly beautiful tall cascade of water running down through a valley. You can see it from the road as you’re winding your way up the mountain, with stunning views across the waterfall and back down towards the coast.

There’s not much room to pullover on the road, except for a small area at the foot of the waterfall, so be very careful!

Donegal waterfalls: Which ones have we missed?

I’ve no doubt that we’ve unintentionally left out some brilliant waterfalls in Donegal from the guide above.

We’ve had a lot of questions over the years asking about everything from ‘Where’s the secret waterfall in Donegal?’ to ‘Which waterfalls are the most accessible?’.

What are the most impressive waterfalls in Donegal?

Largy Waterfall (the ‘secret’ waterfall), Assaranca Waterfall and Glenevin are three of the most impressive Donegal waterfalls.

Is the Slieve League Waterfall worth visiting?

We get this question a lot and people tend to be referring to Largy Waterfall. It is, but you need to be extremely careful and understand the tide times.