The residence of the Irish President is Áras an Uachtaráin and it sits proudly inside Dublin’s Phoenix Park.

The original building was designed in 1751 by a park ranger, Nathaniel Clements (he was also a keen architect on the side!) and it passed through many hands over the years.

Today, the impressive building is the home of the very popular President Michael D. Higgins and his wife, Sabina Higgins.

In the guide below, you’ll find info on everything from the Áras an Uachtaráin tour and the history of the building to what to see nearby.

Some quick need-to-knows about Áras an Uachtaráin 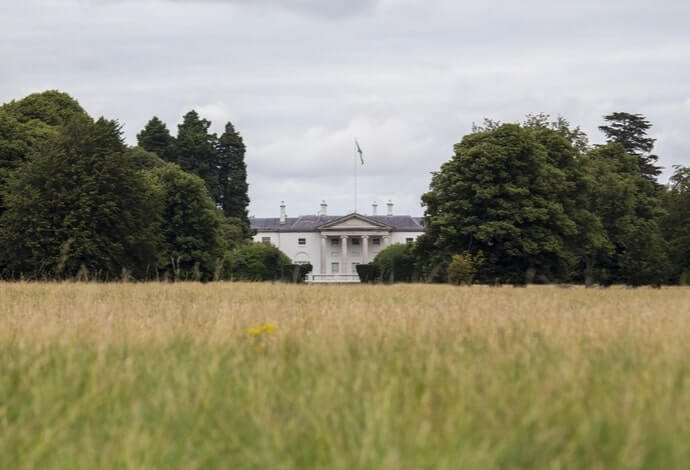 Although a visit to Áras an Uachtaráin is fairly straightforward, there are a few need-to-knows that’ll make your visit that bit more enjoyable.

Áras an Uachtaráin is located off Chesterfield Avenue in the Phoenix Park.  Several buses stop at the Phoenix Park – stop 1449, with numbers 37, 46A and 17 carrying on to the Military Cemetery – less than 1km from the Áras. The LUAS Red Line also stops near the Park.

The ‘Irish White House’ is the official residence of the President of Ireland. Not quite as palatial as other presidential dwellings with only six Staterooms, it is nevertheless a beautiful building.

The Áras an Uachtaráin tours used to take place on most Saturdays (January – December: 10.00am, 11.15am, 12.30pm, 1.45pm and 3.00pm). However, according to their website, the tours are currently suspended. We’ll update this guide when they’re running again.

Áras an Uachtaráin has hosted Presidents and royalty from near and far since the Viceroys’ time. Queen Elizabeth visited in 2011, the first British monarch to do so in 100 years. John F. Kennedy and Nelson Mandela were welcomed, as were the two popes, Pope John Paul II and Pope Francis.

5. Where to see the building

So, if you want to see the building from the position in the photo below, you need to head here on Google Maps. You’ll be able to see the front of the building and you may even see the President himself walking his dog.

The handiest car park is the one at the Papal Cross here (20-minute walk). There’s another one in the Phoenix Park Visitor Center here but, in our experience, it tends to be a little trickier to get parking here.

About Áras an Uachtaráin 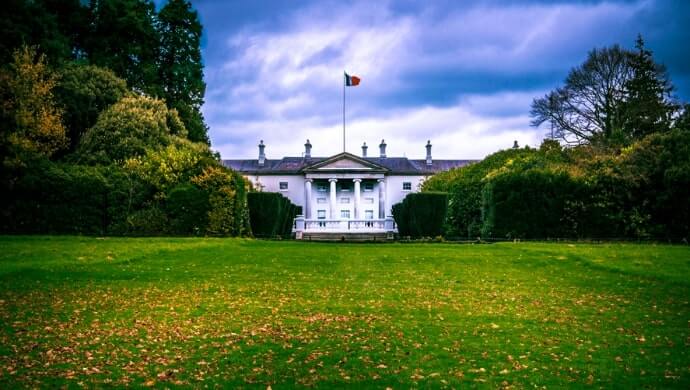 The first Áras an Uachtaráin was designed in 1751 by Nathaniel Clements, an MP appointed head ranger and the gamekeeper of the park. He was said to be one of the wealthiest commoners in Ireland, so a house befitting his status was required.

The lodge, as it was called then, was acquired by the British to become the out of season home of the Lord Lieutenant, or Viceroy, for most of the year. During the Season (social events from January to St Patrick’s Day), he lived in Dublin Castle.

There’s a similarity between the garden front porticos of Áras an Uachtaráin and the US White House. Some say the Irish version was used as a model by James Hoban, the Irish architect of the White House, while others say it was a later addition by another architect.

The grounds of the house were the setting for the Phoenix Park Murders in 1882 when three British politicians were murdered by a group of insurgents called the Irish National Invincible’s.

The first President in residence

Fast forward to 1938 when Douglas Hyde took up residence as the first Irish President. His visit was to be temporary while another residence was being built, but World War II broke out, and he stayed put.

By the time the war ended, the house had been officially named Áras an Uachtaráin and renovations were carried out and extensions built. President Mary Robinson changed its image from stuffy remoteness to modern inclusivity, and change has continued since.

Some of the most notable features of Áras an Uachtaráin

Now, although you won’t be able to admire the building up close (unless you get onto the Áras an Uachtaráin tour), you can get an OK look at it from afar.

Below, you’ll discover some of the more unique features of the building and the surrounding grounds. 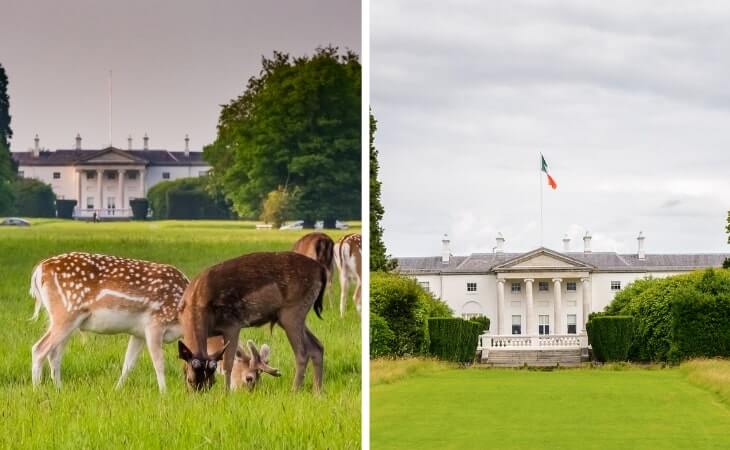 If it weren’t for the second World War, the house now known as Áras an Uachtaráin would have been demolished. It was to have been a temporary residence for Douglas Hyde, but by the time the war was over, the house had become the official address of Ireland’s President.

Áras an Uachtaráin started life as a home for its architect, Nathaniel Clements. It then became the Viceregal Lodge until 1922. The British representative became a Governor-General, and he was based there until 1938 when he had to make way for Ireland’s first president, Douglas Hyde. Take a tour to enjoy the paintings and décor. 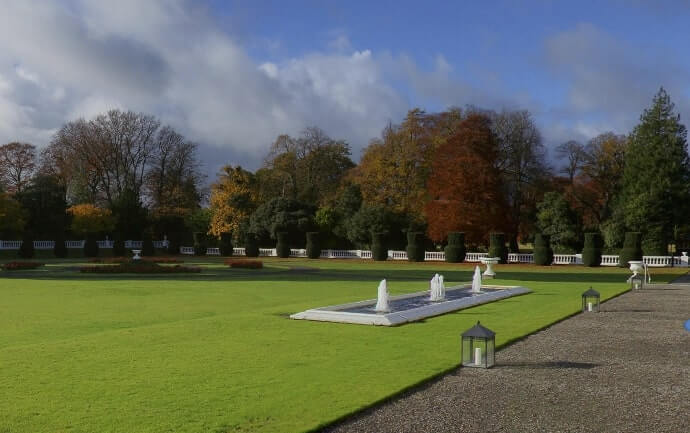 Photos via Áras an Uachtaráin

The gardens stretch over 130 acres, including parkland and formal gardens. President Higgins and his wife Sabina love the gardens and have introduced varieties of Irish vegetables to the organic garden, while the flower garden has a magnificent array of award-winning dahlias.

There’s plenty to interest any gardener with ceremonial trees, ornamental lakes, walled gardens, an arboretum and a wild area. The formal gardens lead to the Queen’s Walk and on to the Upper walled garden, which is enclosed at the south end by a Turner peach house. This garden is organic and provides fruit, vegetables, and flowers for the Áras. 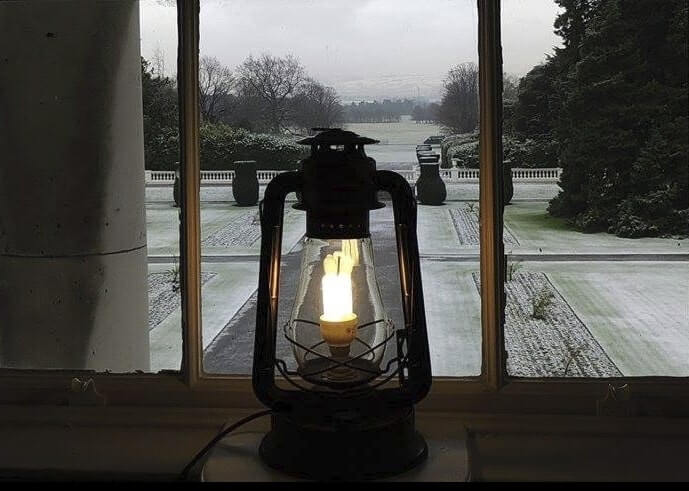 On her inauguration, the Tilley Lamp was presented to President McAleese, and President Higgins has continued the tradition.

President Higgins cares deeply for the homeless and refugees, as well as the Irish Diaspora, and the light now symbolises lighting the way for Irish emigrants and their families and immigrants to Ireland, welcoming them home.

Many of us cried along with Michael D at the loss of his beloved Síoda in 2019 and were overjoyed when he introduced us to Misneach, five months old and another Bernese Mountain Dog.

He already had Bród, who missed Síoda, and the older dog was delighted to have company. The Bernese is a gentle giant, always happy and easy to train. They’re such striking dogs, too, that they’re great ice-breakers.

These beauties have struck a chord with young and old in the country – my 10-year-old niece has recently written a story about Misneach!

Things to do after you visit Áras an Uachtaráin

One of the beauties of Áras an Uachtaráin is that it’s a short spin away from many of the best places to visit in Dublin.

Below, you’ll find a handful of things to see and do a stone’s throw from Áras an Uachtaráin (plus places to eat and where to grab a post-adventure pint!). 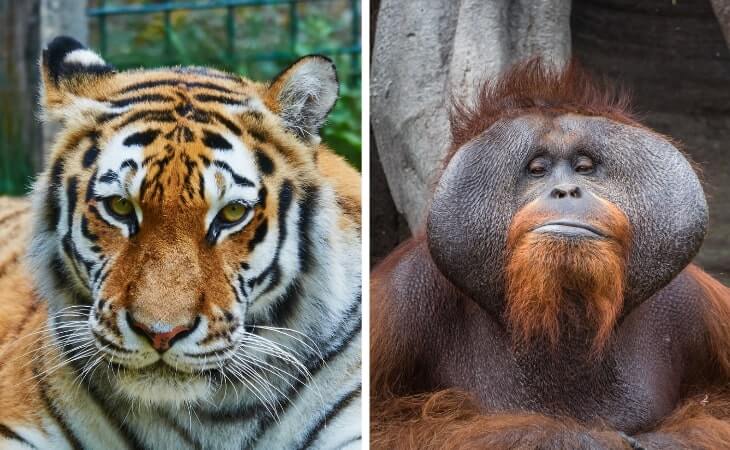 Dublin Zoo opened in 1840 with 46 mammals and 72 birds. It now has over 400 species and is spread over 28 hectares. Animals at the Zoo have plenty of space to roam, play and raise their families. Conservation plays a large part in the Zoo’s management, and it supports several conservation projects.

Deer have been roaming Phoenix Park since the 1600s when they were introduced for hunting. There are about 600 of them now, living peacefully and enchanting visitors. It’s sometimes difficult to find them, but your best bet is in the area around the Papal Cross (never feed them!).

3. Rent a bike and see the park’s many sights 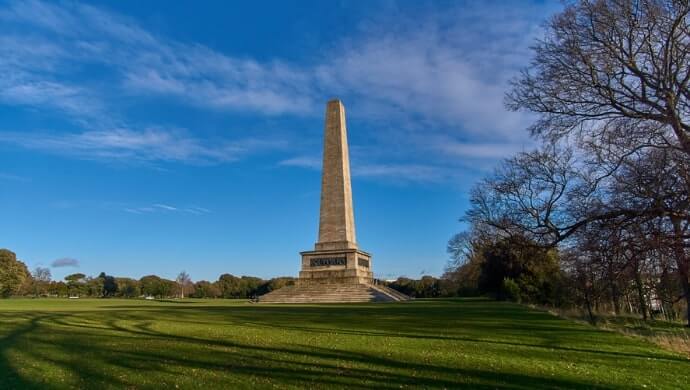 You can rent a bike in the park and head off down Chesterfield Avenue, allowing you to have views across the park and see Áras an Uachtaráin, the US Ambassador’s residence, and the Papal Cross. You can stop off at the Visitor Centre and have a coffee at the Phoenix Café.

FAQs about the Áras an Uachtaráin tour

We’ve had a lot of questions over the years asking about everything from ‘Is the tour running?’ to ‘How much does it cost?’.

Is the Áras an Uachtaráin tour still running?

The Áras an Uachtaráin tour is, according to their official website, currently not running for the foreseeable future. We’ll update this guide when it is.

Is there parking near Áras an Uachtaráin?

The handiest car park is the one at the Papal Cross (20-min walk). There’s another one in the Phoenix Park Visitor Center.