The quirky Ballintoy Harbour is one of the more well-trodden stop-offs on the Causeway Coastal Route.

Based in the picturesque village of the same name, Ballintoy Harbour is home to everything from sea stacks and rocky islands to amazing cliff tops and more.

In the guide below, you’ll discover everything from the Ballintoy Harbour Game of Thrones link to what to do when you get there. 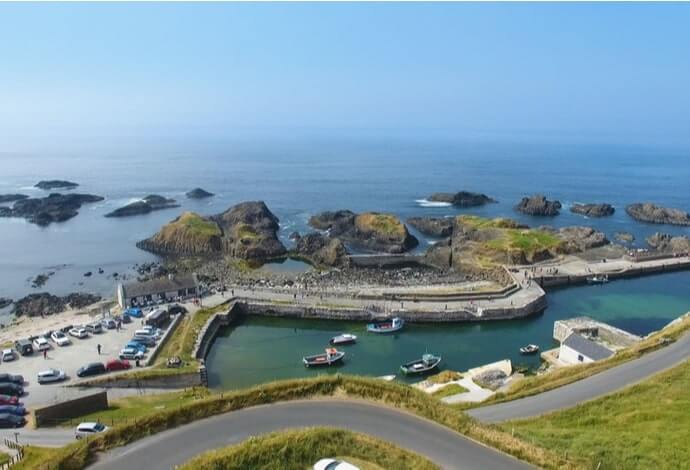 Although a visit to Ballintoy Harbour is fairly straightforward, there are a few need-to-knows that’ll make your visit that bit more enjoyable.

Warning – there is not a lot of parking in this part of the world and in the summer months, the area can get insanely busy, made all the more stressful because there is a very steep hill you need to take to get out of the harbour area. Plan for an early visit, if possible, to avoid the Game of Thrones tour buses!

3. The Game of Thrones link

The story behind Ballintoy Harbour

Ballintoy Harbour has changed very little in hundreds of years, which made it an ideal setting for the medieval style fantasy drama, Game of Thrones.

The village is home to only a couple of hundred people and was originally built around a single street. It is about one kilometer from the harbour and has some delightful small shops and two churches, including Ballintoy Parish Church, a white building that sits on the hill above the harbour.

Ballintoy Harbour and the village makes a great stopover for those undertaking the coastal route. April to September is the butterfly season when you will see many different species of these wonderful insects and there are many awesome walks you can take to fully appreciate the area’s rugged scenery. The area has toilets and a café.

The harbour is also popular with divers, as you can dive or snorkel from the beach, the rocky outcrops or from the ‘secret’ beach to the east. Visibility is said to be relatively good, ranging from 10 to 15 metres.

Things to do at Ballintoy Harbour

There’s a fair few things to do at Ballintoy Harbour if you rock up on a fine day, from the unique coastline to the views.

1. Have a read of the Game of Thrones plaque

As you might expect, Ballintoy Harbour is keen to show off its connections to the silver screen and there’s a plaque that commemorates the connection. The plaque shows a picture of Theon arriving at the Iron Islands and some of the other scenes that feature the harbour.

When you stand in front of it and take in the view, it is easy to see why a location scout would hit upon this part of the Irish coastline as a great spot to film as there is so little here that hints of the 21st century. 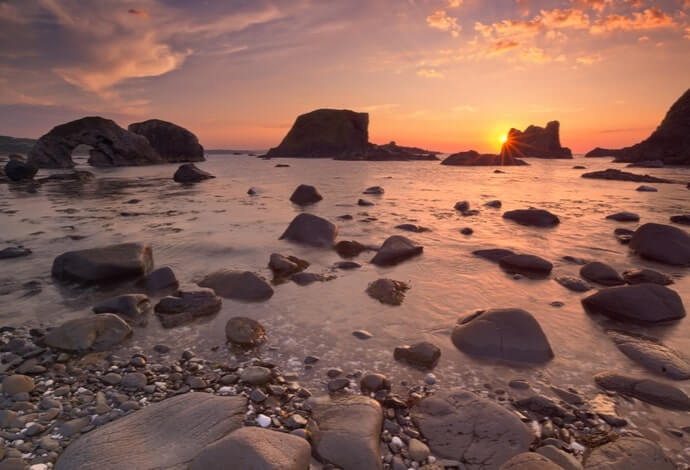 There are some crazy looking formations in this area that are well worth exploring. Take a hike around and gaze at the landscape in awe, which will make you wonder if giants did, in fact, roam the land, carving out the bits of it you now see before you.

As ever, with Irish weather, expect anything and you should be sorted. Lightweight layers and sturdy boots are your best choice for picking your way over those rocks and rockpools and remember to have your camera or phone to hand to capture the amazing scenery. 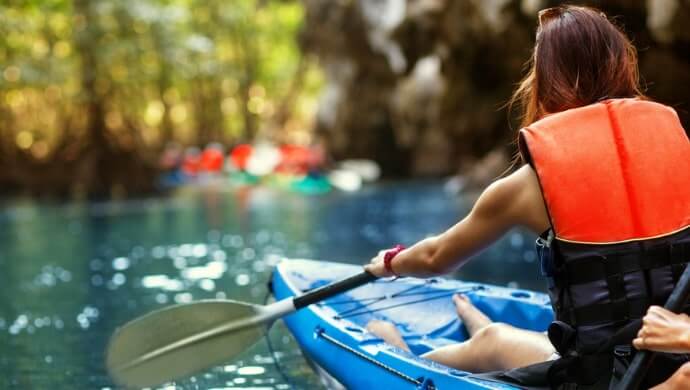 Causeway Coast Kayaking Tours (not pictured above) will show you the beauty, heritage and history of Northern Ireland from the unique perspective of the sea. The tours suit a variety of experience, from beginners to those who are old hands at kayaking and are led by qualified and knowledgeable guides.

One speciality is the kayaking and food tour, which is run in conjunction with The Lighthouse Bistro in Whitehead, where you tuck into delicious dishes made from local produce after building up an appetite with some outdoor exercise. 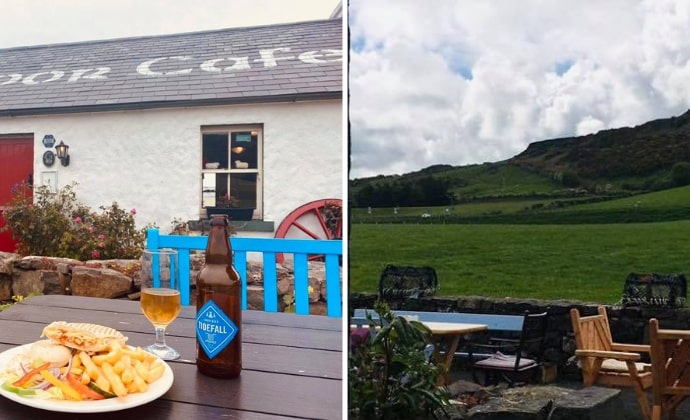 The McGarrity family’s Red Door Cottage Tea Room & Bistro is a traditional thatch cottage set in the hills, which offers hungry tourists traditional food, and is the perfect stop after you’ve explored the area’s stunning coastline.

The team room focuses on using local produce and traditional dishes, such as the world-famous Irish stew.

You can also order mackerel fished from the nearby harbour, and all the meat, eggs, potatoes, fruit and vegetables come from local producers too. Cakes and scones are also available and the tea room has outdoor seating, as well as indoor.

Things to do near Ballintoy Harbour

One of the beauties of a visit to Ballintoy Harbour is that it’s a short spin away from many of the best things to do in Antrim.

Below, you’ll find everything from scenic drives and a very well known rope bridge to food, historical sites and more.

The Carrick-A-Rede Rope Bridge was first erected by fishermen more than 200 years ago and is now a major tourist attraction run by the National Trust. Cross the bridge to marvel at the scenery and the views it allows. There is also a restored fisherman’s cottage nearby that provides an excellent overview of the tough life salmon fishermen faced in years gone by. 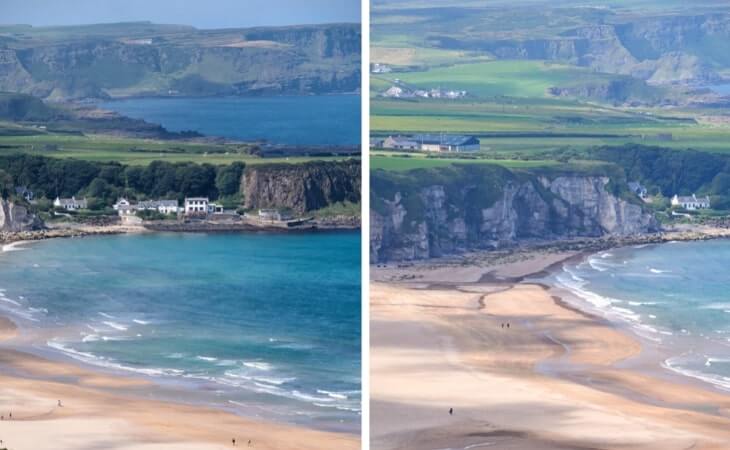 The spectacular Whitepark Bay Beach that forms a white arc between two headlands. The beach is not safe for swimming, as it has dangerous rip currents but it’s a lovely spot to take a walk and for all wildlife lovers thanks to the dunes that are home for butterflies, orchids, birds, otters and other sea life. Look out for the famous Elephant Rock, too, and the cows that wander the beach. 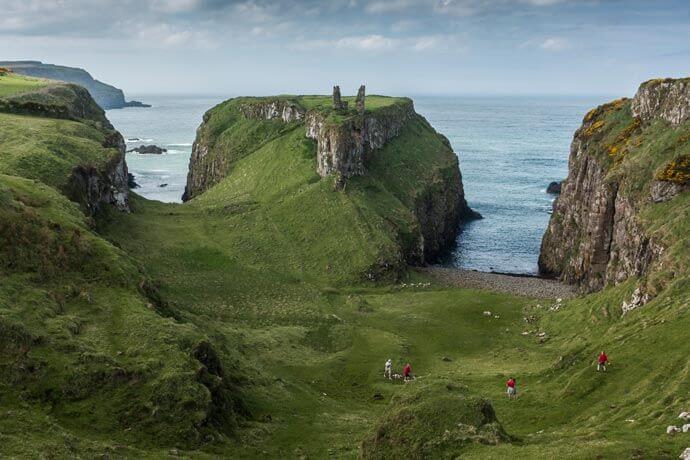 Another National Trust property, Dunseverick Castle is the ancient royal site of a Gaelic kingdom and is said to have been blessed by St Patrick. Historical records show that Vikings attacked the fort in the 9th and 10th centuries, and it later became a centre for the Earls of Ulster and the McDonnells. It is located on the Causeway Cliff Path.

This state care historic monument is situated on the townland of Cregganboy. Not much of Kinbane Castle remains and you’ll need to climb a narrow, stepped pathway to reach it, but the top rewards the patient walker with views over the seas and is well worth it.

FAQs about Ballintoy Harbour in Antrim

We’ve had a lot of questions over the years asking about everything from the Ballintoy Harbour Game of Thrones link to what to do when you’re there.

What is the Ballintoy Harbour Game of Thrones link?

Is parking really that bad at Ballintoy Harbour?

At times, the parking here is a mess. And it’s further complicated by the narrow roading leading to the harbour. Arrive early or late to avoid the hassle.

What is there to do at Ballintoy Harbour in Northern Ireland?

Have a read of the Game of Thrones plaque. Explore the very unique coastline. Hit the water with Causeway Coast Kayaking Tours. Grab a bite at The Red Door Cottage Tea Room & Bistro.