If you’re debating staying in Portrush in Antrim, you’ve landed in the right place.

This scenic little coastal town is home to plenty of things to see and do and it’s also a short spin from some of the best attractions the Causeway Coastal Route has to offer.

Throw in lots of great restaurants and some excellent seaside pubs and you’ve everything you need for a memorable weekend by the sea.

Below, you’ll find everything from things to do in Portrush to where to eat, sleep and drink. Dive on in!

Some quick need-to-knows before visiting Portrush in Antrim 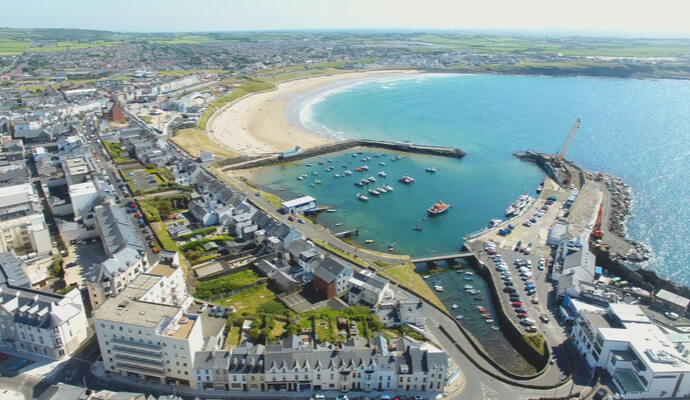 Although a visit to Portrush in Antrim is nice and straightforward, there are a few need-to-knows that’ll make your visit that bit more enjoyable.

Portrush is situated on the Causeway Coastal Route on the north coast of Antrim. Situated on the mile-long peninsula, Tamore Head, it’s just an hour from Belfast and a short drive from the Old Bushmills Distillery and the Giant’s Causeway.

This lively town is finely plonked right by the sea with plenty of amusements, pubs and restaurants on offer. The big draw are the three golden sandy beaches (see our Portrush Beach guide).

Portrush is ideally located for exploring some of the best things to do in Northern Ireland. As well as attracting many golfers, Portrush is ideal for beach lovers, surfers, walkers and fishing trips. Within 10-15 minutes there’s Portstewart, the Giant’s Causeway and the Old Bushmills Distillery as well as plenty of coastal walks.

This quiet community is home to the world-famous Royal Portrush Golf Club. Opened in 1888, it has two 18-hole courses: Dunluce Links championship course and the Valley Links. 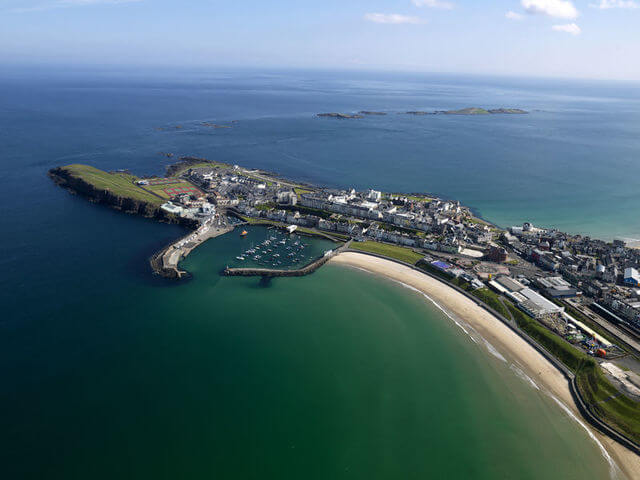 This small coastal town swells with summer visitors, both from Ireland and overseas. It’s one of the nearest towns to the Giant’s Causeway and the Bushmills Distillery.

The Blue Flag waters offering swimming, surfing and miles of walks along the edge of the waves. The coastline is backed by white limestone cliffs that are riddled with sea caves (and gave Whiterocks Beach its name!)

The town itself is a cluster of family-owned businesses, shops and pubs. Whether you want to sup a pint of Guinness, sample the freshest fish and seafood, or listen to local entertainment, there’s plenty of choice.

Portrush has a promenade for walking and cycling and traditional amusements. Fishing trips set sail each morning so you can catch your dinner fresh from the sea and have a great day’s fishing too.

Things to do in Portrush

So, we have a dedicated guide on the best things to do in Portrush, but I’ll give you a quick overview of our favourite attractions.

Below, you’ll find everything from Whiterocks Beach and Barry’s Amusements to Bushmills and plenty of walks and scenic drives.

1. Head for a stroll along Portrush Whiterocks Beach 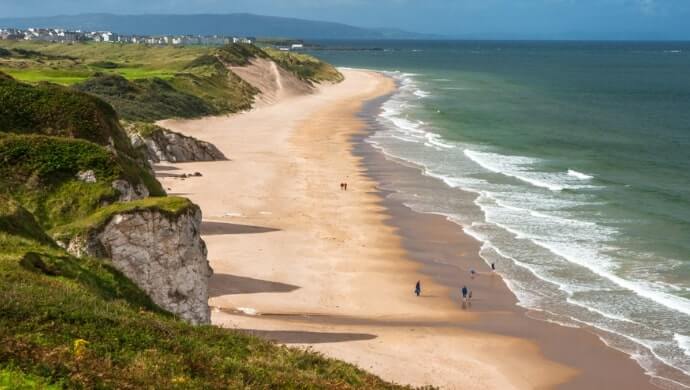 Located on the west-facing side of the peninsula, Whiterocks Beach is truly amazing. It combines dramatic scenery with excellent waters for swimming and surfing.

It is named after the white limestone cliffs that run along the Causeway Coastal Route from East Strand to Dunluce Castle.

Caves and arches include Shelagh’s Head, the Wishing Arch, Elephant Rock and Lion’s Paw. Surfers and body-boarders flock to this life-guarded beach in the summer. Equipment rentals and lessons are available seasonally.

The Causeway Coastal Route has 9 scenic routes through the scenic landscape stretching from Carrickfergus to Limavady. Drive, hike or cycle your way along enjoying the sights.

Visit (and sing about) the Nine Glens of Antrim, admire Slemish Mountain and walk the famous Gobbins Cliff Path.

Portrush is towards the west end of the Causeway Coastal Route, close to the 26-mile Bann Valley Scenic Route and the 20-mile Binevenagh Scenic Route. 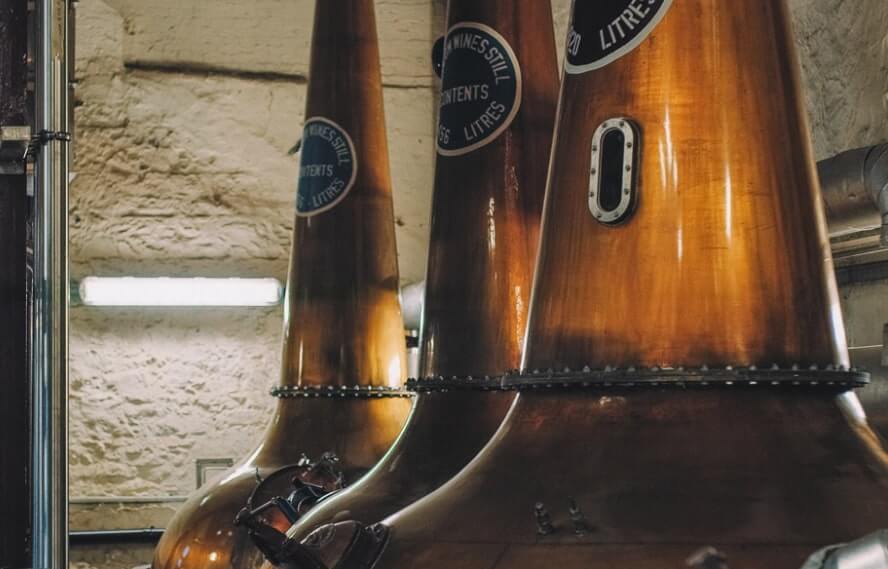 Whiskey lovers will enjoy a tour of the Old Bushmills Distillery just 10 minutes from Portrush. These whitewashed cottage accommodates the oldest licensed distillery in Antrim which dates back to 1608.

Prebook one of the tutored tours and tastings for the full experience. Watch the whiskey making process, learn some secrets and enjoy a wee taster or two. It’s a fascinating experience ending in the gift shop where there are souvenirs a-plenty.

4. Follow in the footsteps of golfing greats at Royal Portrush Golf Club

Book yourself a tee-time and play a round in the steps of some of the greatest golfers in the world. In 2019, the Royal Portrush Golf Club hosted the 148th Open Championships when thousands of spectators watched some of the biggest names in golf play the course.

In case you were wondering, it was won by Irish-born golfer, Shane Lowry who set a new course record of 61. Beat that!

5. Get the adrenaline going at Barry’s Amusements

Barry’s Amusements is a Portrush landmark and once employed actor James Nesbitt! Located above West Strand Beach it has been entertaining visitors for over 90 years.

Free to enter, you can purchase tokens for rides at 50p each. The amusement park has 15 top attractions including two roller coasters, a water slide, helter skelter, caterpillar, Express Train, dodgems and carousels. For more thrills, don’t miss the white-knuckle Extreme Orbiter and the Airborne Shot!

6. Hop and Jump on the Giant’s Causeway 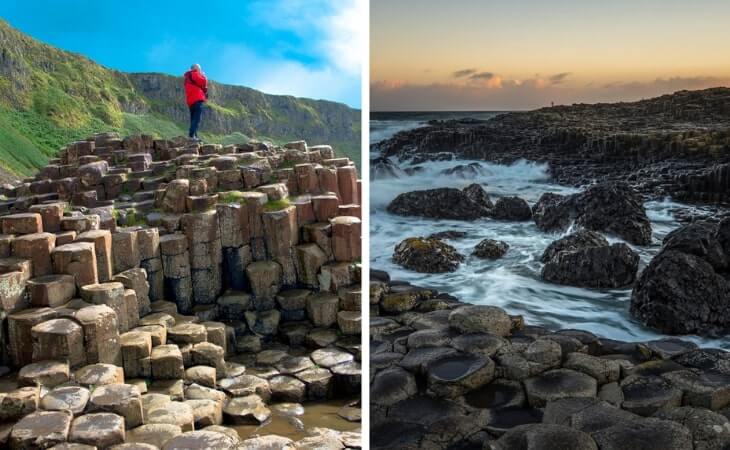 Thousands of basalt pillars making up the Giant’s Causeway are a must-see but there’s some dispute over the origins.

Legend attributes it to being the stepping stones of hunter-warrior Fionn MacCumhaill while others believe was created by volcanic fissure eruptions over 50 million years ago.

Either way, it was the first UNESCO World Heritage Site in Northern Ireland. There’s a Visitor Centre, exhibition and 11 miles of hiking paths from the site. 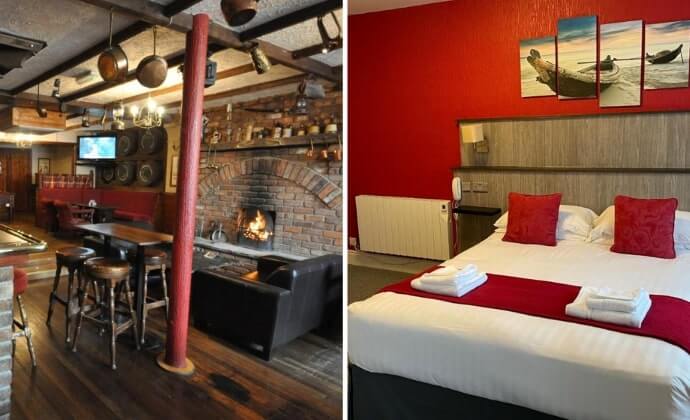 If you’re thinking about staying in Portrush in Antrim (if you’re not, you should!), you’ve a pick of places to stay.

We go through accommodation in depth in our Portrush hotels guide, but here’s a quick overview of what to expect.

There’s a good choice of hotel accommodation in and around Portrush. From quaint hotels on the Main Street in Portrush to upscale hotels overlooking the Atlantic, there are some great hotels to choose from. Family-run hotels include some with 4 star luxury. For golfers, look no further than the Golf Links Hotel just a short walk with your clubs to the golf course.

Portrush has an abundance of pleasant B&Bs that welcome singles, couples and families. Choose one close to the beach and enjoy being within walking distance of the fresh sea air and fun on the beach. Most B&Bs include a hearty cooked breakfast to set you up for a day’s hiking, surfing and exploring this beautiful coastal area.

Places to eat in Portrush 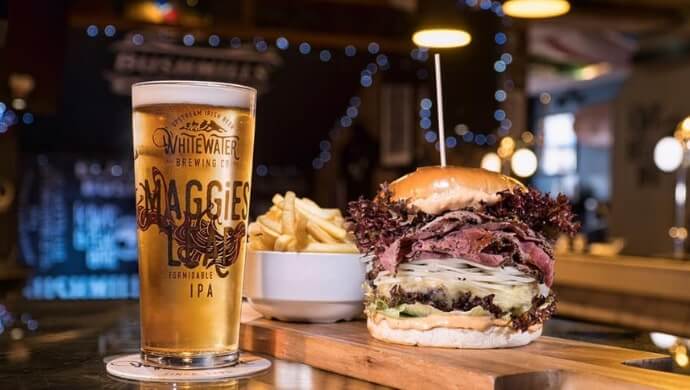 Although we go into the town’s food scene in depth in our Portrush restaurants guide, you’ll find the best of the bunch (in our opinion!) below.

This family-run café is the place to start the day with freshly made pancakes, crepes, waffles and all the trimmings. Located on Eglinton Street in Portrush, it’s a local favourite. Fresh kinder scones with raspberry and white chocolate drizzle, banoffee treats, iced buns and handmade sponge cakes with buttercream make this the prefect place for afternoon tea.

Situated in the heart of Portrush on Dunluce Ave near West Strand, the Urban Restaurant is in a modern contemporary building with a vibe to match. Everything is chef-prepared including perfectly cooked salmon, prawns and chilli chicken. The menu includes wine, whiskey and daiquiris as well as local meat, fresh seafood, pasta and scrumptious desserts.

Kiwi’s Brew Bar is the home of Craft Beer on the North Coast. It has strong links with many artisan breweries and pulls pints you simply can’t find anywhere else. The “Meet the Brewer” nights are popular with beer drinkers but they also serve cider, gin and wine. Located on Portrush Main Street, it’s a lively gastropub known for its tasty burgers and pizzas. 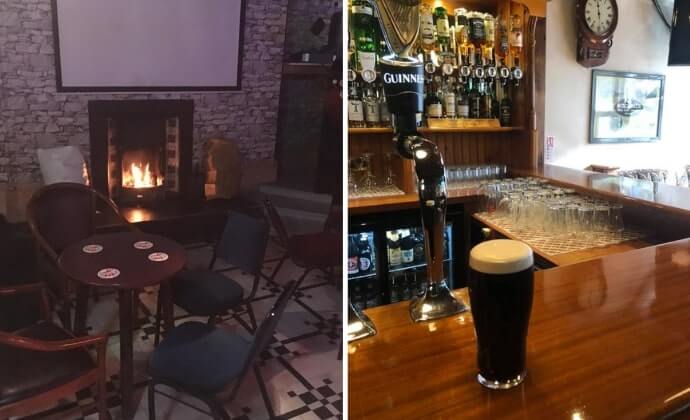 There’s some mighty pubs in Portrush that are perfect for a post-surf pint with friends. Below, you’ll find three of our favourites.

With its traditional frontage and warm atmosphere, the Springhill Bar is all about drinks with mates and plenty of craic. Gather at the bar and chat with locals or warm your toes in front of the cosy open fire. Trad music nights include live bands, acoustic artists, DJs and a juke box. Major sports are shown on the large projector screen so you won’t miss a match.

With its harbour views and live music, the Harbour Bar offers a classic no-frills pub experience in Portrush. It’s part of the famous Ramore Restaurant complex and is one of the oldest pubs on the north coast. You can expect an expertly pulled pint and a warm welcome from landlord Willie Gregg. The upstairs Gin Bar serves premium spirits and wood-fired snacks.

You’ll find live music almost nightly at the Atlantic Bar which sits on Atlantic Avenue in the centre of the shops. There’s a good choice of beer, courteous staff and a pleasant atmosphere. Open daily from 11.30am until 1am, this lively bar offers plenty of nightlife and serves tasty food cooked fresh to order.

FAQs about visiting Portrush in Antrim

Since mentioning the town in a guide to Portrush that we published several years ago, we’ve had hundreds of emails asking various things about Portrush in Antrim.

Is Portrush worth visiting?

Yes! Portrush is a scenic town that’s close to some of the best places to visit in Antrim. There’s plenty to do in the town and there’s loads of places to eat.

Is there much to do in Portrush?

The three beaches are arguably the towns biggest attractions, however, there’s also the world-famous golf club, Barry’s Amusements and lots of nearby attractions.

Are there many pubs and restaurants in Portrush?

Yes! There’s a good mix of casual places to eat and fancier spots for a bite in the town. There’s also several great, traditional style pubs on offer.