The often-missed Ballysaggartmore‌ Towers are one of the more unusual places to visit in Waterford.

The Towers were built in 1834 by Arthur Kiely-Ussher for his wife. Alas! He ran out of money, and the ornate gate was the only part of the Castle to be built.

The family then lived in a small castle on the grounds, which has since been demolished, and it is not open to the public.

In the guide below, you’ll find the history of the area along with a breakdown of the wonderful Ballysaggartmore‌ Towers walk.

Some quick need-to-knows before you visit Ballysaggartmore Towers 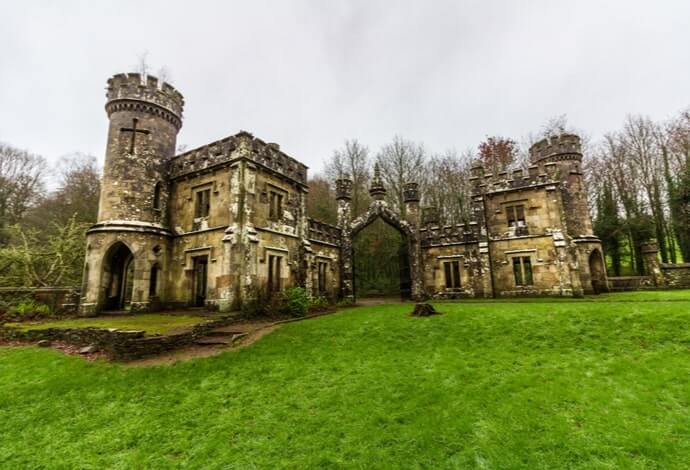 Although a visit to Ballysaggartmore‌ Towers in Lismore is fairly straightforward, there are a few need-to-knows that’ll make your visit that bit more enjoyable.

The Towers are set in gorgeous woodland on the former Ballysaggartmore Demesne, about 2.5 kilometres from Lismore in County Waterford. If you’re visiting Lismore Castle, simply follow the signs for the Towers.

There’s a small car park at the entrance to the Towers (see it here on Google Maps). Now, you’ll rarely struggle to get a space here, but it tends to be busier at the weekends.

The Ballysaggartmore Towers walk is an easy loop of about 2km, but it’s through gorgeous woodland with the magical sound of birdsong all around. You’ll find a full overview of the walk below.

The story behind the Ballysaggartmore Towers

Arthur Keily-Ussher had a jealous wife. She was jealous that her brother-in-law had a nicer/bigger/better castle than Arthur, so she set about getting Arthur to build one just as grand or better.

They already had a house on the estate, but that wasn’t good enough for her Ladyship. Don’t feel sorry for him – he wasn’t a nice man. In fact, he’s probably better known around Waterford for his awful treatment of his tenants during the Great Famine than for the Folly that is the Ballysaggartmore Towers.

Keily-Ussher had about 8,000 acres, 7,000 acres farmed by tenant farmers and the rest he kept as a demesne around his house. In 1834 work began on an elaborate carriageway, two gate lodges and the vast gates and towers with a bridge between.

Once all this was complete, they began to improve the estate. That seems to have consisted mainly of evicting their sitting tenants and demolishing their cottages. The Great Famine arrived, and with it, poverty for the Keily-Usshers.

They began to run out of money and, in the end, they abandoned their plans to build the grandest house in County Waterford. 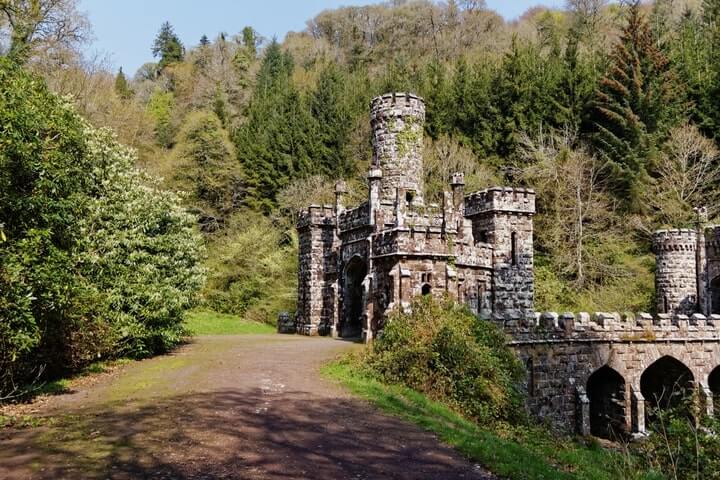 The Ballysaggartmore Towers walk is one of the lesser-known walks in Waterford, and it’s well worth doing if you’re in the area.

It’s a short walk (around 40 minutes or so) but the trail tends to be quiet and it’s a nice escape if you’ve just visited the busy Lismore Castle Gardens.

The walk starts from the car park here and the entrance to the start of the trail is nice and clear from the get-go.

It’s a short walk and it only takes about 40 minutes. However, it’s a magical place, and if you have children, they will love it, so you might want to take your time. Combined with the Towers, it’s reminiscent of a setting for a fairy tale

Muck and a waterfall

It can be a bit mucky underfoot if it’s been raining, so a pair of walking shoes are advisable, and if you stop at the little waterfall with the kids, a spare set of socks is a good idea. The path is well signposted, and there are lots of benches along the way where you can sit and enjoy the orchestra that is the birdsong.

Things to do near Ballysaggartmore Towers

One of the beauties of Ballysaggartmore Towers is that they’re a short spin away from some of the best things to do in Waterford.

Below, you’ll find a handful of things to see and do a stone’s throw from the towers (plus places to eat and where to grab a post-adventure pint!). 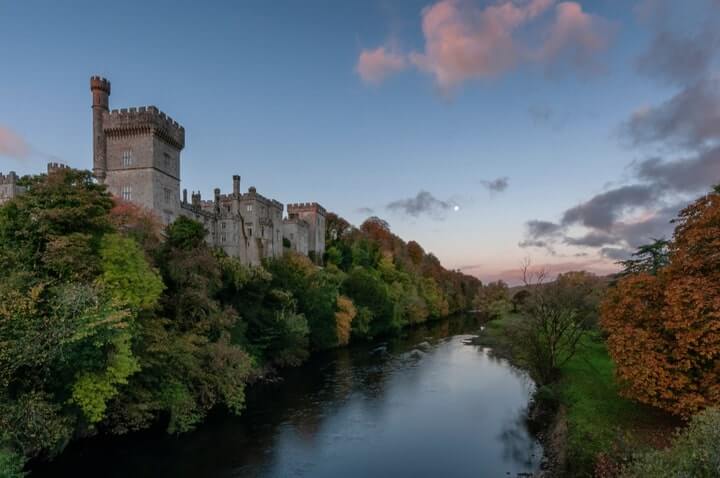 The historic gardens of Lismore Castle are set on 7 acres within the 17th-century walls of the Castle. They are really 2 gardens as most of the lower garden was created in the 19th Century while the upper, walled garden was constructed in 1605. The layout today is much the same as it was then. The gardens are thought to be the oldest, constantly cultivated gardens in Ireland. 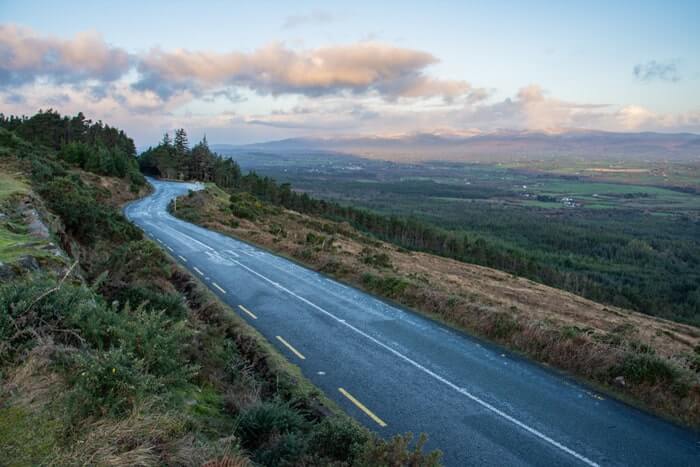 The Vee, a twisting road through farmland and forest that will ultimately provide you with some of the most spectacular views in the country. In late spring or early summer, the hedges are alive with purple rhododendrons. The Vee rises to 2,000 feet above sea level, which provides incredible panoramic views across Tipperary and Waterford.

Set your GPS for Mountain Barrack to reach the starting point for the trail up to Ballard Waterfall. There’s a car park, and an information board and you must read it as you’ll have to go around an electric fence and you need to know what to do. DO NOT try to cross over it. The walk will take you about 1.5 hours and the track is well signposted and takes you right to the gorgeous Ballard Waterfall. 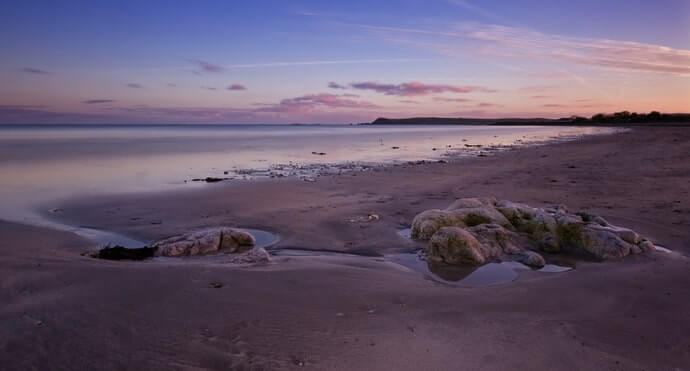 Dungarvan is one of the most popular holiday spots in Ireland. It’s a great base location to explore the Waterford Greenway and the Copper Coast from. There’s lots of things to do in Dungarvan and there are also some great restaurants in Dungarvan, if you’re feeling peckish.

We’ve had a lot of questions over the years asking about everything from where to park at the tows to how long the walk takes.

How long is the Ballysaggartmore Towers walk?

You’ll want to allow around 40 minutes to complete the walk, and longer if you fancy linger on to explore the area at a slow pace.

Is there parking near Ballysaggartmore Towers?

Yes – there’s a little parking area literally on the road right in front of where the trail begins.

Are the towers worth visiting?

I wouldn’t recommend travelling from afar to visit them but, if you’re in the area to see Lismore Castle, they’re well worth a detour.